New Zealand is extending the duration of cuts in fuel excise tax, road user charges and public transport fares by five months until the end of January, as families struggle with higher living costs amid strong inflationary pressures.

New Zealand petrol prices, like elsewhere, have risen sharply since Russia’s attack on Ukraine started in February, contributing to significant inflation. Food prices rose 1.2 per cent in June, while they rose 6.6 per cent from the same month last year. 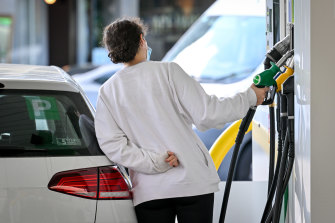 New Zealand will continue its cut to fuel excise until 2023.Credit:Eddie Jim

“There’s no easy fix for the cost of living, but we’re taking a range of actions to ease the pressure on families,” Finance Minister Grant Robertson said.

“We want Kiwis to have some certainty over the coming months in the face of volatile prices at the pump.”

The New Zealand government in March cut the fuel excise tax by 25 cents a litre and road user charges – a charge levied on diesel vehicle users – by as much for three months.

Australia followed a fortnight later, with then prime minister Scott Morrison using his pre-election budget to slash fuel excise by 22 cents a litre. That reduction is due to finish in late September.

Half-price public transport fares, also introduced in March, will continue until next year.

The Treasury estimates the combined impact of the policy will reduce headline inflation by 0.5 percentage points in the June quarter, Robertson said.

But he warned inflation would likely “stay for some time at levels higher than we have seen in recent years” even as economists forecast it would peak in the June quarter.

On Wednesday, the Reserve Bank of New Zealand delivered its sixth straight interest rate rise and signalled it remained comfortable with its planned aggressive tightening path to restrain runaway inflation.