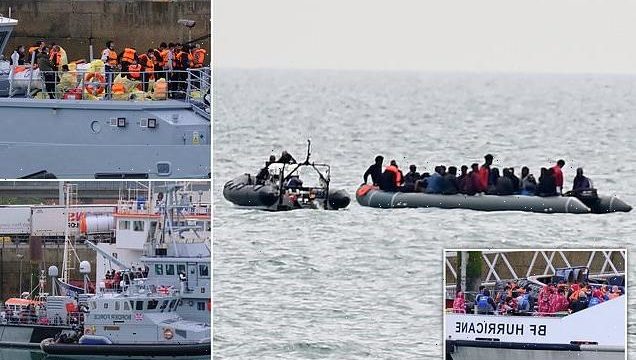 More migrants crossed the Channel on Saturday than on any previous single day – amid claims France has ‘lost control of the border’.

A record-breaking 828 people had to be rescued or intercepted making the dangerous 21-mile journey in 30 boats.

The Home Office finally confirmed the figures on Monday evening, some two days after the influx of arrivals.

And it also makes it the busiest weekend of migrant crossings ever – surpassing the 571 who arrived on July 10 and 11.

It is the fifth time this year the figure has been higher than 2020’s record day of 416 migrants. 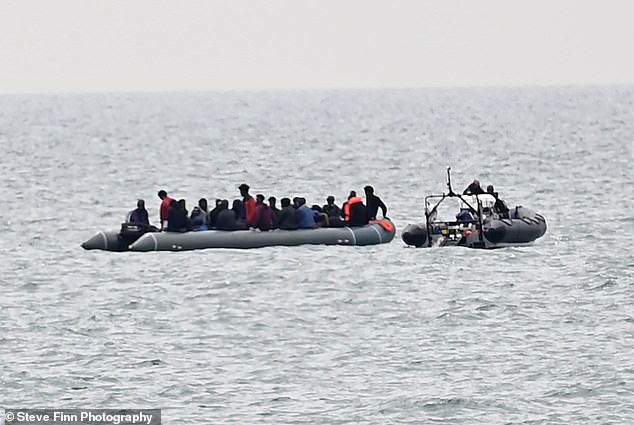 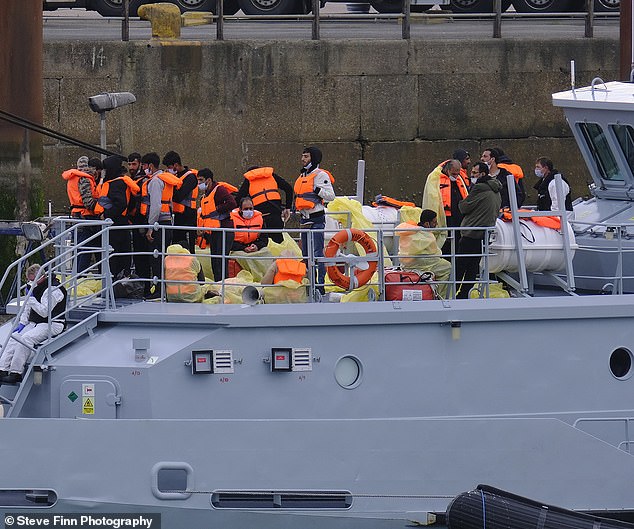 A record-breaking 828 people had to be rescued or intercepted making the dangerous 21-mile journey in 30 boats. Pictured: Migrants are brought ashore in Kent on Saturday

More than 12,000 migrants have now crossed the Dover Strait, one of the world’s busiest shipping routes, by boat this year.

Dover and Deal MP Natalie Elphicke claimed France had ‘lost control of their side of the border’.

She said last night: ‘It increasingly looks like the French have lost control of their side of the border.

‘An urgent, fresh approach is needed for the British and French to work together to stop boats leaving in the first place, turn them around and make returns.

‘With the crisis in Afghanistan, it’s more important than ever that these illegal routes are closed down and safe, legal, routes prioritised.

‘We cannot risk of a return of the squalid and dangerous camps of Sangatte and the Calais Jungle.’

The Home Office confirmed no migrants arrived on Monday or on Sunday as the brief gap in poor sea conditions quickly closed with stormy weather settling in.

They also claimed French authorities prevented 193 people from making the crossing in 10 boats. 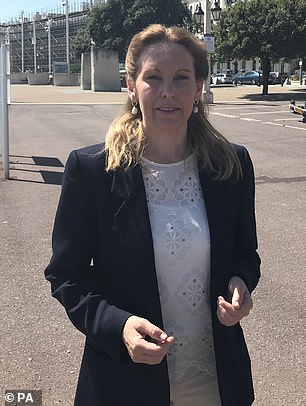 Dan O’Mahoney, Clandestine Channel Threat Commander, said last night: ‘These dangerous crossings from safe EU countries are completely unnecessary and we are determined to take down the evil criminal gangs behind them.

‘We’re working across Government as well as with French and International partners to tackle this issue.

‘We have doubled the number of police officers on French beaches, prevented more than 10,000 attempts, secured nearly 300 arrests and 65 prosecutions.’

‘The Government’s New Plan for Immigration will fix the broken asylum system so it can no longer be exploited in this way.’

Saturday proved to be the busiest day on record for UK search and rescue authorities dealing with migrants in the Channel as Border Force continued to process them at the docks in pitch black darkness as late as 10pm.

On top of the continuous flow of migrants being brought into Dover Marina, many boats are believed to have landed along the South East coastline.

There were two reported landings in Folkestone, one in Broadstairs, another in Dungeness – all in Kent – and two more in Rye and Hastings, both in East Sussex.

More than 20 people jumped off a grey RHIB and ran along the sand at Stone Bay in Broadstairs while around 50 were seen sitting on the shingle at Dungeness Lifeboat Station after being brought to shore by an RNLI lifeboat.

The Home Office said small boat incidents were still being dealt with as late as 8.30pm and would not confirm exact figures until the ‘situation has been resolved’.

It was the first day of crossings in almost a week since 285 people made the dangerous journey on board nine boats last Sunday (August 15).

People smugglers seized upon a break in the bad weather to push multiple boats packed with desperate migrants out to sea.

Border Force brought the first group into Dover Marina, Kent around 8am on board cutter Speedwell.

Immigration Enforcement officers were seen walking the 11 young men, some draped in light blue blankets for warmth and others carrying their possessions in bags, up the gangway for processing.

Border Force catamaran Hurricane then docked around an hour later with 45 migrants on board.

A man wearing a red jacket and a woman wearing a white woolly hat handed their baby boy to officers as they disembarked.

Another woman also got off the boat before 41 young men left the moored search and rescue vessel.

One male migrant appeared to be very elderly and had long grey hair sweeping over his face. 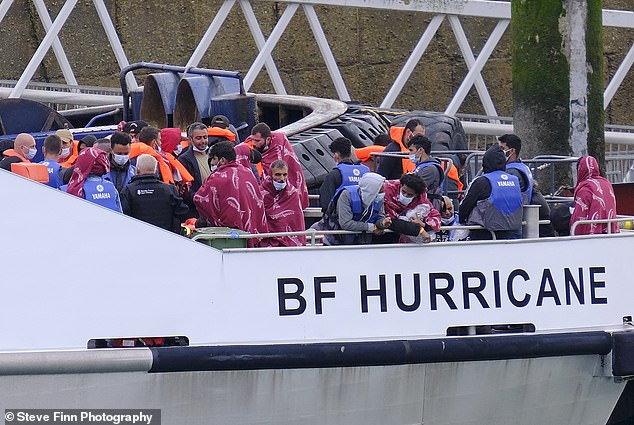 Border Force brought the first group into Dover Marina, Kent around 8am on board cutter Speedwell. Border Force catamaran Hurricane (pictured) then docked around an hour later with 45 migrants on board

The next group of migrants were brought in on Speedwell around half an hour later with 35 people on board.

A family consisting of a father and a mother carrying one small baby, and three little girls – the youngest holding the hand of an Immigration Enforcement officer – walked up the gangway for processing.

Another parent gave a thumbs up as she disembarked with her three young girls and a little boy who were also waving. They were followed by 24 young men.

A large red RHIB was towed into harbour by a Border Force officer on a jet ski followed by another red inflatable and a black vessel.

As Speedwell disembarked around a dozen more migrants – including one woman – the RNLI Dover Lifeboat moored next to it to disembark another group of migrants.

Around 50 people were on board. Women and children were among the many men.

One man held the hands of his two sons as they walked up the gangway followed by two women, one holding the hand of a little girl wearing a pink jacket, and a man carrying a young infant.

Another young boy aged around eight disembarked with his mother.

A mum and dad held the hands of their two young daughters followed by another two couples carrying four children. 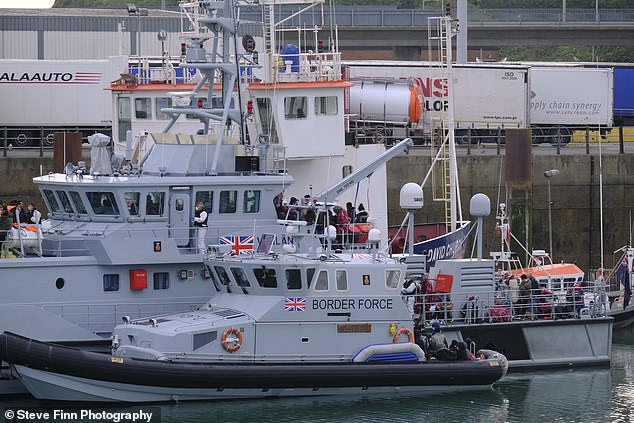 Their red RHIB filled with fuel cannisters, shoes, oars and foot pumps was towed into harbour.

By 1pm, at least 150 migrants were thought to have been brought into the docks according to onlookers monitoring activity in the Channel off the Kent coast.

French authorities stated they rescued a 102 migrants in the Channel on Saturday and returned them back to France.

National Society for Rescue at Sea all-weather canoe President Jacques Huret picked up 38 migrants who got into difficulty off Boulogne.

Maritime affairs patroller Thémis saved four people who were spotted by the Delft Seaways ferry in difficulty in the Dyck area.

The Merlimont beach station then reported a boat of migrants in difficulty off Hardelot. Themis recovered two people while rescue tug Abeille Languedoc rescued another 58.