Victoria’s Supreme Court has been asked to reopen one of the gangland war’s most notorious episodes – the slaying of crime patriarch Lewis Moran – after fresh evidence cast doubt on a 12-year-old murder conviction.

Evangelos Goussis, a one time aspiring Olympic boxer who is serving a life sentence for two gangland murders, has lodged a new appeal against his 2008 conviction for the killing of Moran on the basis of information either unknown or concealed from his legal team at the time of his trial. 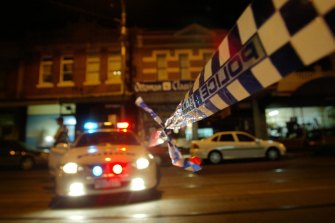 The Sydney Road crime scene on the night Lewis Moran was murdered by a masked gunman inside the Brunswick Club.Credit:Paul Harris

Goussis’ lawyers have summoned Victoria Police Chief Commissioner Shane Patton to provide all relevant information about the involvement of defence barrister-turned informer Nicola Gobbo in his case and secret dealings between police detectives and a career criminal and self-confessed perjurer who implicated Goussis in the 2004 murder.

Despite being a fringe player in the bloody drug feud between the Moran clan and their one-time henchman Carl Williams, Goussis is serving a non-parole term of 35 years in prison – one of the heaviest sentences meted out to any gangland figure.

He was convicted of killing Moran and a second gangland figure, Lewis Caine. Within Melbourne’s underworld, there have long been doubts over whether Goussis committed either of the murders.

On March 31, 2004, Moran was ambushed inside the Brunswick Club by two gunmen wearing balaclavas. He was pursued through the club by one of the assailants and shot dead next to a bank of poker machines. Moran’s friend, Herbert Wrout, was shot and wounded in the same attack. 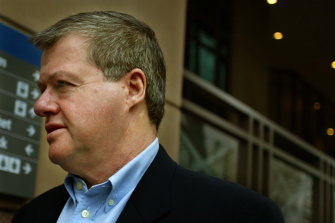 Lewis Moran was gunned down at the Brunswick Club in March 2004.Credit:Angela Wylie

The gang-busting Purana taskforce broke open the case in 2006 when Goussis’ mentor at the time, an older criminal with a lengthy history of violent offences including multiple homicides, confessed to being the getaway driver and named Goussis as the gunman who killed Moran.

The older crook implicated another gangland figure, Noel Faure, as the person who shot Wrout and said the hit on Moran was ordered and paid for by drug baron Tony Mokbel and arranged by Williams. 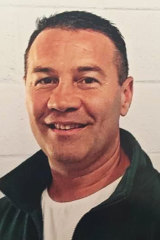 Mokbel was subsequently cleared of any involvement. Faure, Wrout and Williams are all dead.

Goussis in 2011 was refused leave to appeal against his conviction by the Victorian Court of Appeal and the High Court. Victorian law changes prompted by the Lawyer X scandal allow a subsequent appeal on the basis of fresh and compelling evidence. The application now before the Court of Appeal is based on evidence that emerged after Goussis’ previous appellate rights were exhausted.

The new evidence includes a significant change to the story told by Goussis’ mentor about the disposal of a possible murder weapon, contradictory testimony given by the older crook about his own capacity to shoot Moran and a series of recorded conversations between the older crook and police detectives.

During Goussis’ trial, the older crook claimed he was incapable of being the shooter because of an injury to his right hand. He later contradicted this evidence.

Although the revolver used to kill Moran was never found, testimony given by the older crook in another case suggests a gun recovered by police divers near a popular swimming spot could be the murder weapon.

Some new evidence cited in Goussis’ appeal documents emerged after the Moran murder trial; some of it was known by police at the time and not disclosed to his legal team. 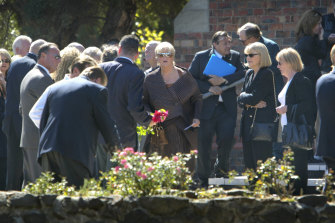 Judy Moran at the funeral of her husband Lewis. Credit:Paul Harris

Counsel for Goussis Paul Smallwood, in a written outline of the grounds of appeal, told the court: “Were this evidence available to the applicant at the time of the 2008 trial the jury would have had a complete picture of the manipulation engaged in by [the older crook].”

Mr Smallwood submitted there had been a “substantial miscarriage of justice”.

Ms Gobbo’s secret life as a police informant emerged years after Goussis’ trial. In 2014, shortly after the Lawyer X scandal broke, Goussis’ principal accuser said that he started co-operating with police after he had been visited by Ms Gobbo

The Royal Commission into the Management of Police Informants examined how Ms Gobbo regularly visited Goussis’ accuser in jail. At the time he implicated Goussis, the older crook was housed alongside two other supergrass witnesses in what Goussis described in a jailhouse letter as the “Deal or no Deal” unit.

When the older crook started co-operating with police, he confessed to shooting Moran. Goussis in a 2019 letter to Victorian Director of Public Prosecutions Kerri Judd, QC, said it was Ms Gobbo who convinced the older crook to change his story and implicate Goussis.

The older crook cannot be identified for legal reasons. Justice Andrew Tinney, a prosecutor in the Moran murder trial and now a Supreme Court judge, has described him as “the most important witness to ever give evidence in … criminal trials in Victoria.”

Goussis, 53, has been in jail since the year Moran was killed. He has served his time for the Caine murder and has always denied any involvement in Moran’s murder. He says that at the time Moran was shot in Brunswick, he was looking after his mother at her home in Fairfield.

Goussis says he believes the older crook killed Moran and framed him for the crime.

Our Morning Edition newsletter is a curated guide to the most important and interesting stories, analysis and insights. Get it delivered to your inbox.