EMOTIONAL King Charles today pledged to follow his beloved mother's selfless duty as he grew tearful during the national anthem.

The Monarch appeared sombre in Westminster Hall as the Speakers of the Lords and Commons paid tribute to the Queen. 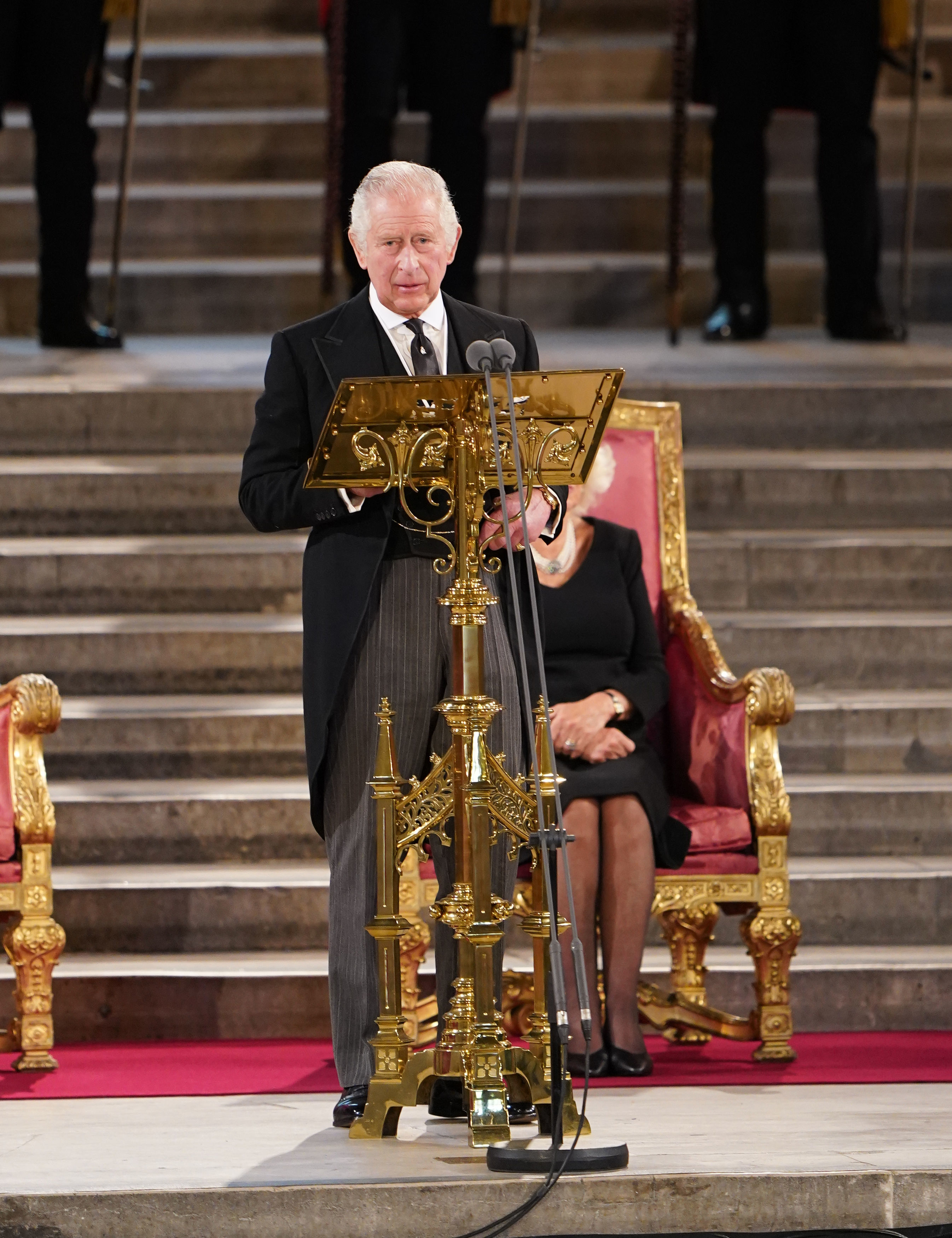 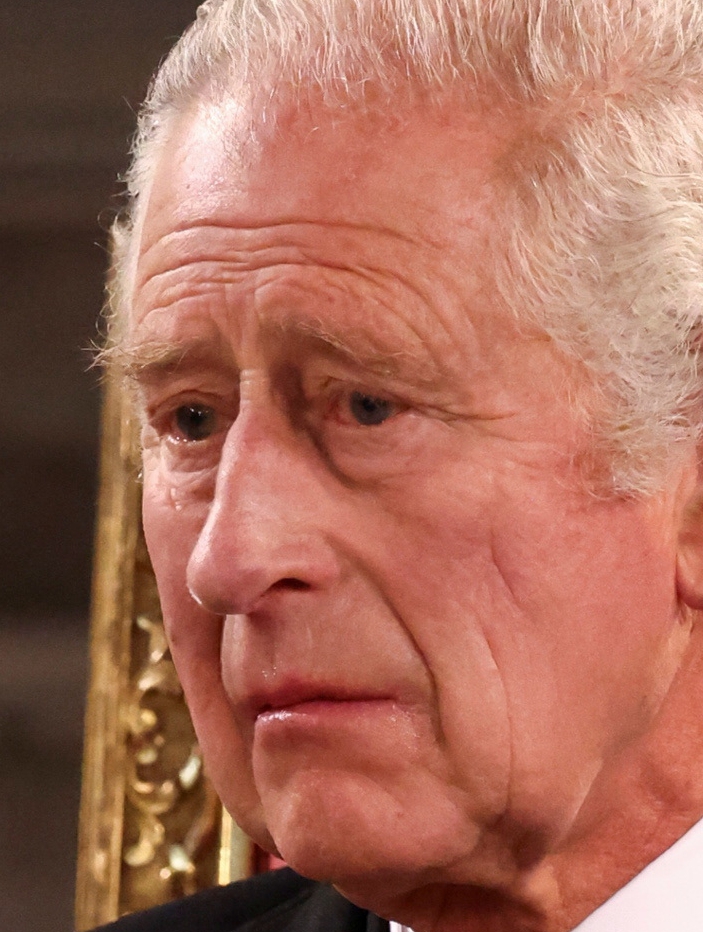 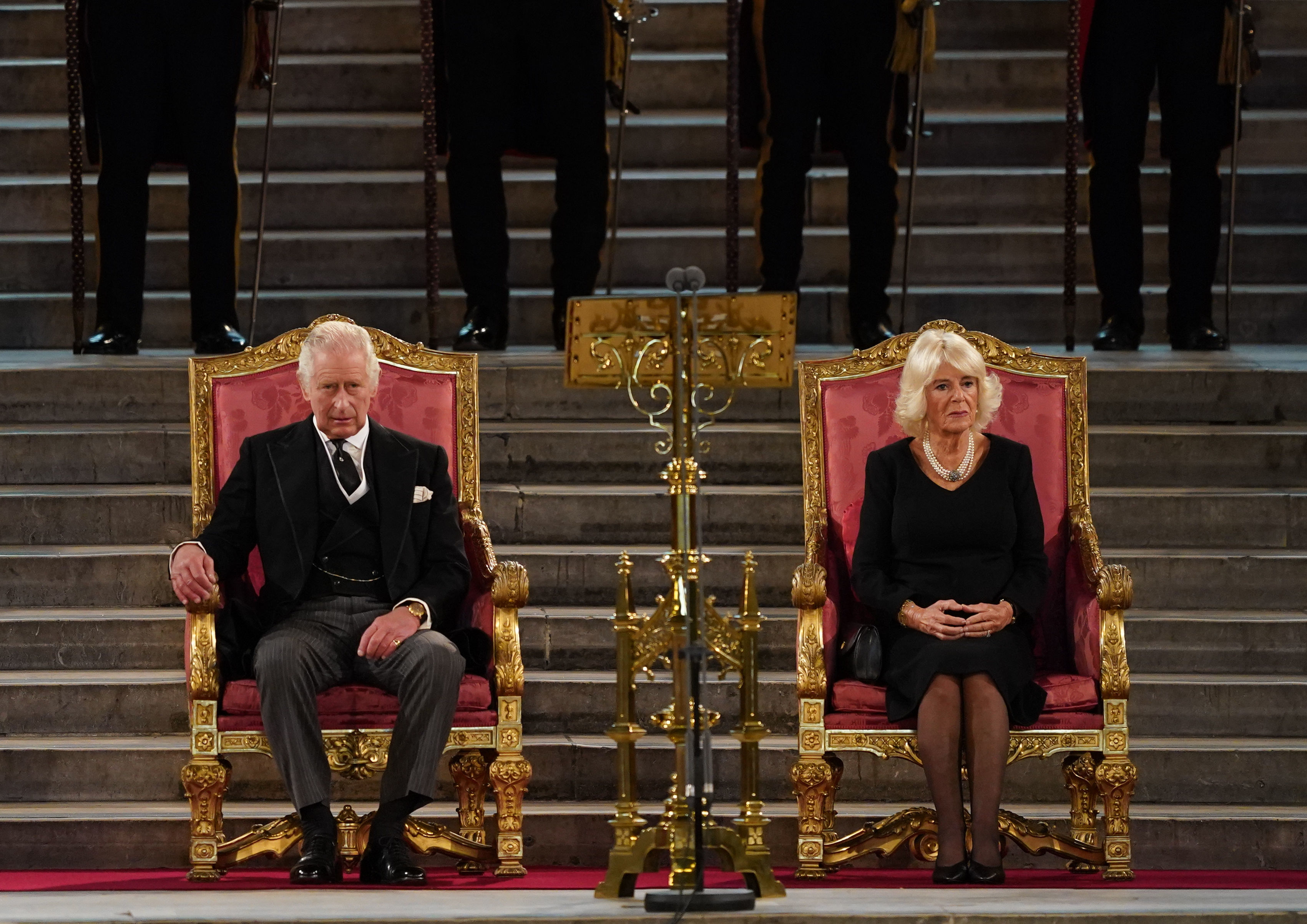 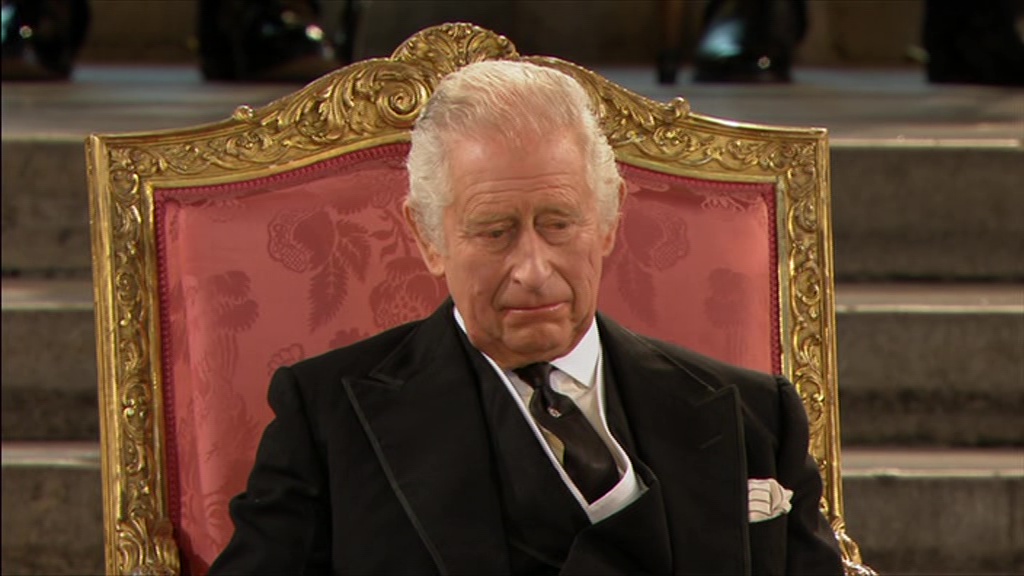 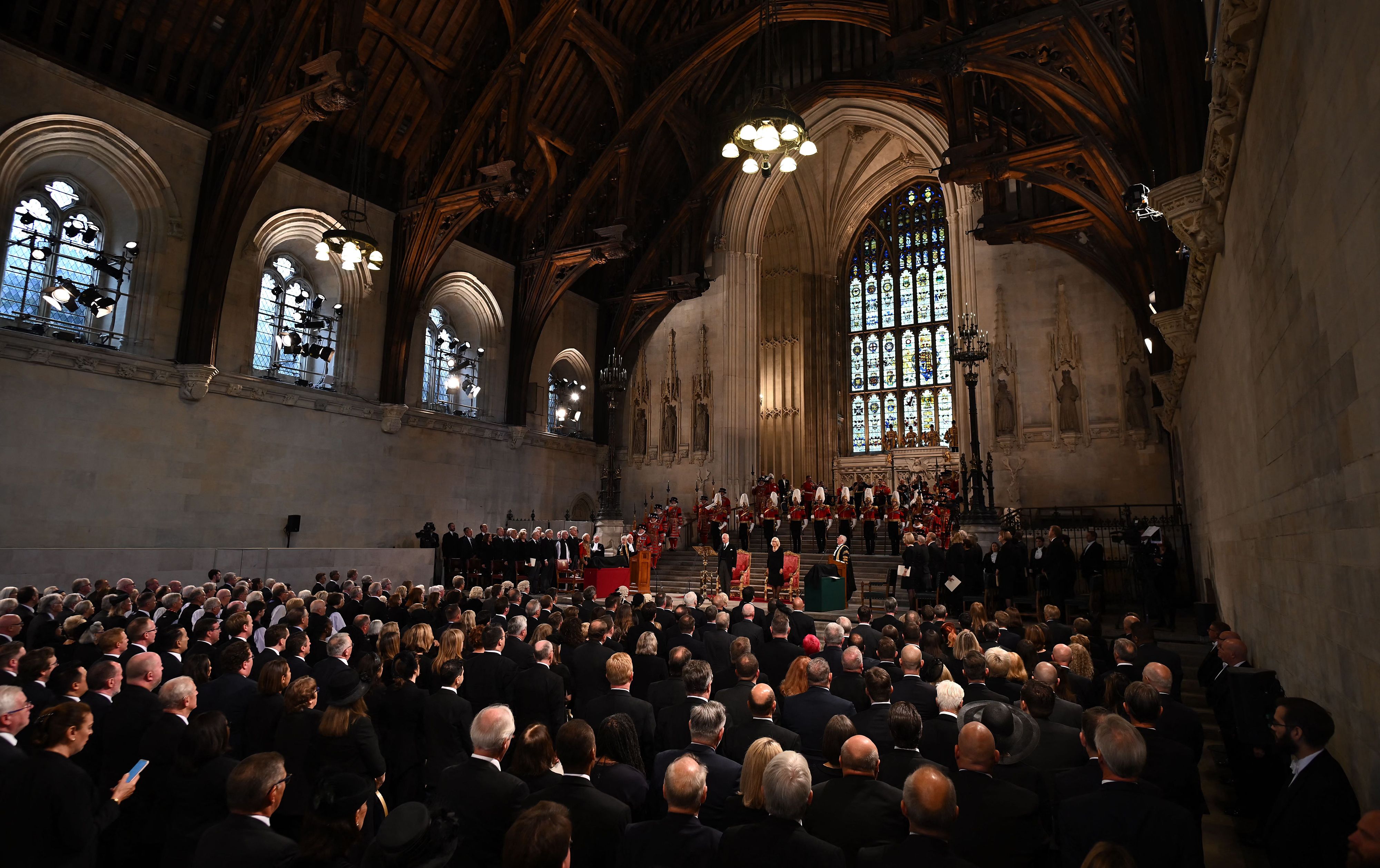 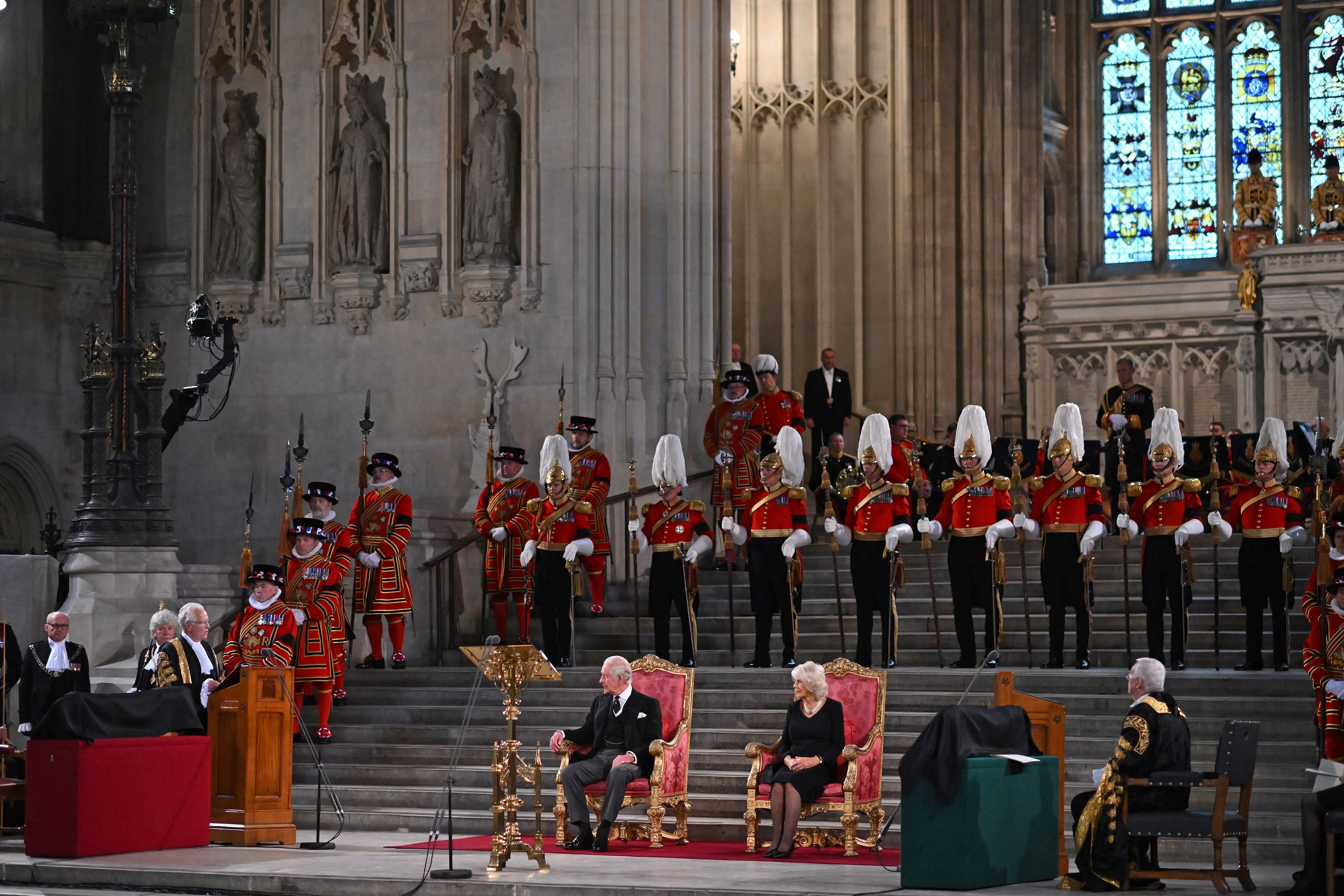 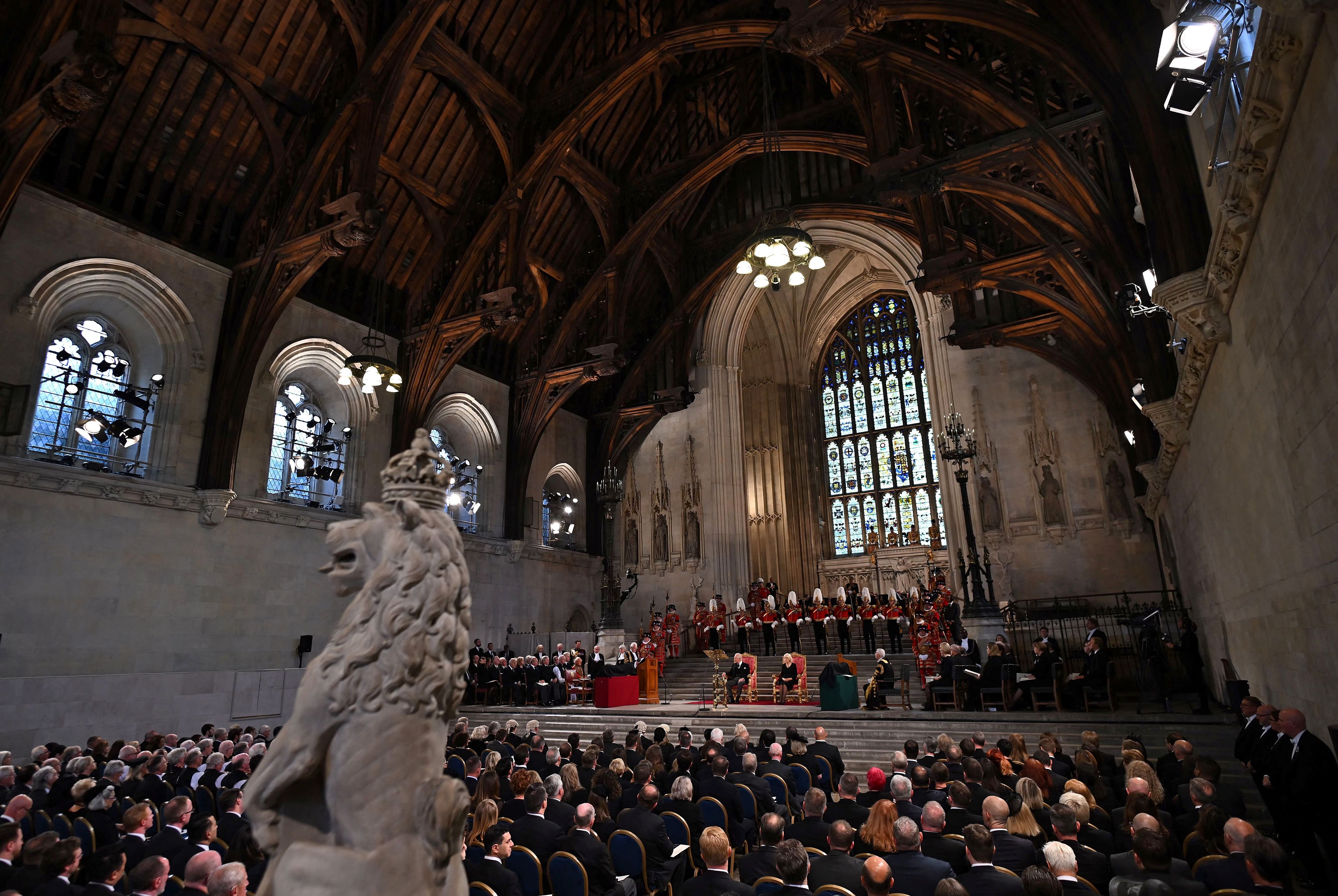 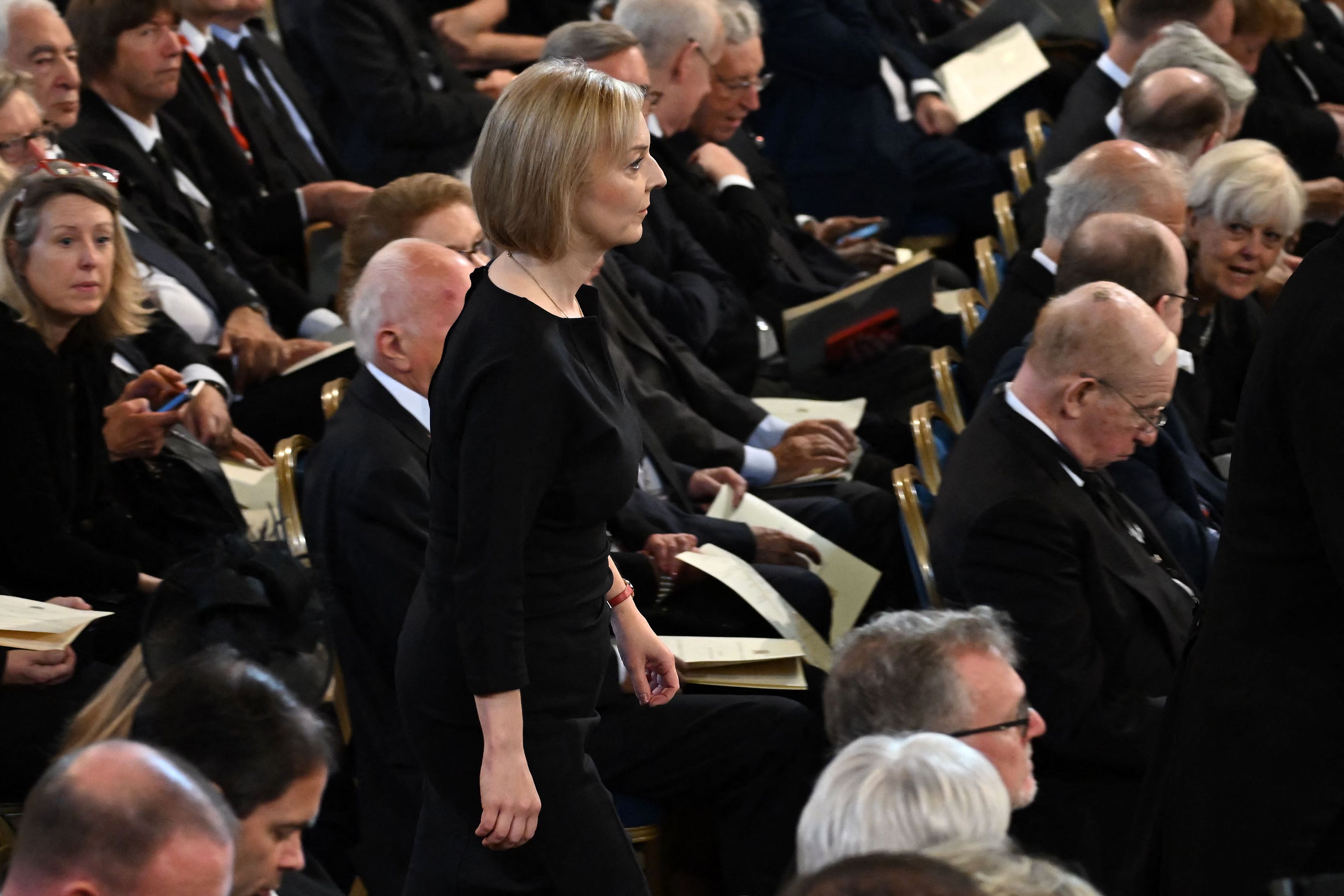 King Charles III praised his mother's unwavering service as he gave an historic address to MPs and Peers.

He said: "We gather today in remembrance of the remarkable span of The Queen’s dedicated service to her nations and peoples.

"While very young, Her late Majesty pledged herself to serve her country and her people and to maintain the precious principles of constitutional government which lie at the heart of our nation.  This vow she kept with unsurpassed devotion.

"She set an example of selfless duty which, with God’s help and your counsels, I am resolved faithfully to follow."

The Monarch also thanked MPs and Peers for their kind words and said they "touchingly encompass what our late sovereign, my beloved mother the Queen, meant to us all".

Following the address, the audience sung a moving rendition of God Save the King that left the Monarch looking emotional. 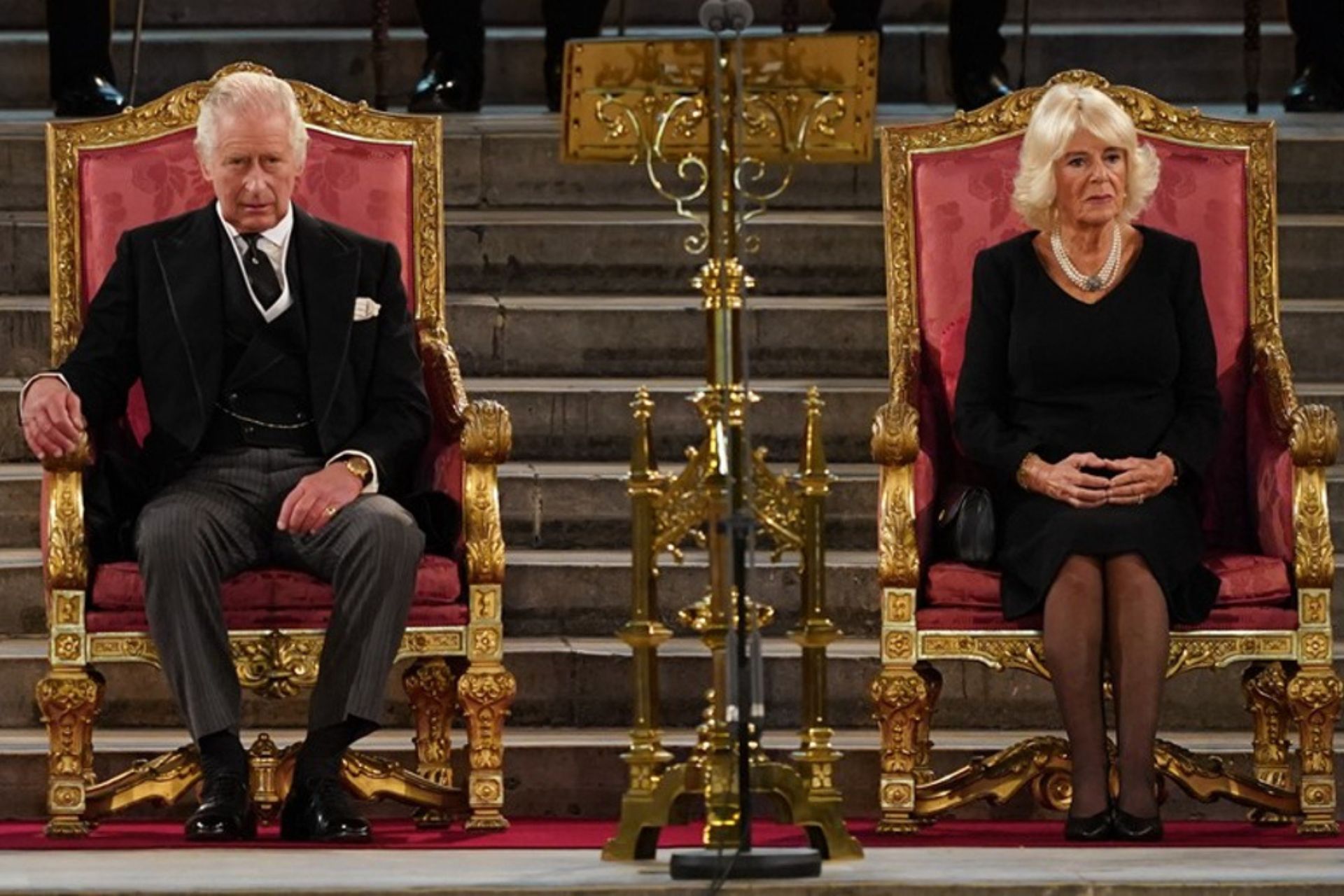 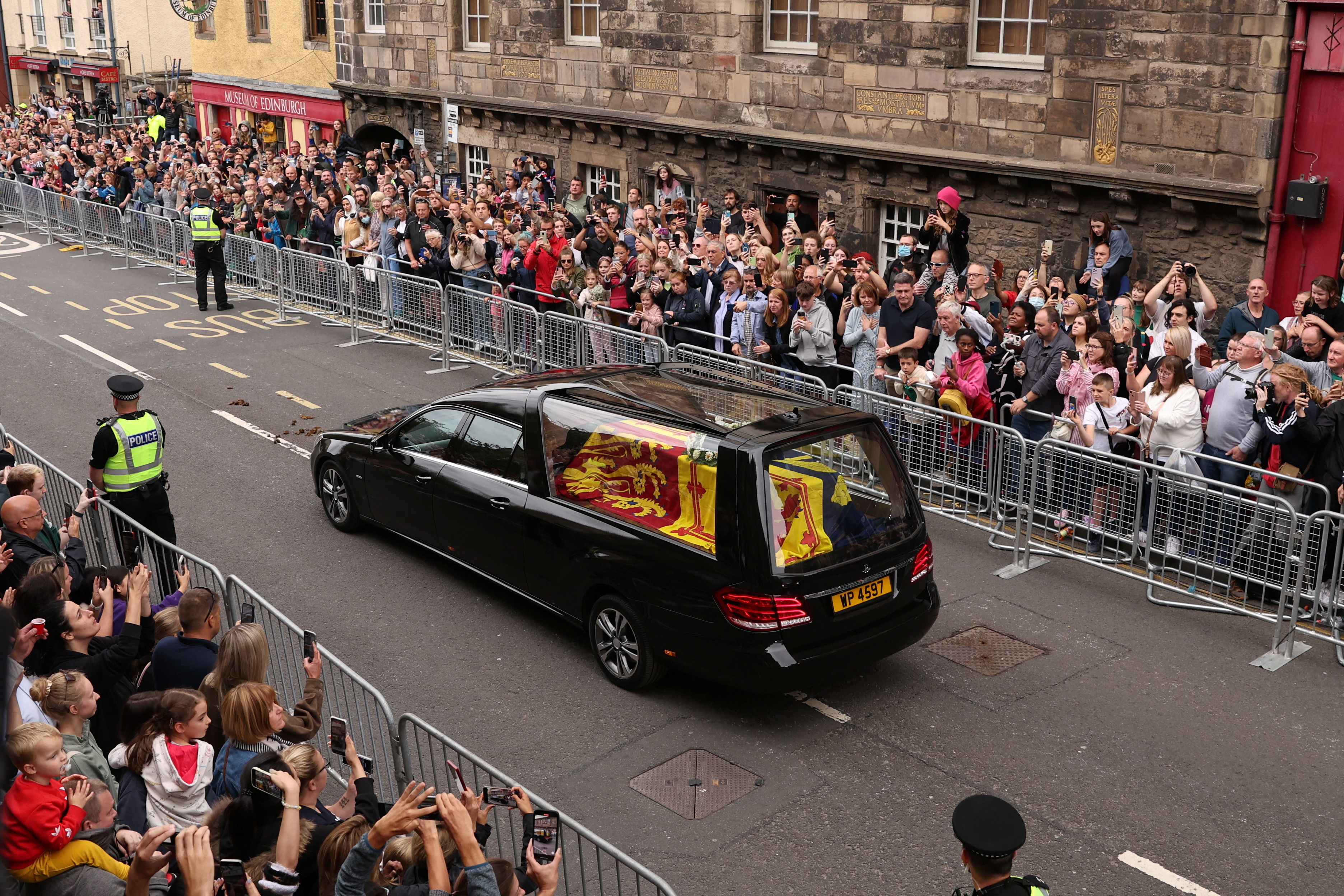 Fanfare trumpets had heralded his arrival at the historic ceremony.

Dignitaries bowed their heads as he passed, smiling and nodding.

He was joined by his wife Camilla, the Queen Consort, as they both sat in golden thrones.

Around 900 Parliamentarians gathered in Westminster Hall to witness the spectacle.

Queen's funeral Bank Holiday rules – will we have to go to work and school?

Lord Speaker Lord McFall of Alcluith paid tribute to the Queen's "inspiring reign of deep and unparalleled devotion" as he pledged loyalty to the new King on behalf of the House of Lords.

Addressing Charles in Westminster Hall, he said: "Your Majesty, I welcome you and Her Majesty the Queen Consort to Parliament today on this solemn occasion.

"Her late Majesty, our treasured Queen and your beloved and deeply missed mother came here to Westminster Hall many times to receive the congratulations of her loyal subjects in the two houses of Parliament and to celebrate with them historic landmarks and her long life of dedicated public service.

"She was both a leader to and a servant of her people. Her humility and integrity commanded the respect and captured the imagination of peoples and nations across the globe."

He added: "Her late Majesty's joyous, unstinting and reassuring presence across the years made it difficult to contemplate that her long and inspiring reign of deep and unparalleled devotion would ever end.

"We and the nation closed our eyes to this inevitability. But it has ended."

Just minutes before the King was due to speak, Prince Harry released a statement paying tribute to the "everlasting grace" and "infectious smile" of his granny.

The Prince said: "I am forever grateful for all of our first meetings – from my earliest childhood memories with you, to meeting you for the first time as my Commander-in-Chief, to the first moment you met my darling wife and hugged your beloved great-grandchildren."

Harry offered an olive branch to his dad as he takes up his new role as monarch.

The Duke of Sussex said: "We now honour my father in his new role as King Charles III".

Westminster Hall, which was built in 1097 under William II, has hosted speeches by esteemed dignitaries including Nelson Mandela and the Pope.

In 2002, the Queen Mother lay in state in the grand building for three days.

Queen Elizabeth will also lie in state from Wednesday this week until the state funeral on Monday.

Members of the public are expected to queue for around 11 hours to view the coffin and pay their respects.

Across Friday and Saturday, MPs and peers delivered passionate tributes to Queen Elizabeth in Parliament.

Liz Truss hailed the late monarch as “one of the greatest leaders the world has ever known”.

After the King addresses Parliament at 10am, he will travel to Edinburgh, where a Ceremony of the Keys will take place at the Palace of Holyrood House.

Following the Ceremony of the Keys, the King will join the procession of the Queen's coffin to St Giles' Cathedral.

Then, the King and the Queen Consort, accompanied by other royal family members, will attend a service of prayer and reflection for the life of the Queen at St Giles' Cathedral.

The PM will jet up to Scotland to join the service.

The King will receive the First Minister of Scotland, Nicola Sturgeon, followed by the presiding officer, at the Palace of Holyroodhouse. 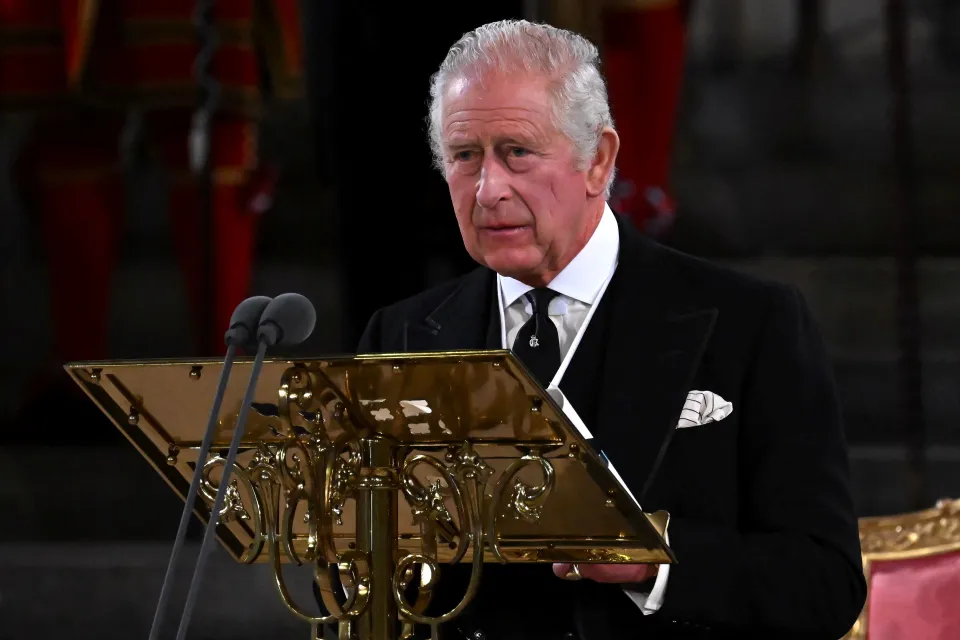 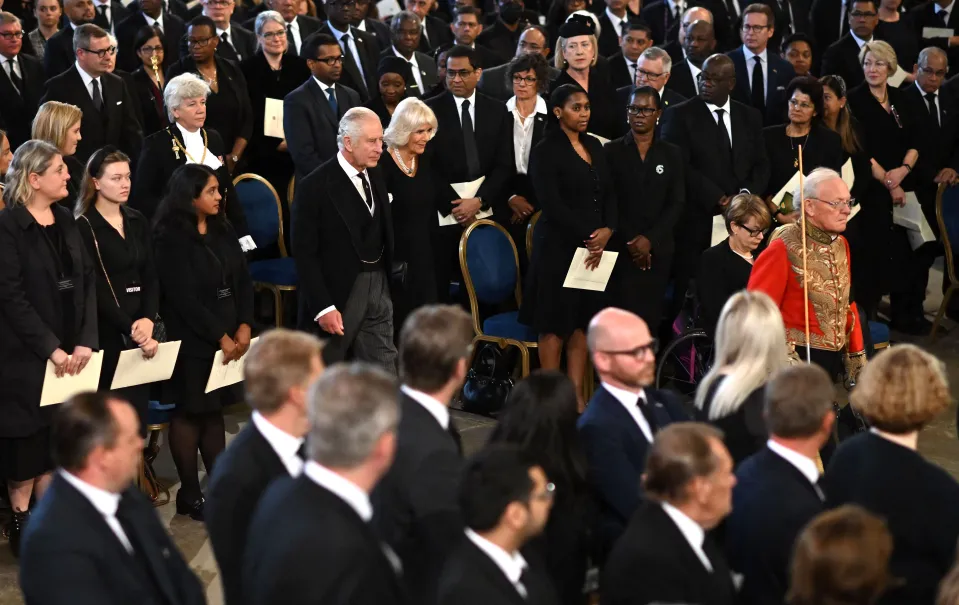 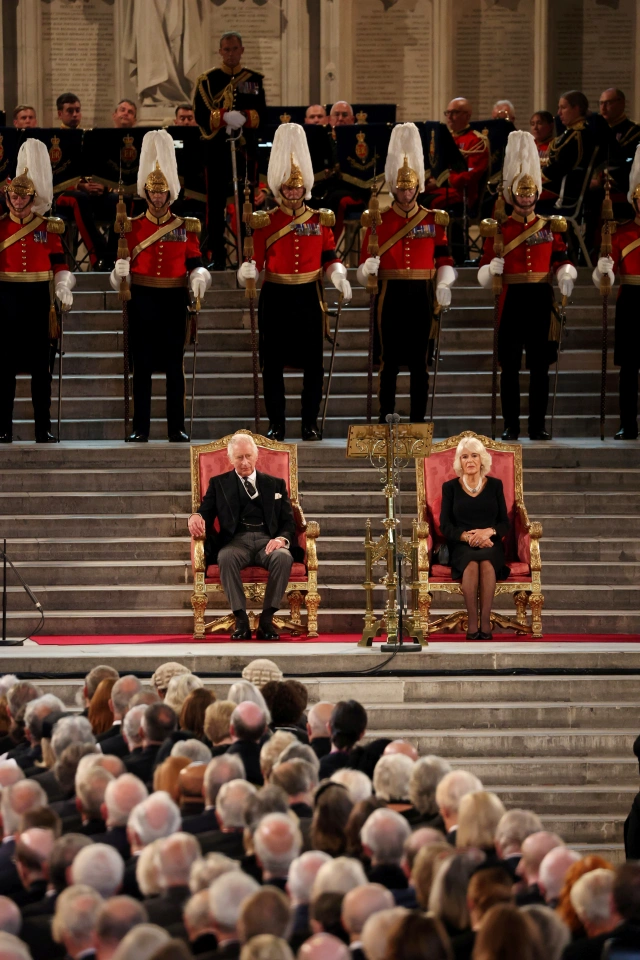 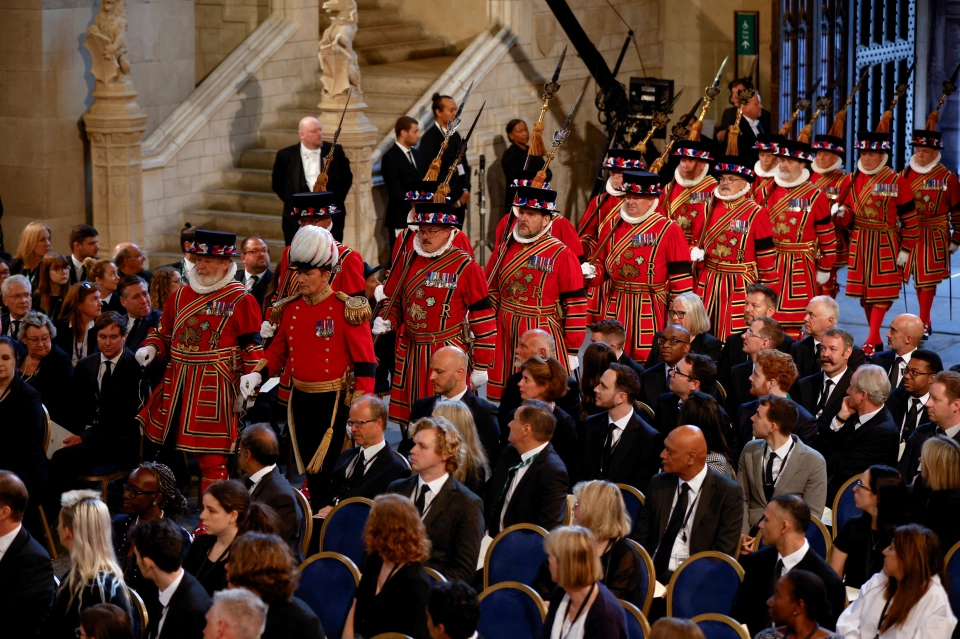 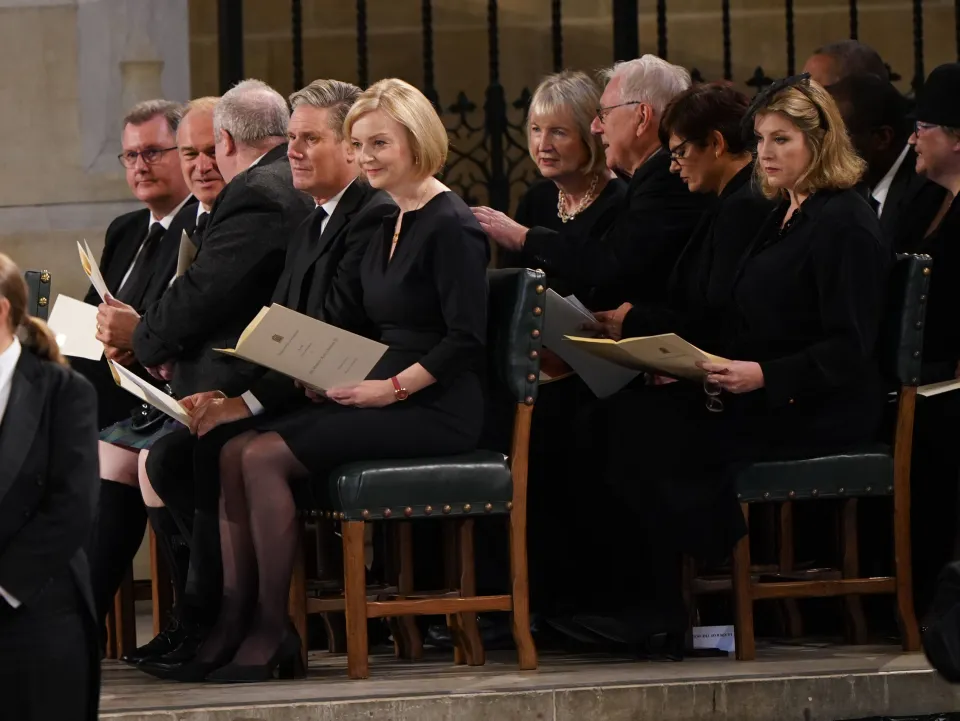