A MUM has described how her son’s milk allergy left him skin blistered head to toe and his poo like acid water.

Charlotte Smallwood, 25, says her baby Arthur screamed in pain and was "inconsolable" for seven months before he finally got the treatment he needed. 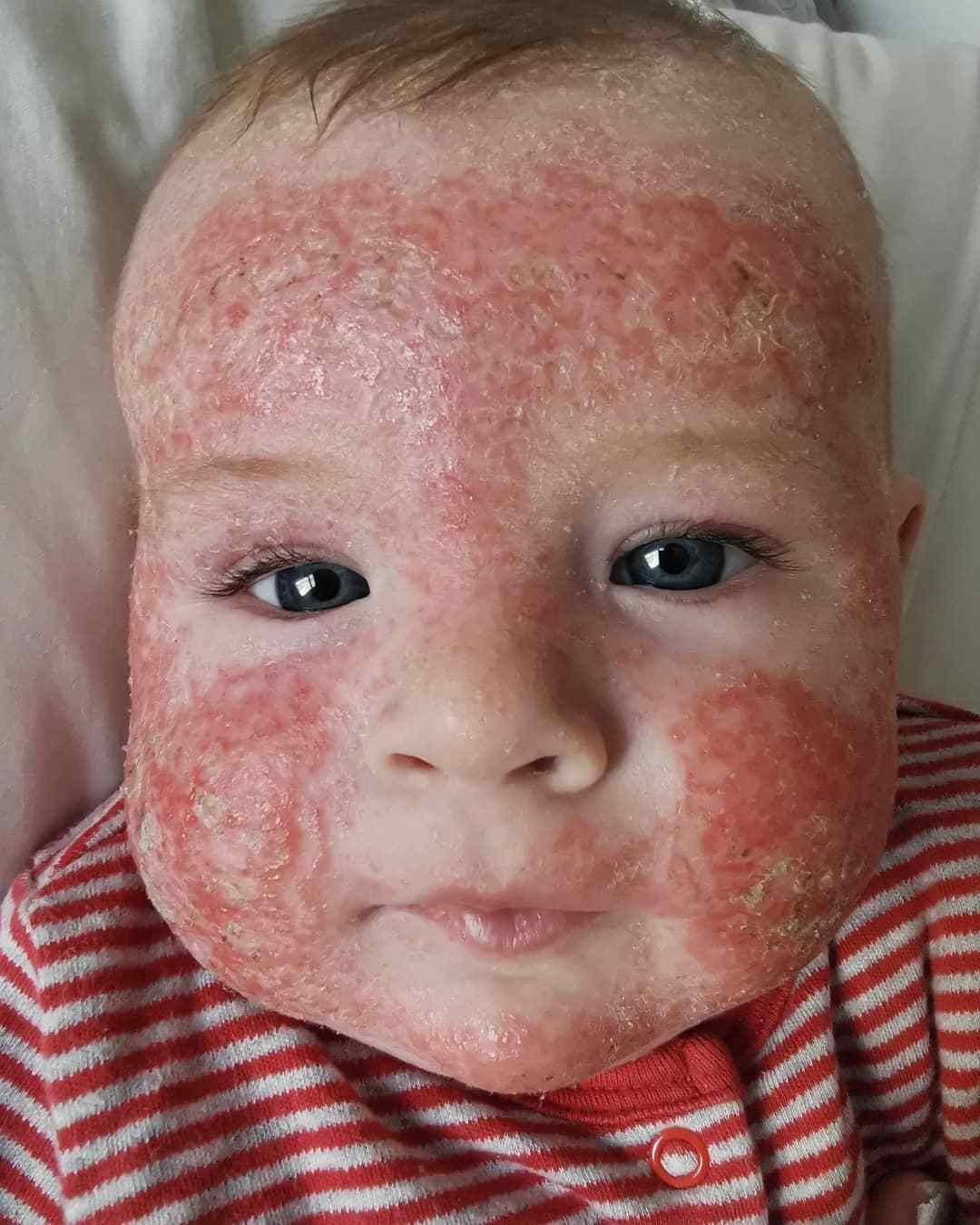 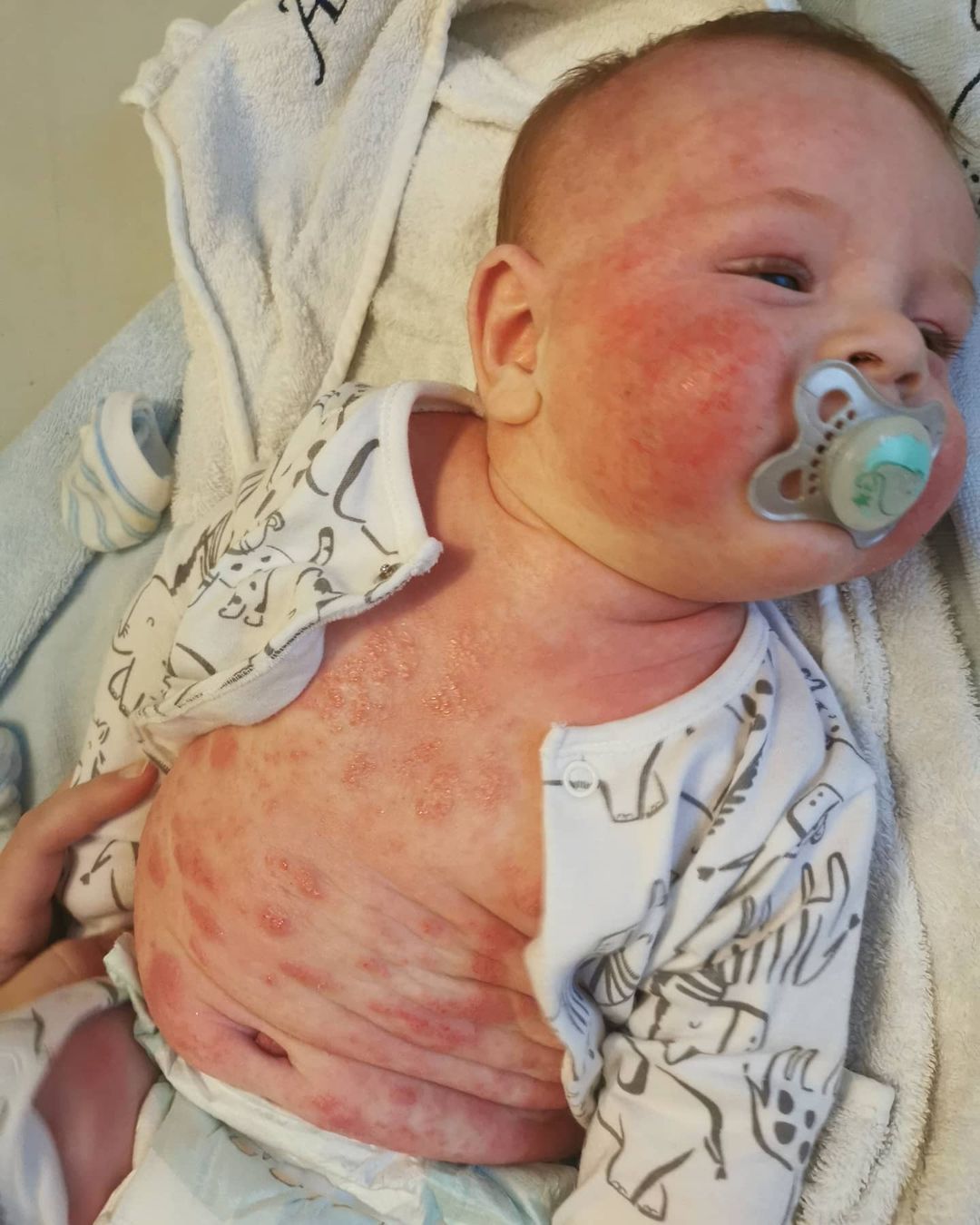 But Charlotte’s first child, three-year-old Thea, had suffered from both of these conditions, and she thought there was something more to Arhur’s suffering.

The mum believed that the milk was the problem but claims doctors continuously insisted Arthur did not have a cow's milk protein allergy (CMPA).

She and husband Lewis, 28, tried steroid creams, bath creams and milk formulas prescribed by doctors to help their “constantly upset” and sleep deprived baby – but to no avail.

Eventually, dermatologists at a children hospital urgently requested to see Arthur and were reportedly “shocked and disgusted” at his treatment to that point.

They prescribed a regime that worked miracles within 24 hours, according to Charlotte, who said he was laughing and rolling around within a week.

Now, Arthur only has flare ups of his eczema. 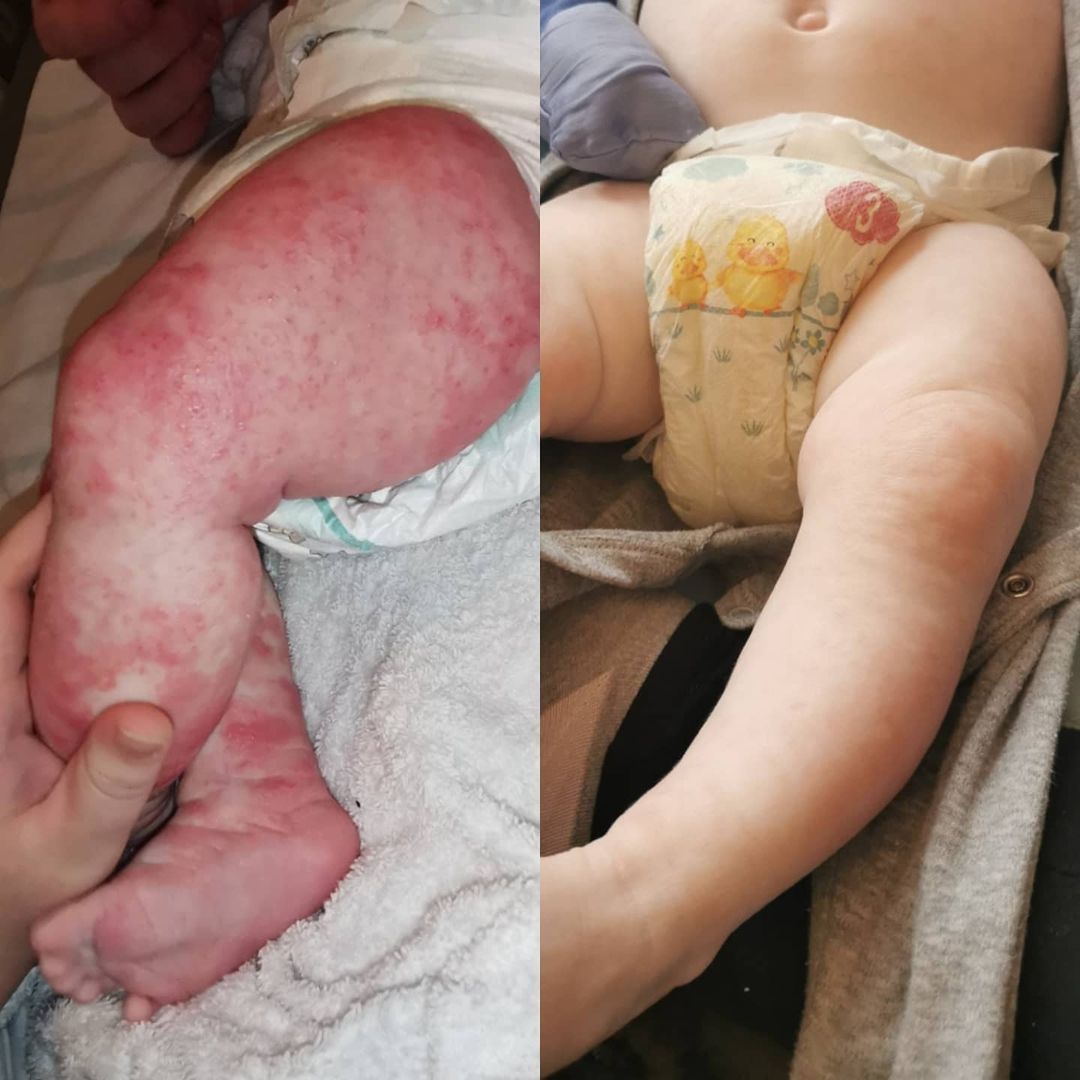 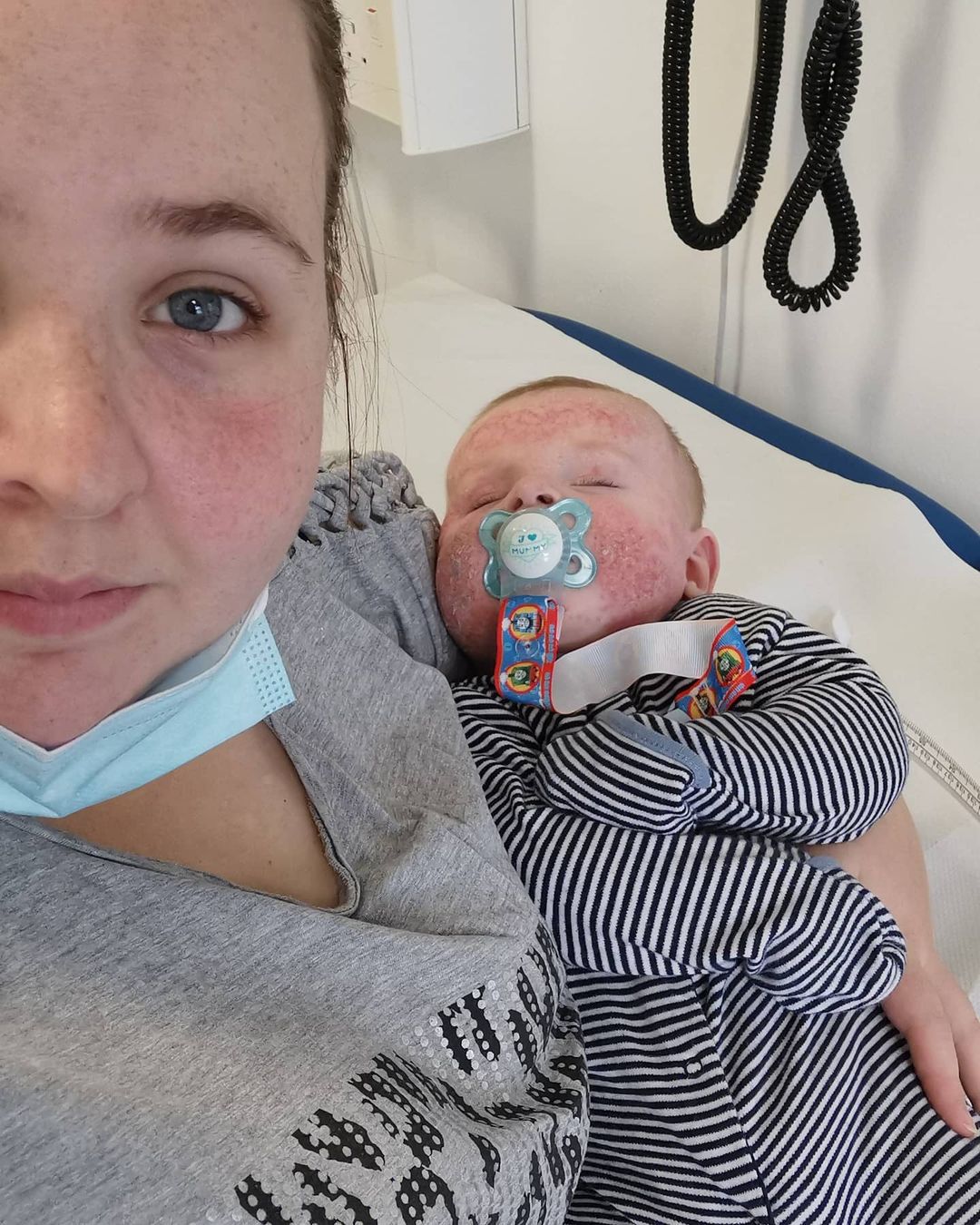 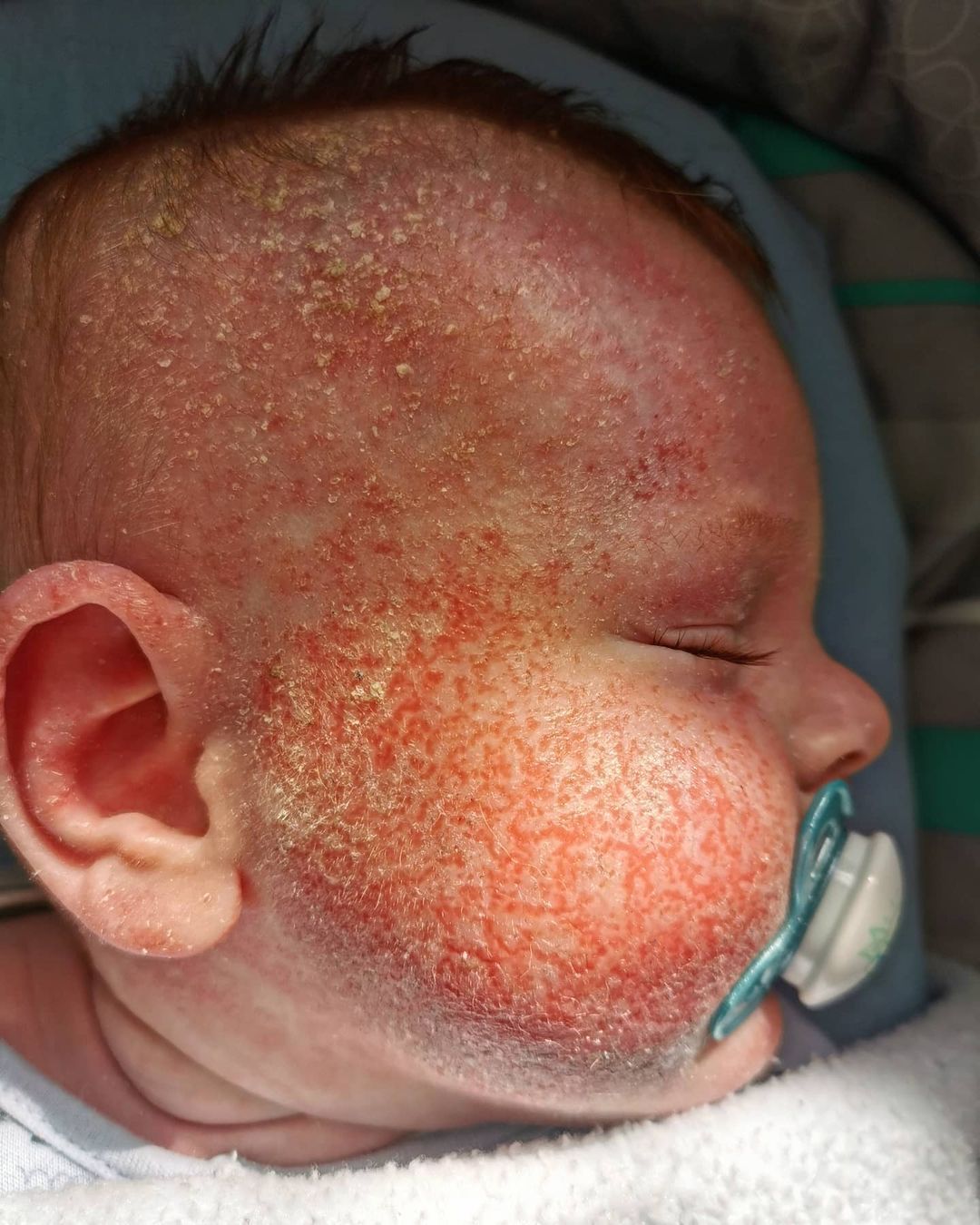 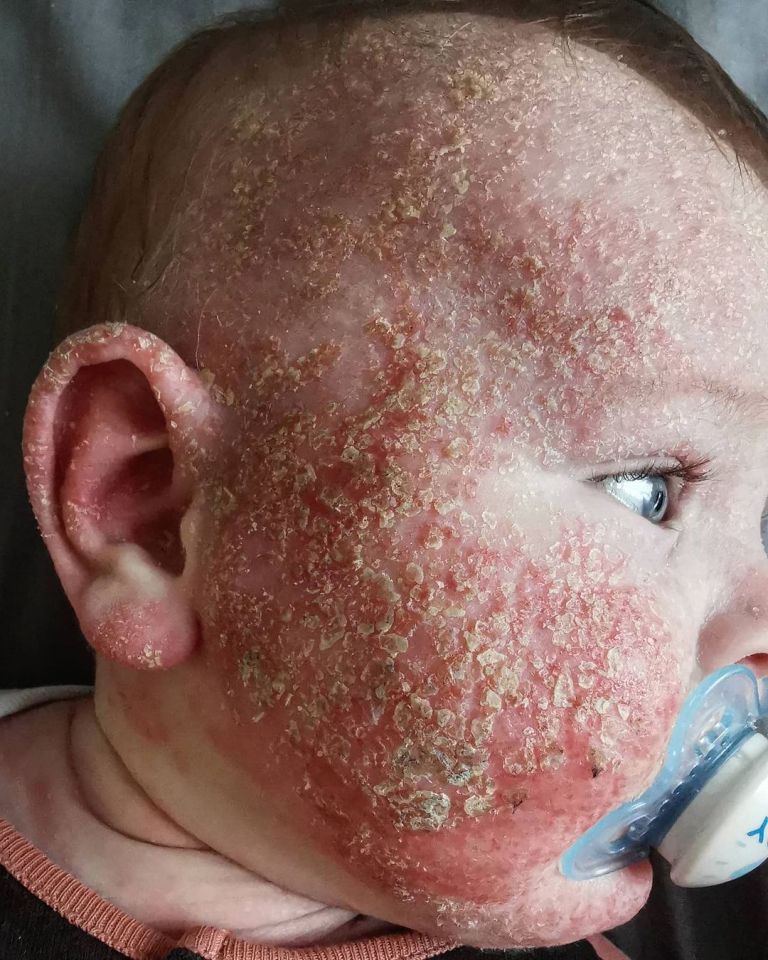 Charlotte, from Romford, Essex, said: “The eczema and reactions grew worse and worse, and in the end his skin was reacting to everything that went into or onto his body.

“His skin and bowels would bear the brunt of his reactions – he would have uncontrollable bowel movements that were like acid water, which left him blistered and raw.

“It seemed as though whatever had just gone into him was trying to get out via his skin.

“He couldn’t do anything – he never laughed, couldn’t roll, sit up, play or grab things.”

Charlotte felt “overwhelmed” trying to help her son when everything seemed to either have no affect or make him worse.

She said: “The toughest part was watching Arthur scream, cry, scratch, throw himself around and bleed.

“He would be absolutely uncontrollable and inconsolable. 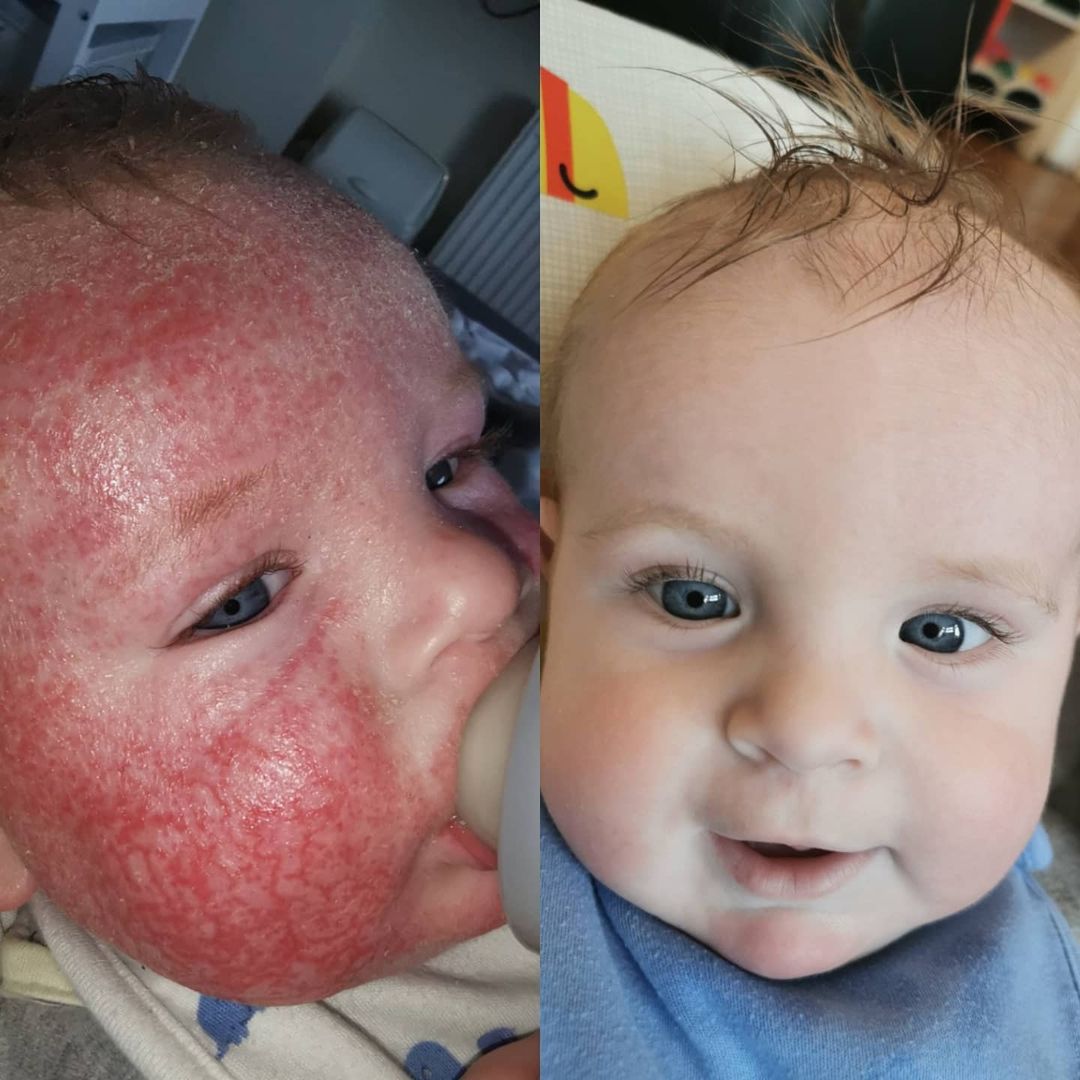 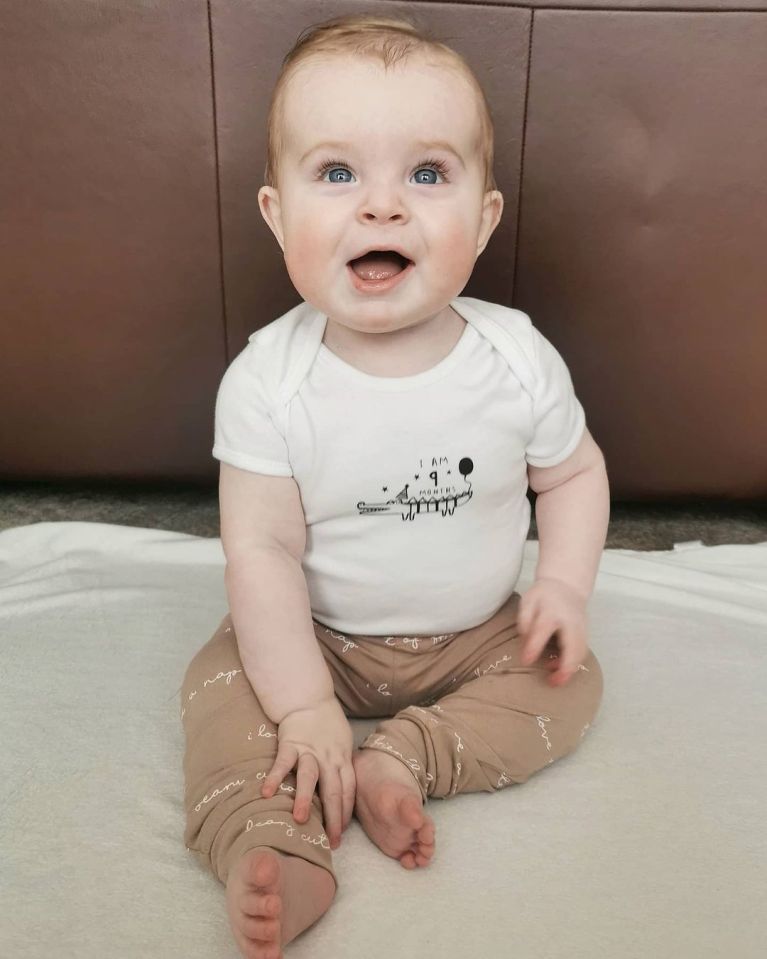 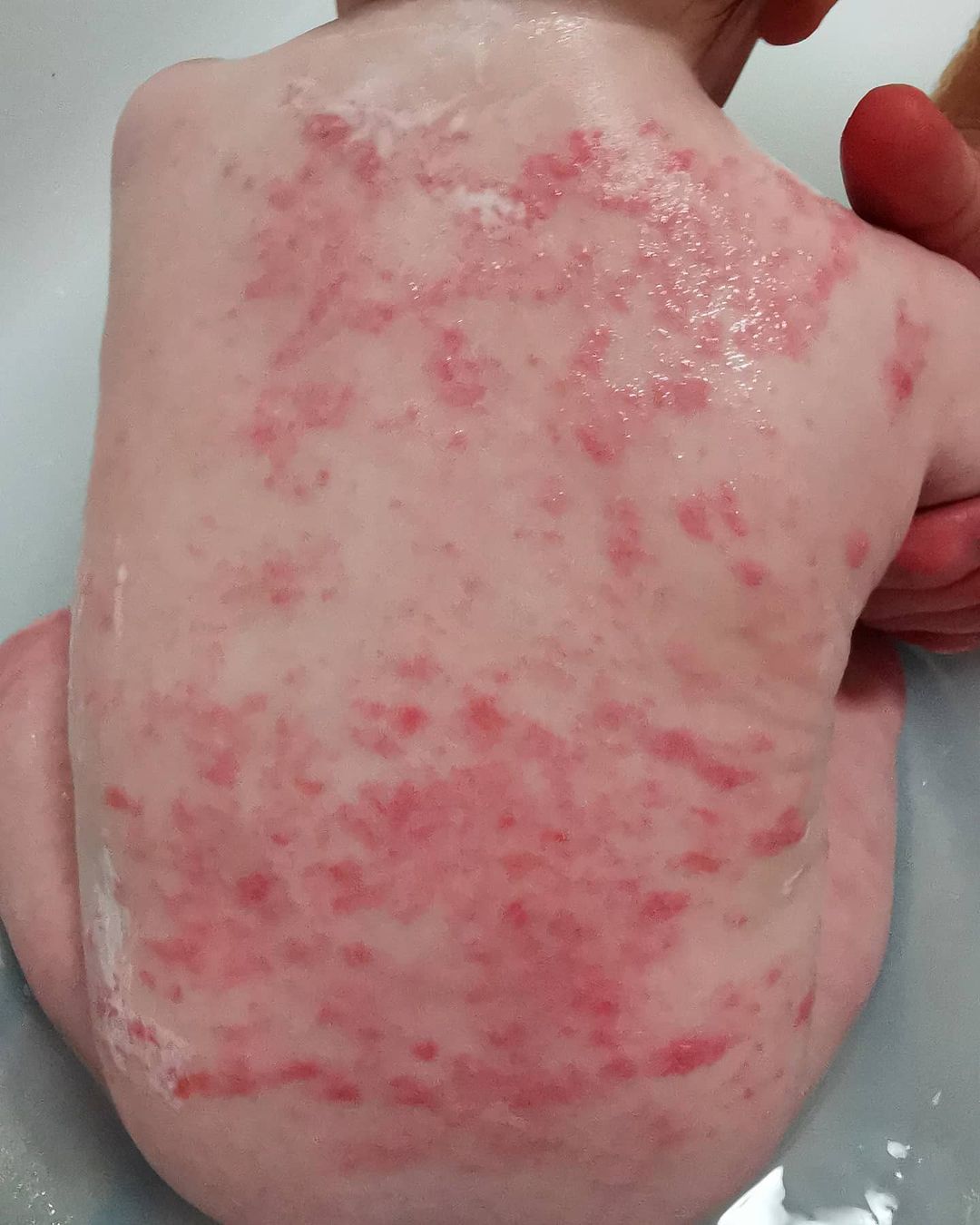 “Knowing that there wasn’t anything that I could do to help my child was absolutely heartbreaking.”

Charlotte noticed problems with baby Arthur’s skin the day after he was born in April 2020.

His face was patchy and swollen, which doctors reportedly dismissed as baby acne and swelling due to being born by caesarean.

But when Arthur was taken home and started having infant formula, he began suffering episodes of screaming after eating, vomiting up the formula and arching his back in pain.

After swapping Arthur's milk back to pre-made bottles she saw an improvement in his behaviour but the symptoms soon started up again.

She tried over the counter colic and reflux medicines – after Arthur’s GP suggested this was the cause – but nothing helped the poor baby.

Arthur was also suffering with severe cradle cap and constipation, and at four weeks old patches of eczema appeared on his cheeks and arms.

“From one to four months old, I was back and forth on the phone to the doctor,” Charlotte said.

“He was given antibiotics, mild steroid creams, bath creams and over the counter creams – nothing helped, it just made him worse and worse.

“Some creams would even make him look as though he had been burned.” 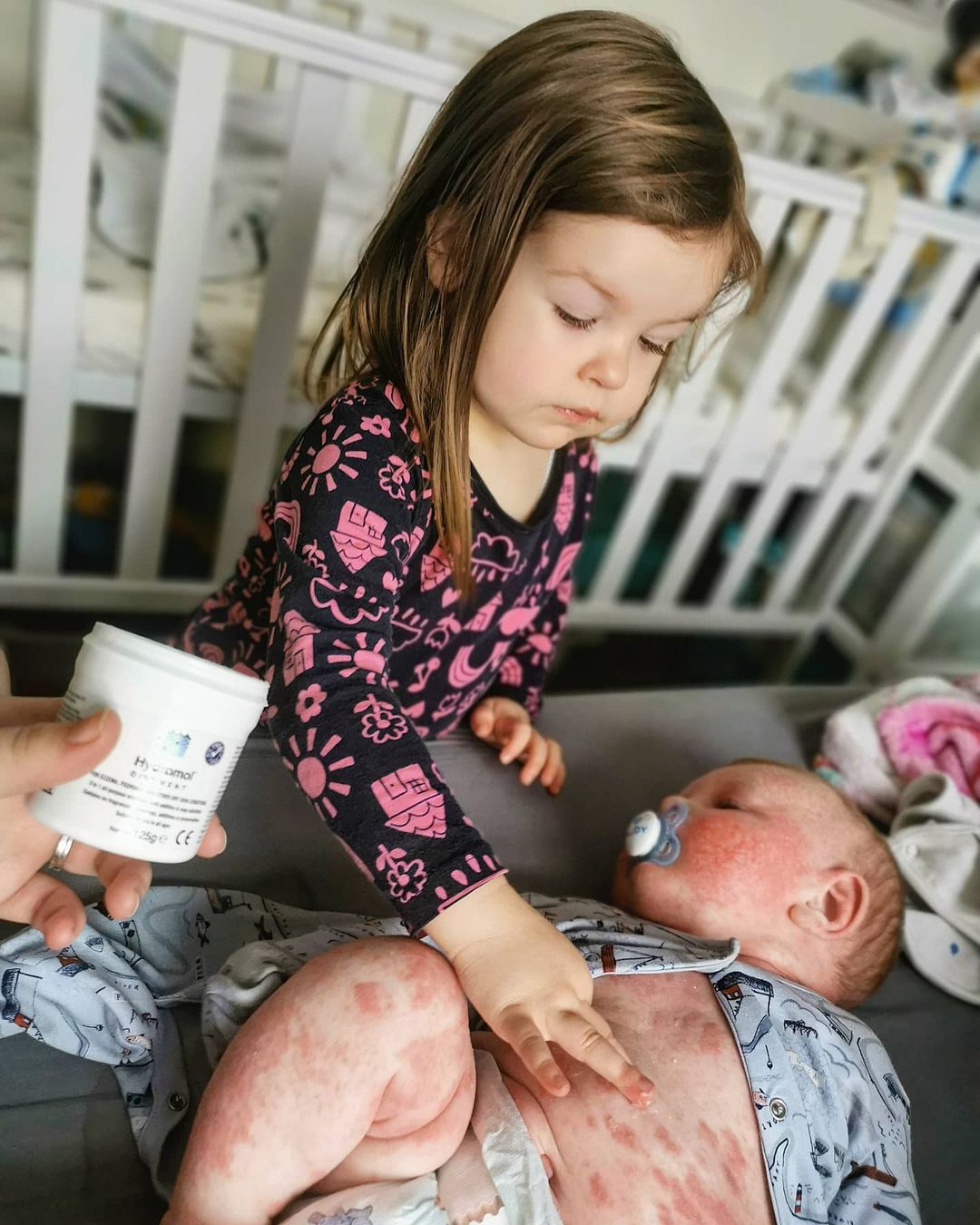 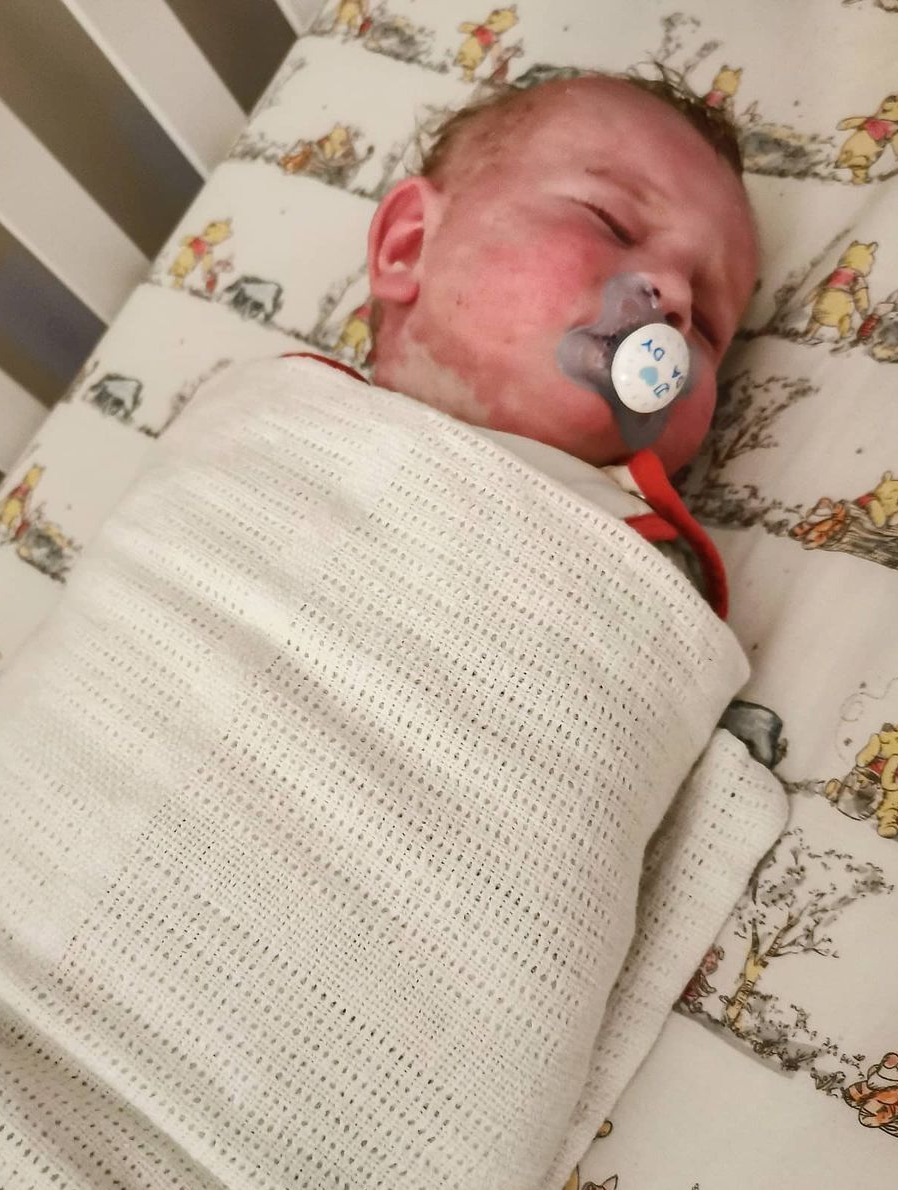 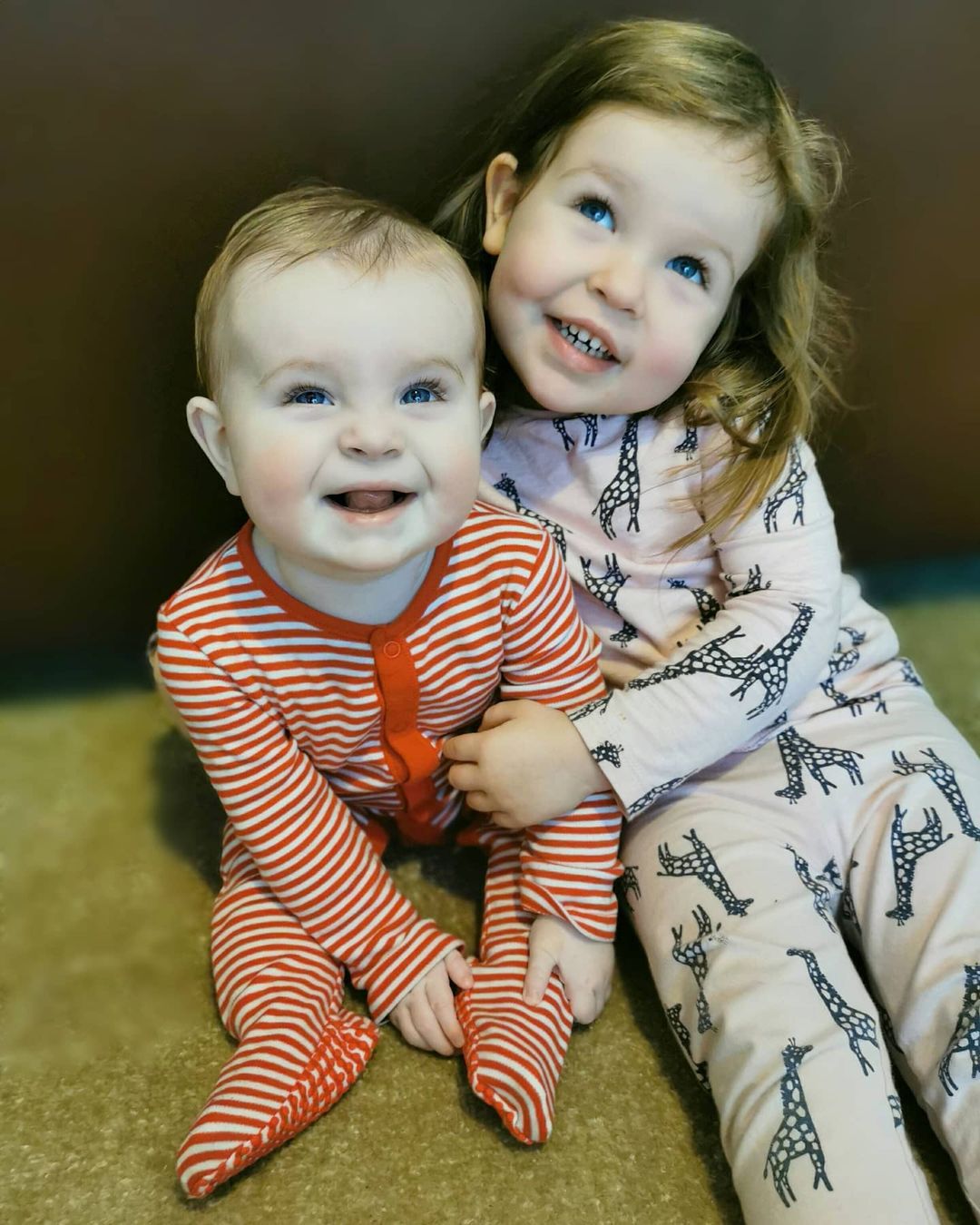 Cow’s milk allergy (CMA) is one of the most common food allergies to affect babies and young children in the United Kingdom it is still rare.

Symptoms of CMPA often start in the early weeks and months of life.

CMA is an abnormal response by the body’s immune system in which proteins in cow’s milk are recognised as a potential threat.

This can cause the immune system to be "sensitised". When this happens, there is the potential that when cow's milk is consumed the immune system remembers this protein and may react to it by producing allergic symptoms.

Allergic symptoms can affect one or more of the body’s systems, including the skin, digestive and, less commonly, breathing or blood circulation.

The symptoms can be "immediate", within a few minutes of consuming cow’s milk or up to two hours afterwards.

The other type of milk allergy happens when symptoms are "delayed", appearing up to 72 hours after cow's milk consumption.

This is caused by a different part of the immune system reacting in
a different way.

If cow’s milk continues to be consumed in the diet, the immune system will continue to produce such symptoms over days or even weeks.

Unable to get a face-to-face appointment due to Covid-19 restrictions, Charlotte took Arthur to A&E.

Within 10 minutes, he was diagnosed with CMPA and severe infected eczema.

CMPA is when the immune system sees proteins in cow’s milk as a threat.

It can cause the immune system to be “sensitised” – it recognises the protein and produces  allergic symptoms every time it sees the protein, according to Allergy UK.

This can affect the skin, digestive system, breathing and blood circulation.

Doctors prescribed Arthur a new formula, stronger steroid creams and bath creams, and within a week his skin started to clear up.

But when Charlotte tried to wean him off it, the skin issues came back with a vengeance.

She said: “The sleep deprivation was something else – I went seven months without sleeping more than three hours of broken sleep a night.

“Arthur would just scratch, cry and scream all night long. I had to wrap his arm up close to his body just so he would stop scratching for five minutes.

“His sister would get very upset watching him and it was tough trying to explain things to her.

“She would give me a cuddle when I would break down in tears, which was a lot.” 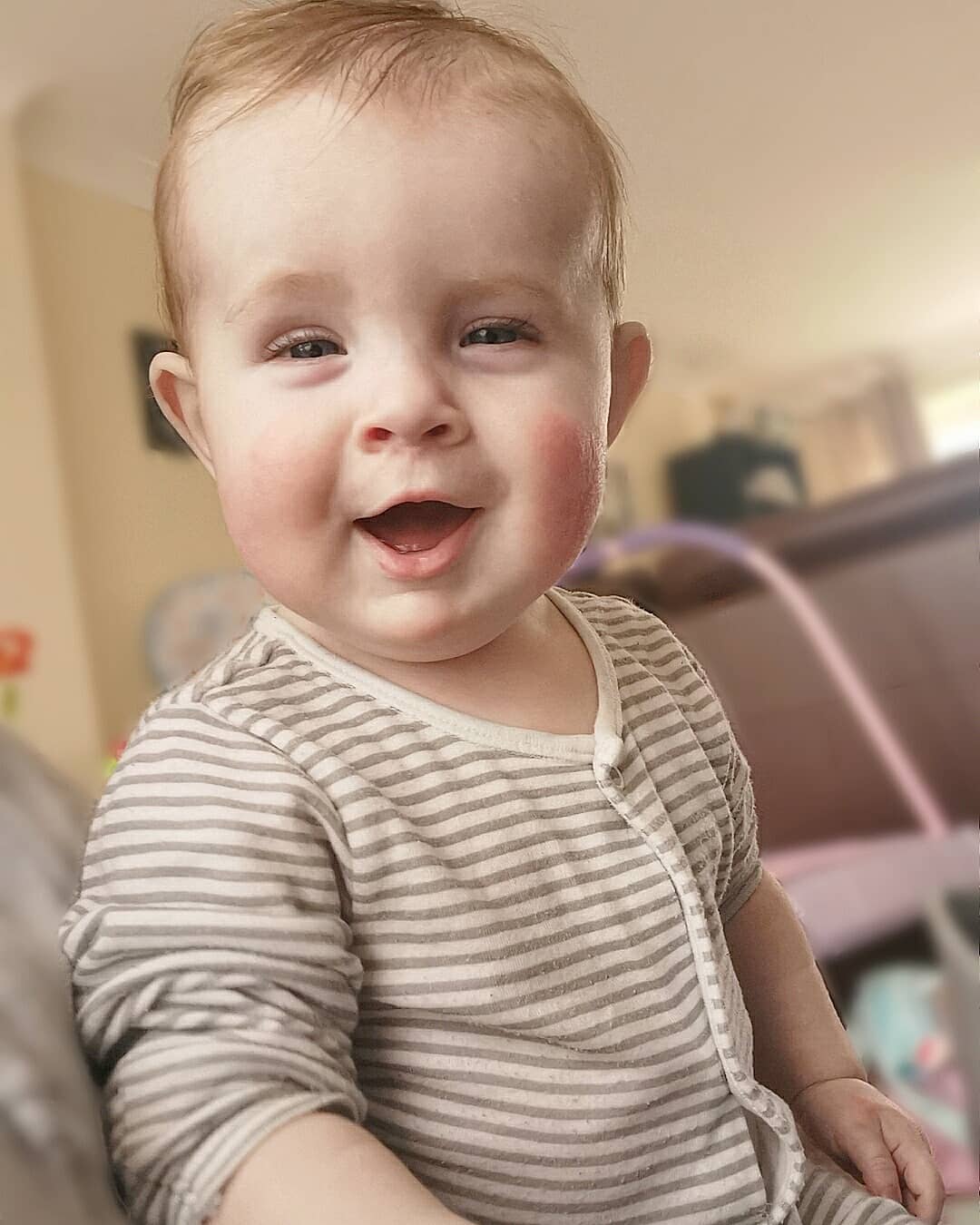 In October, Arthur was taken again to A&E after a bad reaction to a teething gel.

His dietician pushed for an appointment at Homerton University Hospital in London for allergy tests when he was seven months old.

Sadly, the condition of his skin was then too severe to carry out allergy testing and his body was 98 per cent covered in severe eczema.

“We went home feeling very deflated and wondering how long we would have to wait for someone to see him again,” Charlotte said.

“But I received a phone call the next day from the Homerton children’s dermatology department asking me to take him there that second – we couldn’t believe it.”

When Arthur was seen by the specialists, Charlotte said they were "shocked" and “disgusted” by how previous doctors had cared for his skin and couldn't understand how he had been left so long without proper treatment.

His new dermatologist gave him a strict skin routine which they said should help within one week.

It involved three different ointments, a gel for his scalp, and a special bath product.

Charlotte would apply steroid ointments over his whole face and body in the morning, followed by a cream 15 minutes later.

She had to reapply the cream every two hours, which dropped to every four hours in the second week. 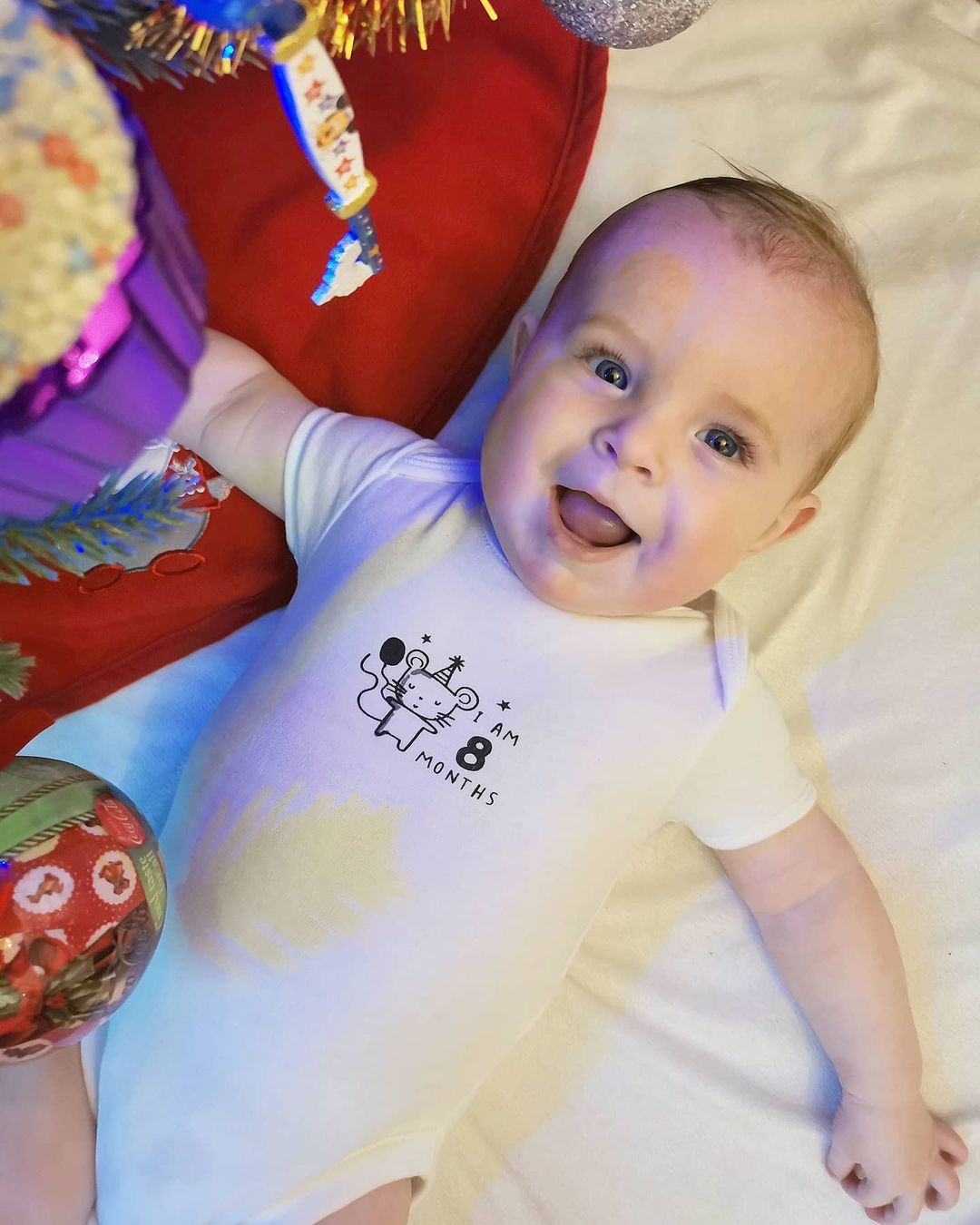 The mum said: “At the time, I was very sceptical and didn’t believe them, but he was clear in just 24 hours.

“By the end of the first week, he was laughing, rolling, sitting up, grabbing things and playing.

“I could change his nappy on my own without him scratching and he slept through the night for the first time ever.

“His big sister found it so amazing that she could finally play with her baby brother as she couldn’t touch him before.”

Now, sweet Arthur is flourishing and only suffers mild eczema flare-ups occasionally, caused by environmental factors such as dust and washing detergents.

He is still on the special formula but is weaning and “loving” all of his food, having had his allergies retested.

Charlotte is careful to read food labels to ensure no dairy gets into Arthur’s diet, which would cause another devastating flare-up.

She added: “A lot of doctors seem very standoffish when it comes to CMPA, sort of like they don’t believe it’s a real allergy.

“I have come across many people and children like our family that have gone through the same situation.

“But do not give up and don’t be scared to go over somebodies head to get to where your child needs to be.

“Arthur is now a happy, healthy 10-month-old who is thriving – he has come so far.”