More than 100 million Americans have received their first COVID-19 vaccine booster dose, according to data from the Centers for Disease Control and Prevention.

MORE: Pfizer may have COVID-19 booster that addresses omicron, other variants by fall

When broken down by state, Vermont has the highest percentage of fully vaccinated residents with a booster at 60.2% followed by Minnesota, Wisconsin, Maine and Michigan, respectively. 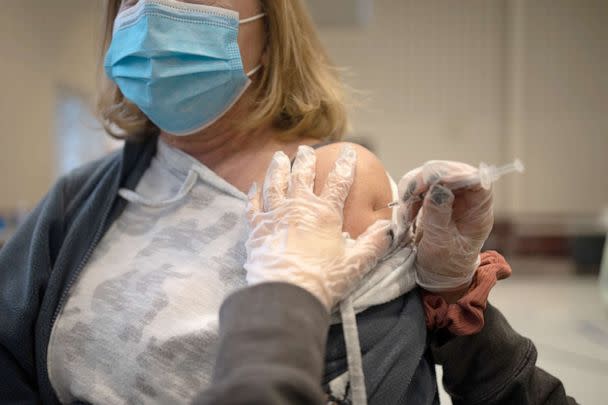 The new figures come as COVID-19 cases continue to rise in the U.S. Currently, the seven-day rolling average sits at 44,000 new infections — the highest number seen since March 3, according to the CDC.

Over the past few months, doctors have been stressing the importance of getting an additional shot, particularly as immunity from a primary vaccine series wanes and more infectious variants spread.

Additionally, Pfizer and Moderna have released data in the past showing efficacy of COVID-19 vaccines against infection declines after a few months, but a third dose boosts antibody levels.

About half of Americans eligible for a booster shot — approximately 91 million people — have yet to receive it, the CDC data shows.

"While vaccination milestones deserve celebration, our booster campaign has fallen far short of a success storm," said Dr. John Brownstein, an epidemiologist at Boston Children's Hospital and an ABC News contributor. "Despite targeted public health messaging and wide availability of vaccines, getting to over half the eligible population boosted took many months to achieve."

He added that experts predict new variants will emerge and without enough people boosted, it "enhances the risk of a significant surge that overwhelms our health systems."

The CDC does not have data on how many Americans have received a second booster dose.

However, during a meeting last month of the CDC's advisory committee, it was revealed that only about 4.3 million people over the age of 50 have received a second booster since they were authorized a few weeks ago.