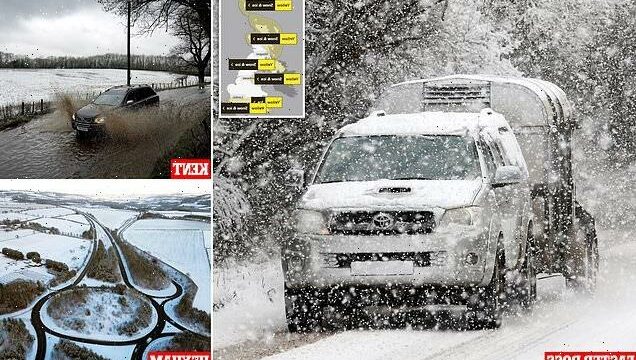 More ice and snow is on its way to the UK as the five-day cold snap that has brought sub-zero temperatures continues to batter the country.

The Met Office has issued yellow for warnings for snow and ice across southern England, parts of the northwest and north Wales, Northern Ireland and large parts of northern Scotland.

Health chiefs have issued a level three cold alert due to the ‘severe winter weather’ and have urged the public to check on vulnerable friends and family in the coming days.

Officials are warning the plunging temperatures could pose a risk to people’s health if they are not prepared, while people who are travelling are being told to be wary of conditions. 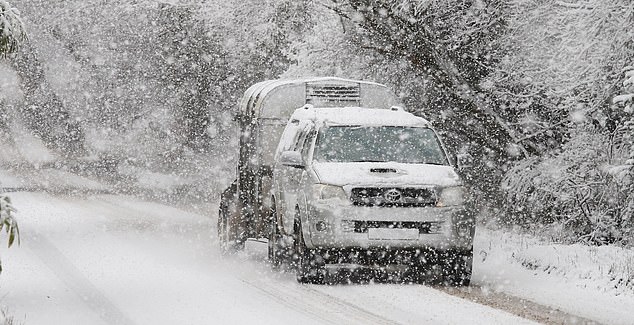 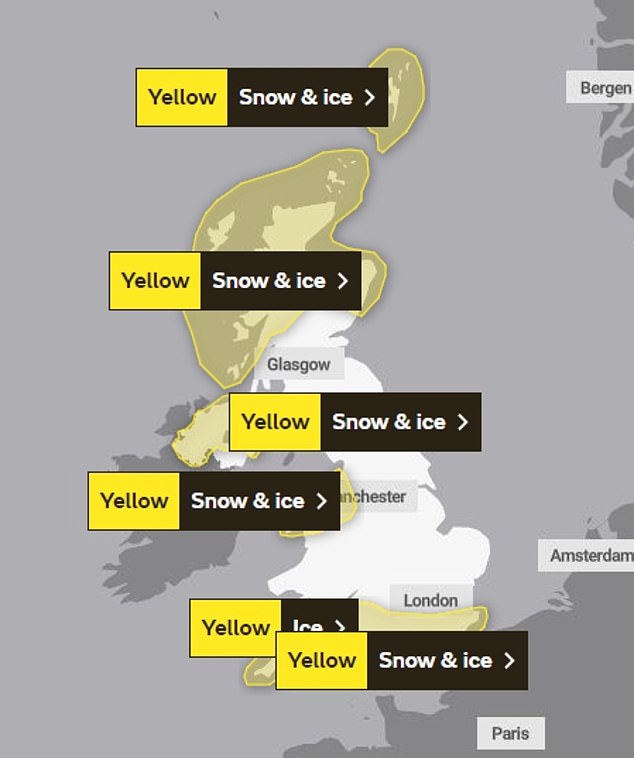 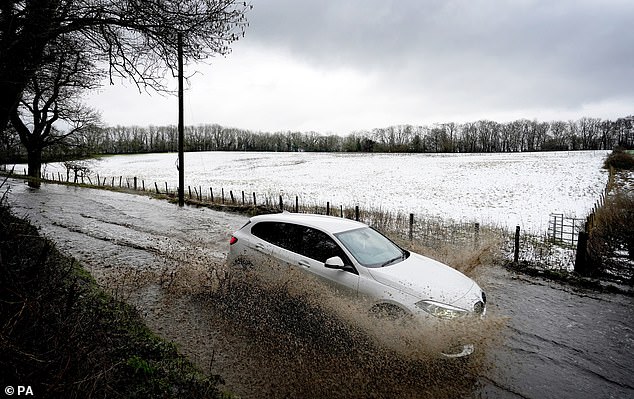 Snow has already fallen, with many parts of the country waking up to a the white stuff and ice on Monday morning.

Locked in winter’s icy grip: Britain is battered by sub-zero plunge and snow as heavy rain leaves cars, pubs and homes submerged by water – with -11C chill set to last for five days 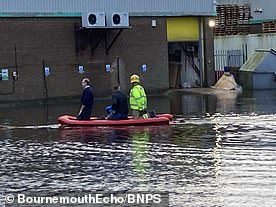 However, the Arctic blast is set to continue over the course of the week, bringing treacherous conditions with it – some areas will see lows of -5C overnight.

Later in the week the mercury could drop as low as -11C, sparking the UK Health and Security Agency (UKHSA) to issue a warning over the cold.

The Government agency urged people to wear several thin layers and consume plenty of hot drinks if they’re feeling the chill in the coming days, and to be mindful of vulnerable family members, friends or neighbours who might need checking upon.

It added that anyone struggling to afford heating bills should try to keep their living room warm and heat their bedroom before going to sleep, the Telegraph reports.

Dr Agostinho Sousa, head of extreme events and health protection at UKHSA, said: ‘Cold weather can have a serious impact on health, particularly older people and those with pre-existing health conditions, as it increases the risks of heart attacks, strokes and chest infections.

‘During this period, it is important to check in on family, friends and relatives who may be more vulnerable to the cold weather.

‘If you have a pre-existing medical condition or are over the age of 65, it is important to try and heat your home to at least 18°C if you can.’ 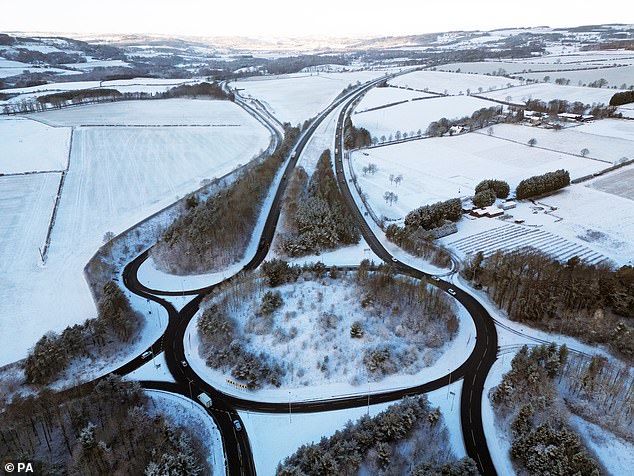 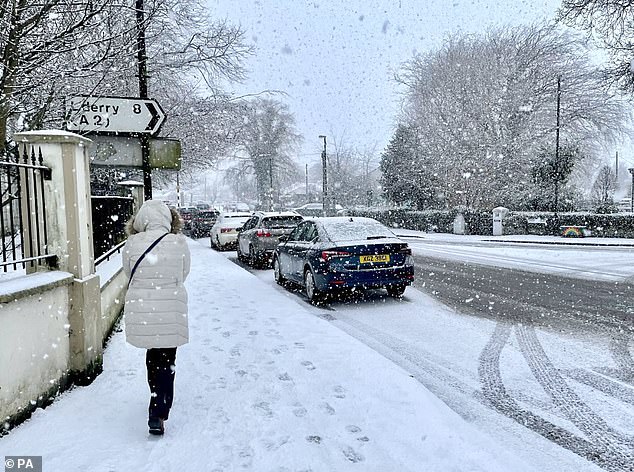 A woman walks through falling snow in Eglinton, County Londonderry, in Northern Ireland on Monday 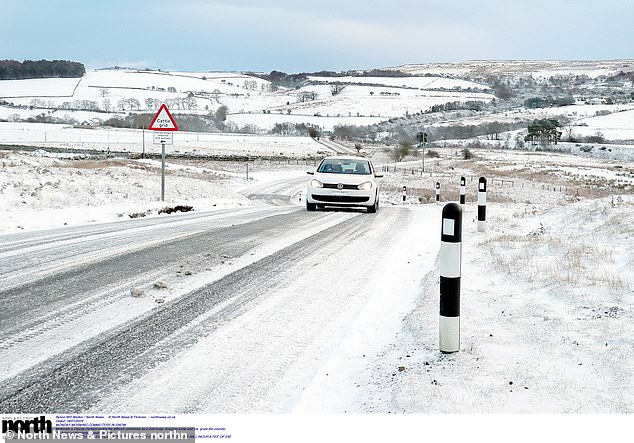 A motorist drives up a hill in snowy conditions in Waskerley, near Consett, County Durham, on Monday

The Met Office warned of travel chaos on the roads, with police in Sussex and Wiltshire both reporting serious crashes due to the icy conditions on Monday night.

Sussex Police said the A27 was closed in both directions between Fontwell East roundabaout and Arundel after a collision shortly before midnight.

Meanwhile, Wiltshire Police said one car flipped onto its side after a crash involving two vehicles at Berwick St Leonard at around 5.50pm, while a couple of hours later there was a three-vehicle incident near Chippenham.

The service has warned there could be similar scenes on Tuesday morning after issuing six separate yellow warnings across the UK.

An ice warning is in effect for southern England until 10am on Tuesday, with Cornwall also under a snow warning for the same time period as rain could turn to the white stuff as it falls.

There is a warning for snow and ice across north Wales, as well as Merseyside, Cheshire, Greater Manchester and Lancashire, which is in effect until midday. The same warning is in place across Northern Ireland at the same times.

Large parts of Scotland, including the Highlands, Aberdeenshire and the Shetland Islands, are covered by a yellow snow and ice warning until 9am on Wednesday, with the Met Office warning snow could turn heavy at times.

All these areas will see tricky conditions on the roads and on public transport, with people being urged to take care when travelling.

Jason Kelly, the chief meteorologist at the Met Office, said: ‘Cold, icy and sometimes snowy conditions are in the forecast this week, with the UK seeing more of a north-westerly regime, with temperatures well below average for the time of year.

‘Wintry showers are likely at points through the week in the north of England. Warnings have been issued, and ice is likely to be a hazard for much of the week with some tricky travel conditions possible.

‘Maximum temperatures will largely only reach the low single figures, with temperatures below freezing through most nights this week.’ 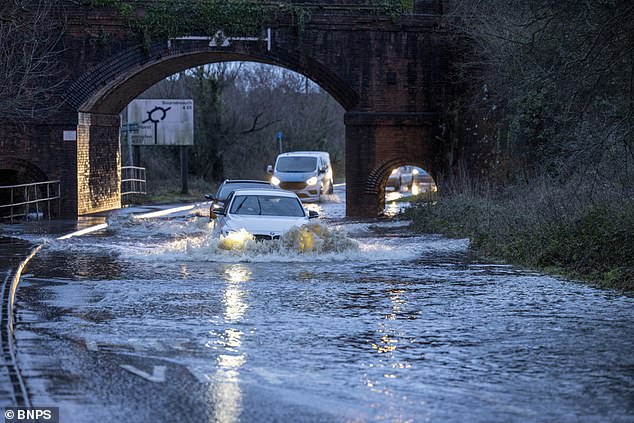 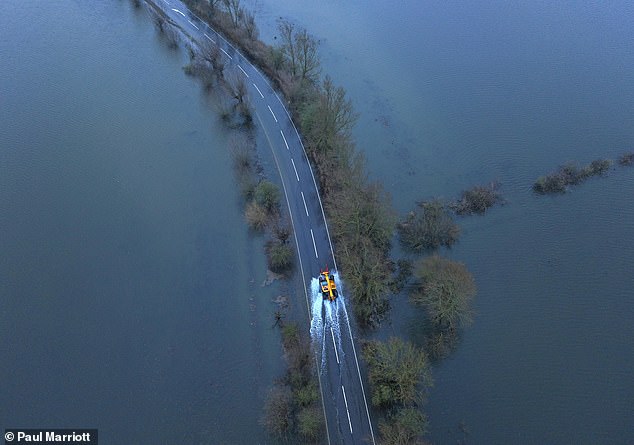 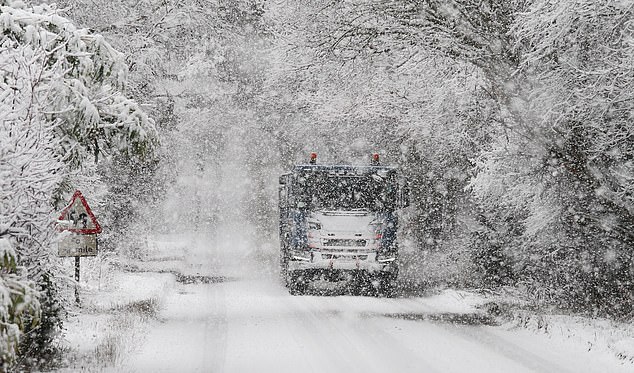 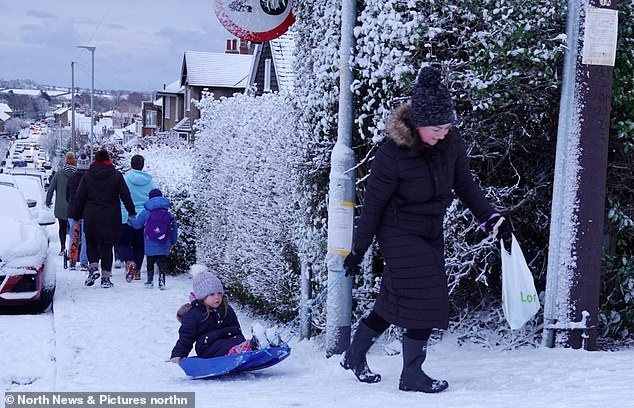 A woman pulls a little girl on a sled as they walk along the snow-covered pavement in Alnwick, Northumberland, on Monday 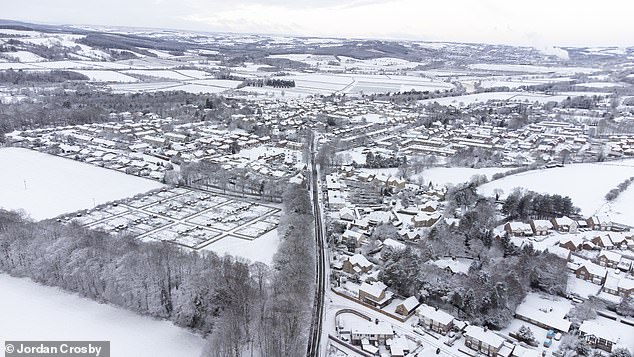 On Monday morning there were multiple crashes reported in Kent and complaints of ‘crawling’ traffic on sections of motorways such as the M25 and M6.

There were also reports of a ‘landslide’ on the South Western Railway network, before a video emerged of what train operators said was actually ‘liquified mud’ bursting on to the tracks at Addlestone in Surrey, causing severe delays.

Thameslink, Gatwick Express and Southern Rail also reported trains running at reduced speeds due to flooding caused by heavy rain, with passengers urged to ‘allow extra time’ for their journeys.

Snow and ice is also expected to affect northern Scotland until 10am on Wednesday, according to the Met Office.

Elsewhere, heavy rainfall has caused flooding in York, where pictures taken on Sunday night showed homes, pubs and businesses along the River Ouse pumping out water after becoming partially submerged.

And water rescue crews were ferrying employees at the Woolsbridge Industrial Estate in Wimborne, Bournemouth, to and from their buildings by boat following flooding.

There were also downpours in parts of Dorset, with roads experiencing deep flood water.

While the heavens opened above London, too, the capital missed out on any snow action.

The city saw highs of 5C on Monday before dropping to 0C by 10pm and to -2C for most of Tuesday morning.