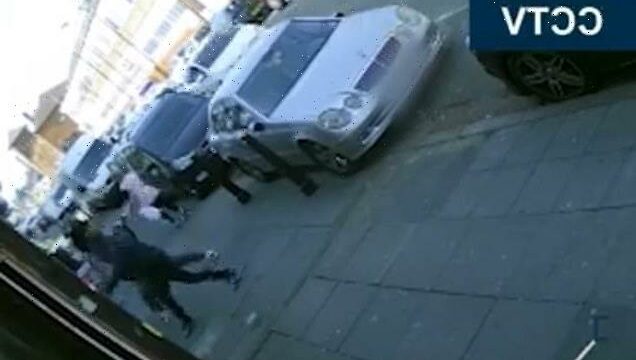 Moment two armed robbers smash their way into jewellers using a pick axe and hammer and swipe £40,000 of goods – before being caught by police minutes later

This is the dramatic moment a gang of armed robbers stole thousands of pounds of jewellery during a broad daylight raid – before they were caught by police minutes later.

Thomas Barney-Jones and Callum Kewmoss, both 32, were caught on CCTV smashing their way into a jewellery store in Leicester at around 2.20pm on March 26 earlier this year.

The pair, armed with a hammer and a pickaxe, then made their escape in a stolen car being driven by Eugene Alexander, 48, with around £40,000 worth of Indian bangles and a necklace.

Police officers rushed to the scene at Kohinoor Jewellers in St Saviours Road, by which time the shop owner had already identified the getaway car’s registration. 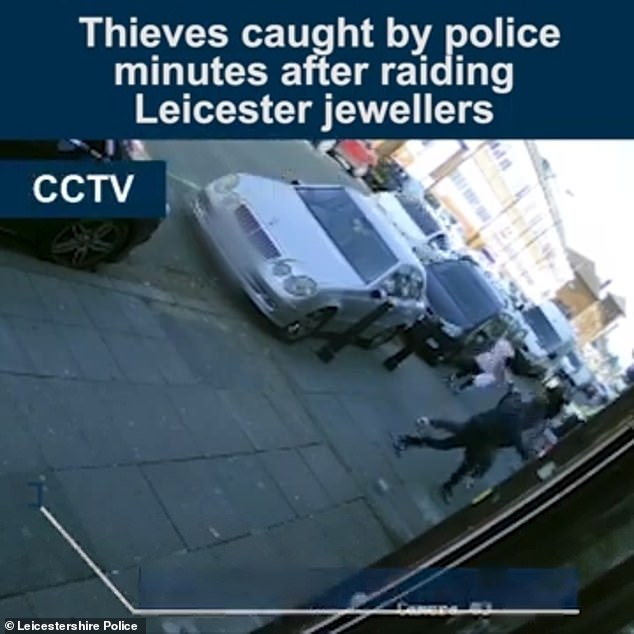 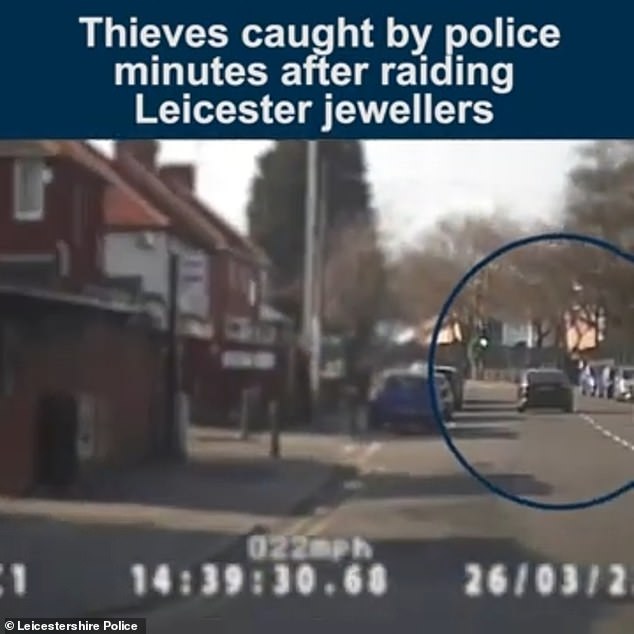 The pair, armed with a hammer and a pickaxe, then made their escape in a stolen car before it was stopped 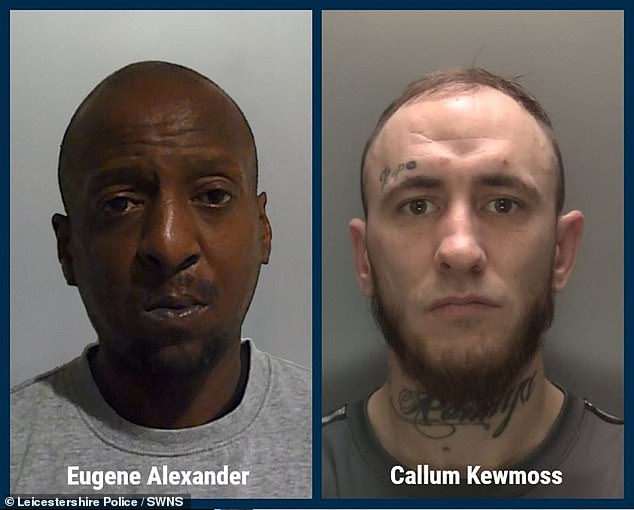 Callum Kewmoss, 32, was one of two men to break into the shop before getting into a stolen car driven by Eugene Alexander 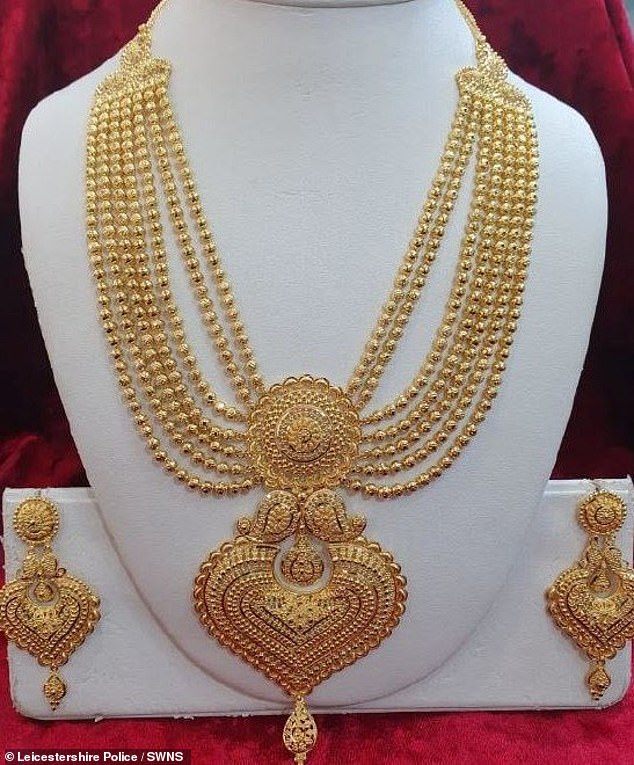 The armed gang made off from the store with around £40,000 worth of Indian bangles and a necklace

An unmarked police car soon spotted the black Ford Mondeo six miles away and followed them until it parked up, where the three men then tried to escape on foot.

Body-cam footage shows the moment officers gave chase on foot shouting: ‘Get here now. Stop! You are going to get sprayed.’

They were able to detain Barney-Jones and Alexander, with the help of a police helicopter, just 36 minutes after the robbery.

Kewmoss was later arrested after his DNA matched a blue jacket found dropped next to the getaway vehicle, which had been stolen in the West Midlands.

Inside the car was also a rucksack containing the stolen jewellery, the weapons used to carry out the raid as well as gloves and balaclavas. 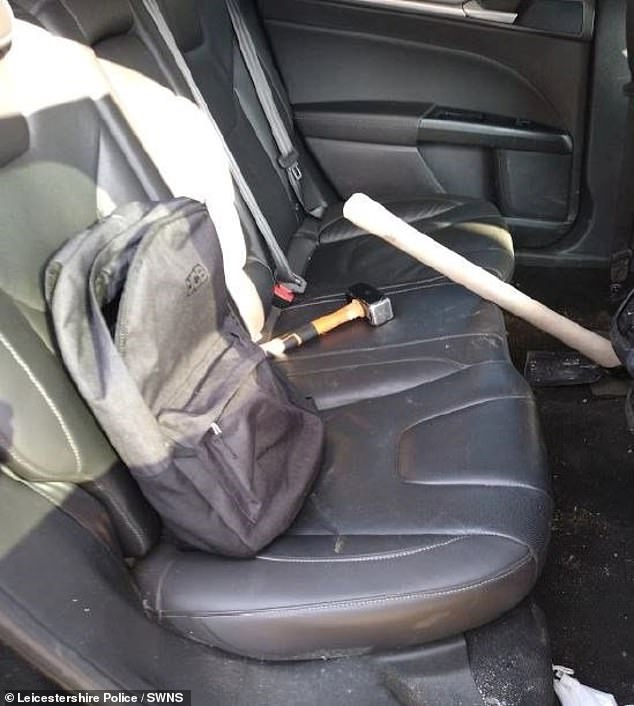 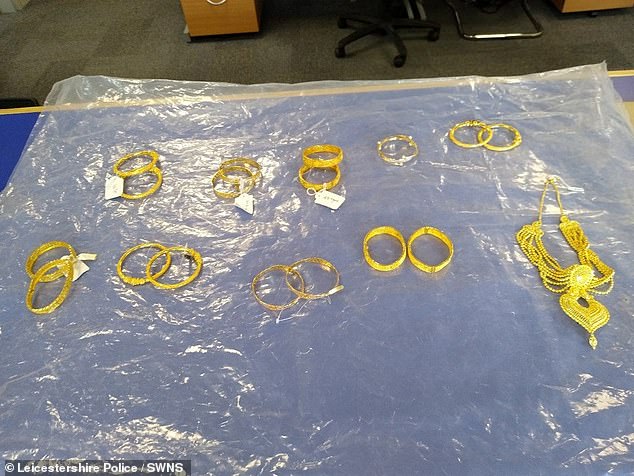 Barney-Jones, of Leicester, previously pleaded guilty to burglary and was jailed for 18 months at Leicester Crown Court on Thursday.

Alexander, of Ratby, Leicestershire, was found guilty of burglary following a trial in October was sentenced to three and half years’ imprisonment.

Kewmoss, of South Wigston, Leicestershire, was also found guilty of burglary during the same trial and was sentenced to three and half years behind bars.

Detective Constable Vanessa Thomas, of Leicestershire Police, said: ‘The three men carried out this crime on a busy street in broad day light – fleeing the scene in a stolen vehicle.

‘It was thanks to the efforts of the victim we were able to quickly put out observations for the car and it was spotted by an officer nearby.

‘The men ran and, in their haste, left the jewellery and the equipment behind. Again, officers were on their tails and two of them were arrested within a matter of minutes.

‘Barney-Jones admitted his involvement but despite the evidence both Alexander and Kewmoss denied any wrongdoing.

‘I am pleased they have now been found guilty and all three have been brought to justice for the crime.’