Birmingham: On a radio program usually reserved for interviews with prime ministers, captains of industry and knights and dames, Jason Donovan was treated as a right-royal guest.

Britain was about to mourn a television show made 10,000 miles away and barely watched by the masses for years. But sandwiched between earnest conversations about the Conservative Party’s leadership contest, a European energy crisis and the latest transgender debate, BBC Radio 4’s Today program found time to farewell what was once among the nation’s most-watched nightly TV shows. 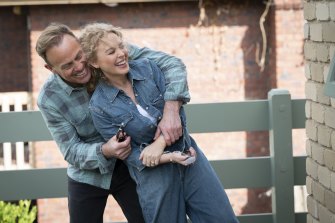 “I’m extremely proud of those 37 years that Neighbours shone a light on our culture, that wasn’t just a blown-up fictitious version like the Crocodile Dundees,” Donovan told listeners.

“It showed the everyday life of how Aussies live. It kept a lot of people in my industry employed and developed talent.

“You never forget your roots. To see today the amount of talent that has come back to Neighbours shows just how much that show meant to them.”

The screening of the Neighbours farewell episode inspired nostalgic viewing parties across Britain and Ireland on Saturday morning AEST where, at its peak, it was watched by 20 million viewers as Scott and Charlene (aka Kylie and Jason) walked down the aisle three decades ago. Many tears were shed. 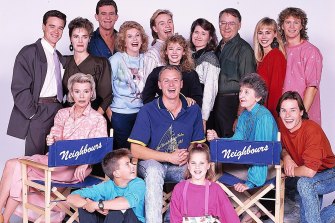 As they were: the Neighbours cast in 1989.Credit:File

It was regularly watched by between 8 and 10 million viewers on BBC1, with aggregated figures of its lunchtime and 6pm screenings leading Neighbours to often beat Coronation Street and EastEnders.

In the late 80s it was a phenomenon. Kylie Minogue and Donovan were household names in both countries and would each go on to launch music careers in the UK. Their duet Especially For You was number one in the UK, Ireland, Greece and Belgium.

Even Suddenly, sung by Rose Tattoo’s Angry Anderson and used for the famous wedding scene, peaked at number three on the UK Singles Chart. Years later beloved sitcom Gavin & Stacey would use the same tune to pay homage to Scott and Charlene’s special day at Nessa’s wedding to Dave Coaches.

In The Times newspaper this week another Australian icon, actor and comedian Barry Humphries, penned a love letter to the show, declaring its demise the “end of an era”.

He wrote that when the show was at its peak he’d attempted to convince English friends it was “unscripted” and “cobbled together from real footage caught from hidden cameras in typical Australian homes”.

“Very few believed me, to their credit, but nevertheless I extolled its authenticity. To me, Neighbours feels like Australia, or it did when Jason and Kylie were its stars. It’s so clean, so self-assured, so comfortable. It depicts Camelot down under, a suburban paradise beneath the sun. There are no shadows, even when the plot takes on a darker hue,” Humphries wrote.

More than 60,000 people had signed a petition earlier this year in a bid to stop it being axed, but it was not to be. Britain’s Channel 5 was pulling the pin and Neighbours would be no more.
Such a moment it was that The Guardian lived blogged the final episode. 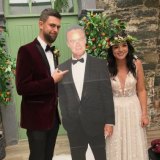 Neighbours-mad Gareth Rainey and his wife Karen at their wedding in Belfast where a life-size Paul Robinson welcomed guests. Credit:Gareth Rainey/Twitter

In Belfast, Gareth Rainey and his wife Karen struggled to come to terms with saying goodbye to their favourite TV show this week.

“When we first met she [Karen] told me that I had to watch Neighbours with her so that’s how she roped me in,” Gareth said. “Now I’m hooked on it and really don’t want the series to end. Karen has been a super fan since she started watching it as a child with her mum.”

The pair were on holiday in Cornwall in December 2019 when Gareth proposed wearing a Paul Robinson mask.

“I thought there would be a better chance of her saying yes to his face! No matter what that man does on Neighbours, she worships the ground he walks on. At our wedding in October 2021 at Orange Tree House in Greyabbey, we also had a life-size Paul Robinson welcoming guests.”

Minogue, who starred in the show between 1986 and 1988, said in Britain this week she was initially concerned about returning to the role for the finale.

“I guess because the show kept going and moved on. Also, Charlene was such a presence in people’s memory, I wasn’t sure how it would work,” she told Digital Spy.

She said a message from Donovan sealed the deal. “Jason and I are connected anyway, but he wrote me a beautiful email, so eloquent and heartfelt about this being a moment for us to acknowledge and say thanks to the fans,” she said.

Following its prime-time screening on Friday night in Britain (Saturday AEST), a review in broadsheet newspaper The Telegraph gave the final episode five stars for a “seriously tear-jerking end”. 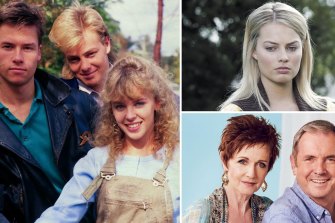 “Like most people of a certain age, I watched Neighbours avidly at school (the ultimate achievement was to watch both the lunchtime and teatime editions while pulling a sickie) then gave it up on entering the world of work,” wrote arts editor Anita Singh. “But this finale was all about nostalgia, made for people who watched it in the early years.”

Praising Guy Pearce’s performance as Mike, she wrote: “I couldn’t think of a better ending, unless they’d somehow managed to bring Bouncer back from the dead.” 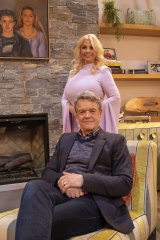 “The internet didn’t instantly transport us to far-flung places back then and there were only four channels in Britain,” he wrote. This portal into a lovely fresh world of gentle, sweet, sunny suburbia made us smile.”

Channel 5 has teased that further announcements will be made in the coming weeks about additional surprises to send off the iconic soap in style. The stars will potentially embark on a farewell tour of the UK, visiting London, Manchester, Birmingham, Brighton, Southampton, Glasgow, Edinburgh and Cardiff in March.

But for now, the show is being remembered by The Mirror’s TV critic Ian Hyland as one “which changed the face of British TV forever”.

“At least this good thing came to a good end,” he wrote.