Tegucigalpa, Honduras: The condition of the world's second-largest coral system, the Mesoamerican Reef stretching from Mexico to Central America, has taken a turn for the worse and faces further threats from climate change, according to a new report.

Extending nearly 1000 kilometres from the northern tip of Mexico's Yucatan Peninsula towards the Bay Islands in northern Honduras, the Mesoamerican Reef is second in size only to Australia's Great Barrier Reef. 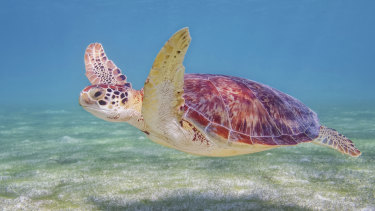 A turtle in the Cozumel reef in Mexico, part of the Mesoamerican Barrier Reef, the second largest coral reef system in the world.Credit:E+

Coral reefs develop over thousands of years and are vital to the survival and prosperity of countless marine species, but many, including the Great Barrier Reef, have been under pressure from global warming, scientists say.

The mosaic of coral reefs in the Western Hemisphere, also known as the Great Mayan Reef, experienced its first decline in overall health since 2006, according to a study of 286 coral reef sites in Mexico, Belize, Guatemala and Honduras.

"For the first time in 12 years of tracking the health of the largest barrier reef in the Western Hemisphere, the overall condition of this vital ecosystem has deteriorated," said the report by the Healthy Reefs for Healthy People Initiative.

The Reef Health Index, which synthesises ecological data into a Dow Jones-style index, showed that the coral's overall rating had fallen to 2.5 in 2018 from 2.8 in its previous rating report in 2016.

The Mesoamerican Reef's health had been improving since 2006, when scientists first began giving ratings to measure its overall condition and awarded it a 2.3 rating that year. Some 26 organisations were involved in compiling the data in the latest report.

"Over the past decade, we have documented a slow but positive recovery of the Mesoamerican Barrier Reef System," said Dr Melanie McField, director of the Healthy Reefs Initiative.

"But this recent decline highlights the need to step up local actions to improve water quality and increase fish populations," she added.

The report authors said that given "the alarming escalation of climate change threats to coral reefs, more urgent actions are needed to reduce CO2 and other stressors".

The biggest decline in reef health was owing to large decreases in commercial and herbivorous fish on the back of unsustainable fishing practices, particularly in Honduras, the report's authors said.

They also warned that the corals were now facing a crisis in the form of stony coral tissue loss disease, which is likely the most lethal disease to affect the Mesoamerican Reef.

The cause of the disease is not known, but scientists are alarmed by its rapid spread. It quickly affected 450 kilometres of reefs along the Mexican-Caribbean coast in 2018 and reached northernmost Belize reefs last northern summer, where it has remained.