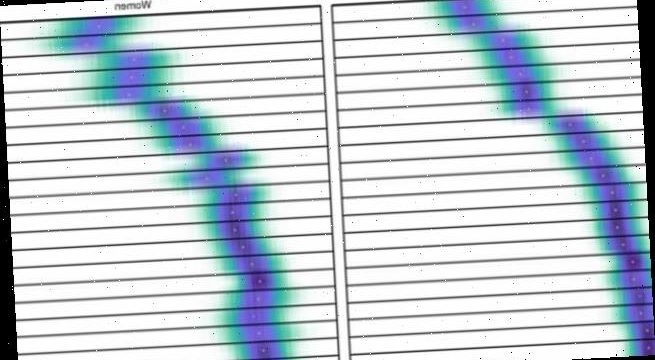 Men are women ‘face an EQUAL risk of dying from Covid-19’: Study shows opposite of scientific studies that found male chances of death are higher

Men and women have died of coronavirus in similar numbers, despite previous research suggesting the disease has a more severe effect on men, a study has found.

Scientists looking at deaths in European countries and Australia and New Zealand found there was no significant difference between the numbers of men and women who died during the first wave of the pandemic.

Among 21 countries there were 105,800 fatalities among men and 100,000 in women. There were variations in different countries, where some had more deaths among one sex than another, but overall the gap was slim.

Scientists have repeatedly found the opposite – that men appear to be worse affected by coronavirus than women do. A study by Imperial College London in April found women are less likely to die of Covid-19, while a report by Public Health England found death rates are 59 per cent higher among men.

But the new study, also led by researchers from Imperial College, did not find the numbers to back this up. They explained possible reasons could be that some countries have more women than men in care homes which could have led to more of them dying, while limited testing during the first wave could mean many cases among men were missed, for example.

Researchers also found England and Wales were two of the three European countries to suffer the most excess deaths during the Covid-19 pandemic.

Only Spain was hit by a worse death toll, witnessing a 38 per cent increase in fatalities above normal levels, compared to 37 per cent in England and Wales.

A staggering 47,104 people were killed by coronavirus between mid-February and the end of May in England and Wales, the study claims. This was out of 57,300 ‘excess’ any-cause deaths more than usual during the same time frame. The Department of Health’s official death count, however, only includes 43,000 people to date because it counts only those who have tested positive through the Government system and died within 28 days of the test.

This was higher than any other of the 21 Western countries studied by scientists led by Imperial College London — but only the second biggest percentage rise.

Scientists said high levels of obesity, inequality between the richest and poorest members of society, and an under-funded health service may have put the UK on course for more Covid-19 deaths than comparable countries. 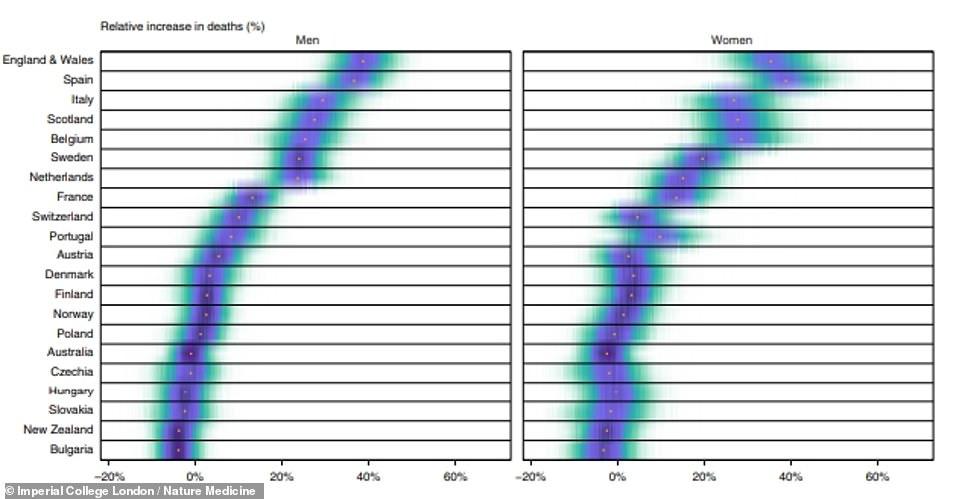 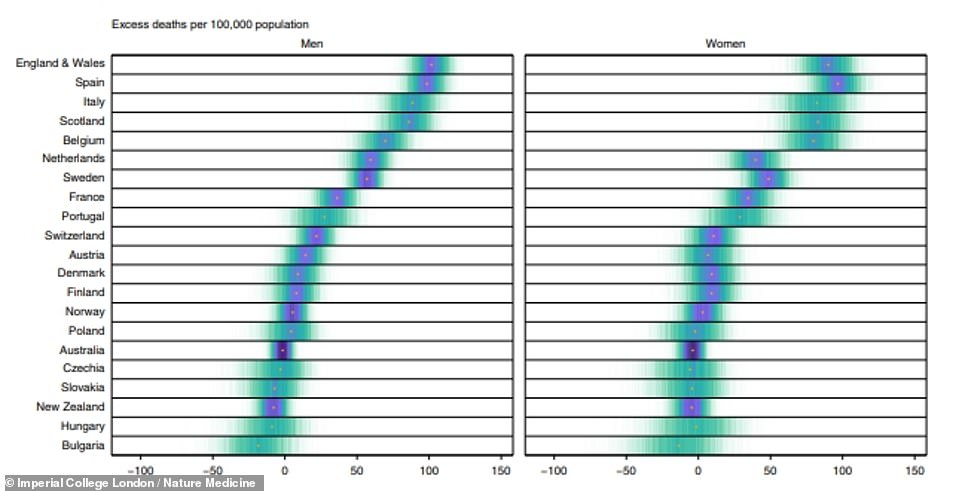 The number of excess fatalities per person in the population was highest in England and Wales for men and highest in Spain for women. Scientists suggested that care homes, where tests were hard to come by but deaths were common, containing more women may have been to blame for differences in sex – data suggests men become seriously ill more often 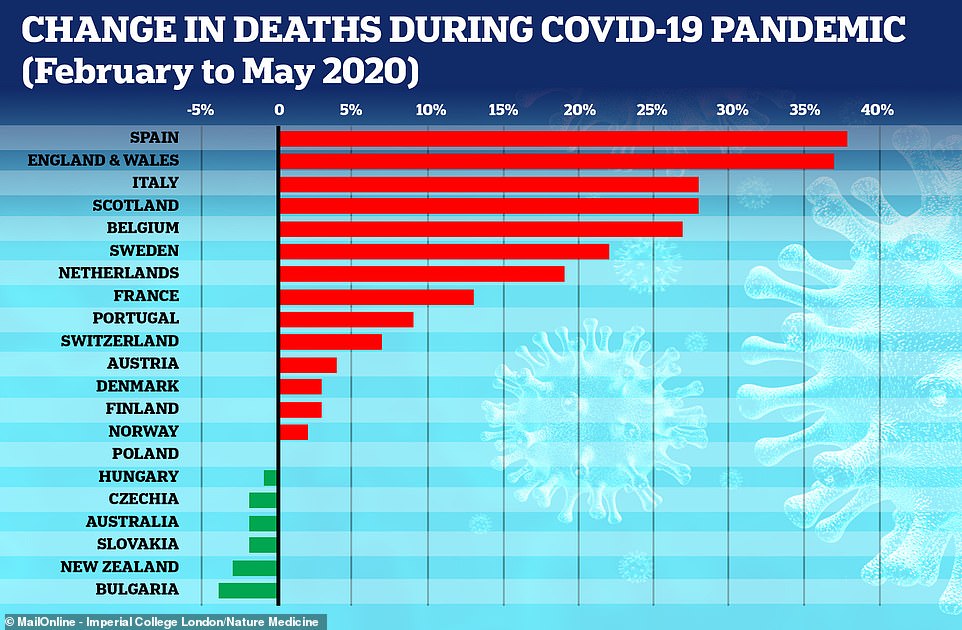 The study by Imperial College London showed that the percentage increase in people dying of all causes rose the most in Spain, by 38 per cent during the first wave of the Covid-19 pandemic, and then by 37 per cent in England and Wales

According to the study, published in Nature Medicine and led by Imperial College London. Data includes the period from mid-February to the end of May:

Professor Majid Ezzati, one of the paper’s authors from Imperial’s School of Public Health, said the similarity of data between the sexes could be down to missed Covid-19 diagnoses in care homes.

He said: ‘In some countries, the number of women who are in care homes is larger.

‘Testing may have been quite restricted and limited there and it may just be the case that some infections were missed.’

He also said that women, on average, tend to live to older ages compared to men and that other medical causes may have been a contributing factor.

Their findings contradict previous research showing men are more likely to die from the disease.

A University of Oxford and London School of Hygiene and Tropical Medicine-led study, published in May in NAture, found men were twice as likely to die from the virus as the opposite sex.

The analysis of 17.4million patient records in England included 5,707 deaths from Covid-19 between February 1 and April 25.

The NHS research also found that being over 80, or having a co-morbidity such as heart disease or uncontrolled diabetes were major risk factors for the disease. But it also showed sex and age played a huge role – with men 1.99 times as likely to die as women.

University of Oxford’s Dr Ben Goldacre, who co-led the study, said the findings should be used to decide policy when easing lockdown.

He endorsed the idea of letting young healthy Britons have some freedoms back but shielding elderly people for a while longer – something already proposed by the Government’s scientific advisers.

In addition, the researchers said that nations with the highest excess deaths were those who have had a lower investment in their health systems and health protection.

For instance, they said, Austria, which had very low numbers of deaths from all causes, has nearly three times the number of hospital beds per head of population than the UK.

Professor Ezzati added: ‘Long-term investment in the national health system is what allows a country to both respond to a pandemic, and to continue to provide the day to day routine care that people need.

‘We cannot dismantle the health system through austerity and then expect it to serve people when the need is at its highest, especially in poor and marginalised communities.’

Dr Jonathan Pearson-Stuttard from Imperial College London, who was involved with the study, said: ‘What the Covid 19 pandemic in that first wave has done is identify just how frail and vulnerable our society and our economy is to our public’s ill health.

‘So everything that has been [an] issue – whether that’s obesity, whether that’s relative inequalities and so forth – each of those are risk factors for worse Covid outcomes – and that’s as individuals or communities or whole nations.

‘On many of those aspects, our public health has lagged behind other countries for some years, and the Covid 19 pandemic has brought that to the fore.’

Britain has some of the highest obesity rates in Europe, with more than two thirds of adults overweight or obese to some degree.

And around one in five people live in poverty – some 14million people – according to a report this year by the Joseph Rowntree Foundation. 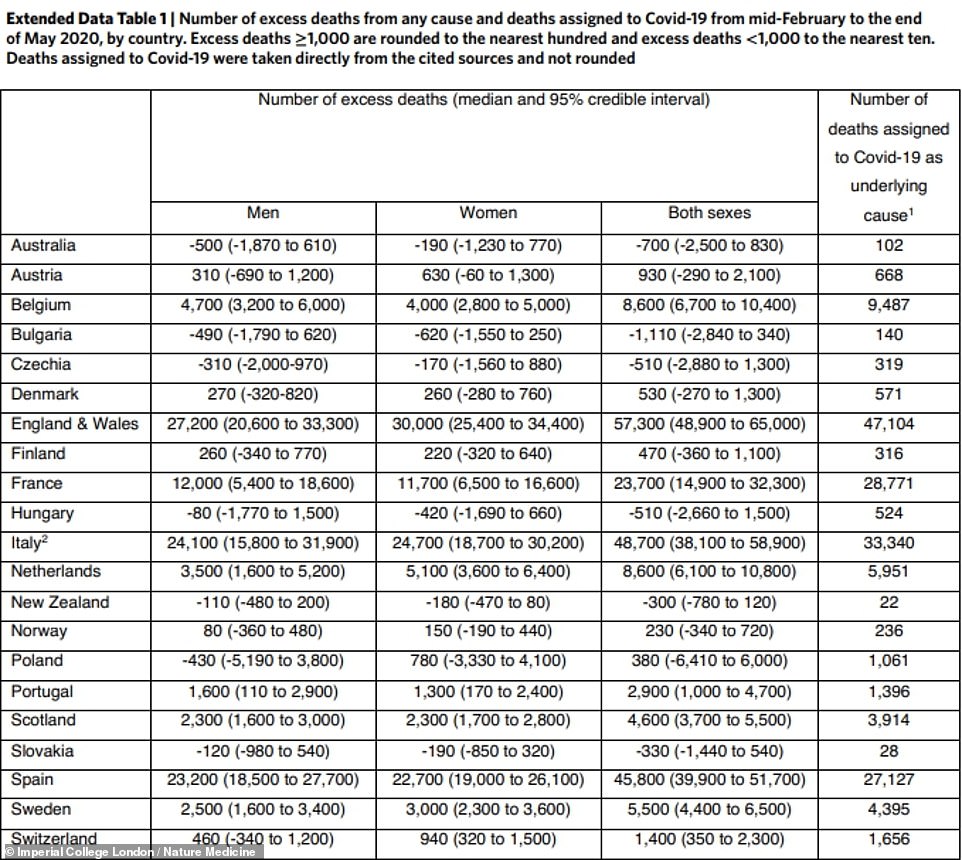 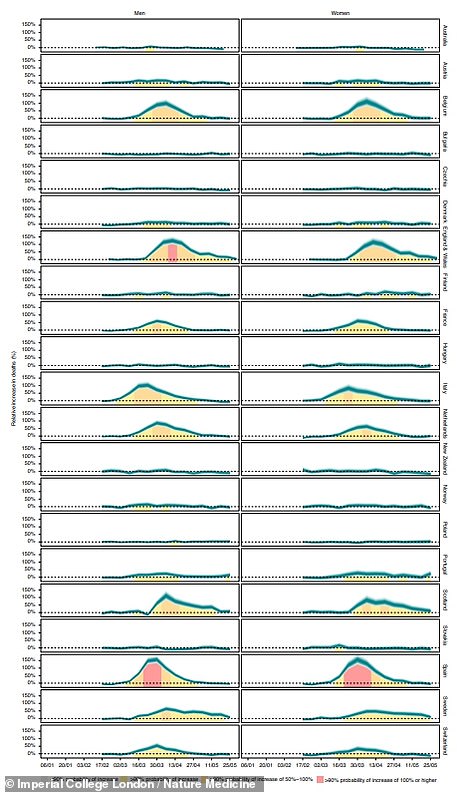 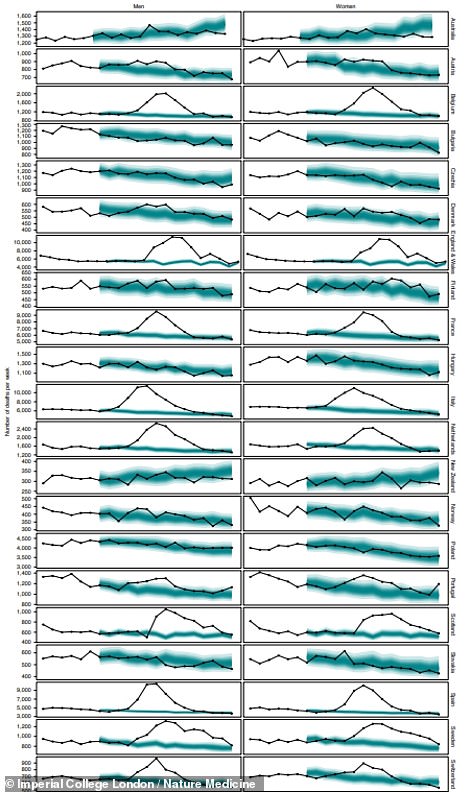 Data from the study (left) shows that England and Wales (sixth down from top) had one of the biggest peaks in extra deaths during April, with the graph increase smaller only than Spain’s (third up from bottom). In the graph on the right England and Wales’s line of deaths (seventh down from top) for spring this year can be seen deviating dramatically higher than the average for that time of year, which is shown in blue. The same trend is true of numerous other countries including Spain, the Netherlands, France and Belgium 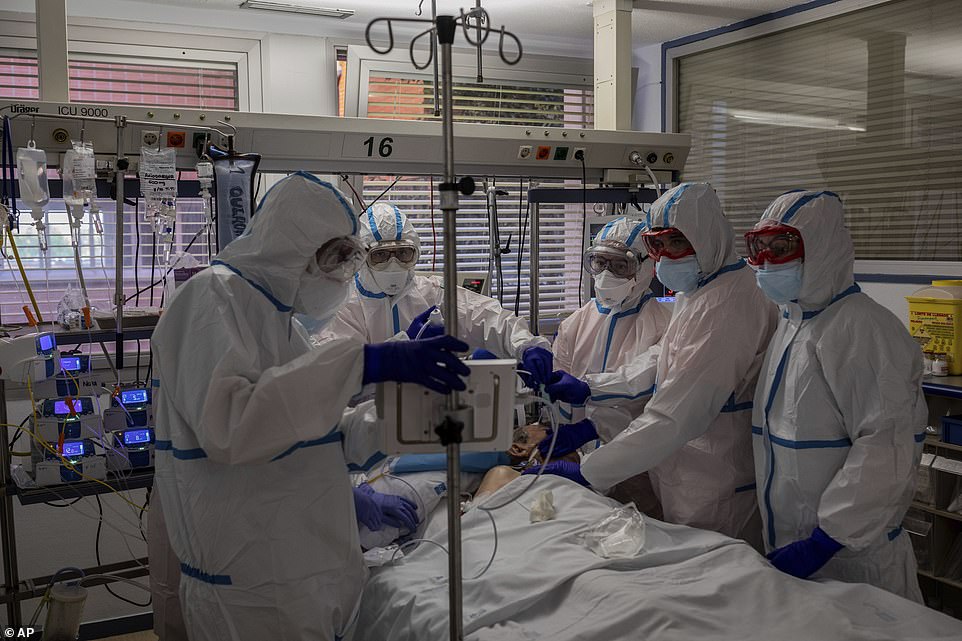 Doctors in Spain, which suffered the greatest proportional increase in deaths during the first wave of Covid-19, are pictured treating a coronavirus patient in the Severo Ochoa hospital in Leganes on the outskirts of Madrid (October 9)

Both excess weight and low income relative to the rest of the country are risk factors that dramatically increase someone’s chance of dying if they catch the coronavirus, and may have contributed to the UK’s high death toll, the researchers said.

Counting deaths up to the most recent available date – including the four months that have elapsed since the study ended – Britain has the fifth highest official death count in the world, with 43,018 people dying within 28 days of diagnosis. The real count is known to be higher.

The Imperial College study, which looked only at the earliest phase of the pandemic between February and the end of May, found England, Wales and Spain had nearly 100 deaths more than normal for every 100,000 people in their populations.

In Scotland, the excess death deaths rate was 84 per 100,000 people during the first wave, which was a 28 per cent increase from average expected deaths.

The authors estimate that an additional 206,000 deaths had occurred as a result of the pandemic in the 21 countries included in the analysis.

The research paper, titled ‘Magnitude, demographics and dynamics of the effect of the first wave of the COVID-19 pandemic on all-cause mortality in 21 industrialized countries’, was published in the journal Nature Medicine.