MEGHAN Markle and Prince Harry were booed and branded “fake royals” on the first stop of their “me me me” mini-tour.

The Duke and Duchess of Sussex were met by anti-fans last night when arriving at Meghan’s first address in the UK since stepping down from royal duties two years ago. 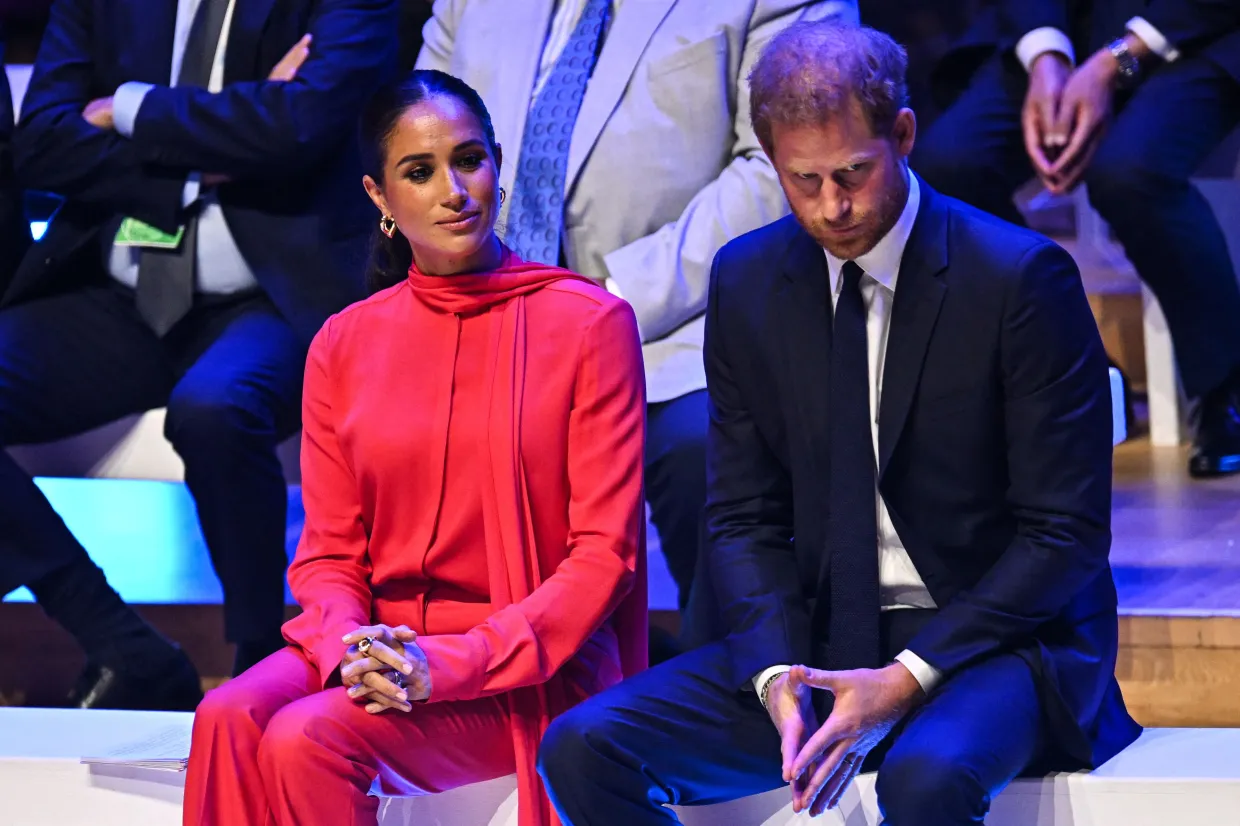 Demonstrators gathered outside the One Young World as they were driven 200 yards from a £500-a-room hotel to the youth gala at Manchester’s Bridgewater Hall.

As they got out of their car onlookers booed and waved anti-royal placards at the couple.

One protester was seen holding a sign that read: “FO Harry and Me-Gain Fake Royals”.

And one woman accused Meghan of being a “liar and a hypocrite” and of launching an “attack” on the Royal Family.

Janet, from Manchester said: “She’s a fake humanitarian and a fake feminist.

“She’s a social climber… she thought she could be a celebrity in the Royal Family and she’s the most toxic, divisive woman I’ve ever heard of in my life.”

“The Queen has been on the throne for 70 years and she’s had to put up with all this trouble. Meghan has used every card she can racism, mental health, feminism. She’s not a feminist, she’s just a hypocrite.”

Another demonstrator added: “It was odd that the whole speech was about herself. But that is Meghan.

Who the f*** does Meghan think she is after the vile manure she's flung at UK?

I’m a hair pro, 3 items wrecking your hair & why to stop using them

I’m nursery staff, this is what I mean when your kid was ‘exploring the room’

“We watched it and have no idea what the charity is actually about.”

Meghan, 41, referenced herself 54 times in the seven minute speech.

Her speech was branded nonsensical by Ingrid Seward, editor-in-chief of Majesty Magazine.

She said: “I can’t visualise or comprehend how the 2,000 young people understood a word of what she was talking about.

“It made no sense. It was all about her and related everything to herself.

“I don’t think she knew what she was talking about.

The Sussexes, who have been blasted for using gas-guzzling private jets, took the train from London Euston to Manchester yesterday afternoon.

Greater Manchester Police said the couple’s security would be paid for privately but several officers were there last night.

It was Meghan’s first speaking engagement in the UK since Megxit in March 2020.

Meghan and Harry flew into the UK from California on Saturday and stayed in Windsor at Frogmore Cottage — a stone’s throw from Harry’s brother William and wife Kate who have moved into Adelaide Cottage.

Meghan has sparked controversy with recent interviews, including one where she claimed she had been compared to Nelson Mandela.

The couple will be in Düsseldorf today to mark one year before Harry’s Invictus Games.