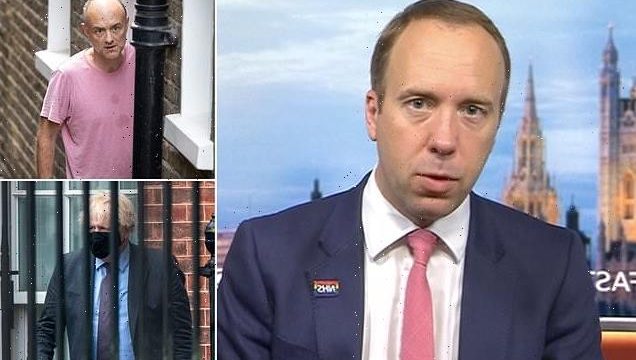 The Health Secretary dismissed the significance of a series of bombshell messages from Mr Johnson which were published by Mr Cummings last week.

He said that ‘at times of stress people say all sorts of things in private’ but ‘what matters most is how well you work together’.

The Cabinet Minister also said he is not embarrassed by Mr Johnson’s apparent assessment of his performance. 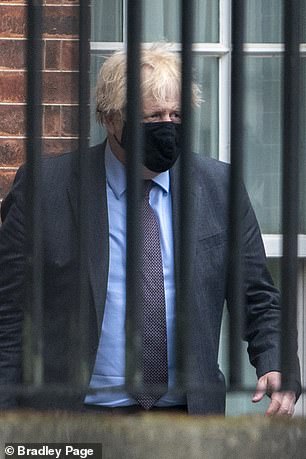 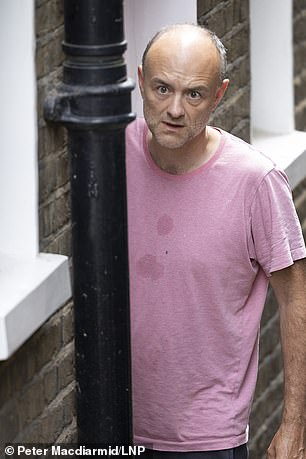 Mr Cummings, the PM’s former chief aide, stepped up his war with Number 10 last week when he published a number of messages sent to him by Mr Johnson.

In one exchange from March 27 last year, Mr Cummings criticised the Health Secretary over the failure to ramp up testing, with Mr Johnson replying: ‘Totally f****** hopeless.’

Another from the same day saw Mr Cummings complain that the Department of Health had been turning down ventilators because ‘the price has been marked up’. Mr Johnson said: ‘It’s Hancock. He has been hopeless.’

On April 27, Mr Johnson apparently messaged Mr Cummings to say that PPE procurement was a ‘disaster’, suggesting that responsibility should be taken away from the Health Secretary.

‘I can’t think of anything except taking Hancock off and putting Gove on,’ the PM said.

Downing Street has not confirmed or denied that the messages published by Mr Cummings are genuine.

Mr Hancock was asked this morning during an interview with the BBC Breakfast programme how he felt about the PM describing him as ‘hopeless’.

He said: ‘Honestly? It feels like ancient history, right? The vaccine programme is a huge success.

‘At times of stress people say all sorts of things in private. What matters is how well you work together.

‘You are referring to comments apparently from the Prime Minister. I work with the Prime Minister every single day. We work very strongly together, firstly to protect life and secondly to get the country out of this. That is what matters.’

Told that it must be embarrassing for him to know Mr Johnson had said such things, Mr Hancock replied: ‘No, it isn’t really because of all the things we have delivered together.

‘We are here talking about the success of the vaccine programme, right? That is something that I very much led from the department, working with the Prime Minister.

‘He has been a massive supporter of it throughout. Of course we have had obstacles and we have had people that we have had to deal with on the way.

‘But what I can tell you is that the delivery of that programme has been absolutely fantastic.’

Mr Johnson said last week that he has ‘complete confidence’ in Mr Hancock and ‘all of the Government who have been dealing with Covid-19 during the pandemic’.