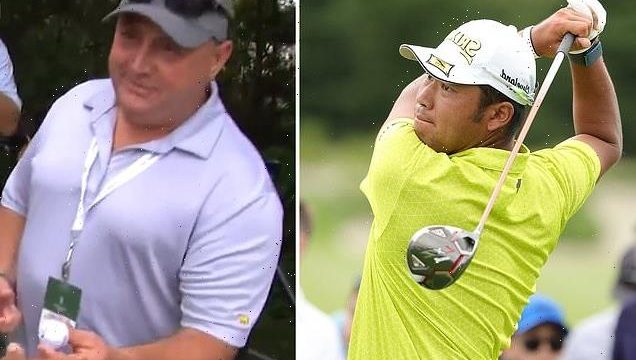 This is the moment a stunned fan was left with a golf ball in his shirt after Masters champion Hideki Matsuyama hit a wayward ball way off course.

Matsuyama, 29, was coming off a five birdie streak at the second round of The Northern Trust tournament in New Jersey on Friday when he suddenly hit a wayward ball on the tenth hole in Round Two of the tournament.

The ball had a few big bounces as it landed out of bounds before making its way up a man’s pair of shorts ahead of lodging itself in his shirt, to the shock of onlookers and Matsuyama himself. 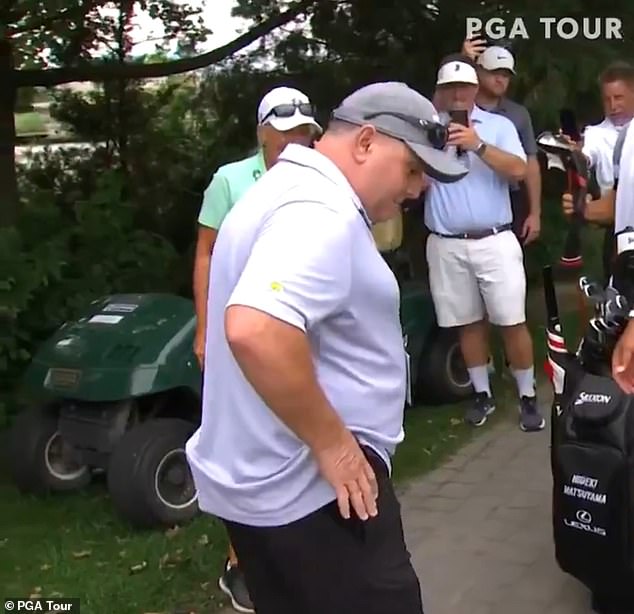 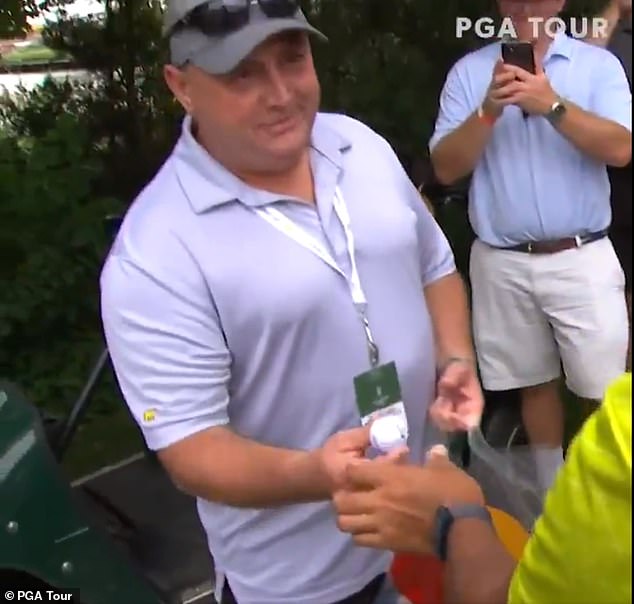 Matsuyama’s ball went wayward at tee-off when the ball went drastically right before bouncing out of bounds. After the golfer marked the ball’s approximate place with a tee, he signed the ball and gave it back to the fan

Everything appeared to start out just fine for Matsuyama, who had a score of -7, but only moments after hitting the ball off the tee, he was seen pointing right as he watched his ball fall off course.

The video cuts to a ball flying through the air before bouncing toward spectators.

The camera loses track of the ball as it bounces with even the commentators wondering where it went before replaying the moment.

People can be seen looking at a man who is slightly bent forward and standing rigid before releasing he was now a key piece in the game.

Commentators can be heard telling viewers that the man shouldn’t move before discussing his reaction. ‘Then he realizes, uh-oh uh-oh, I can’t move, I can’t move, but I’ve got it,’ they said of the man’s reaction.

When Matsuyama came to collect his ball, he was surprised to find the man had it up his shirt.

Looking at the ground confused before pointing to the man with a smile, he said: ‘You?’ The crowd roared behind him.

PGA Tours caught up with the man, who they only identified as a fan. He said, ‘[It] went between my legs, hit my knee, and somehow rolled up into my shirt.’

The golfer signed the ball and gave it to the man before finishing his game. 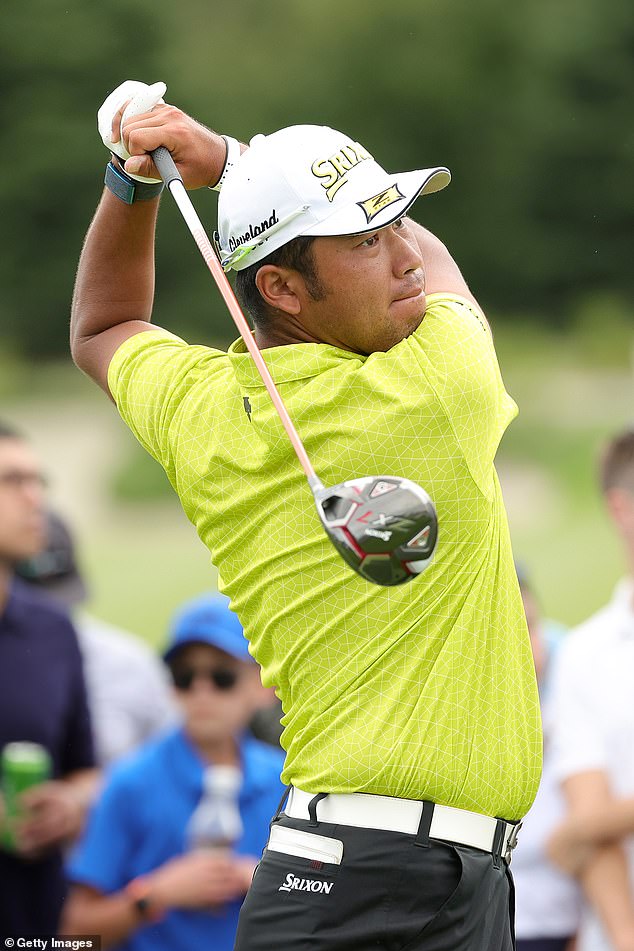 He finished the second round with a score of -5 and is currently tied with three others for 25th place. The tournament is scheduled to end the final round on Sunday, but may have to be pushed back due to Tropical Storm Henri

A similar instance happened in 2014 when Rory McIlroy hit a ball into a fan’s pocket.

Matsuyama finished his game with a -5 and is currently tied for 25th alongside American Lanto Griffin, Colombian Sebastián Muñoz, and Irish golfer Séamus Power.

The final round of The Northern Trust is scheduled for Sunday, but may have to be pushed back to Monday as Tropical Storm Henri rolls into the New York City area with heavy rain and potential flooding expected.

Matsuyama is currently ranked 18th in the world.

He recently came for a surprising win in at the Masters in April, becoming Japan’s ‘national treasure,’ according to CNN.

The golfer is ‘thrill’ to think there are young golfers in Japan watching him and hopefully one day follow in his footsteps.

‘It’s thrilling to think that there are a lot of youngsters in Japan watching today. Hopefully in five, 10 years, when they get a little older, hopefully some of them will be competing on the world stage,’ he said in a press conference.

‘I’m happy for them because hopefully they will be able to follow in my footsteps.’