A young man was infectious with COVID-19 when he twice escaped from a supposedly secure recovery clinic in Melbourne inside three days, a court has heard.

Police allege Nathan Hetherington posed a risk to the public last month when he escaped from a recovery centre near Albert Park Lake, while he was withdrawing from ice and agitated and upset at being held while infectious with COVID-19. 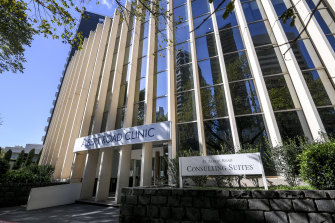 Melbourne Magistrates Court heard Mr Hetherington self-presented at The Alfred hospital on September 14 and had to be restrained by security when he tried to leave after testing positive to COVID-19.

The 22-year-old was issued with a detention notice and transferred to the Albert Road Clinic, a recovery facility that houses people with mental health problems, prosecutor Sergeant Geoff Adams said. But three times between September 16 and 18 he breached the centre’s “red zone” by kicking and damaging doors, and twice got out of the building and onto the street.

Then on September 18 he smashed a window to exit the clinic and rode on the back of a city-bound tram before he entered the grounds of the Royal Botanic Gardens. Police arrested him and he was taken to prison.

Police allege Mr Hetherington posed a risk to public safety while he knew he was COVID-positive. He is charged with reckless conduct endangering serious injury, criminal damage and other offences and is yet to enter a plea.

He appeared before court on Tuesday after 24 days in custody, and defence lawyer Tut Tut asked magistrate Gregory McNamara to consider imposing a sentence of time served if Mr Hetherington pleaded guilty.

Mr Tut acknowledged his client’s behaviour was “appalling”, but it came while he was withdrawing from the drug ice, which had exacerbated his mental health problems.

Mr Hetherington, a former labourer, had since tested negative for COVID-19 in nine out of 10 tests, Mr Tut said, and wanted to renew contact with his sisters and rehabilitate after the “wake-up call” of a stint in prison.

“The court can be confident he is now COVID-negative and the risk of him putting others in danger by being further reckless is eliminated, barring him getting re-infected,” Mr Tut said.

But Sergeant Adams said Mr Hetherington should serve more time in prison if he pleaded guilty because his actions were “self-centred” and deserved denunciation. Deterring others from similar offending was also important, he said.

“He has no care for anyone other than himself. Rehabilitation is not going to address that,” Sergeant Adams said.

The case is to return to court on Wednesday.

The Albert Road Clinic was the centre of a COVID-19 outbreak last year.