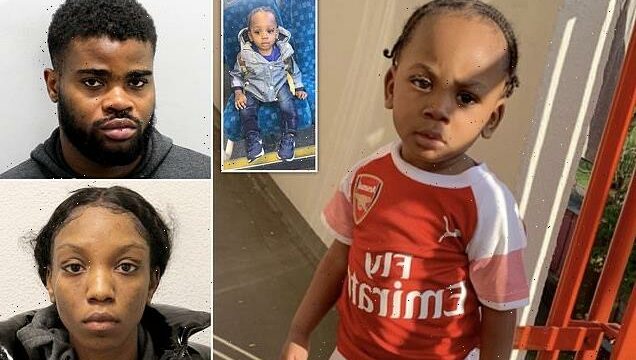 A child killer who murdered his girlfriend’s two-year-old son has been jailed for life with a minimum term of 25 years after the couple’s horrific abuse was captured on secret recordings.

‘Defenceless’ Kyrell Matthews was left with 41 rib fractures and internal injuries by the time of his death in October 2019 after weeks of cruelty at the hands of Kemar Brown and mother Phylesia Shirley, the Old Bailey heard.

Brown, 28, was convicted of murder after a trial earlier this month, while Shirley, 24, was acquitted of murder but found guilty of the alternative charge of manslaughter.

They appeared alongside each other in the dock on Friday as Brown was sentenced to at least 25 years in prison while Shirley was jailed for 13 years.

The toddler, who was non-verbal, could be heard crying and screaming on distressing audio files taken from Shirley’s phone and played to jurors during the trial. 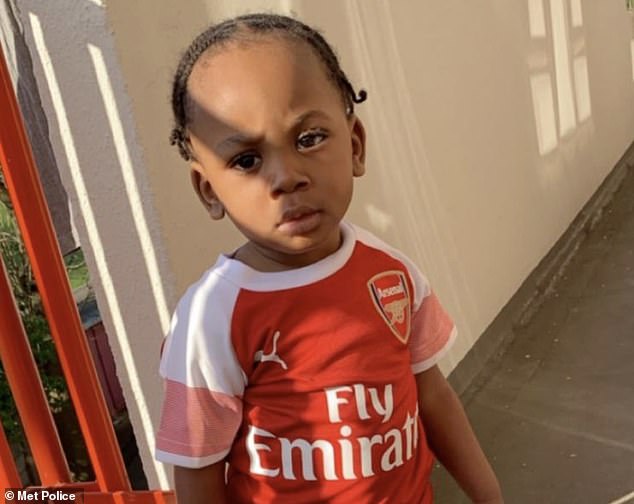 Multiple recordings taken over the final weeks of his life picked up the sound of Kyrell being hit repeatedly, with Brown saying: ‘Shut up’, and: ‘You have to ruin the fun.’

Another recording caught Shirley striking her son and causing him to break down in distress.

Prosecutor Edward Brown QC told jurors that the mother put her relationship with Brown above her own child.

The couple, who were unemployed at the time of Kyrell’s murder, were both cannabis users and are understood to have been visited by social services at least once. 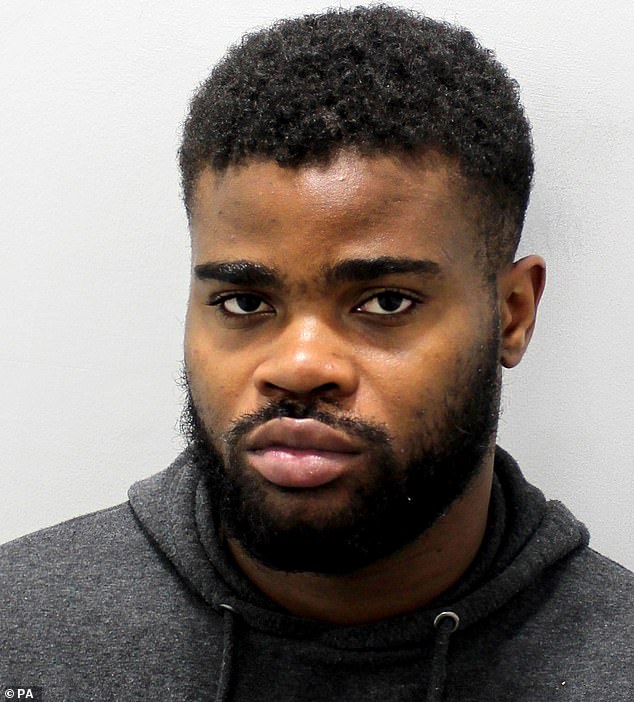 Violent thug Kemar Brown, 28, was found guilty at the Old Bailey of the murder of two-year-old Kyrell Matthews after subjecting him to months of beatings and taunting at a one-bedroom flat in Thornton Heath, south London 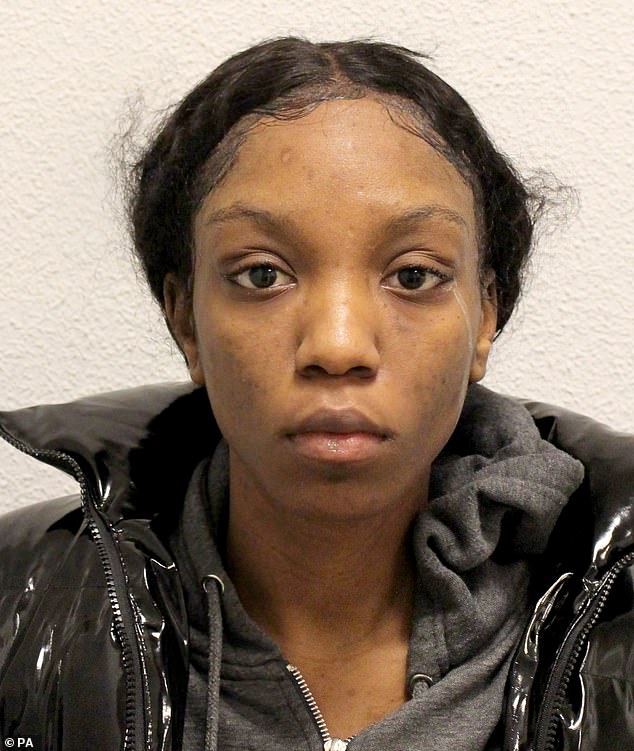 Officers were able to uncover audio evidence of both adults hitting Kyrell on multiple occasions by listening through secretly mobile phone recordings made by a paranoid Phylesia Shirley, 24, (above) who suspected her partner was cheating on her

‘(Shirley) was prepared to reject what should have been motherly care in protecting Kyrell in favour of abuse by her – his own mother – and in favour of the abuse carried out by a man she knew was abusing her child,’ Mr Brown told jurors.

‘The truth is that his death came when once more he was abused in that flat, once more in a very similar way, causing very similar injuries, except on this occasion it was so much more serious, the abuse and the results were catastrophic.’

In a 111 call made after Kyrell collapsed at home on October 20 2019, Shirley sobbed as she was told by a clinical adviser to use both hands and ‘push down fast’ and ‘go for it’.

Both defendants, from separate addresses in Thornton Heath, declined to give evidence during trial, but the court heard Brown’s defence was that the injuries inflicted were the result of incorrect advice from the operator on how to resuscitate Kyrell.

Paying tribute to Kyrell outside court after the couple were convicted, his paternal step-grandmother Christine Ernest said he was ‘the most loving little boy, always smiling’.

Jurors were not told that police had been called to an earlier domestic incident but no offences were identified and Kyrell was said to have appeared ‘safe and well’.

A passer-by had alerted officers on July 17 2019 after hearing shouting and screaming coming from their flat, with a female voice saying: ‘Stop hitting my face.’

It followed an attack in May 2019 when Kyrell suffered a significant injury to the side of his face and spent five days in Croydon University Hospital.

The hospital carried out an investigation and found Shirley’s explanation that the little boy had fallen off a sofa and hit his head on a highchair was ‘plausible’, police said.

Eleven out of the 12 jurors returned to court on Friday to see the couple being sentenced, while members of Kyrell’s paternal family sat together in the well of the court.

Brown’s lawyer Mark McDonald said the audio clips were ‘horrendous’ and argued ‘the only mitigation’ was that he had not intended to kill the boy by inflicting the injuries.

Louise Sweet QC, defending Shirley, said the mother had admitted to allowing her son’s death prior to the trial, showing she ‘accepted at core the heart of her criminality, which was failing to protect Kyrell’.

The barrister added that Brown appeared to have played the ‘dominant’ role in the relationship and was ‘older and more sophisticated’ than Shirley.

Passing sentence, Judge Lucraft said: ‘Many others looking from the outside into this case, and particularly those who desperately seek to have a family, will struggle to understand how those primarily responsible for this little boy’s nurture and day-to-day care can have acted so cruelly to take his life.

‘He was just a month over his second birthday when he was killed. The photographs and video clips show him to be a bright and bubbly little boy.’

The judge described the recordings in their entirety as ‘harrowing and deeply upsetting’, and said there had been ‘an element of degradation and or sadistic behaviour’ towards the toddler.

‘You should have been caring for this two-year-old boy, not abusing him,’ he told Brown.

He also told Brown, who has multiple previous convictions, his conduct towards Kyrell had been ‘cruel and brutal’ and hr described the catalogue of injuries inflicted against the toddler as ‘truly shocking’.

He added it is clear that Shirley had taken part in the violence, telling her: ‘Any normal parent’s response is to love and protect their child. You did neither, and it really mattered.’

The Metropolitan Police said finding audio recordings of the abuse – thought to have been secretly taken by Shirley to check whether Brown was cheating on her – made the case ‘unique’ and ‘especially distressing’.

Detective Chief Inspector Kate Kieran, of the Met’s Specialist Crime, said: ‘This was a horrific case and the injuries inflicted on Kyrell were truly appalling.

‘It is impossible to understand how someone can brutalise a child in this way. This was not some sudden loss of temper – these injuries show that the abuse of Kyrell went on and on. It was during one final brutal assault that Kyrell’s sad, short life was brought to an end.’

Samantha Yelland, from the Crown Prosecution Service, said: ‘This was a violent, determined and repeated pattern of assaults against a defenceless young child. Kyrell Matthews would have been in significant discomfort in the days before his death, and tragically he would have died in pain. As a mother, Phylesia Shirley should have protected him, but instead along with her partner, she subjected him to countless assaults in their own home.’