Fijian officials are beginning to count ballots with voting closed for what is expected to be a tight election amid early concerns about low voter turnout.

The Pacific nation marked Wednesday as a public holiday to encourage people to vote in a race that is seen as a contest between two former coup leaders. 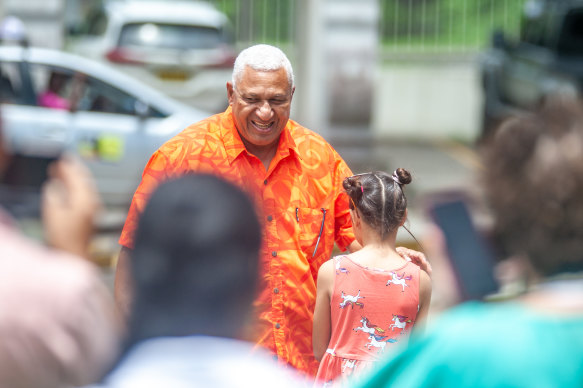 Prime Minister and FijiFirst Party leader Josaia Voreqe Bainimarama on his way to cast his vote on December 14 in Suva.Credit:Getty Images

Bainimarama has been in charge since he instigated a coup in 2006 and took over the prime ministership a year later.

Bainimarama said he would “of course” respect the outcome of the democratic election when he cast his vote but concerns over a possible coup remain in a nation marred by takeovers.

He maintains he’s confident he and his FijiFirst government will be able to retain power. 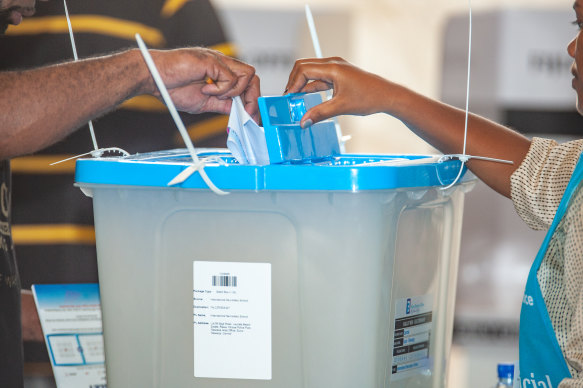 Fiji’s general election holds interest for nations across the South Pacific at a time of rising tensions over China’s influence in the region.Credit:Getty Images

Sitiveni Rabuka, also a former leader who initially took power through a coup in 1987, expressed doubt the prime minister would accept defeat.

Rabuka heads the People’s Alliance party. He said there was little prospect of a coup, even if the prime minister decided to contest the result, after Fiji’s military commander told his soldiers to respect the outcome of the election and said anything less would be an affront to democracy.

The Pacific nation has experienced four coups since it gained independence in 1970.

“A successor from an opposition party should be accepted. It is a normal process in democratic systems.”

However, some voters remain concerned about potential repercussions if they speak out against the government.

One, who gave his name as Jack, told AAP he wanted a change in government but both frontrunners were coup leaders.

“They’re both thieves. They took the government without permission,” the 50-year-old said.

“I want a change in government but when we are given a choice between two thieves, what hope is there for the future?”

Rabuka and NFP leader Biman Prasad believe there is a mood for change.

“I think it’s going to go very, very well for us,” Rabuka said on Wednesday.

Voting is not compulsory but Fijians have been given a public holiday and encouraged to cast their ballot.

Lines stretched more than 300 metres at some polling stations an hour after voting opened but turnout dwindled throughout the day.

Supervisor of Elections Mohammed Saneem said turnout was not promising with just over half the eligible Fijians casting their votes as of an hour before polls closed.

It was significantly down from the 72 per cent who voted in 2018, and a further slide from the almost 85 per cent in 2014, when democratic elections were reinstalled after eight years.

“It is still, by Fiji’s standards, not acceptable,” Saneem said.

At his midday media update, Saneem urged: “Let’s spend the next six hours getting our family members to get out and vote.”

Preliminary results are expected on Thursday night, with official results in about four days.

Bainimarama and FijiFirst are running on their record during COVID-19 and a strong economy. He’s also spruiked free education, greater access to medical care and better infrastructure under his government.

Rabuka and opposition parties are arguing Fiji’s infrastructure and essential services are dilapidated.

They say poverty and inequality have increased while freedoms have been quashed by a prime minister they brand a dictator.

About one quarter of Fijians live in poverty and this jumps to more than 40 per cent in rural regions.

Cost of living pressures are also biting with inflation eclipsing five per cent and the price of food more than doubling since the pandemic started in some instances.

This article was made possible through the Melbourne Press Club’s Michael Gordon Journalism Fellowship Program.