The 3rd Lord Vestey, who has died aged 79, was the half-Australian heir to a meat fortune, the surviving great-grandson of Dame Nellie Melba, and the head of one of the richest families in Britain who, for most of his life, were owners of vast holdings in the Northern Territory and Queensland. Within four generations, the Vesteys went from a Merseyside slaughterhouse to a magnificent Cotswold country house hosting titled grandees and members of the innermost circle of royal courtiers. 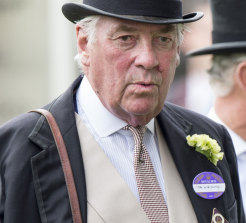 The founding Vestey brothers, Edmund and William (Sam’s great-grandfather and the first Lord Vestey), were sons of a Liverpool provisioner; at the end of the 19th century they ventured abroad to create a conglomerate encompassing cattle properties in Argentina and Australia, processing, canning and cold storage, the Blue Star shipping line and a chain of more than 2000 Dewhurst butcher’s shops on British high streets.

A revenue official described dealing with the Vesteys’ tax affairs as “like trying to squeeze a rice pudding”. Yet even the House of Lords confirmed its legality. As Lord Vestey put it, “This matter has been taken to the highest court in the land and as far as I am concerned it is now settled.”

By then other financial strains and market changes were also afoot: the Dewhurst business succumbed to supermarket competition, and the Blue Star line and many other assets were sold off over the following years.

Sam Vestey’s stewardship from 1995 to 2015 was a time of transition and the group’s remaining portfolio included cattle breeding and sugar-cane farming in Brazil, a range of food businesses that included Donald Russell, the mail-order butcher, and vineyards at The Lane in the Adelaide Hills and Delatite in Victoria. “It’s much more fun tasting wine than corned beef,” he said.

Pamela retreated to Australia and her grandmother’s country house, Coombe near Lilydale with Sam and his younger brother, Mark, where they attended the local school. They returned to England where the boys went to Eton. At 13, on the death of his grandfather, Sam succeeded as 3rd Baron Vestey.

He served in the Scots Guards and spent a few years working for the family at their Tomoana meat works at Hawkes Bay, Riverstone in Sydney and then at many other plants across the word.

“I did every job on the line before coming home.” He claimed to be the only trained butcher to sit in the House of Lords. He became a director of Vestey Group in 1971, taking wider public roles as chairman of the Meat Training Council and president of the Institute of Meat. As clever as it might sound, his friends never called him Spam.

The family attracted national attention in August 1966 when the Gurindji people walked off Wave Hill, the 3000 square-kilometre station, south-west of Katherine, bought by the Vesteys in 1914. They demanded equal pay and benefits for Aboriginal workers. It was still, astonishingly, legal to pay Aboriginal Australians in tea, tobacco and other rations and the treatment by Vestey managers was symptomatic, rather than atypical, of Australian managers at the time.

Then in 1975, Gough Whitlam, handed the Gurindji a lease over a small portion of Wave Hill, pouring its sand into the hand of their leader, Vincent Lingiari, the beginning of the end of Terra Nullius. In 1993, Paul Kelly and Kev Carmody would recall the episode in From Little Things Big Things Grow: “British Lord Vestey and Vincent Lingiari/Were opposite men on opposite sides”

By the early 1990s, the group’s main London operating company, Union International, led by cousin Timothy Vestey, had invested heavily in the property boom. £430 million in debt, it went into administration. The Dewhurst butchery chain, Blue Star, Wave Hill and eight other properties in the Territory and Queensland were sold off for some $60 million. Sam also sold his collection of English masters.

But much wealth remained. The Vestey family fortune, though diminished from its peak, was estimated in 2020 at more than £700 million. Stowell Park, the family seat since 1921, built in 1600 and set in 5500 acres in Gloucestershire’s Cotswold Hills, remains in the family, as comfortable and almost as grand as Vestey’s friend, the Prince of Wales’s Highgrove 40 minutes away.

The family remained, on a personal level, at the epicentre of the establishment; as close to the Royal Family as Melba had been in the reigns of Edward VII and George V. Like their mother, grandfather and great-grandfather Charlie Armstrong, a superb horseman, Sam and Mark took to the saddle but, more conventionally, with racing and fox-hunting.

And polo. As a player-manager – Sam and Mark dominated the high-goal game with their Stowell Park team in the 1970s. The estate was also home to the Gloucestershire Gipsies, a previously wandering 11 of which Sam was president. A successful owner and breeder, he was, from 1990 to 2011, a popular “benignly statesmanlike” chairman of nearby Cheltenham racecourse, where his blue silks occasionally graced the winner’s enclosure.

In 1999 Sam was appointed Master of the Horse, the third most senior office at Court, and held the post until 2018 when he was honoured with a GCVO, the traditional reward for this post. The family enjoyed the friendship of the Royal Family as Melba had during the reigns of Edward VII and George V. Sam’s wife, Celia, was a godmother to Prince Harry.

Sam first married in 1970 to Kathryn Eccles; the marriage was dissolved in 1981 after she fell in love with Eduardo Moore, a legendary Argentine player in her husband’s polo team. At the end of 1981 he married Celia Knight, sister of Henrietta, a leading National Hunt trainer. Celia died suddenly, at 71, in November 2020. He is survived by Saffron (patron of the Melba Opera Trust) and Flora, daughters from his first marriage; and William (who becomes the 4th Baron), Arthur, and Mary from his marriage to Celia.

He wore his great privilege lightly, was a meritocrat, very good company, and a devoted husband and brother. He was also abidingly proud of his Australian descent. In his industry history, World on a Plate (2013) Stephen Martyn recounts a gathering in a Sydney pub where a local challenged Vestey: “How would you know? – you’re a Pom.” Sam pulled out a $100 note and pointed to the picture of Melba, “She is my great-grandmother, and that makes me an Aussie.” 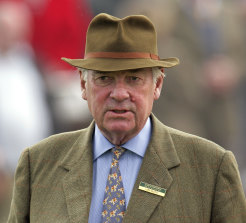 In 1973 Pamela Vestey settled at Coombe and the family regularly visited. Melba had come across St Leonards in 1909 on her way to her father’s place, St Hubert’s at Yering. She renamed it Coombe Cottage. After John Grainger, Percy’s father, had transformed the house and William Guilfoyle the garden, it was no longer really a “cottage” and for more than a century became a much-loved second home.

In 1999 vines were planted, as Melba’s father had done at St Hubert’s and in 2002 they produced a pinot noir; in 2009 Nellie Melba Blanc de Blancs appeared. Melba had told her son, Sam’s grandfather George Armstrong, that she wanted Coombe to remain as untouched as possible. After Pamela’s death in 2011, Sam and Mark assumed the mantle at Coombe. Although the house remained for the family, in 2014 they opened the garden to the public and built a restaurant. As Ann Blainey, author of I Am Melba, observed, “the house feels as though Melba had just walked out of it.”