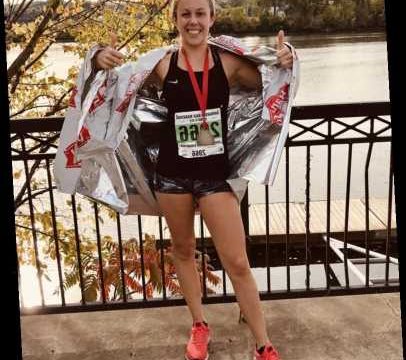 This story discusses suicide. If you or someone you know is at risk of suicide please call the U.S. National Suicide Prevention Lifeline at 800-273-8255, text HOME to 741741 or go to SpeakingOfSuicide.com/resources for additional resources.

After only a few hours of work, Caitlin Barber felt exhausted and overwhelmed. Barber, 27, a dietician at a nursing home in Saugerties, New York, once enjoyed long-distance running and completed at least eight half-marathons. But after months of COVID-19 symptoms, hours at work leaves her wiped out.

“My job has been really great, but I’ve tried three times to go back and even a couple of hours completely wears me out,” she told TODAY. “I have been negative for COVID since the beginning of June and my symptoms will not ease up.” Barber — a long hauler, a coronavirus patient who has months of symptoms — first experienced signs of the virus on March 30 and received a positive COVID-19 diagnosis on April 3. Lately, she’s experienced brain fog, hair loss, eye pain and headaches. But she’s also grappling with her mental health and experiences depression, anxiety and post-traumatic stress disorder (PTSD), conditions she never had before.

“I’m just so isolated,” she said. “When you get depressed you have these terrible, terrible thoughts that run through your mind. And the thought about going back into the world with possibly a second wave … is really scary.”

Her husband and family provide emotional support for her and she takes medications and receives therapy. But she’s also noticed that when her physical symptoms flare up, her mental health worsens.

What experts know about mental health and COVID-19

As the COVID-19 pandemic continues, researchers discover more about the way it impacts people. Yet, there still is much to be learned, including how it affects mental health.

A study from researchers in Italy published in the journal Brain, Behavior and Immunity found that 56% of 402 adults who survived COVID-19 experienced at least one mental health condition a month after hospital treatment. Experts remain unsure whether COVID-19 changes the brain, making people with it more likely to develop mental health conditions, or if the conditions occur indirectly from being ill.

“The first thing would be: Is there a direct effect of the virus on the brain or the mental health circumstances? And I think it’s absolutely possible,” Dr. E. Wesley Ely, co-director of the Critical Illness, Brain Dysfunction and Survivorship (CIBS) Center and a professor at Vanderbilt University Medical Center in Nashville, told TODAY. “The answer to this question might be very different in a year.” Ely said that experts know that COVID-19 does impact the brain often by causing an inability to smell, delirium and brain fog. But being sick with COVID-19 could also indirectly influence mental health.

“People are lonely. They’re isolated. They have no loved ones around them,” Ely said. “That leads to symptoms expressed like depression. It leads to anxiety disorders.”

What’s more, experts know that being in the intensive care unit impacts mental health. Patients and their families often developed something called post intensive-care syndrome (PICS), which has both physical and mental symptoms.

“For people who are in the ICU for a long time, for other reasons, or people who have chronic illnesses have higher occurrences of mental health conditions,” Ely said.

Marcus Tomoff became sick with COVID-19 in the beginning of June and his symptoms — including constant headaches, dizziness, pain surging from his lower back to neck, numbness, chest pains, nausea, weight loss and struggling to breathe — continue to linger. While trying to manage the pain requires a lot of effort and exhausts him, he’s also dealing with guilt. He believes he gave COVID-19 to his mom and stepfather. Dropping them off at the hospital for treatment felt just awful.

“I had to drive myself home, crying, and dealing with my pain alone,” the 28-year-old who started the clothing brand Lyfe Thryver to raise money for COVID-19 survivors in Tampa, Florida, told TODAY. “That is what actually affected me, that guilt.” Tomoff also faces isolation. Some of his friends shunned him after learning of his diagnosis.

“People say they never want to see me again,” he explained. “You feel very alone. You feel very depressed and anxious.”

Tomoff finds support through Survivor Corps, an online support group of more than 90,000 COVID-19 survivors. Having a community helps him and others cope with their lingering symptoms and mental health challenges.

“Survivor Corps saved me in so many ways,” Andréa Ceresa, 46, an office manager and singer in Branchburg, New Jersey, told TODAY. “Seeing people in the group who have gotten better and gotten treatment has given me hope.”

Since becoming sick more than 130 days ago, she’s had tinnitus, nausea and neuropathy (weakness in the hands and feet from nerve damage) among other symptoms.

“I’ve had some suicidal thoughts. I’ve been at the lowest place in my life,” Ceresa explained. “I have severe panic attacks, maybe every other day. I’ve never had a panic attack before in my life.”

She feels nervous about going to the grocery store, when she sees people without masks, but her biggest worry is about whether she’ll ever feel good enough to perform again.

“My biggest fear is that I will not get better,” she said.

Other long haulers share that worry. Jennica Harris had a positive COVID-19 test on April 13 and has had symptoms since, including racing heartbeat, back pain, cold intolerance and exhaustion. She now has anxiety, depression, PTSD and some obsessive compulsive behaviors.

“I don’t leave our house,” the 33-year-old from San Marcos, California, told TODAY. “We went to the car wash and I panicked because I was thinking who went through this car wash without a mask on … It just plays out over and over.” Kayleen Alfaro has been sick since early March and thinks she has at least 40 different symptoms, including unrelenting headaches and constant nausea. Feeling ill all the time impacts her mental health.

“There are days, I don’t even know how I do it,” the 36-year old from Sacramento, California told TODAY. “I just feel like I’m in a nightmare. I’m just not myself.”

Like Harris, Alfaro often experiences a racing heart beat and she panics that she’s having a heart attack. That causes her anxiety to spike, but overall she feels blue.

“This is leading to depression for me because of just feeling so down about being sick,” she said. “I don’t know what’s going on with my body. I don’t know if there’s damage. I don’t know if this is going to last forever. Nobody has helped me … I just honestly think nobody is educated enough on this yet.”

While they are all undergoing treatment for their mental health, they agree that having support and sharing their stories help.

“It’s imperative that we bring awareness,” Harris said. “That recovered number that you see — well, it’s great. But you don’t know what recovered looks like and this is what I’m showing you. It’s a challenge every day. It’s hard to get out of bed.”