London: Julian Assange has again interrupted his extradition hearing, claiming that he never put informants lives at risk, when he published hundreds of thousands of State Department documents on his WikiLeaks website.

The 49-year-old intervened in his extradition hearing for the second time since it's resumption at the Old Bailey in London last week, earning him another stern reprimand from the judge hearing his case.

Assange cried out from the dock after lunchtime during evidence being given by former military analyst Daniel Ellsberg who leaked the classified Pentagon Papers that revealed the US government knew it would not win the Vietnam War based on existing resources. 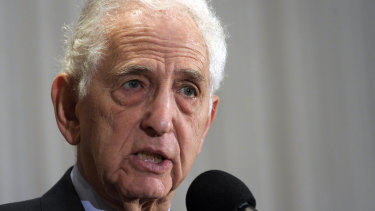 Ellsberg was pursed under the Espionage Act as is Assange. All charges against him were eventually dropped and he has become a vocal supporter of Assange as well as Chelsea Manning, who leaked to Assange the hacked files. Ellsberg also supports Edward Snowden who leaked classified documents he had access to as a CIA subcontractor.

The United States government has asked Britain to extradite Assange to face 18 counts of violating the Espionage Act with most charges relating to computer hacking.

However, the US government is pursuing Assange over the publication of unredacted documents which exposed the names of informants. The distinction the US government is repeatedly trying to make separates Assange from the press which also published information revealed by WikiLeaks but without naming journalists, human rights advocates and dissidents who were informing on their governments and repressive regimes. 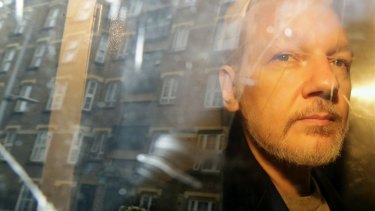 Julian Assange is taken from court in London in May.Credit:AP

Ellsberg confirmed that when he leaked his cache of documents, he withheld four volumes of documents. But he said that the only withheld these because they related to negotiations which he did not want to jeopardise.

Assange's outburst came as the QC representing the US government, James Lewis, was cross-examining Ellsberg.

Lewis cited an Ethiopian journalist who fled the country after being interrogated and threatened once he was outed as having been a source for the United States. 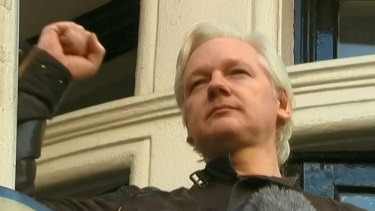 District Judge Vanessa Baraitser reprimanded Assange, for the second time in as many weeks.

"I have warned you about this before, you are not entitled to interfere like this," she said.

The extradition hearing has previously been told that Osama bin Laden had WikiLeaks documents in his compound on the night that he was killed by US Navy Seals in a dramatic helicopter raid in Pakistan in 2011.

The court also heard from former Der Speigel journalist John Goetz, one of the original members of the consortium of media outlets to partner with WikiLeaks and publish the contents of their documents.

Goetz, a US journalist based in Berlin said that Cryptome and not WikiLeaks was the first website to publish the unredacted documents in full.

When asked under cross-examination, he said he had left Der Spiegel when it combined with Le Monde, The New York Times, The Guardian and El Pais to condemn WikiLeaks decision to publish the names of informants, marked as "Strictly Protect" in the official cables.

Our weekly newsletter will deliver expert analysis of the race to the White House from our US correspondent Matthew Knott. Coming soon. Sign up now for the Herald‘s newsletter here, The Age‘s here, Brisbane Times‘ here and WAtoday‘s here.