This week he made headlines again by getting bitter on Twitter, complaining: “London is no longer an English city.” 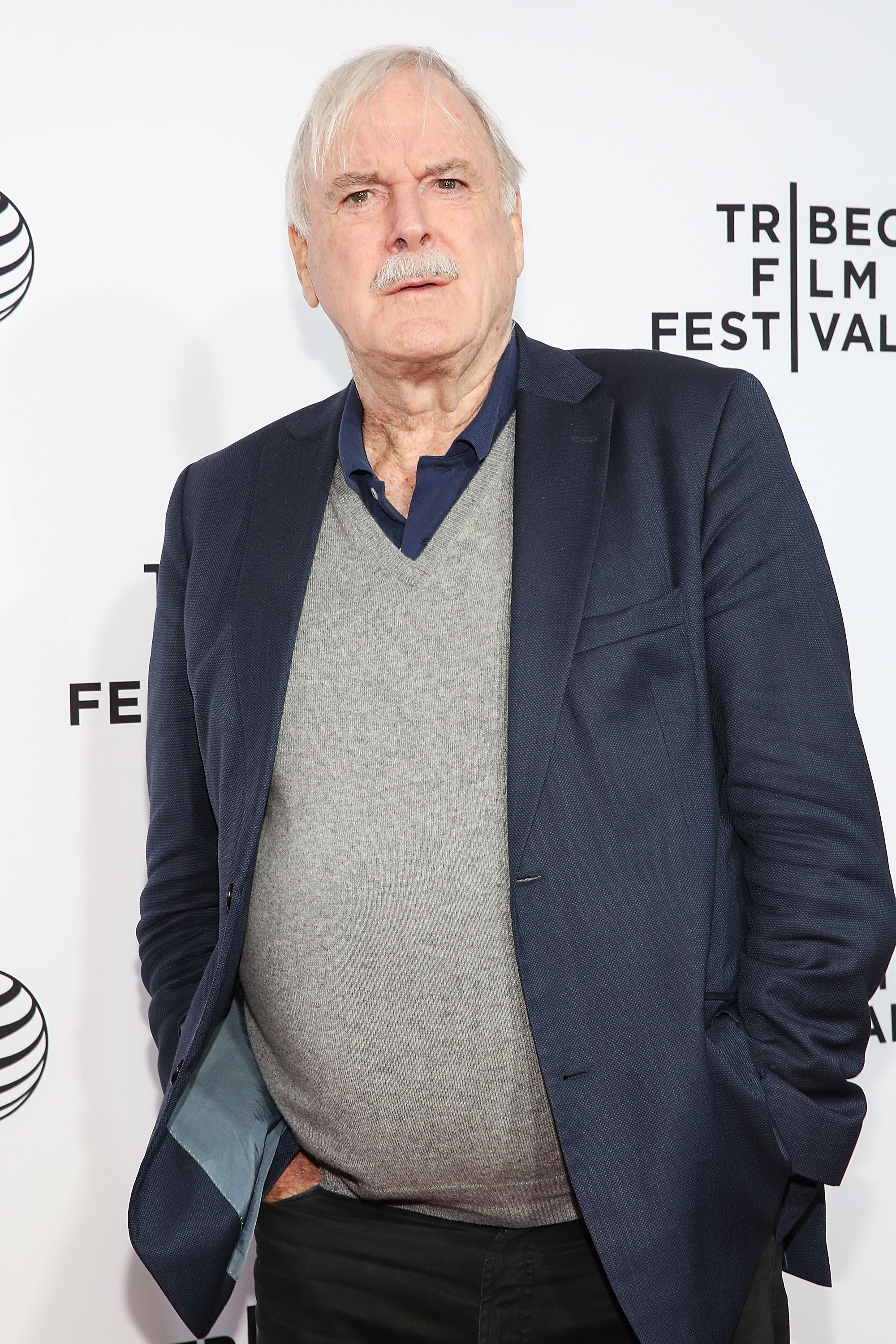 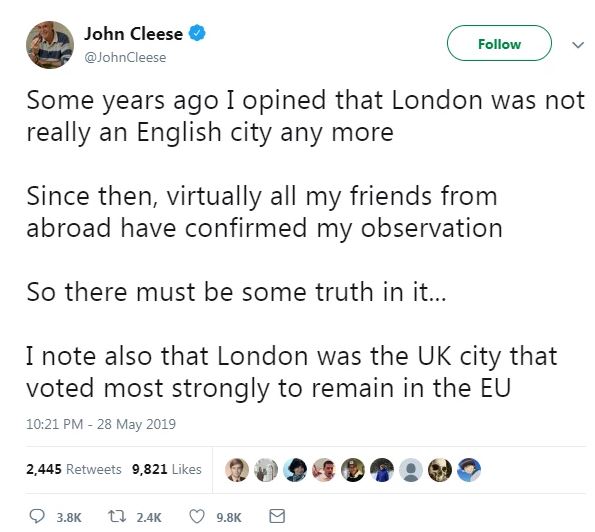 He should know all about great institutions that are no longer what they were.

Cleese is a British and global comedy giant of the 20th Century, reduced to an unfunny, small-minded expat prat of the 21st.

Once, the writer and star of Monty Python and Fawlty Towers was outrageously funny.

Now he seems to enjoy causing outrage for its own sake. Plenty of elbow, but no funny bone.

To paraphrase the Pythons’ masterwork, Life Of Brian: He’s not the messiah, he’s a very grumpy old git who NEVER looks on the bright side of life.

None of which might matter too much — after all, we often have to make allowances for ageing friends and relatives.

The trouble is that the one sensible thing Cleese says is about Brexit. He supports Leave because: “I don’t want to be run by a bunch of European bureaucrats.”

To paraphrase the Pythons’ masterwork, Life Of Brian: He’s not the messiah, he’s a very grumpy old git who NEVER looks on the bright side of life.

Unfortunately, this makes Cleese the celebrity Brexiteer we could do without. He is in danger of acting as a Remoaner’s caricature of a Leave voter, all bile, bitterness, hate and humbug.

So, he hates London because it’s not English enough.

As evidence of this he has previously cited “a Californian friend” who “would walk down the King’s Road and say to me, ‘Well, where are all the English people?’”

What more proof do we need? Cleese insists his prejudices are “culturalist” rather than racist, of course.

London has been home to waves of immigrants ­dating back to the persecuted Huguenots and beyond, so Cleese’s idealised “English city” of the past was never really anything other than a melting pot. 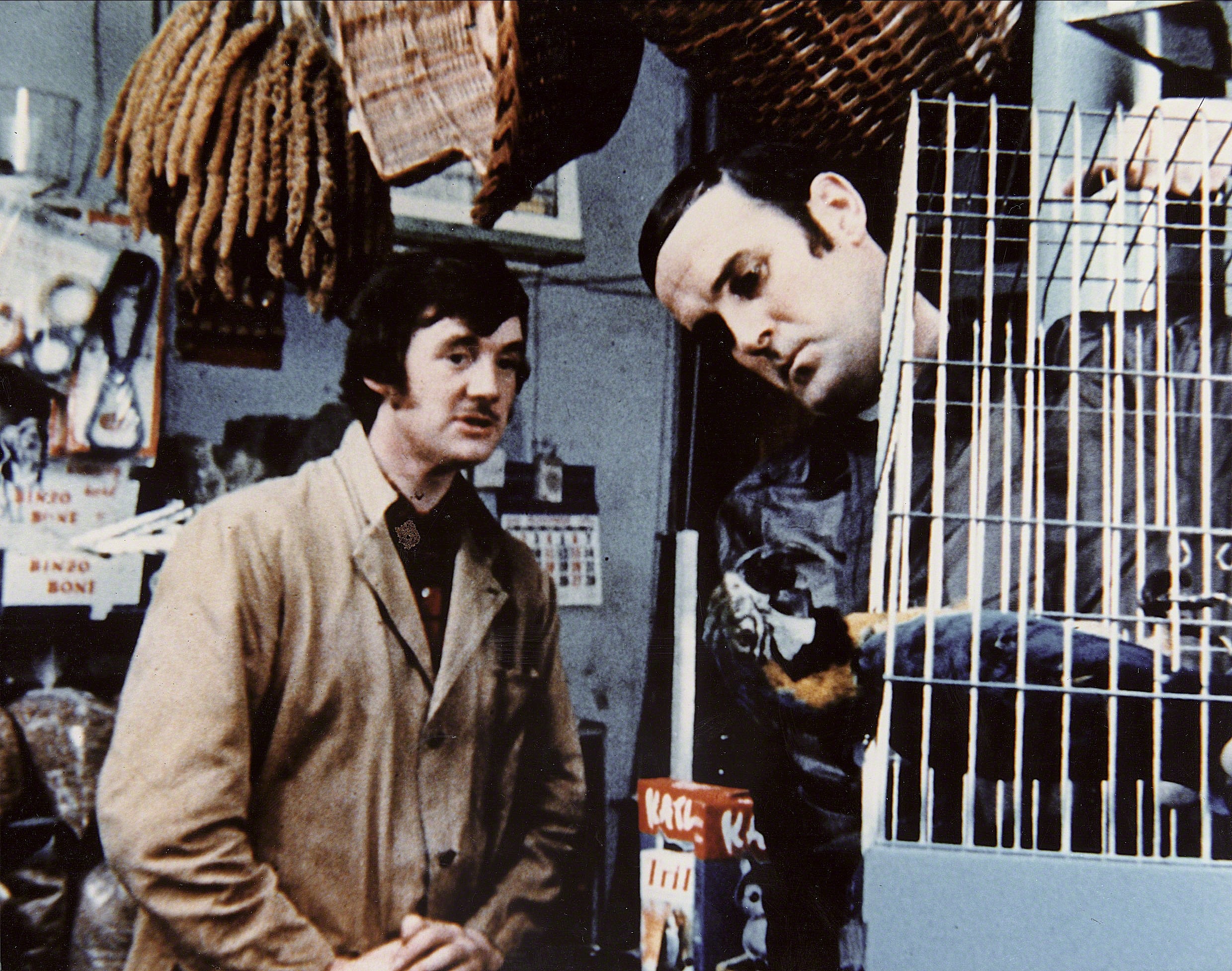 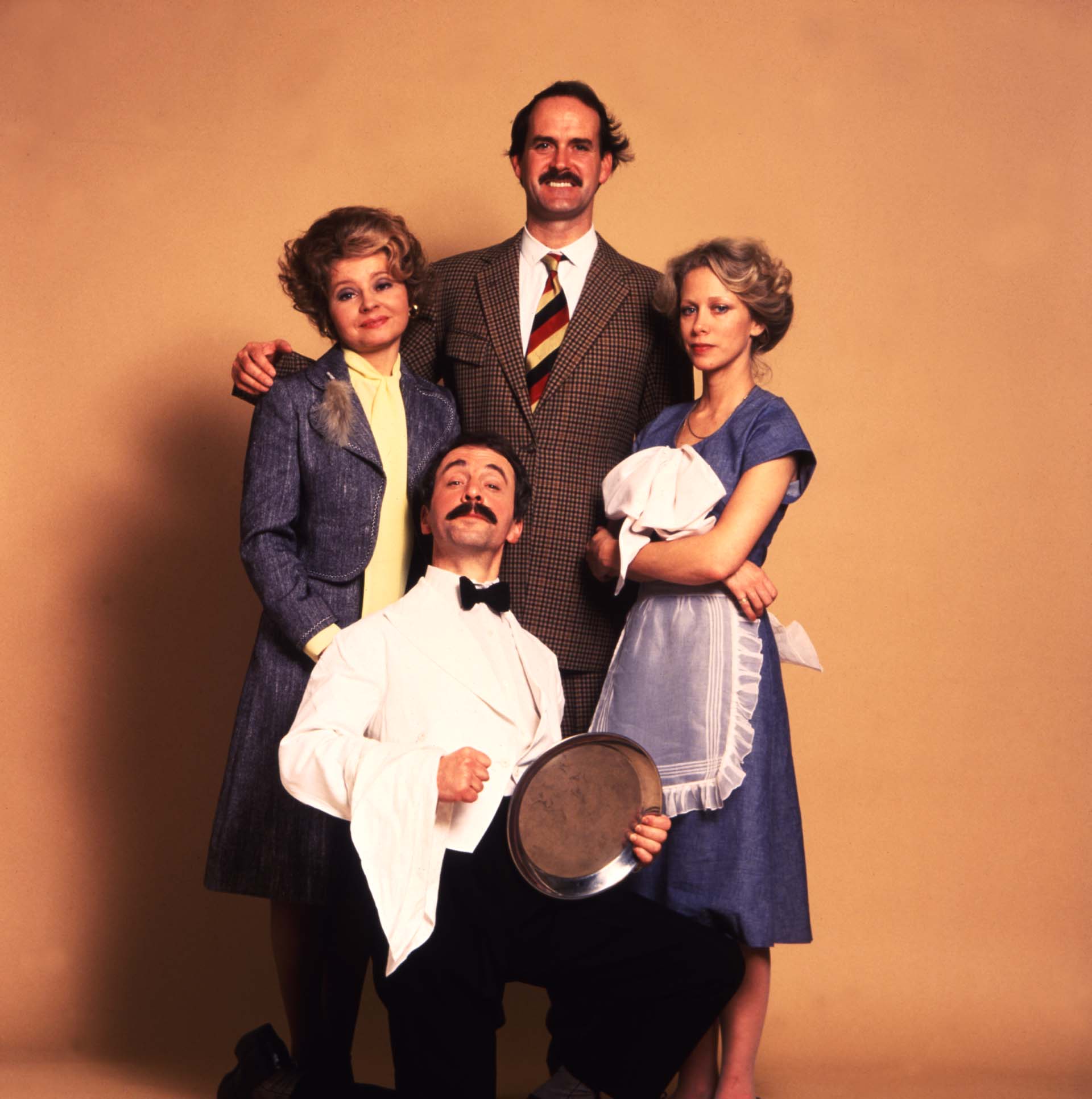 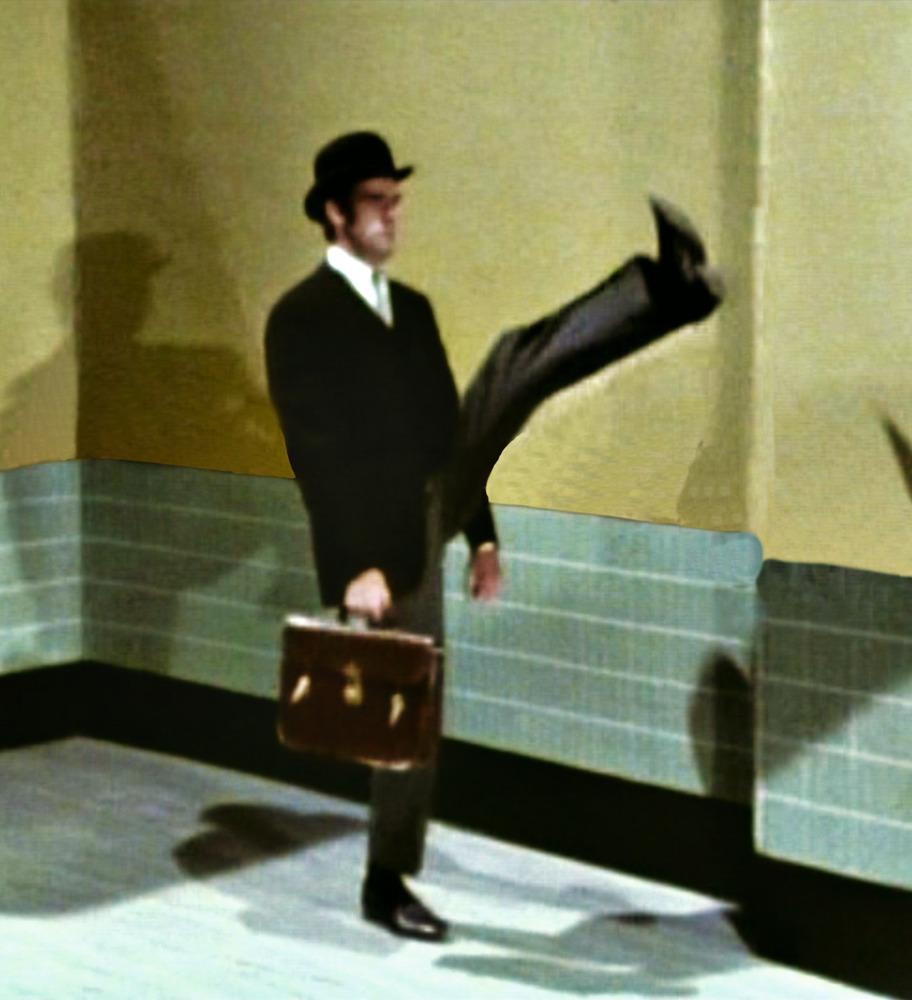 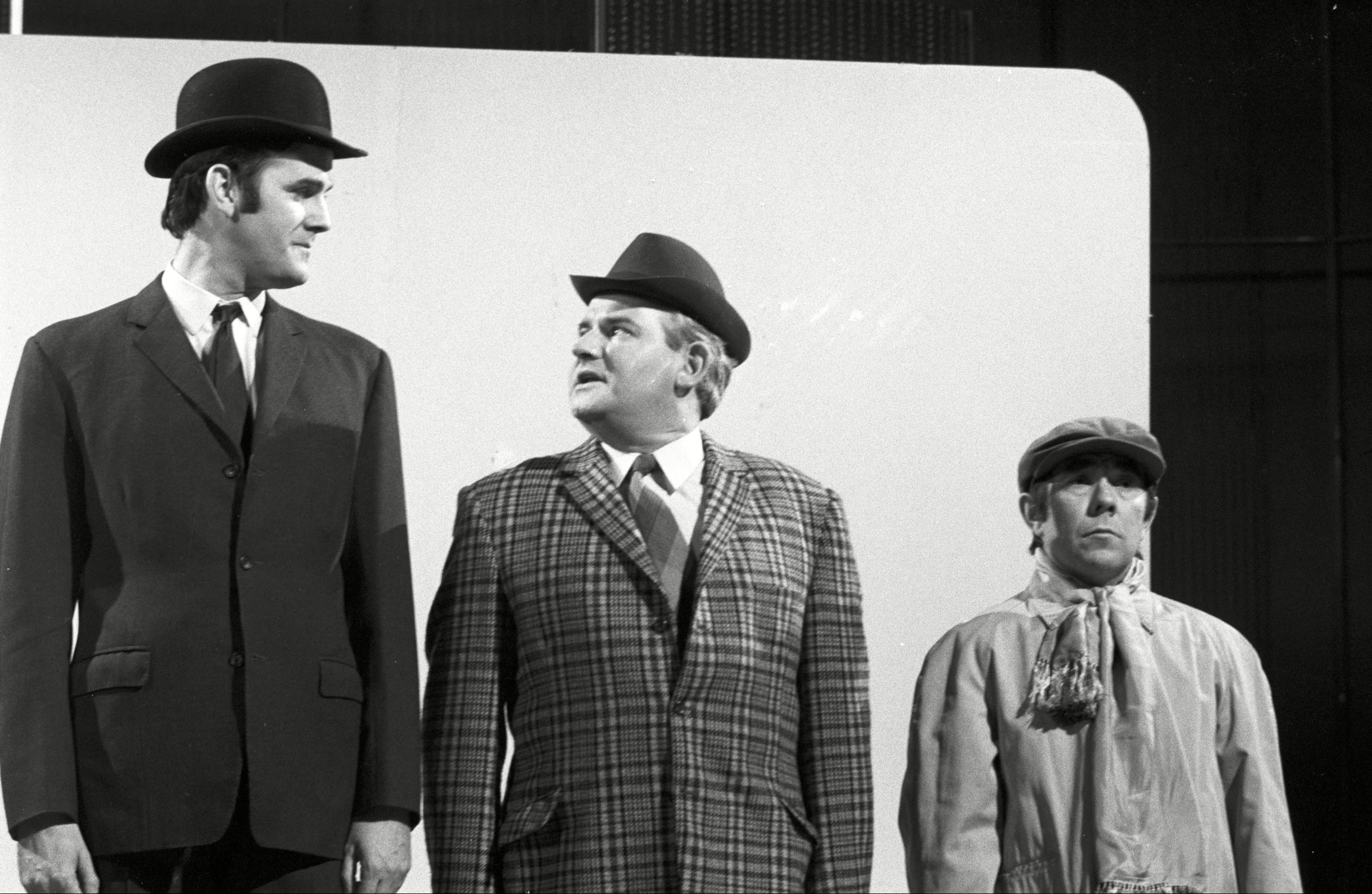 Today it is home to more than three million immigrants and more than 300 languages from 270 countries — an incredible smorgasbord that makes London the most multi- cultural capital city in the world.

In population terms, according to Emmanuel Macron no less, it is the sixth largest French city.

According to one estimate it is home to 50,000 Americans. That diversity is part of what makes it strong and vibrant: In academia, culture, cuisine, job creation and sport — everything good is here.

Cleese apparently hates Britain. “I am so disappointed with so much about this country.” And he really hates our Press freedom: “I have a particular beef with the newspapers.”

Scotch beef at that: “Why do we let half-educated tenement Scots run our English Press?”

He was bitterly “disappointed” by the failure of “so much of the country” to vote the way he told them to a few years back, on PR and stricter Press regulation.

“The right-wing Press lined up against it and people who did not understand it were convinced by their arguments.”

Forgive our ignorance, St John of Cleese, for we know not what we do.

After that, Cleese apparently decided he hated Britain and its ignorant masses so much he would move to the Caribbean island of Nevis.

This petty paradise seems to fit his fantasy of what Ye Olde England was like, boasting “excellent race relations, a very well-educated population, no sign of political correctness . . . a deep love of cricket, and complete lack of knife crime”.

Perhaps on that island, Cleese is even still funny.

He says he spent years in therapy because of his nasty, vengeful mother, yet appears to have inherited her attitude.

Children are “the cause of most of the misery in the world”. As for his own two daughters: “They cost a fortune, they worry themselves sick and then they grow up like their mothers.”

Even Cleese’s defence of free speech for comics comes over as less than liberating, complaining last year he could not call his fellow Python, the late Graham Chapman, a “poof” any more.

One thing he does agree with the Remainer establishment about is there is “too much” Press freedom.

Some of us who believe in free speech and the right to be offensive might almost be prepared to draw the line when it comes to Cleese.

Where is that giant cartoon Monty Python foot when we need it, to stomp the grouch into silence?