Brian Patchett had been helping his daughter Trish plan her wedding when he was struck by a car and killed last month.

He had just turned 80, was in good health and had been excited to walk her down the aisle. 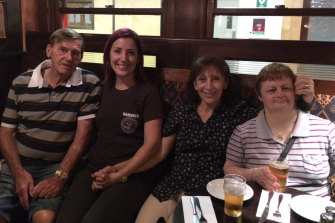 Brian Patchett (left) with his daughter Trish, wife Doris and her sister Rita.

Ms Patchett, who had been trying to get home to the Bellarine Peninsula from London for more than 18 months, was finally allowed to return to Australia and see her grieving mum, Doris. She flew into Tullamarine on July 1, two days after her father died.

However, as she sat in quarantine at the Novotel on Melbourne’s Collins Street, it became apparent her mother was struggling. Mourning her husband of 51 years and caring for her sister with Down syndrome, Doris told Trish she was having chest pains.

Ms Patchett and her fiance Chris applied for a quarantine exemption, but despite her mother, her aunt, Trish and Chris all being vaccinated, the Health Department rejected her application. 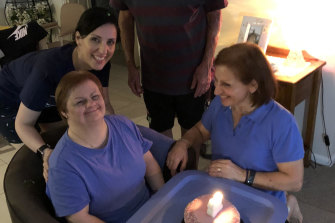 Trish Patchett with her aunt Rita and mother Doris.

Ms Patchett and Chris applied for a review of the decision on Tuesday. By Friday, the department had rejected their appeal.

“We’ve been trying to get back for a year and a half, and had four flights cancelled. I’ve been robbed of that last year and a half with my Dad,” she said.

“Until I’m out of here I won’t be able to grieve properly. It’s just frustrating – it feels like there’s no one listening to us. It’s like we’re bringing the plague back.”

As Australians continue to return home, how to properly balance the risk of them bringing COVID-19 back into the community against genuine compassionate grounds to have them skip it, is a question governments are struggling to answer easily.

Last week, the health departments of two states granted a travel exemption on compassionate grounds to Anna Coffey, whose father suffered a stroke in Melbourne and was being moved to palliative care.

Ms Coffey, a student in New York, was fully vaccinated.

“I’d hate to see anyone else go through this. You wouldn’t wish it on your worst enemy,” she said.

When contacted by The Age last Thursday night, she was on the phone with funeral homes and the coroner, planning her father’s burial from inside her room at the Novotel.

“Mum can’t make the funeral arrangements on her own,” Ms Patchett said. “Dad raised me to be strong. I won’t dishonour his memory by going to pieces.”

In a statement, the Health Department said entry into Victoria from overseas locations remained a critical public health risk and passengers returning to 14-day hotel quarantine remained the key control to prevent the spread of COVID-19.

“At this stage, consistent with the national approach, vaccination status is not a critical factor in determining exemption application outcomes,” a spokesman said.

“The Department of Health considers applications for exemption from quarantine in line with national standards agreed by national cabinet, based on advice from the Australian Health Protection Principal Committee.”

Ms Patchett turned 43 while in quarantine and the couple’s detention notice is set to expire at midnight on Thursday. Pending a negative test, they’ll be on the road to Bellarine early on Friday morning.

“Dad always said don’t get worried about things outside your control,” she said. “So I’m trying to take that on board.”