Moggies being held at the Cat Protection Society of Victoria have never had it so good and exhibit A is the new “cat condos” for its guests.

If cats tire of people-watching through the windows of their multi-level pens, they can duck into a windowless room and snooze, or stroll into an outdoor cat run. 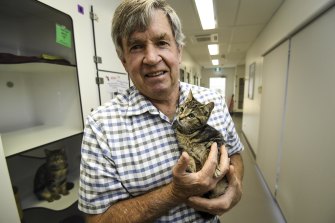 The society itself has new digs: the condos are part of a swish new $6 million shelter and veterinary clinic building at Greensborough in Melbourne’s north-east.

The society gets no government funding, however, donations including a $2 million bequest enabled it to replace an aged farm house and rudimentary outbuildings with the smart two-storey Elder Street facility.

Society chief executive Ian Crook said there was now capacity to re-home up to 2500 cats a year, compared with about 1400 previously. 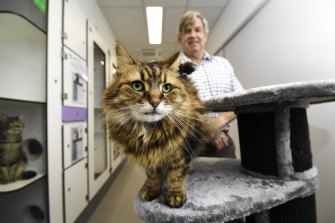 Cool for cats: Lexie the cat, who is resting before being put up for adoption, with Cat Protection Society CEO Ian Crook.Credit:Justin McManus

It can accommodate up to 300 animals at one time, compared with 200 previously, and now has fundraising and marketing staff.

There are “enrichment rooms” where volunteers can play with cats, and a courtyard where prospective owners can get to know cats up for adoption.

A ground-floor shop sells everything from cat food to poo scoopers to walking harnesses.

There are plans to sell cat-related art, books, figurines and cards. 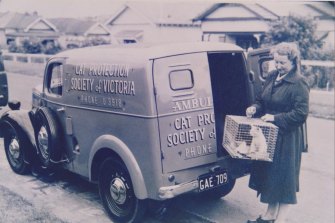 The society was founded in 1947 by cat lovers concerned about the number of feral, starving cats in Melbourne, and has been in Greensborough for more than 50 years.

In 1953, the society raised enough money with its 600 members to buy an ambulance for taking sick cats to and from hospital, and members patrolled city streets looking for stray cats.

Mr Crook said the society today accepted cats from council pounds, and from the public, all over the state.

Two weeks ago, volunteers drove kitten Hewy, a stray from Mildura, 550 kilometres to the society. His brother, Dewy, has already been adopted, and Hewy, a cute silver tabby, is a good candidate to find a home soon. 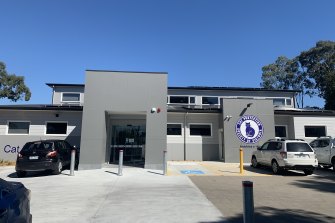 Older, long-haired tabby Lexie, 11, will go up for adoption after vet treatment and a rest in her ‘condo’ after her owner, in the Banyule area, died.

For the first time, the society has marketing and fundraising space, and rooms where school and community groups can learn about responsible cat care.

Mr Crook said staff would run more programs encouraging owners to have cats desexed, and to keep them inside, or in a cat run.

Mr Crook said it cost $2 million a year to run the society and public support was vital.

“It’s the generosity of people who are very passionate about animal welfare that keeps this organisation and others like ours going,” he said.

The new building will be launched with an open day from 11am to 3pm on April 24, with a ribbon cutting at 1.30pm.