Manchester: Meghan, the Duchess of Sussex, delivered her first speech in Britain since she and husband Prince Harry stepped down from their royal duties, telling a summit for young leaders that they were aiding “the positive and necessary” change in the world.

The speech came a week after publication of an interview with The Cut magazine in which she again voiced criticism of how she and Harry had been treated by the royal family, causing a stir in British newspapers. 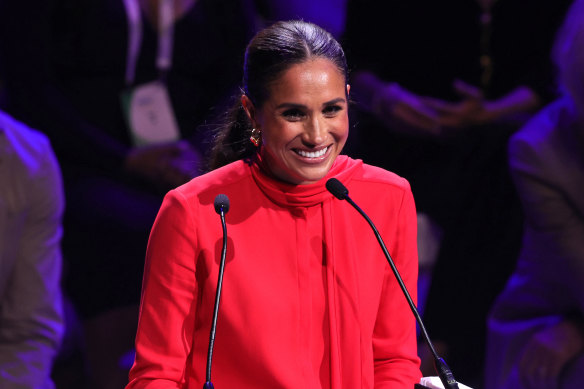 Meghan, Duchess of Sussex makes the keynote speech during the Opening Ceremony of the One Young World Summit 2022 in Manchester.Credit:Getty

“It is very nice to be back in the UK,” Meghan said in the keynote address to the One Young World summit in Manchester, northern England, which Harry, Queen Elizabeth’s grandson, also attended.

“You are the future, but I would like to add to that, that you are also the present. You are the ones driving the positive and necessary change needed across the globe now in this very moment.”

Meghan recounted her first experience at the summit in 2014 when she was invited to be a counsellor at One Young World.

“I’m thrilled that my husband is able to join me here this time,” she said, drawing cheers from the audience. “To meet again here on UK soil with him by my side makes it all feel full circle.”

Harry and Meghan quit royal duties more than two years ago, and only made their first public appearance in Britain since then in June as part of Elizabeth’s Platinum Jubilee celebrations.

They continue, however, to attract huge media attention, not least because of the strained relationship between Harry and his elder brother, Prince William, and father, Prince Charles, the heir to the throne.

British newspapers said there are no plans for Harry to see William during his trip, indicating that the siblings have not yet been able to patch up their differences. That is despite Harry and Meghan’s staying at their former home near Windsor Castle, only a stone’s throw from the cottage to which William and his family moved last month, papers said. 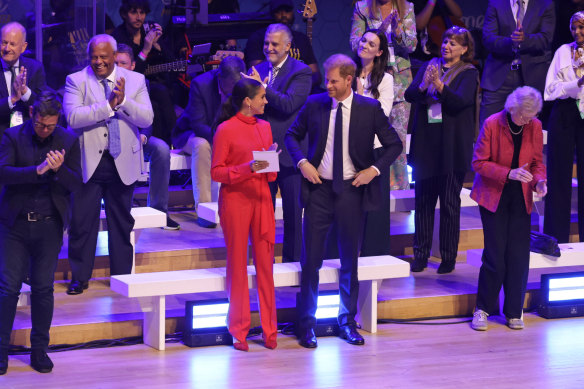 Back in the UK: Meghan and Prince Harry during the Opening Ceremony of the One Young World Summit.Credit:Getty

Harry has also been engaged in a legal spat with the British government over his security, and in July won permission to challenge a decision to deny him and his family police protection when they were in Britain, even if he paid for it himself.

Harry and Meghan have relied on a private security team since moving to California, where they live with their two young children.

After the event in Manchester, the couple are to attend an event in Germany on Tuesday to mark one year to go until the 2023 Invictus Games for injured veterans, and an awards ceremony for seriously ill children in London on Thursday.