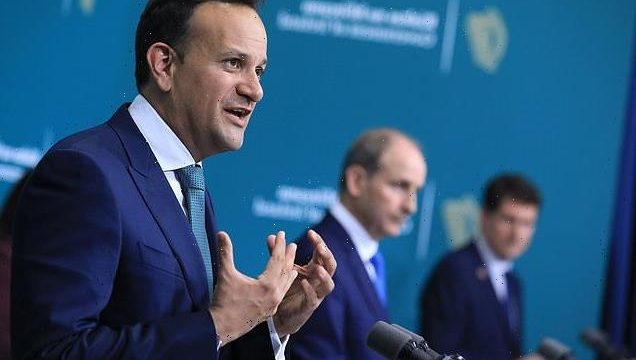 Leo Varadkar has said his Fine Gael party’s ‘mission’ should be to achieve a united Ireland in comments which risk further inflaming a post-Brexit row over the Northern Ireland Protocol.

The Irish deputy prime minister said his party ‘should be proud to say that unification is something we aspire to’.

He said unification ‘must not be the annexation of Northern Ireland’ as he claimed his ‘inclusive’ vision for the island is very different to the ‘crude vision espoused by Sinn Fein’.

Mr Varadkar made the remarks amid a rumbling dispute between the EU and the UK over the implementation of the protocol.

The timing of the comments was immediately slammed by unionists in Northern Ireland as ‘mad stuff’. 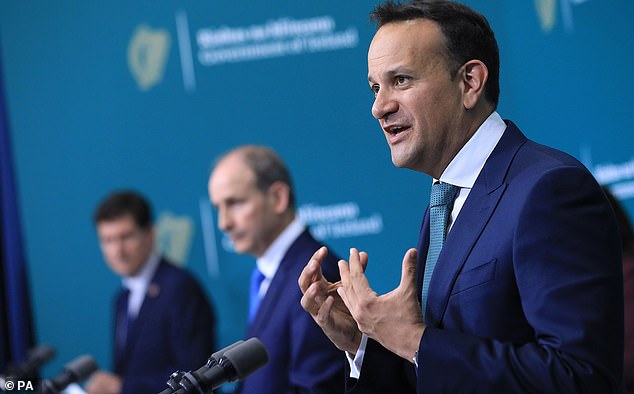 Mr Varadkar told his party’s conference last night that it must increase its engagement with communities in Northern Ireland because the ‘tectonic plates were shifting’ in the region.

He said: ‘It means the unification of the people of our island as well as territory of Ireland and it is a legitimate political aspiration.’

He added: ‘We should be proud to say that unification is something we aspire to. It should be part of our mission as a party to work towards it.’

He called for a Fine Gael branch to be set up in Northern Ireland to increase engagement with communities there.

‘Not with a view to contesting elections, but with a view to recruiting members and building networks with like-minded people including those in other parties,’ he added.

‘We need to reach out to all sides. And we need a presence on the ground to do so.’

He called for Fine Gael to develop its own vision of what reunification will look like, one that can appeal to middle-ground voters.

He said: ‘We know the crude vision espoused by Sinn Fein, it’s not an inclusive one – a cold form of republicanism, socialist, narrow nationalism, protectionist, anti-British, euro-critical, ourselves alone, 50 per cent plus one and nobody else is needed. That is not a 21st-century vision.

‘Our vision should be different. It should be one that has the best chance of carrying the greatest number of people with us, North and South.

‘It should appeal in particular to that middle ground I spoke about earlier, to gain the support of people who identify as both British and Irish. So, unification must not be the annexation of Northern Ireland.

‘It means something more, a new state designed together, a new constitution and one that reflects the diversity of a bi-national or multi-national state in which almost a million people are British.’

The comments came as the EU and the UK continue talks to try to improve the implementation of post-Brexit trade checks in Northern Ireland.

The protocol agreed as part of the Brexit divorce deal requires checks on goods travelling from GB to Northern Ireland to be carried out at ports in order to avoid the return of a land border with the Republic. 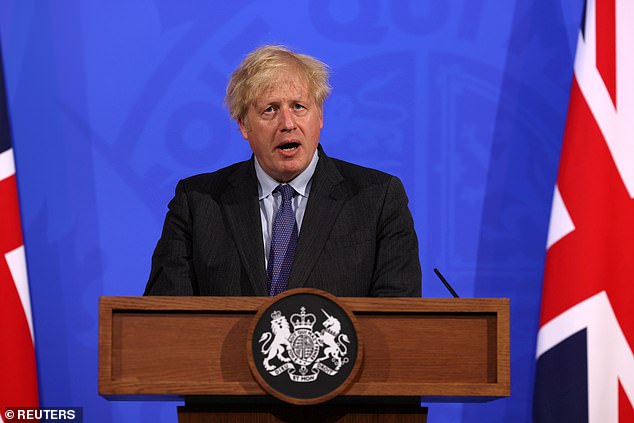 The EU and the UK continue to try to agree solutions to problems caused by post-Brexit trade checks in Northern Ireland. Boris Johnson has threatened to suspend elements of the protocol if solutions cannot be agreed

But the protocol has caused disruption to trade and inflamed community tensions, with unionists demanding the rules be scrapped, arguing they create a barrier between Northern Ireland and the rest of the UK.

Boris Johnson has threatened to tear up elements of the protocol if the two sides cannot agree solutions.

The comments made by Mr Varadkar were quickly condemned by members of the DUP.

She tweeted: ‘Well, this is useful (not) at a time of huge concern and anger on the ground across all shades of Unionism about the Protocol, and while Unionism is trying hard to ensure a peaceful summer despite significant unrest. Mad stuff.’