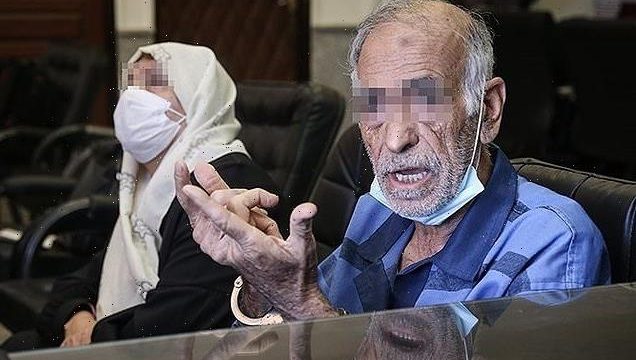 An Iranian couple accused of sedating, stabbing and then dismembering the body of their son in an honour killing have also confessed to murdering their daughter and son-in-law in the same way.

Akbar and Iran Khorramdin, 81 and 74, were arrested three weeks ago in Tehran on suspicion of murdering their film-maker son Babak after his dismembered body was found in a dumpster near their house.

While being questioned by police, the pair admitted to having killed him because he was unmarried before confessing to killing son-in-law Faramarz and daughter Arezou years earlier for their ‘immoral’ behaviour, Iranian media reports.

‘I don’t have a guilty conscience for any [of the killings]. Those I killed were highly morally corrupt,’ the father said during an initial court appearance. 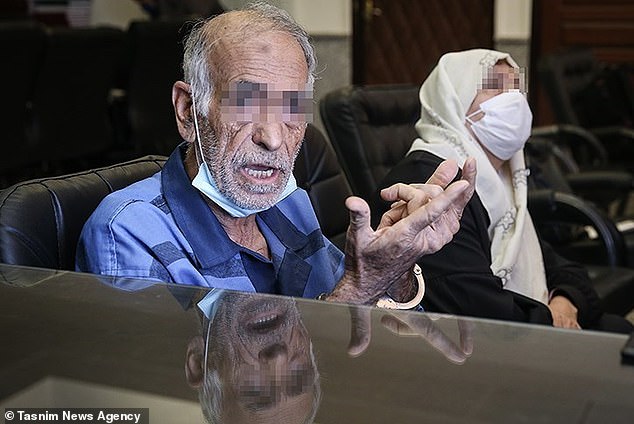 Akbar and Iran Khorramdin, 81 and 74, have confessed to killing their son, daughter, and son-in-law in a series of honour killings spanning 10 years (faces muzzed by Iranian media)

Iran, Babak’s mother, added: ‘We both [planned the murders]. My husband said it and I said, “OK.” I’m not sad at all. I suffered a lot because of them.’

Police are still investigating the crimes, according to Iranian news site Tasnim.

The pair face up to 10 years in jail for killing their children under Iran’s strict interpretation of Islamic law that grants lighter penalties for parents who murder their children.

However, they could face life in prison if convicted of murdering their son-in-law.

The grisly story first came to light on May 16 when garbage workers in Tehran discovered a dismembered body in a dumpster near the Ekbatan neighbourhood.

Police were called, fingerprinted the body, and identified the victim as Babak Khorramdin, a filmmaker who studied and worked in London starting in 2010 before returning to Iran to teach.

Officers went to the parents’ house and arrested them after discovering evidence of a murder inside.

The pair initially denied the killing, but later confessed – saying they had put sedatives in Babak’s food and then stabbed him while he was semi-conscious.

They then took Babak’s body to a bathroom where they dismembered it, put the body parts in a suitcase, and dumped it in the trash, according to Iranian reports.

Police say the pair then confessed to killing daughter Arezou three years ago and to killing her husband Faramarz 10 years ago, using similar methods.

The couple claimed that both Faramarz and Arezou had gone missing, suggesting they had run away to live abroad, and police never investigated the disappearances.

Officers are now investigating the pair, and are looking into whether any other family members have gone missing in suspicious circumstances.

Akbar and Iran have two other children – Afshin and Azar – both of whom are alive.

Police said last week that no other crimes have so-far been uncovered, but investigations are still ongoing.

Babak graduated from the Faculty of Fine Arts of the University of Tehran in 2009 with a master’s degree in cinema.

The following year, he moved to London to further his study of film, before returning to Iran to teach film to students.

He made a number of short films while in London including Crevice and Oath to Yashar, which focused on his experience moving country and being away from his family.

Middle East Analyst and Editor at Iran International TV, Jason Brodsky said: ‘I think the horrific death of Babak Khorramdin is only the latest example of a long pattern of domestic violence that we have seen in Iran.

‘It follows the tragic death of Ali Fazeli Monfared, who was killed by family members after they found out he was gay.

‘That is not to mention the case last year of Romina Ashfrafi, a 14-year-old girl who was beheaded by her father in an honour killing.’

He added: ‘Despite a child protection law being passed in 2020 in Iran, honour killings and domestic violence continue more broadly, and this is an area the international community needs to address with Iran.’

There has been a rise in domestic violence and family homicides during the pandemic while people spend time with relatives at home.