NSW Police detectives are hopeful footage of multiple cars visiting an apartment block in Sydney’s north could be key to solving the murder of Sydney crime figure Bilal Hamze.

Police released over four minutes of footage on Thursday morning which shows “several vehicles of interest” driving in and out of an apartment complex car park on Walker Street in North Sydney between July 15 and August 14 last year.

Police believe the people inside the vehicles intended to murder Ibrahem and are related to a botched attempt on his life in August 2021. Detectives believe the same vehicles also have connections to Bilal’s murder in June 2021.

“On each occasion, we believe the people inside these cars intended to murder their target, who was residing in that building at the time,” he said.

“The Honda and Ford were fraudulently registered, and we ask anyone who [may have] received information from the [Roads and Maritime Services] that any vehicle they do not own has been registered in their name, to report it to police. 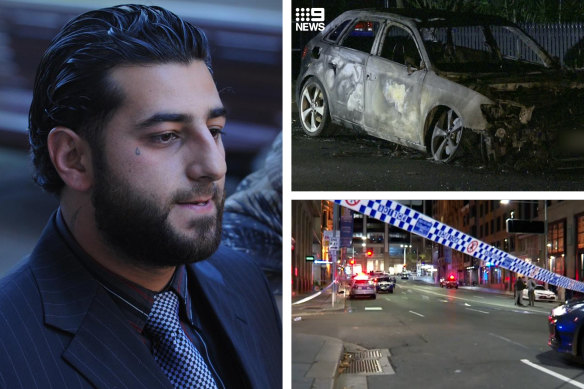 Bilal Hamze and, inset, the crime scene in Sydney’s CBD and a burnt-out car that was found in Northwood, in Sydney’s lower north shore.Credit:Braden Fastier/Nine

“This is a shift in the [method of operating] used by these types of criminal syndicates, and as the Ford Territory has yet to be located, I would urge anyone with relevant information to come forward.”

Police believe both the murder and attempted murder of the two brothers are part of the long-running feud between the Hamzy and Alameddine crime families.

Ibrahem Hamze was saved from the alleged attempt on his life when traffic police attempted to stop a stolen Mercedes on North Sydney’s Walker Street in August 2021.

The driver refused to stop, but sustained a flat tyre as it fled.

The car was later abandoned in nearby Cammeray, where two allegedly armed men wearing dark clothing escaped by carjacking a Toyota Camry by threatening its 76-year-old driver.

Detectives have since charged three men – all believed to have connections with the Alameddine family – over their alleged roles in that incident.

Police are yet to charge anyone with the murder of Bilal.

The 34-year-old died in a drive-by shooting while leaving the Kid Kyoto restaurant on Bridge Street in Sydney’s CBD on June 17, 2021.

He was treated at the scene before being taken to St Vincent’s Hospital, where he later died.