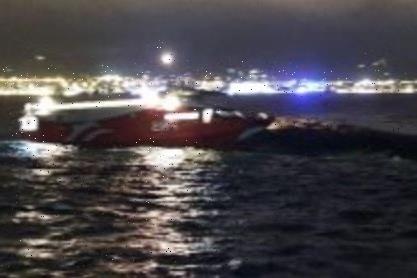 A FERRY has run aground in Ibiza leaving 15 people injured and a ten-year-old child in a serious condition.

The FRS ferry was travelling between the tourist hotspot and the neighbouring island of Formentera when the horror unfolded.

It ran aground on an islet near the port of Ibiza called es Malvins while carrying 35 passengers and 12 crew.

The coastguard, a helicopter and other boats joined the rescue attempt as paramedics rushed to the scene last night.

Around 15 people have been injured with a child, believed to be aged around ten, "seriously hurt".

The nature of their injuries and their nationalities have not yet been revealed.

FRS Ferry said: “The San Gwann Ferry operated by FRS which covers the route Ibiza-Formentera suffered an accident on Saturday after running aground on the islet of Es Malvins following its departure from Ibiza at 9.30pm.

“FRS has activated its security and emergency protocols and immediately informed the authorities of the incident.

“FRS would like to thank Spanish Coastguards who were involved in the rescue operation and the evacuation of the vessel, as well as the other institutions who have participated in the evacuation.”

Ibiza is currently on the government's amber list after a spike in cases.

Brits can still visit the tourist-friendly island and will not have to quarantine when they arrive back home if they are double jabbed.

“The crew and the passengers are being evacuated and the injured are receiving the necessary medical attention.”