Parents will hold a crisis meeting in Richmond on Wednesday night to raise concerns over the proximity of a supervised injecting centre to a local primary school.

A series of events in recent weeks have prompted the meeting, including the discovery of a man’s body outside the school and the arrest of another man who trespassed on school grounds allegedly armed with a knife. 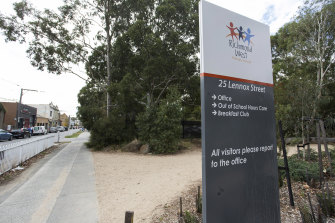 Residents are calling on the state government to move the injecting centre from its Lennox Street location because it is too close to the Richmond West Primary School.

The state government extended its two-year trial of the injecting centre last year to run for another three years.

Kasey, a parent of two daughters at the school, told radio station 3AW that the past couple of weeks had been difficult for local residents.

“There’s just been a few incidents that all seem like they’re piling up on top of each other,” she said.

“I saw the sheet over the body, it was devastating to think it [the facility] is not really doing its job anyway.”

Kasey, who wants the centre moved to an industrial area closer to North Richmond railway station, said the anti-social behaviour of drug users was having an effect on children.

“Most people do a good job of sheltering their kids, we’re inner-city parents,” she said.

“I think they definitely know more than they should … we worry there will be a really bad one [incident] they will see.”

Kasey’s nine-year-old daughter, Tilley, told 3AW that she wanted to move away from the area.

“I’m probably going to move somewhere else where there’s not these sorts of people,” she said.

She said that she wasn’t always sure if people on the street were “nice” or “bad”.

“It’s kind of scary I don’t really know what’s going on at all times, I ask my mum and she says just to stay away and be safe,” she said.

He allegedly approached a ground-level office door on the east side of the primary school and tried to enter. A teacher told him the door was locked and that he should check in at reception.

The man then began walking around school grounds and was approached by a second teacher, who asked him to leave and escorted him to the front gate. He refused and returned to the school grounds, prompting the teacher to call the police, according to court documents.

Police charged him with trespassing, resisting police, possession of a controlled weapon and being drunk in a public place.

In an unrelated incident, a man’s body was discovered a day later outside the school grounds. Police said the death was not being treated as suspicious.

Jonathan Lowe, a member of a residents’ injecting room action group calling for the centre to be moved, said locals felt like they weren’t being heard by the state government.

The meeting will be held at All Nations Hotel, a pub across the road from the school, on Wednesday night from 7pm.

“We were told before the injecting room happened that they would clean up the streets, it would improve the amenity.

Victoria Police Chief Commissioner Shane Patton said there had been an increase in drug offences around the centre.

“We continue to send tonnes of our resources in there,” he said.

“It’s confronting when you see those images portrayed last week.”