The Hubble Space Telescope completes a full lap of the Earth in a little over half an hour. It has been quietly and almost faultlessly doing this for more than 30 years, all the while sending images back to the ground: of distant galaxies, of stars dying and being born.

Last month, for reasons space agency NASA still does not understand, Hubble suddenly clicked off. The camera shutter snapped shut and the system flicked into “safe-mode”. The 13.2-metre craft, capable of capturing data from more than 13 billion light years away, became a hunk of metal in orbit. 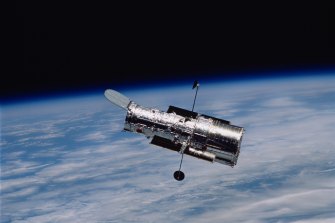 The Hubble Space Telescope in orbit above Earth.Credit:Courtesy of NASA

On Thursday, after weeks of rigorous testing, a team of engineers at NASA started a revival process, attempting to bring the 31-year-old telescope back to life – from 550 kilometres below. Over the weekend, they fixed it.

Glen Nagle, education and outreach manager at the Canberra Deep Space Communication Complex, said Hubble did exactly what it should have when faced with a glitch – it shut down, displayed a “blue screen of death” and called home.

“Was it a complete hardware failure? Was it a software issue … Was it just a matter of switching it off and switching it on again?” he said. 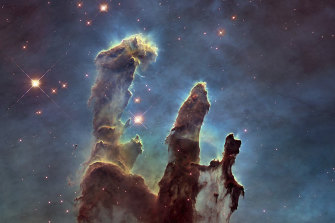 Among Hubble’s most famous pictures is the Pillars of Creation in the Eagle Nebula, originally captured in 1993 and retaken in 2014 with better cameras.Credit:Universe: Exploring the Astronomical World published by Phaidon.

It wasn’t the first time Hubble had shut down. Since its launch in April 1990, the telescope has been visited five times by astronaut crews to fix instrument failures and degraded mechanical parts.

But this time, it was different.

This error occurred in the payload computer – the main control system for Hubble’s scientific instruments. NASA has identified that it could have been caused by a glitch in the power control unit. If the voltage is too low or too high, the unit will tell the computer to shut down.

The Space Shuttle program closed in 2011, meaning manned missions to repair the craft were no longer an option. Every repair must be done from Earth. 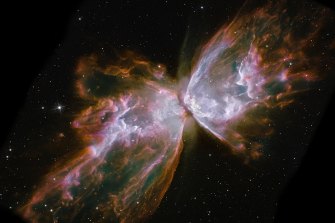 A Hubble image of the planetary nebula popularly called the Bug Nebula or the Butterfly Nebula.Credit:Space Telescope Science Institute Office of Public Outreach

Fortunately, Hubble has a back-up system, which was installed as part of a restoration during the final manned mission in 2009. NASA began switching to the back-up system last week.

Dr Brad Tucker, an astrophysicist at the Australian National University, said Hubble was one of the most oversubscribed telescopes in operation, with more than 1000 proposals every year.

“The Hubble is just one of those instruments that everyone in the field uses,” he said. “It is such a premier, critical instrument across lots of different types of astronomy.”

With Hubble in its twilight years, the James Webb Space Telescope, due for launch in November, is expected to be its successor.

“All the lessons we’ve learnt from the Hubble Space Telescope, to improve the way that we observe the universe, will go into this craft,” Mr Nagle said.

“Its mirror system is many times larger than Hubble’s – it can collect more light from even more distant objects out there in the far reaches of the universe, at far higher resolutions than we’ve ever been able to do before.” 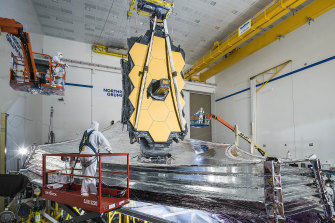 James Webb Space Telescope is expected to be Hubble’s successorCredit:NASA

Unlike Hubble, which is in orbit around Earth, the Webb telescope will be orbiting in space between the Earth, moon and sun.

Dr Tucker said it was unlikely the latest glitch would spell the end of Hubble, but scientists are aware it has an expiry date.

“Not even computers and cars and phones last for 10 years without fixing … even if it was perfect, it will still run out of fuel at some point.

“I think the question is, just when is that point?”

Liam Mannix’s Examine newsletter explains and analyses science with a rigorous focus on the evidence. Sign up to get it each week.