Huawei decided to pull the pin on the NRL in June.

In the end, sponsoring last year's premiership runner up, the Canberra Raiders, charity work, and a $19 million training facility had not made a lick of difference to the company's public image in Australia.

Sponsorships are fundamentally soft-power exercises. Companies don't undertake them out of an overwhelming sense of duty to their communities or a particular sporting club. 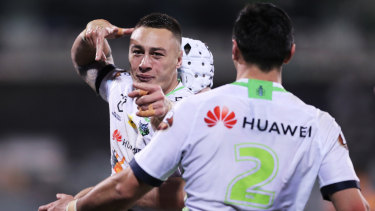 Canberra fullback Charnze Nicoll-Klokstad celebrates scoring a try during round 14 of the NRL. Credit:Getty Images

Huawei's support, like all other sports deals, was about bolstering the company's public image.

In Huawei's case it was also a play to politicians to convince them it was a good corporate citizen.

But after seven years of its brand being splashed around Canberra, Huawei could only conclude it had failed.

The national security concerns of allowing a state-linked company to build Australia's most significant internet network had become overwhelming for policymakers. The risk of Huawei being asked by the Chinese Communist Party to spy on the government or its citizens was too great.

The 5G standard set after the Turnbull government banned it from the next generation network in 2018, had fed down to 4G by 2020.

Its revenue was plummeting as Optus and Vodafone began ripping out the Huawei 4G network this year to be replaced by anything but Huawei for 5G. In Australia, 80 per cent of the company's revenue came from its carrier network division, which is responsible for installing and maintaining equipment across mobile networks.

Even as phone and tablet sales pushed its revenues in China past $50 billion and profits climbed by 9.2 per cent in the first half of 2020, the writing in Australia was on the wall. 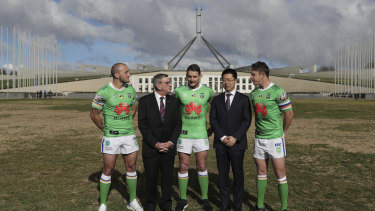 Last week, Treasurer Josh Frydenberg rejected Mengniu Dairy’s $600 million bid for Lion Drinks and Dairy on vaguely defined national interest grounds. It's hard to imagine another Chinese conglomerate will bother to tango with the the Foreign Investment Review Board.

Whatever the rest of the NRL season holds for the Canberra Raiders, it won't be another Chinese-owned company splashed across their jerseys in 2021.

More significantly, Huawei's decision to pull the pin on the Raiders is the end of a process in Australia that will now be mirrored around the world.

Australia banned the telco two years in front of anyone else. Just like Australia, its foothold in the US and Europe is more in network infrastructure than consumer goods. The dye is cast.