WITH fury raging as parts of the North East were plunged into lockdown today, stats suggest neighbouring areas might soon follow suit.

Earlier this week, Health Secretary Matt Hancock announced tougher restrictions on seven of the 12 local authorities in the North East. 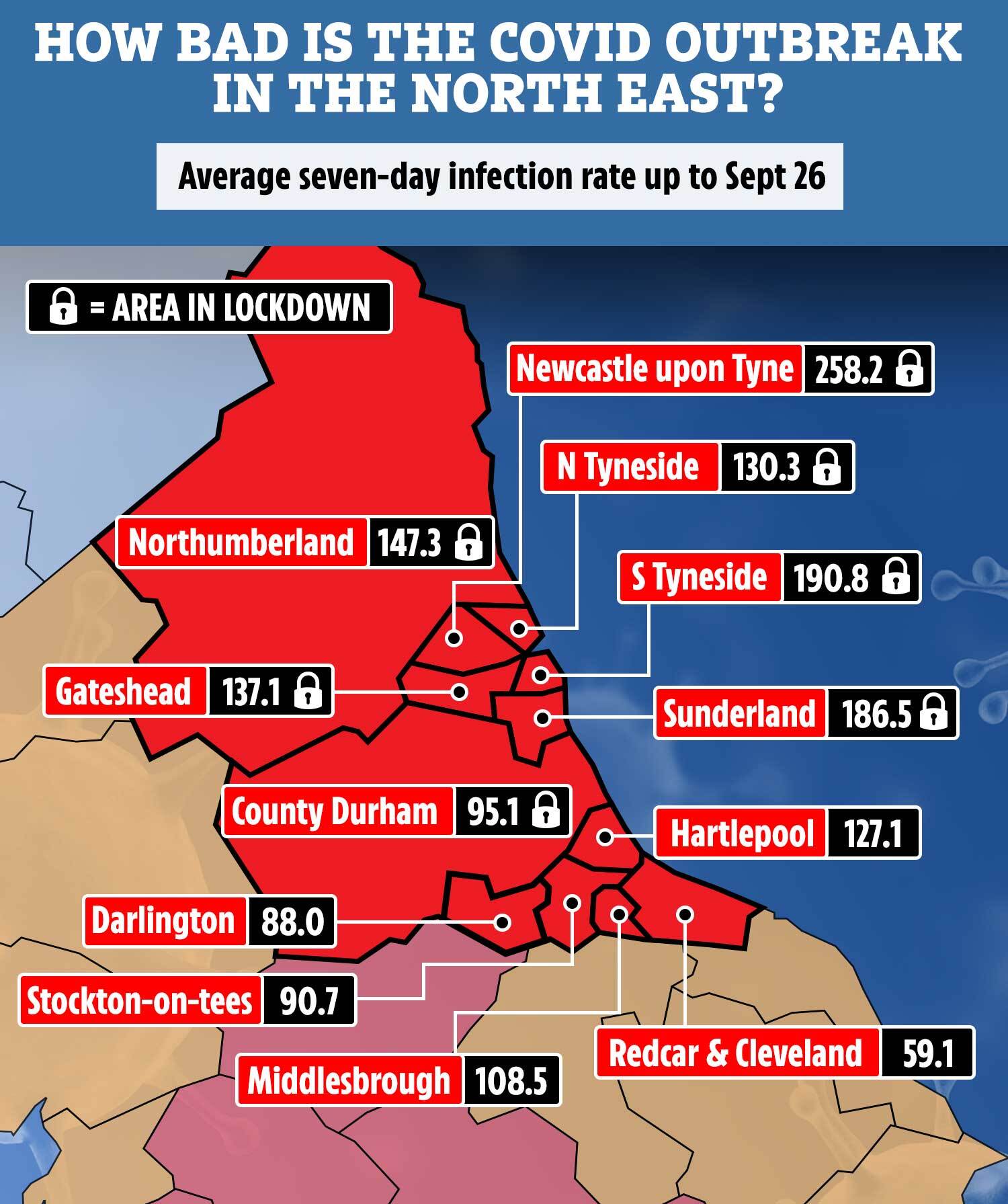 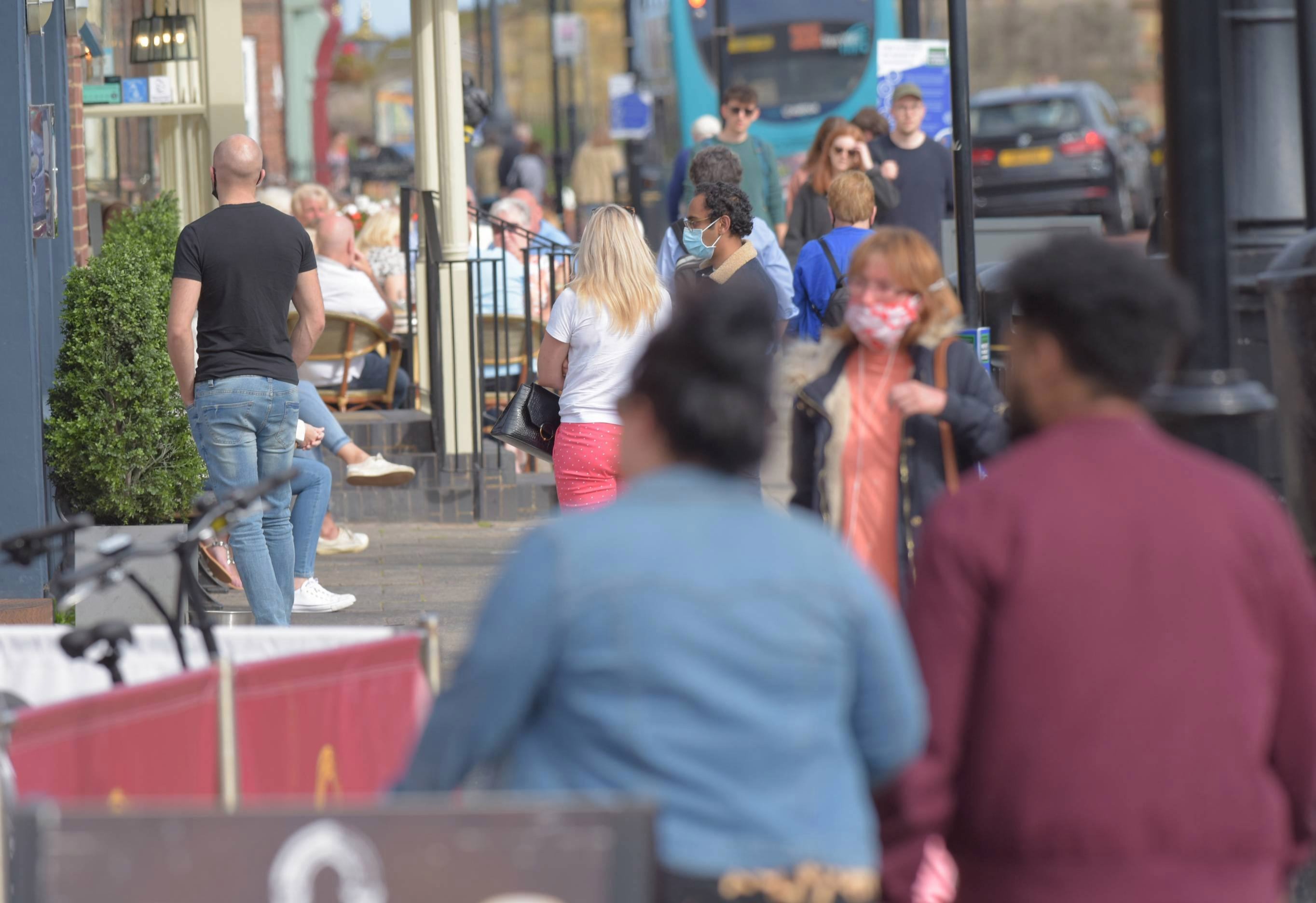 As of midnight today people living in Northumberland, Newcastle, Gateshead, North Tyneside, South Tyneside, Durham and Sunderland face £200 fines for socialising indoors with loved ones who live outside of their household.

The guidelines also advise that people avoid seeing people from other households outside in parks and pub gardens as well – though that is not enshrined in law.

Meanwhile those living in Redcar and Cleveland, Darlington, Stockton-on-Tees, Hartlepool and Middlesbrough can carry on as "normal".

The new restrictions have sparked anger among local councils as businesses fight their way out of the dire situation they face in the wake of the national lockdown.

Newcastle City Council’s leader, a member of the Labour Party, Nick Forbes said while they want to work “constructively” with the government it can be difficult to do so when they are “making it up as they go along”.

“We have demanded clarity on the new restrictions, testing and support for those businesses most affected.”

Meanwhile police and crime commissioner for Northumberland, Kim McGuinness said the measures were an "utter disgrace".

Some have questioned the thinking behind the lockdown as PHE data shows that hospitalisations for Covid-19 in the region are around 20 per cent of those seen at the height of the pandemic, and deaths remain stable at an average of four a day.

PHE data published last week identified Hartlepool as the second highest area on it's places of "enhanced support and concern" list – yet it is not subject to the new restrictions.

Also on that 'watch'list are Middlesborough, Stockton-on-Tees, Darlington and Redcar and Cleveland – suggesting they too could be at risk of an impending lockdown.

The latest data for the seven local authorities in the North East in lockdown shows:

Meanwhile, the stats for the five areas not yet facing tougher measures suggests restrictions may not be far off. 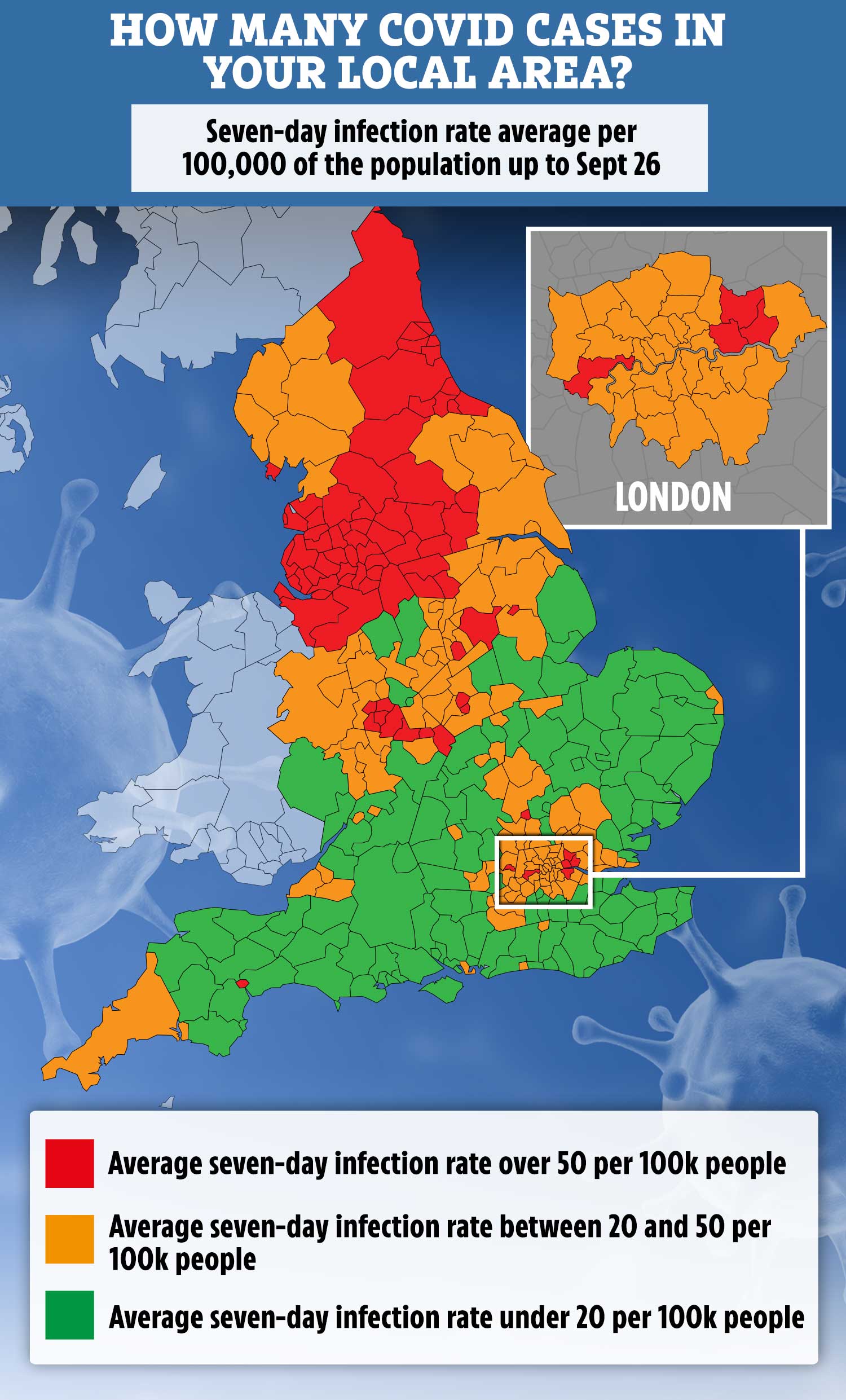 Looking specifically at hospital admissions in the North East, PHE reports reveal there are 57 patients on ventilation in hospitals across the region battling Covid.

There are 426 patients in hospital.

PHE figures show that in total 18,107 people have been admitted to hospital in the North East with coronavirus since the start of the pandemic – that's around 72 daily admissions. 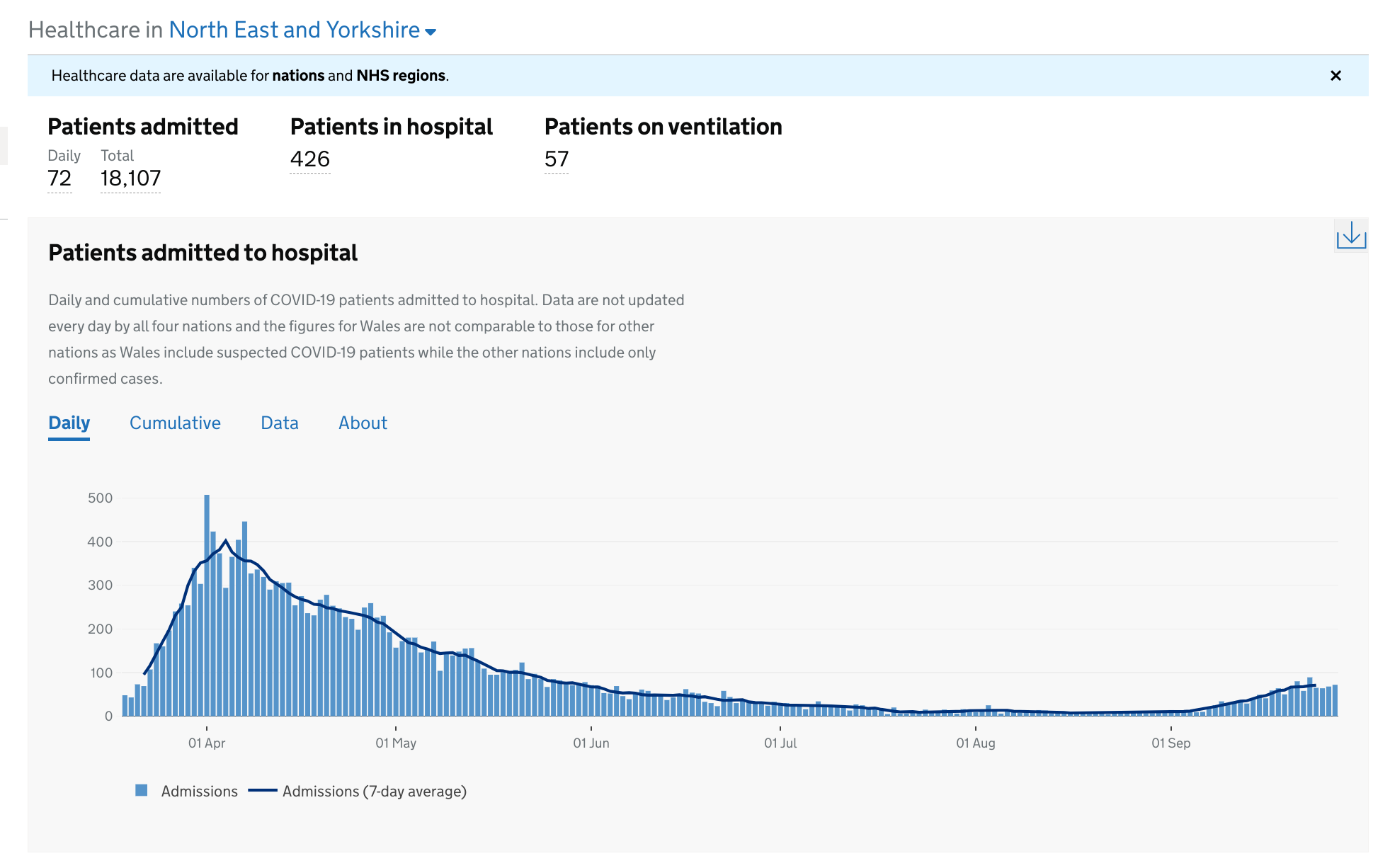 The figures are not dissimilar to London – where no areas of the capital currently face local lockdowns.

At present PHE figures show that there are 50 patients on ventilation and 263 in hospitals across London's boroughs.

In the North West there are 82 patients on ventilation and 612 people in hospital. 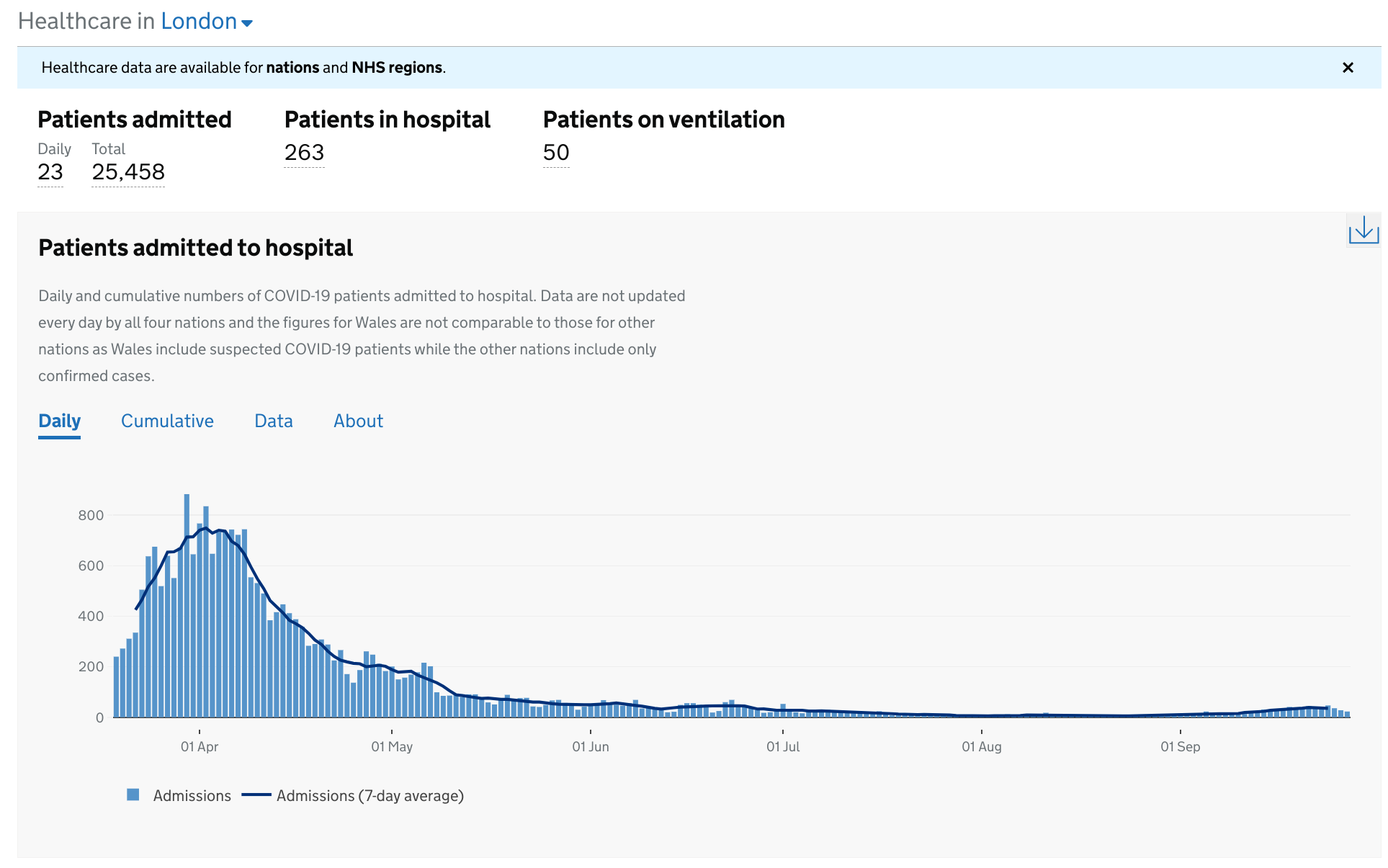 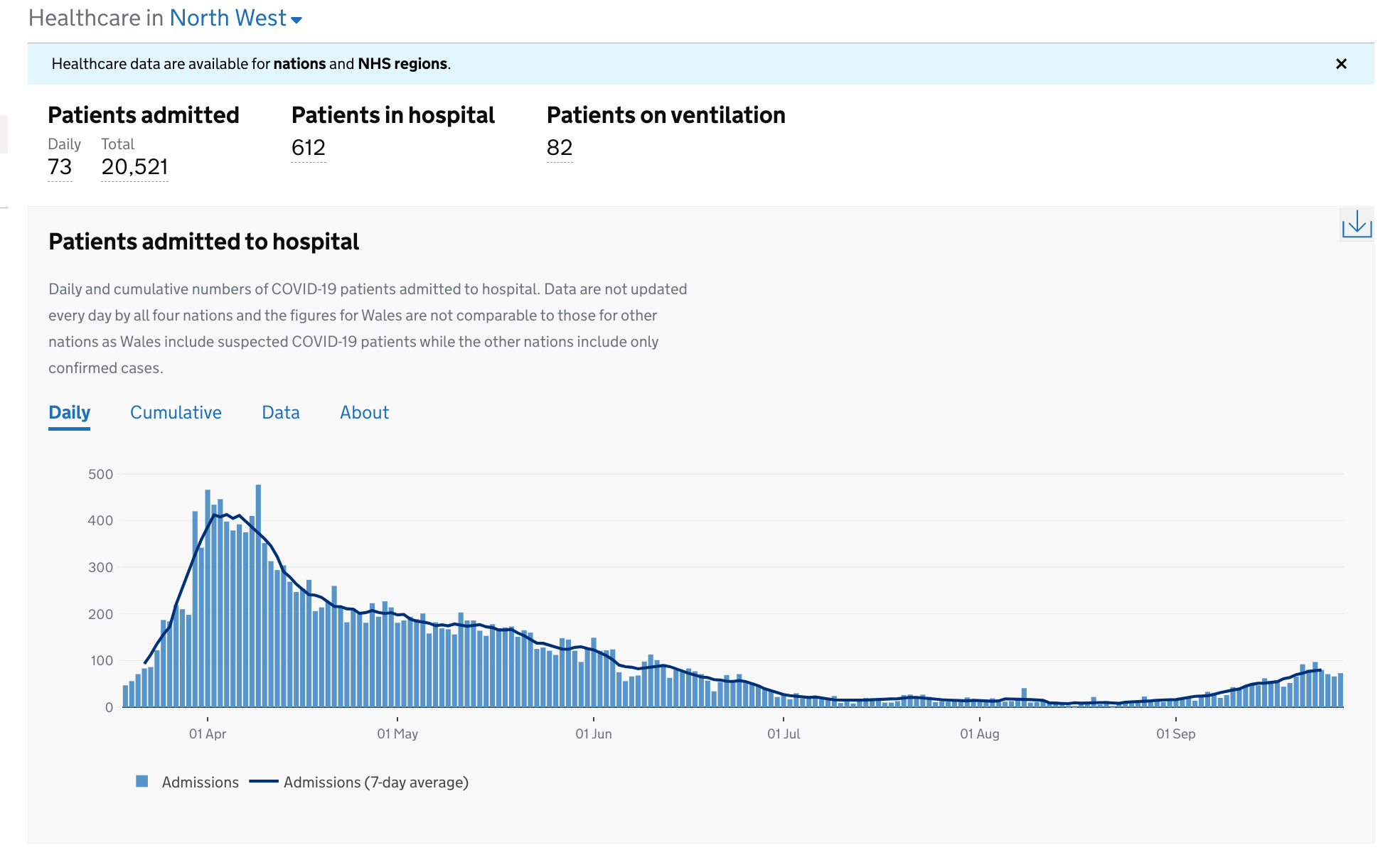 How does the North East compare to other regions in England?

The North East has recorded 940 cases per 100,000 people since the start of the pandemic – which equates to around 25,097 cases, according to data from Public Health England.

The data shows that when compared with other regions the North East has one of the lowest case loads in England, despite being in lockdown. 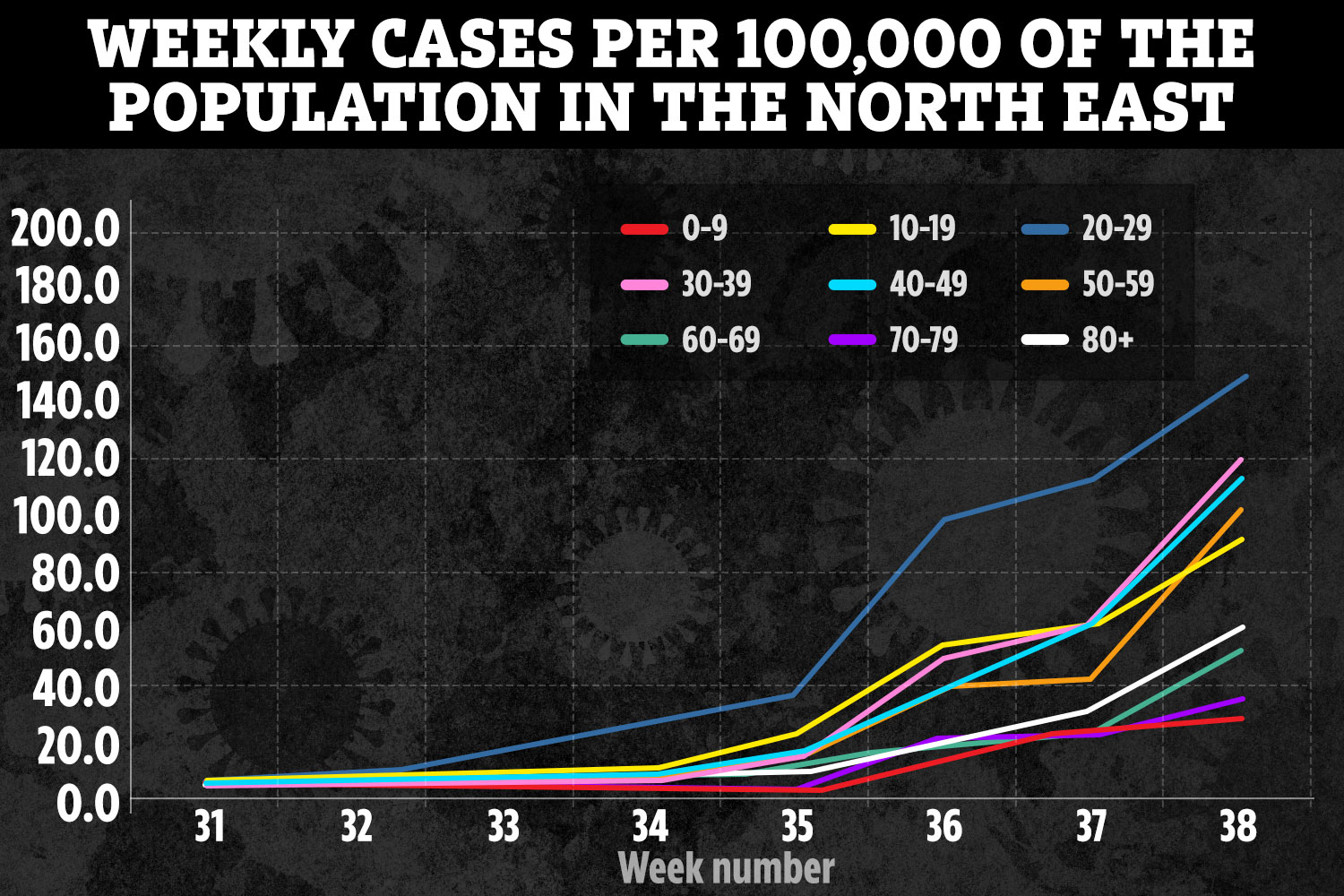 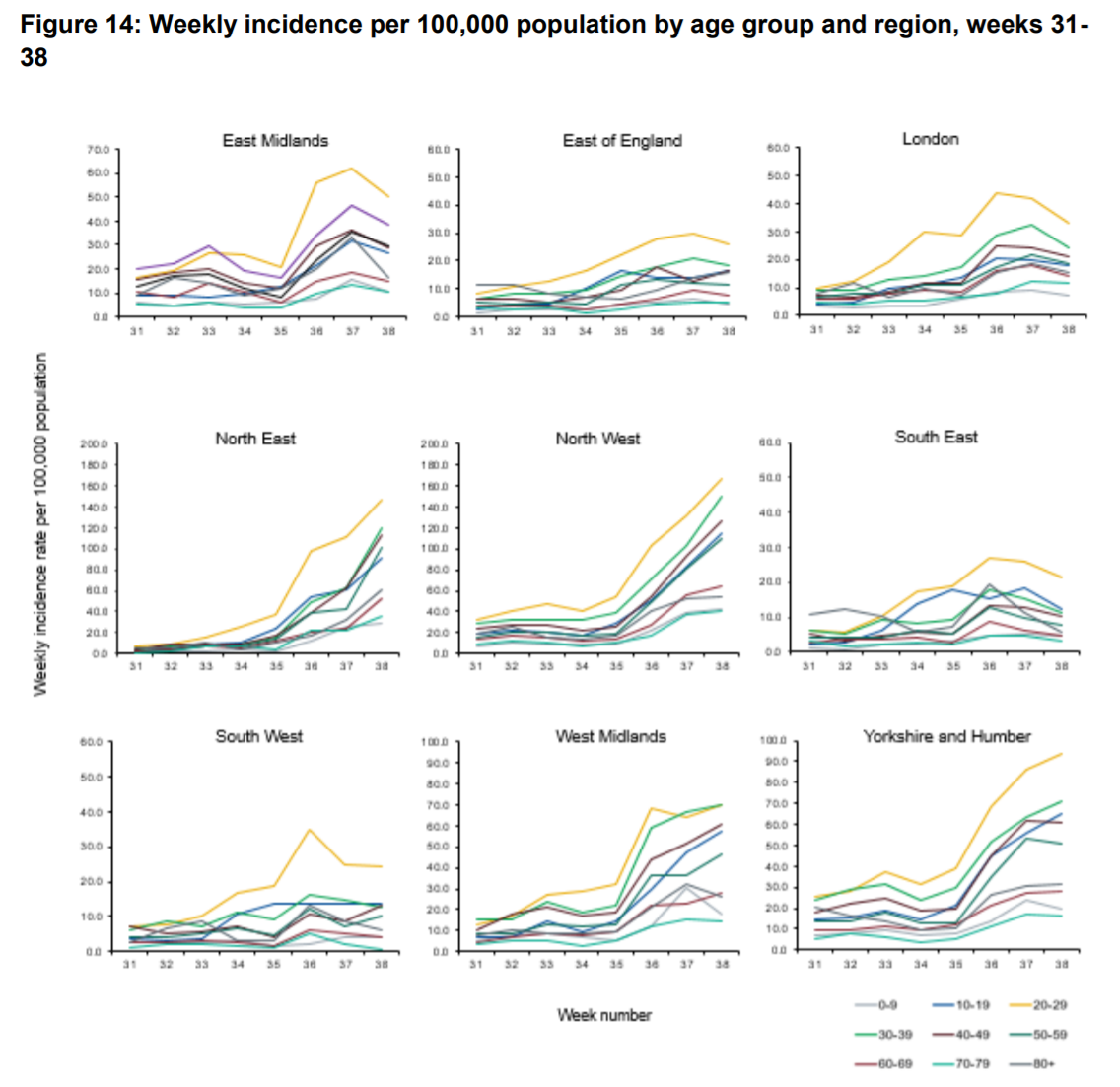 As well as parts of the North East, 33 other parts of England and Wales face tougher restrictions.

And the PHE data shows regions like London, where there are currently no restrictions in place, also have high case numbers. The capital has recorded 550 cases per 100,000 or 49,333 cases in total.

The areas in England under tighter Covid-19 restrictions

The North East has faced a host of new restrictions this week, but other areas of the country are also limited.

Leeds, Wigan Stockport, Blackpool: People cannot mix in homes or gardens with anyone outside their household

Bradford, Kirklees, Calderdale, Wolverhampton, Oadby and Wigston: People are banned from socialising with anyone who is not part of their household inside or outside

Birmingham, Solihull and Sandwell: People are not allowed to mix with anyone they don’t live with at their home or in their garden – unless they are part of their support bubble

Greater Manchester – including Salford, Bury, the City of Manchester and Oldham: Can’t mix with people outside their household or support bubble

Bolton: Visitor limit on care homes – takeaway service only at pubs and restaurants that have to close between 10pm and 5am

Blackburn with Darwen and Pendle: Don’t meet anyone who isn’t from your household outdoors. 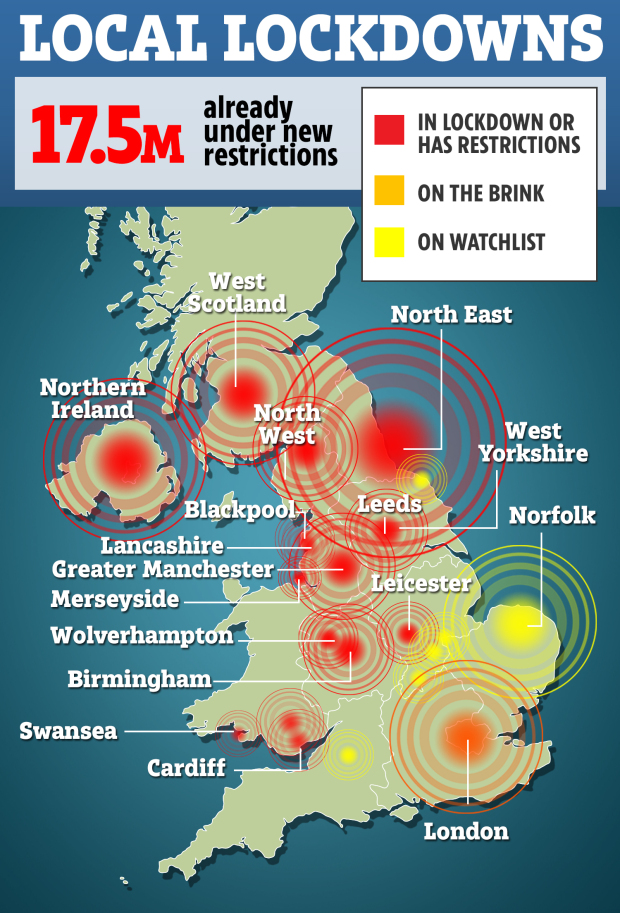 MPs have hit out at the restrictions imposed on the North East and have claimed that ministers have not informed them before taking further measures.

Newcastle City Council's leader, a member of the Labour Party, Nick Forbes said while they want to work "constructively" with the government it can be difficult to do so when they are "making it up as they go along".

"We have demanded clarity on the new restrictions, testing and support for those businesses most affected."

Other officials have demanded clarity and the police and crime commissioner for Northumberland, Kim McGuinness said: "It is an utter disgrace that myself, local council leaders and our police force found out about the tightening of the North East Covid restrictions on the news.

"You can't blame people for being confused when the PM doesn't know which was is up! The government must do better".

The Prime Minister faced backlash from residents in the North East after he was unable to clarify lockdown restrictions.

Yesterday Boris Johnson became confused when he was asked whether or not residents in the North East would be able to meet friends in pub gardens.

The PM tied himself in knots over complex laws that ban households from meeting in vast swathes of the North East. He also got muddled over the “rule of six”, wrongly saying it did not apply to gatherings outside.

Mr Johnson was later forced to clarify with a tweet saying “apologies, I misspoke” and confirming that people should avoid meeting other households in pub gardens in locked-down areas.

However, it will not be against the law to do so, and people will not face fines — though it will be against official guidance.

Hours before the PM’s gaffe, Skills Minister Gillian Keegan admitted she had no idea when and where people could meet up in the region during a car crash interview. She claimed she did “not represent the North East” as an explanation for not knowing.

But No10 admonished her, saying the Government represented all parts of the UK — before the PM made the same mistake.

The new 10pm pub closures have also sparked chaos in town centres across the country, with drinkers piling out of boozers to buy more at off-licences.

Other areas in the UK that have been placed under stricter restrictions include Bolton in the North West.

Bolton has 206.9 cases per 100,000 of the population and restrictions were brought in earlier this month when Bolton was experiencing the highest rate of coronavirus cases in the country.

The Conservative leader of Bolton Council said the restrictions on the area were "breeding resentment".

He said: "I still think there's an element of Government, because the restrictions are so complex, that doesn't understand the huge disparities there are up and down the country."

He said businesses were on the "brink of bankruptcy".

He added: "These are people who have put their life savings into business ventures that are successful but are just not now being allowed to operate, and the Government, I plead with them, they now need to recognise this huge disparity, this inequality, which is unacceptable."

He said residents were continuing to visit pubs in surrounding boroughs, which remain open, and the measures had not stopped the spread of Covid-19.