The contractual dispute has erupted between the state’s Jobs and Justice Department and security firm Unified Security Group, which was hastily retained by the Victorian government to carry out security at 12 quarantine hotels during the COVID-19 pandemic. 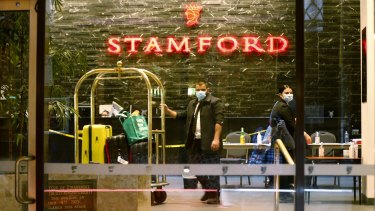 Masked workers inside the Stamford hotel during the quarantine program.Credit:Getty Images

Unified Security, the government’s main contractor of quarantine hotels when the second wave of the pandemic struck Victoria, claims the government is unlawfully withholding $9,739,804, plus GST.

The security company claims the state government has not paid them adequately for “ancillary” services which they performed for hotel guests.

Unified Security placed 1754 guards, hired largely through subcontractors, across 13 quarantine hotels (one hotel is not part of the lawsuit) at a cost of at least $30 million. The Age previously revealed the total cost of using private security to guard quarantine hotels was more than $60 million.

Documents also reveal Unified Security claims the state government and the firm had a common assumption that they wouldn’t put all aspects of the services it provided in writing.

It meant services rendered by Unified Security were not always approved by the state government and were not always captured in the contracts quickly hammered out by both parties as they hastily scaled up capacity to manage the high-stakes quarantine project.

“The parties adopted a common assumption that the State of Victoria, as represented by the DJPR, would not approve in writing the scope of services for a particular Hotel Quarantine Facility prior to Unified Security delivering the services,” the writ claims. 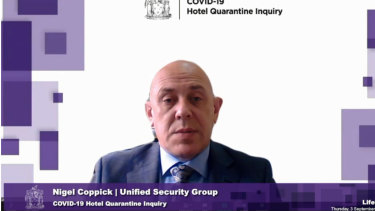 Court documents also showed that Unified Security claim they sent dozens of invoices to the state government which went unpaid.

The security company also claims the government is withholding money owed to subsidiary companies contracted by Unified Security needed to quickly scale-up their workforce to deal with the job of guarding all the hotels.

The government has not yet filed a defence and the matter has not yet been listed for hearing.

Both Unified Security and the state government declined to comment.

The most important news, analysis and insights delivered to your inbox at the start and end of each day. Sign up to The Sydney Morning Herald’s newsletter here, to The Age’s newsletter here and Brisbane Times‘ here.