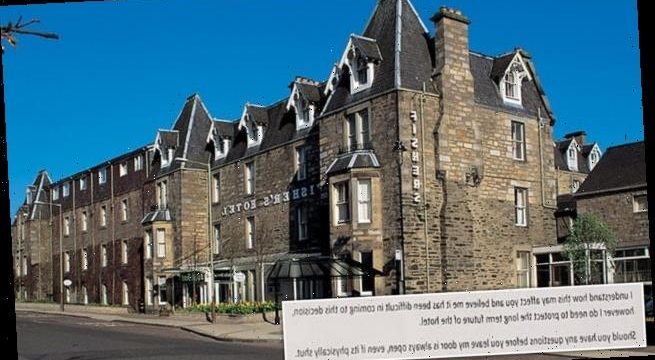 Bosses at a Scottish hotel have been branded ‘callous’ for sacking workers and forcing them out of their accomodation ‘with nowhere to go’ just weeks before Christmas.

Letters were sent to around 17 staff at Fisher’s Hotel confirming the ‘sad and difficult decision’ to terminate their employment and asking them to leave their digs.

The 130-bedroom hotel was taken over by Dublin-based Castle Hotel Group in 2011, who said it needed to reduce its payroll while the Pitlochry hotel in Perthshire continued trading at ‘very low levels’.

General manager Brian Wishart said the workers were let go after the hotel was denied government support and claimed supporting their staff through the furlough scheme would cost them £100,000. 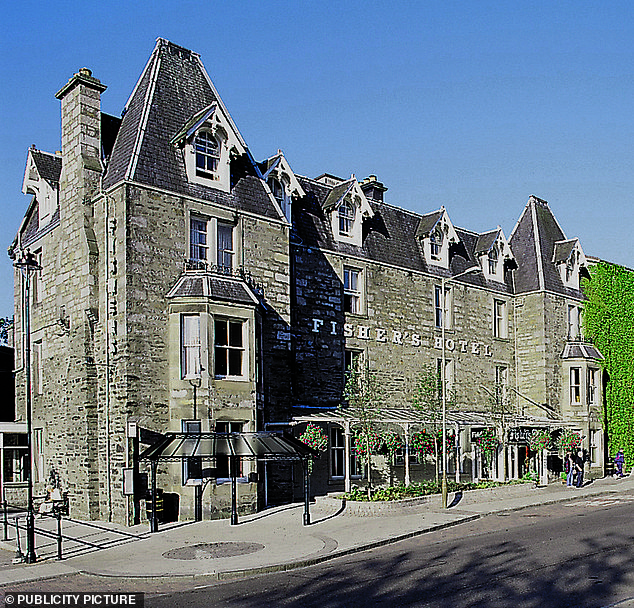 Bosses at the 130-bedroom Fisher’s Hotel in Pitlochry, Perthshire, said it needed to reduce its payroll while the hotel continued trading at ‘very low levels’ 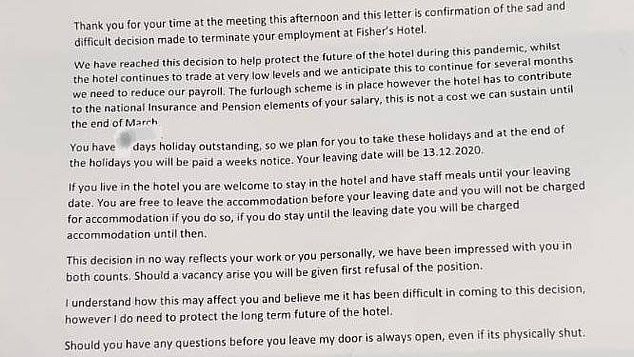 Letters (pictured) were sent to around 17 staff at Fisher’s Hotel confirming the ‘sad and difficult decision’ to terminate their employment.

The government announced a support package for businesses struggling to pay their workers at the start of the pandemic.

The Job Retention Scheme (JRS) saw the Government cover 80% of the salaries of all employees who had been furloughed, with no cost to the employer.

The scheme was intended to prevent workers from losing their jobs as businesses struggled during the pandemic.

Chancellor Rishi Sunak announced earlier this month that the scheme would continue until March next year.

He said: ‘Extending furlough and increasing our support for the self-employed will protect millions of jobs and give people and businesses the certainty they need over what will be a difficult winter.’

Under new measures employees will receive 80% of their current salary for hours not worked.

Employers would not have to contribute to this payment, but would be asked to cover National Insurance and employer pension contributions for hours not worked.

For an average claim, the government website says this accounts for just 5% of total employment costs or £70 per employee per month.

But a hospitality workers union has called on them to reverse the decision saying the hotel group ‘can and should be using’ the furlough scheme, claiming this would cost the company ‘as little as £50 per month per worker’.

In a letter to the affected group of staff, Mr Wishart wrote: ‘We have reached this decision to help protect the future of the hotel during this pandemic.

‘The furlough scheme is in place, however the hotel has to contribute to the National Insurance and pension elements of your salary – this is not a cost we can sustain until the end of March.’

Staff who live in the hotel are allowed to stay until their leaving date, without charge.

They were told: ‘I understand how this may affect you and, believe me, it has been difficult in coming to this decision, however I do need to protect the long-term future of the hotel.’

The letter also added: ‘Should you have any questions before you leave my door is always open, even if it’s physically shut.’

The Unite Hospitality union has pointed out that many employees are from EU countries such as Poland, Hungary, Spain and the Czech Republic and may have nowhere to go.

A spokesman said: ‘Castle Hotel Group can and should be using the Job Retention Scheme (JRS) to continuing furloughing until March 2021. This would cost the company as little as £50 per month per worker.

‘We call upon Castle Hotel Group to withdraw this callous action just three weeks before Christmas and use the JRS as intended.’

Staff leaving dates vary depending on holiday allocation, but one employee’s letter states that they must get out by December 13.

It is understood the majority of staff have made arrangements to travel home for Christmas, with a few others getting extra help from Perth and Kinross Council.

Mr Wishart said that the group of affected staff were recruited recently, after the hotel reopened in July, and ‘they would have been advised that this would have been a possibility when they joined’. 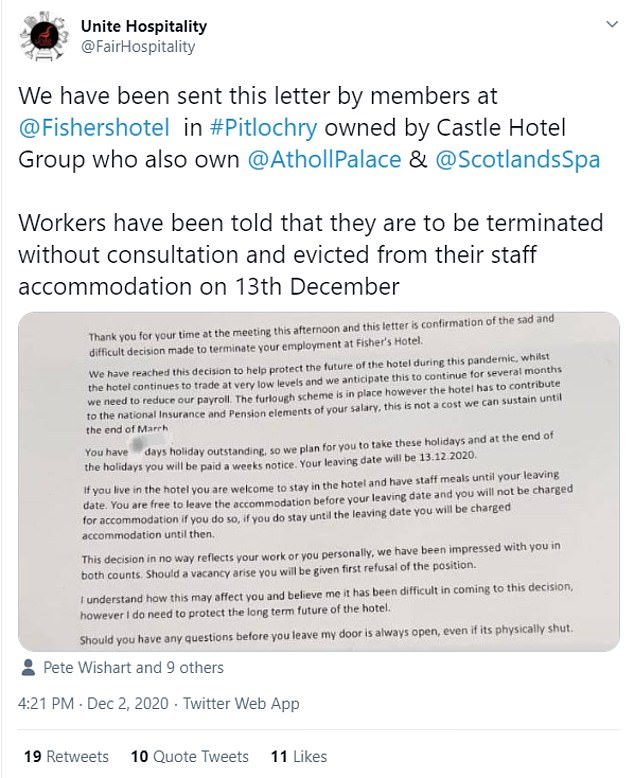 He said: ‘We did hope to take the entire team with us through the winter, however we were denied grant aid.

‘The cost of the furlough scheme would have exceeded £100,000, and this is a cost the hotel could not sustain without government assistance.

‘All staff were asked to contact me should they have any difficulties arranging flights home or had difficulty finding alternative accommodation and I am assisting those who have come forward.

‘It is never ideal to lose staff, especially such a nice group of people.

‘With the current restrictions, while I can’t be certain when we will require to increase our staff, they have been advised we will give them first refusal on any future jobs.’

During lockdown, Fisher’s was able to retain its entire workforce, with 25 staff living in the hotel and offering hot meals to the community. 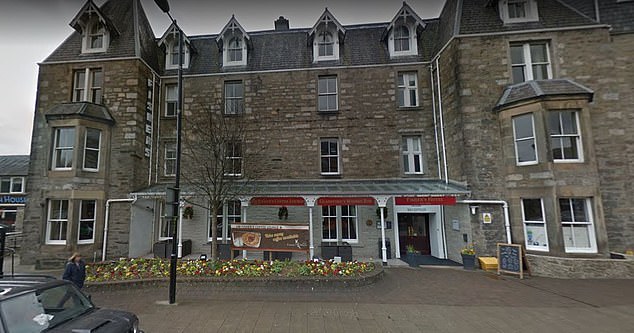 Fisher’s, which usually welcomes 75,000 visitors a year and gets a boost each October from the Enchanted Forest, was renovated following a major fire in the early hours of New Year’ s Day 2017

He said: ‘While this pandemic has been particularly difficult for our hospitality sector, there is significant government support in place to ensure that businesses are able to continue to employ their staff.

‘It is also the case that the majority of the affected workers will be from countries within the European Union. Without a job or a place to stay, they will likely be forced to return to their home country.

‘As a result of the end of freedom of movement, it may well be the case that – through no fault of their own – they will be unable to return to Scotland.’

He said he will contact the hotel owners ‘as a matter of urgency to better understand their thought process and urge them to reconsider’.

The hotel has stood in the centre of Pitlochry for nearly 200 years.

Fisher’s, which usually welcomes 75,000 visitors a year and gets a boost each October from the Enchanted Forest, was renovated following a major fire in the early hours of New Year’ s Day 2017.

There are no redundancies at Pitlochry’s Atholl Palace Hotel, which is also owned by the Castle Hotel Group.