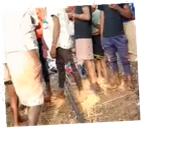 DISTURBING video footage has emerged showing a teenage girl tied to her alleged rapist as she is paraded and beaten by her own family to shame her.

The 16-year-old girl can apparently be seen with a rope tied to the 21-year-old suspect with ropes, as a mob chanted slogans in the Alirajpur district of Madhya Pradesh yesterday. 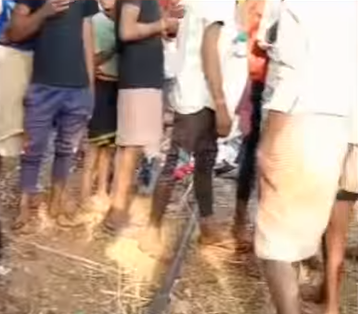 The Sun Online has viewed the footage but has chosen not to publish it.

Dozens of men could be heard yelling “Bharat Mata Ki Jai”, which means “Long Live Mother India” as she was dragged along the dirt road.

The young girl’s family were also among those who forced her to walk with her alleged attacker — who is married with two children — to shame her, according to local media.

Relatives of the alleged victim were reportedly among those beating her.

The girl can be seen sitting in front of her attacker with her head in her hands while surrounded by the baying mob at one stage.

Six people, including the alleged rapist, were arrested by police after the video went viral and caused outrage in India.

Cops were able to free the girl while she was being paraded, police officer Dilip Singh Bilwal told local news agency PTI.

Two cases had been registered against the alleged rapist as well as family members and villagers.

Mr Bilwal told reporters: “One of the cases was registered against the 21-year-old man who is accused of rape.

“Another First Incidence Report was registered against family members of the girl and villagers for parading her in the village and beating her.”

India's abysmal record on sexual violence has become the focus of international attention, with one woman being sexually attacked every 15 minutes on average in 2018, government data shows.

In 2019, a woman, 23, was set on fire by a gang of men in Uttar Pradesh as she travelled to court to press rape charges.

But, of these victims, only 14 per cent sought help and 77 per cent never spoke about it.

Nearly 34,000 rapes are reported in the country annually despite tough laws introduced in recent years.

Rape and sexual violence has been under the spotlight in India since the 2012 gang rape and murder of a young woman in Delhi, which prompted thousands demanding stricter laws.

Outrage over her death led to legislators passing tough new laws against sexual violence, including the death penalty for rape in some cases.

Prison sentences for rapists were doubled to 20 years as well as criminalising voyeurism, stalking and trafficking of women.