HOPES are rising for millions of drivers that fuel duty might NOT rise in next week's Budget after The Sun's Keep It Down campaign.

Mr Sunak is under pressure to keep the freeze on fuel duty rises as he searches for how to fill his Covid black hole. 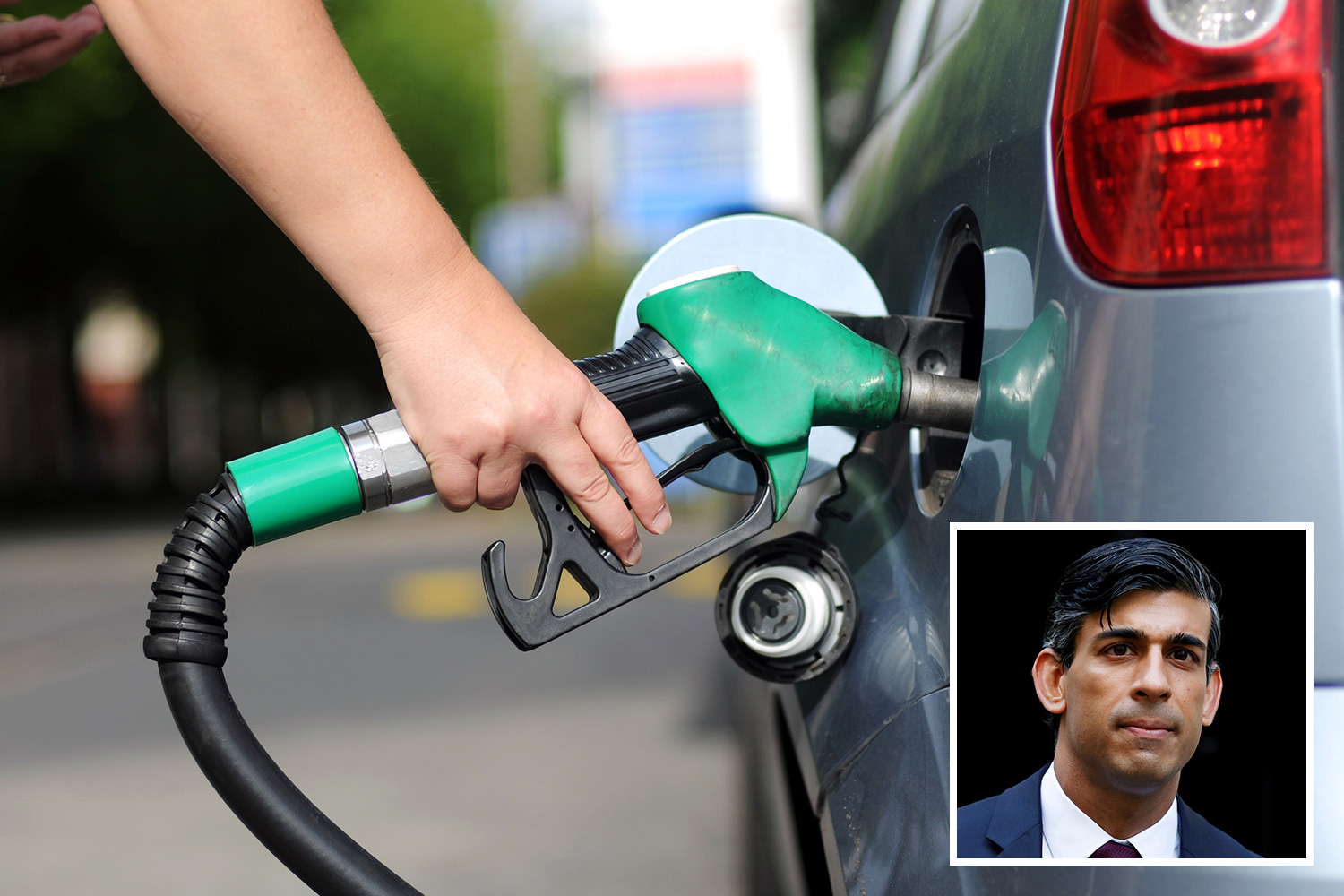 Pleas not to hike fuel duty — backed by The Sun’s Keep It Down crusade — come as a new eco-petrol is sanctioned for use at UK pumps.

Ministers signed off plans for E10 — a mix of petrol and ethanol made from materials including grains, sugars and waste wood — from September.

The cut in emissions will be like taking 350,000 cars off our roads.

The hopes of Rishi keeping fuel duty down come after The Sun revealed how more than two dozen Tory MPs have written to him urging him not to raise fuel tax in his Budget.

They say Boris Johnson made a pledge in 2019 not to increase the hated levy and breaking the vow would betray voters.

The 58p-a-litre levy is in the Chancellor’s sights.

But the letter shows Downing Street faces a major rebellion on Mr Sunak’s Budget if drivers are targeted.

The warning shot was organised by Rob Halfon MP and Howard Cox, of Fair Fuel UK – who have been working with The Sun to “Keep It Down” for a decade.

It says the move would “create significant economic difficulties” for millions.

The letter says analysis by the Centre for Economics and Business Research shows “a hike of 2p would cut GDP by £600million, reduce employment by 8,000 jobs and add 0.6% to inflation”.

And many are thought to have been using their cars over public transport to try and avoid catching Covid- another reason the Chancellor has been put off.

Tory MP Mr Halfon said: “If the Government needs funds, it should tax millionaires, rather than millions of hard-working Brits.”

Howard Cox added: “Truckers and van drivers are the solution to get back to sanity. 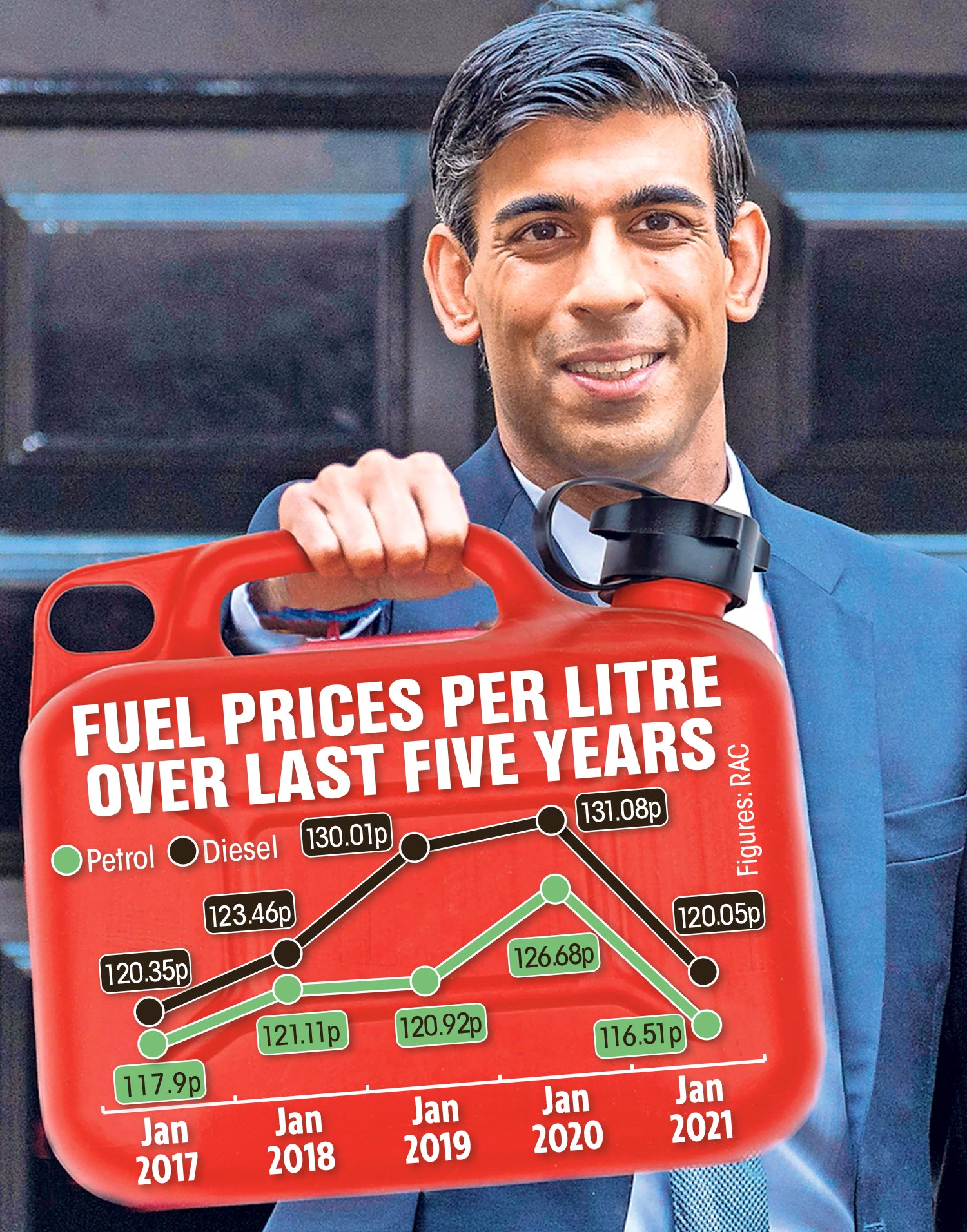 “Burdening them with more costs will risk economic recovery and those new red-wall Tory voters will suffer the far-reaching increases in shop prices and loss of jobs.”

A rise of 3p a litre would raise £1billion for the Treasury — but also cost van drivers a punishing extra £250 a year to fill up.

It would also lead to price increases for online sales — with nine in ten households now dependent on home deliveries.

Fuel costs have soared by £4 a tank since December as the average pump price nears 122p.

THE new unemployment figures should send a chill down Rishi Sunak’s spine.

His upcoming Budget could so easily make matters worse.

The Chancellor is focused on jobs, and rightly so. But almost every day brings a new leak of a worrying Treasury plan to raise this tax or that.

Our views on the madness of hammering working people with extra fuel duty are well known.

But hiking corporation tax from the low levels which helped the Tories conjure a job-creation miracle in the last recession is similarly crazy.

Unemployment is at a five-year high. Once the furlough ends, the dole queue is likely to lengthen dramatically.

Mr Sunak must learn from history.

In the decades after World War Two, the US and West Germany encouraged the free market with lower taxes and far less state intervention.

By the 1970s, Britain was Europe’s basket case, begging a handout from the International Monetary Fund.

In the post-Covid era we could raise taxes, maintain the State at pandemic emergency levels, as Labour would love, and entrench our decline for decades.

Instead we must use low taxes to create jobs, investment and growth and capitalise on our new independence outside the EU.

The Chancellor's Budget is expected to be an expensive and painful
sandwich of giveaways and tax hikes.

Insiders are calling it “two big slices of bread with very thin jam”.

Slice one is a £30billion Covid support bundle that will see furlough, business relief, the Universal Credit uplift and stamp duty holiday all extended to June.

Doing this for three months more, to bring those measures in line with the
Government’s programme for coming out of lockdown, leaves “thin jam” — or little to spend elsewhere.

Slice two is a painful package of tax hikes to start raising billions to close the UK’s budget deficit, which will hit £400billion by April.

Experts say that needs reducing by around £30-40billion now to stabilise borrowing and prevent debt from rising as a percentage of national income.