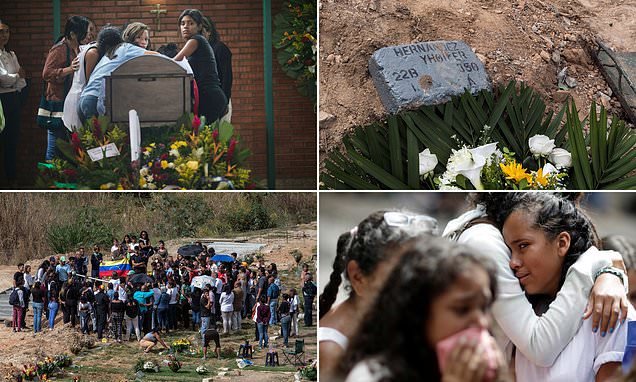 Grieving family members and friends were at the funeral of a 14-year-old boy shot dead during a fierce uprising in the Venezuelan capital Caracas.

Yhoifer Hernandez was one of five people killed after thousands launched protests against President Nicolas Maduro on Tuesday and Wednesday.

The child was hit by gunfire during Wednesday’s clashes in Caracas, while 16-year-old Yosner Graterol died from a gunshot wound after unrest in the northern town of La Victoria on Tuesday. 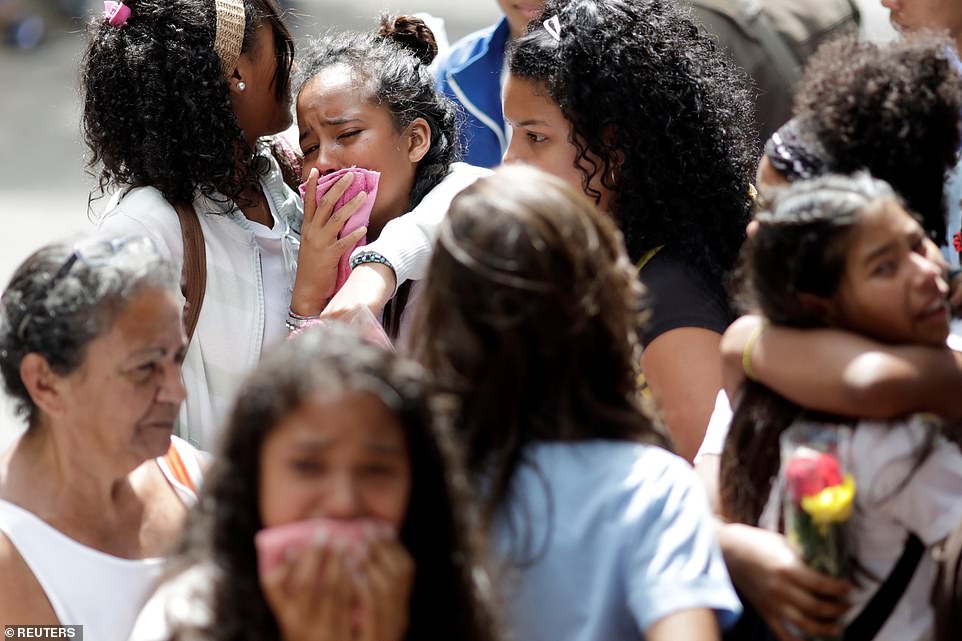 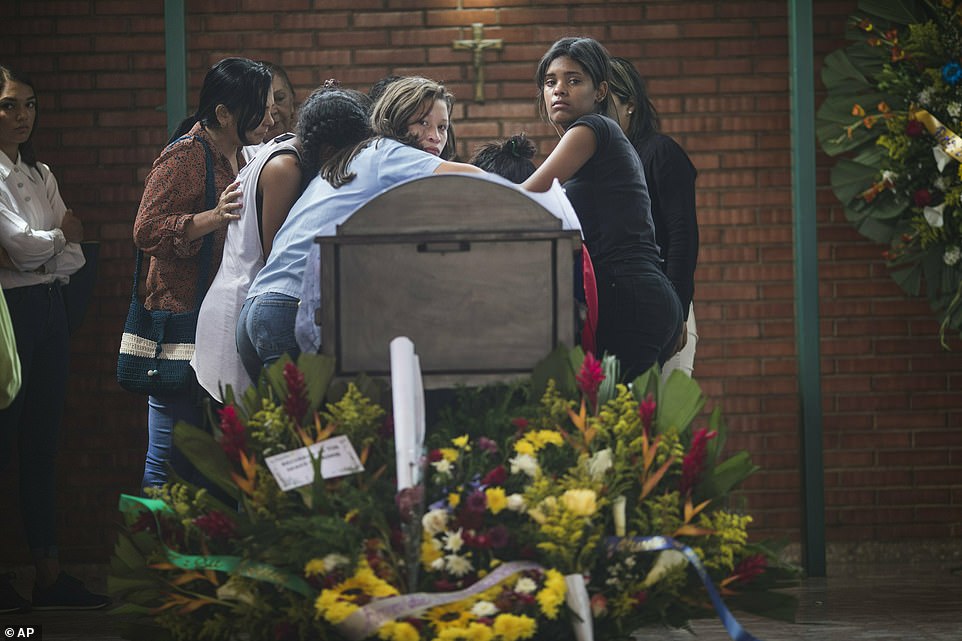 The heartbreaking scenes were captured at the Eastern Cemetery in La Guairita, Caracas, where the boy was buried yesterday 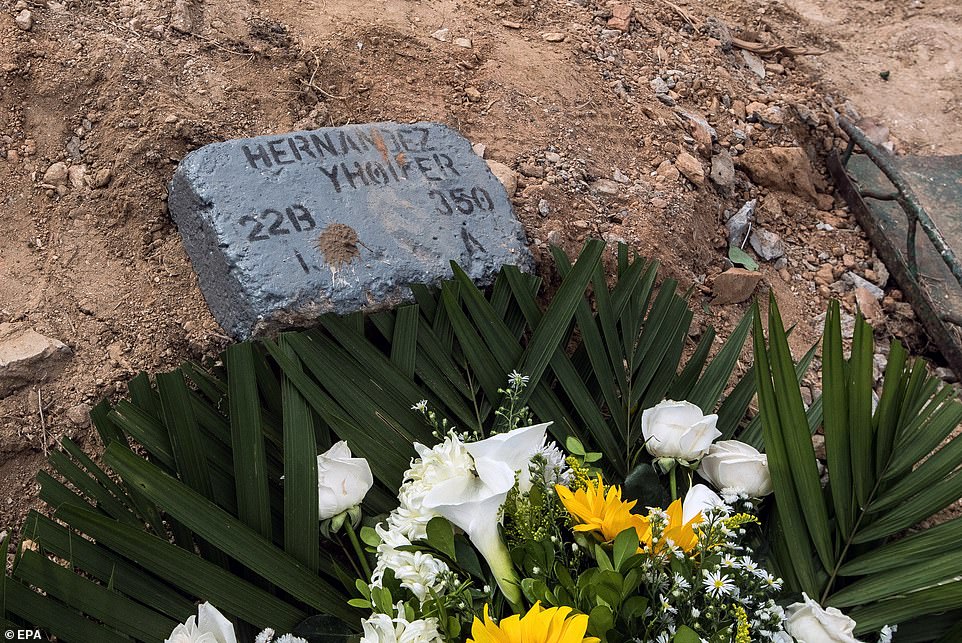 Yhoifer’s tombstone yesterday was a grey, mud-splattered brick, which was adorned with flowers after the emotional service 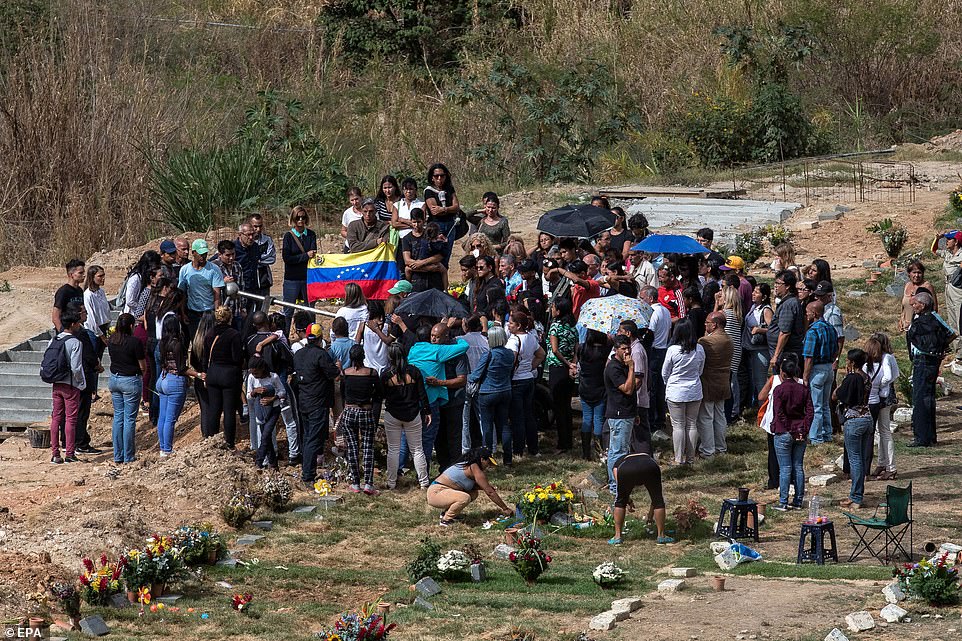 A crowd of around 100 people gathered in the sandy graveyard for a service, with some seen holding umbrellas and another clutching the flag of Venezuela 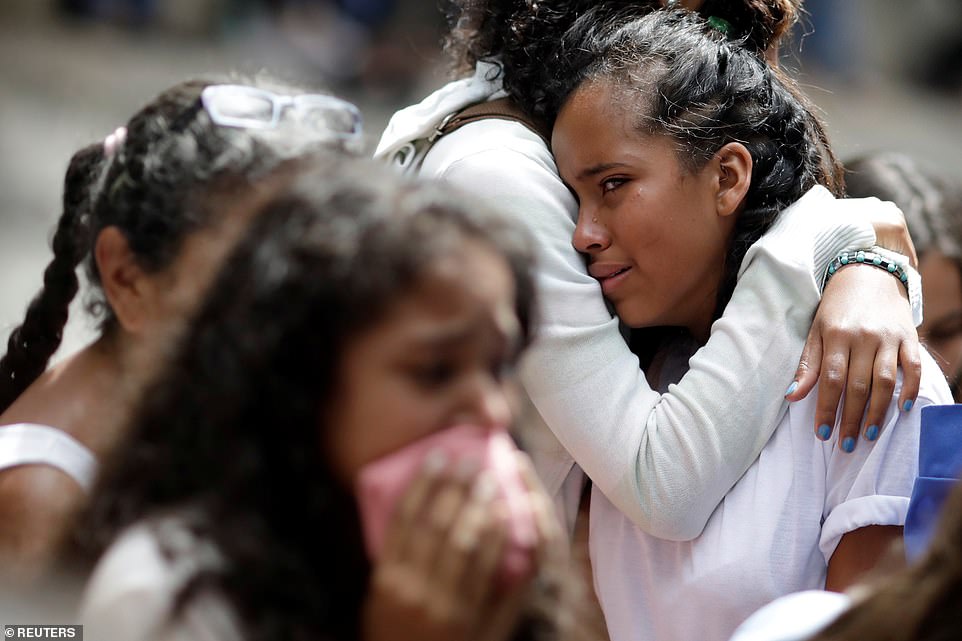 A girl is consoled by a women as she weeps into her arms during the service. Yhoifer was hit by gunfire during Wednesday’s clashes in Caracas, while 16-year-old Yosner Graterol died from a gunshot wound after unrest in the northern town of La Victoria on Tuesday

Heartbreaking pictures show Yhoifer’s relatives and supporters break down in tears at the Eastern Cemetery in La Guairita, Caracas, as they buried the child yesterday.

A group of female attendees can be seen desperately clinging to Yhoifer’s coffin – which had been covered with a white sheet during a service.

Another image shows the mud-splattered slab of brick used as his tombstone, which has his name sprayed on to it in black paint.

A crowd of around 100 people gathered in the sandy graveyard for a service, with some seen holding umbrellas and another clutching the flag of Venezuela. 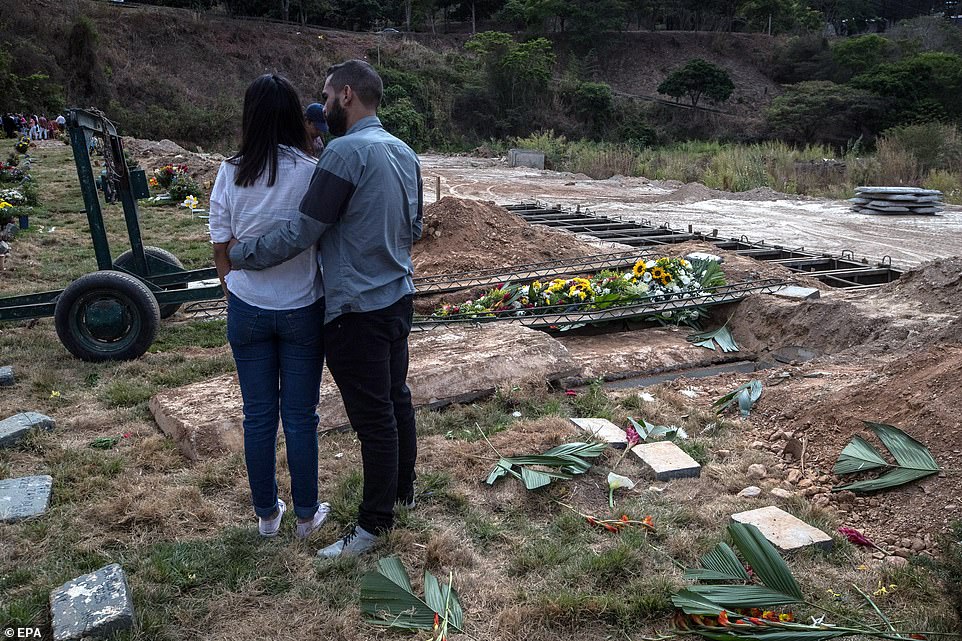 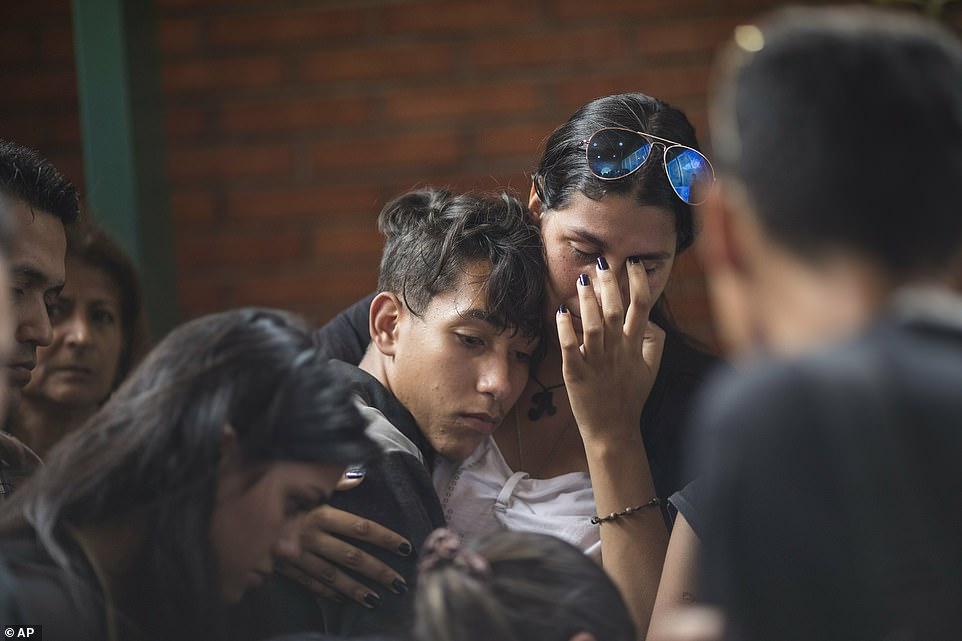 A boy, believed to be a friend of Yhoifer, bows his head and hugs a woman during the service yesterday. The woman wipes her eyes during the gathering 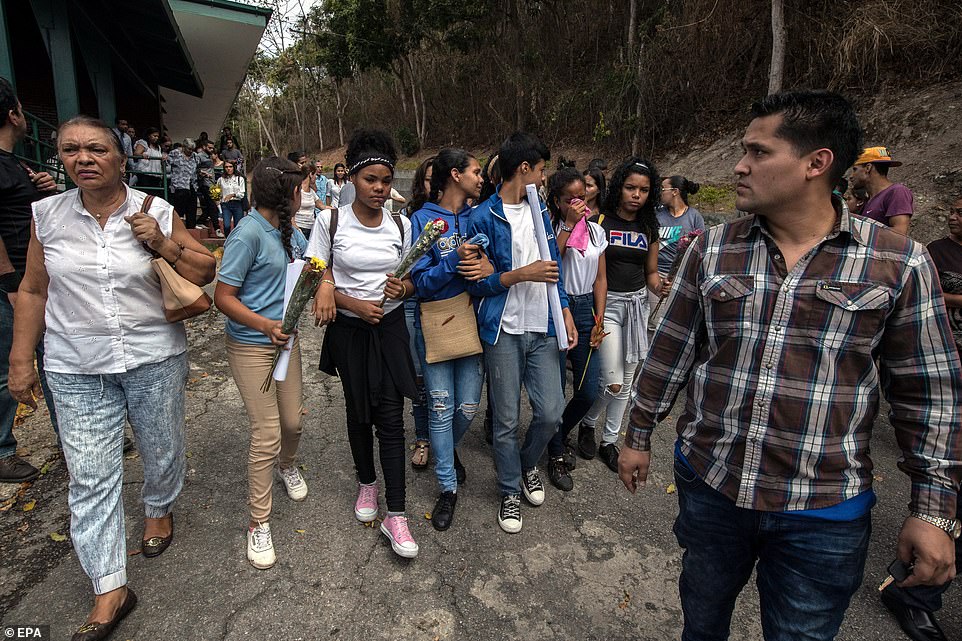 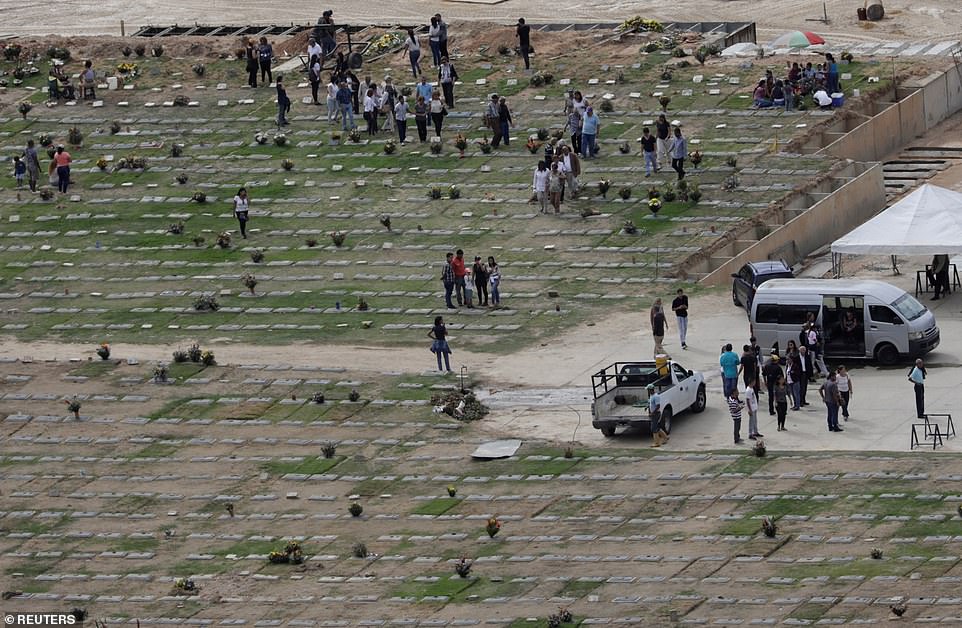 An alternative shot shows groups of people after the ceremony for 14-year-old Yhoifer yesterday. Heartbreaking pictures showed his friends and family break down in tears during a ceremony for him 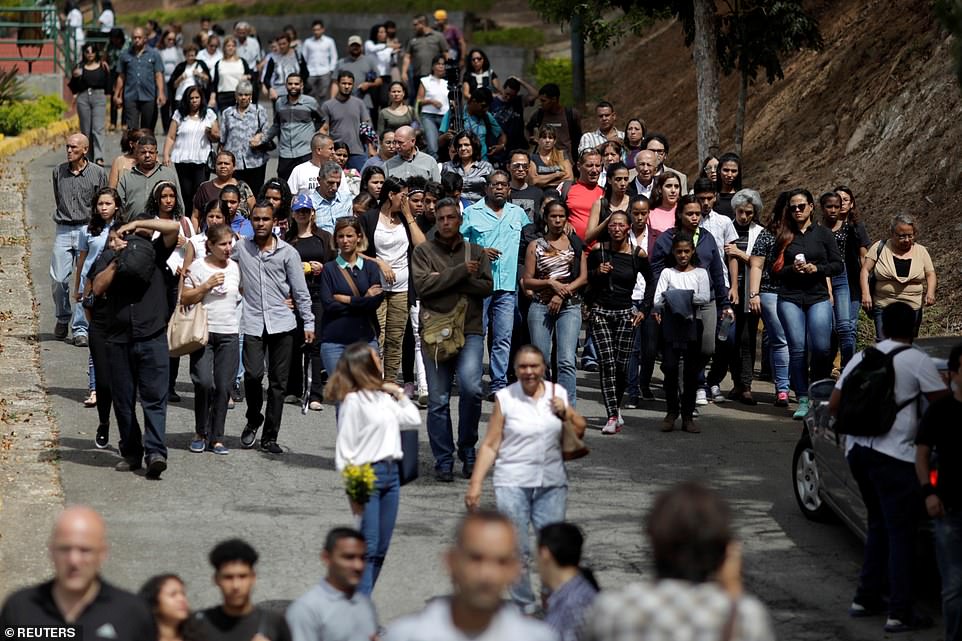 The crowd of around 100 friends, family and supporters of the cause against President Nicolas Maduro walk towards the graveyard yesterday

It follows a week of bloodshed in Venezuela as the military loyal to President Maduro crushed an uprising inspired by opposition leader Juan Guaidó.

Mr Guaidó has urged his supporters to converge on military garrisons to try to persuade military forces to turn against Maduro, whose years in office have been marked by escalating hardship for most people in a country that was once one of the wealthiest in Latin America.

But in a show of strength yesterday, President Maduro posed for a photo with thousands of his soldiers and bellowed ‘loyal forever’ to a crowd of cadets in green uniforms. 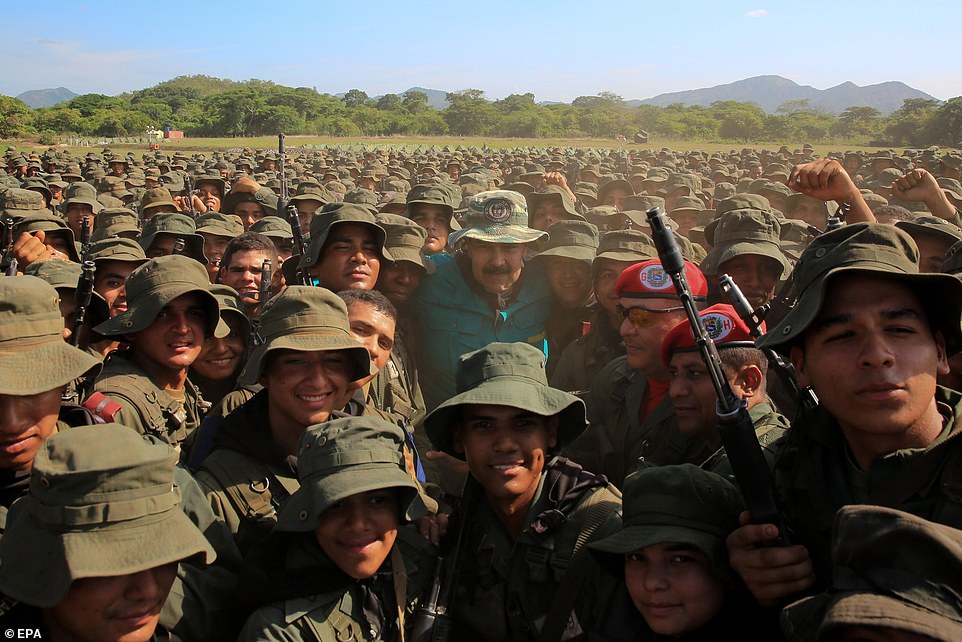 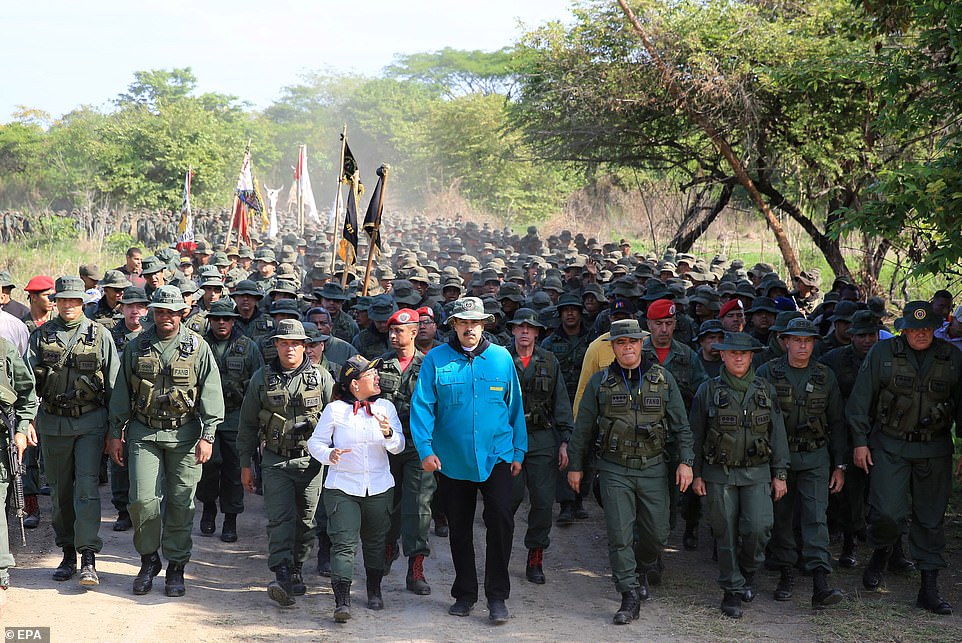 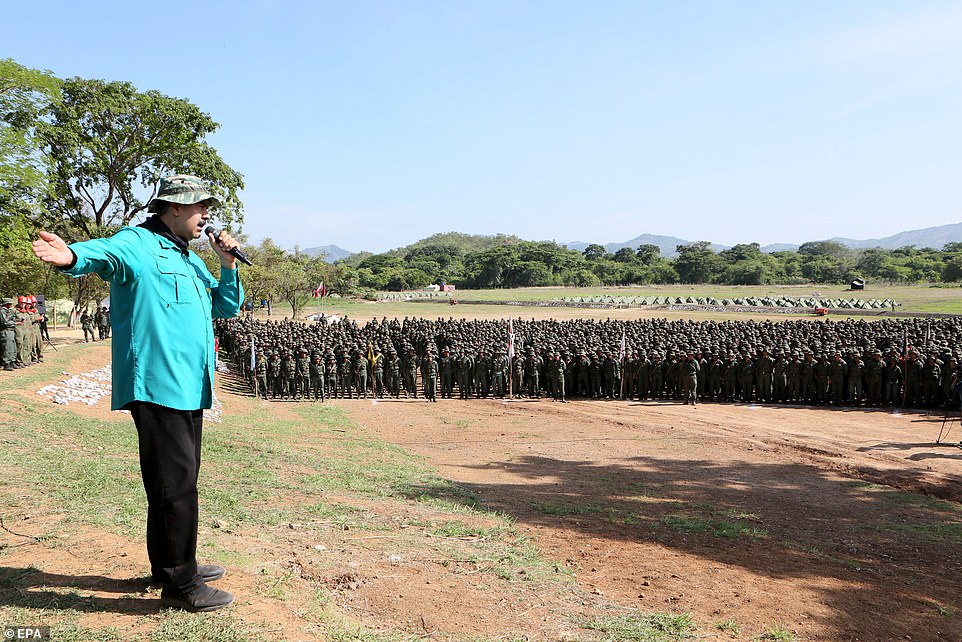 ‘Loyal forever,’ Maduro bellowed to a crowd of soldiers and cadets who had joined him on the march of ‘loyalty’ yesterday

But this morning, in a blow for President Maduro, seven Venezuelan military officers were killed after their helicopter crashed while heading to the state where he appeared alongside troops.

The Cougar helicopter hurtled into a mountain outside Caracas in the early hours of an overcast day in the capital and an investigation has been launched.

On board the helicopter were two lieutenant colonels as well as five lower-ranking officers.

The statement did not say if the chopper was part of the presidential delegation. 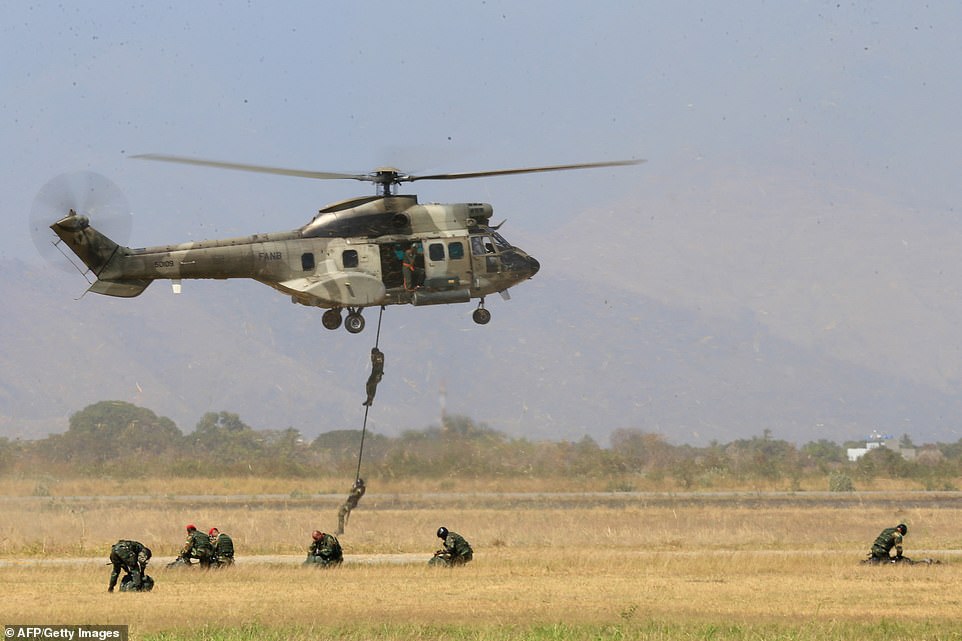 A French-made Cougar helicopter is shown during a military exercise on January 29. Seven military officers were killed when a helicopter (similar to that pictured) crashed into a mountain outside Caracas this morning

Also in Caracas yesterday, a protester handed over a written appeal for the military’s support, only for a Venezuelan policeman to burn the document in front of him.

The armed forces ‘won’t be blackmailed or bought’, said a second officer standing nearby.

Benito Rodriguez fumed as he watched the events unfold.

‘It’s a humiliation,’ said Mr Rodriguez, a demonstrator who had joined a crowd of about 150 protesters gathered near La Casona, a residence historically used by Venezuelan presidents.

The scene highlights the uphill battle now facing opponents of Mr Maduro who have failed to persuade the country’s security forces to join efforts to oust the leader. 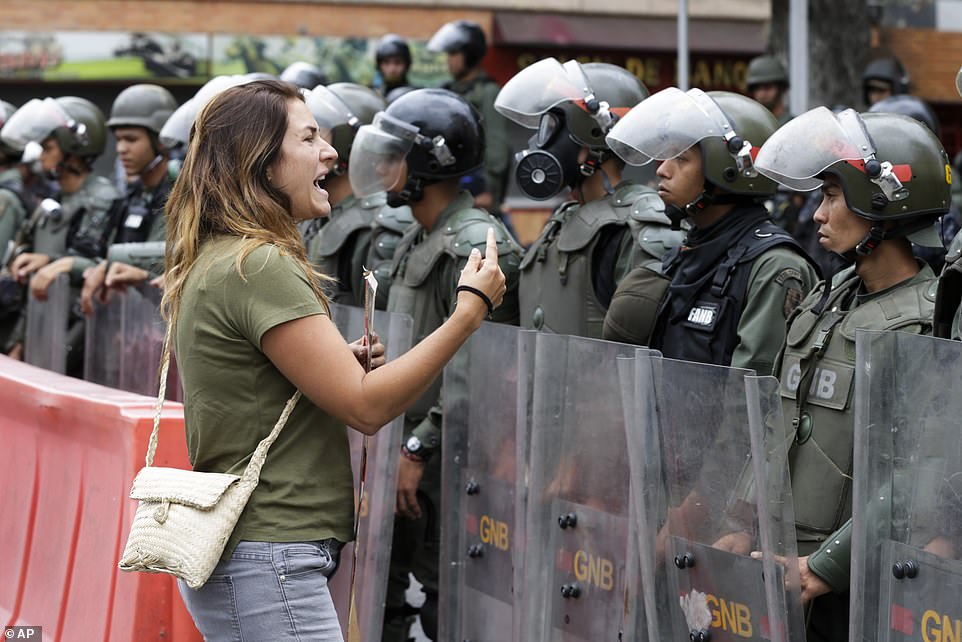 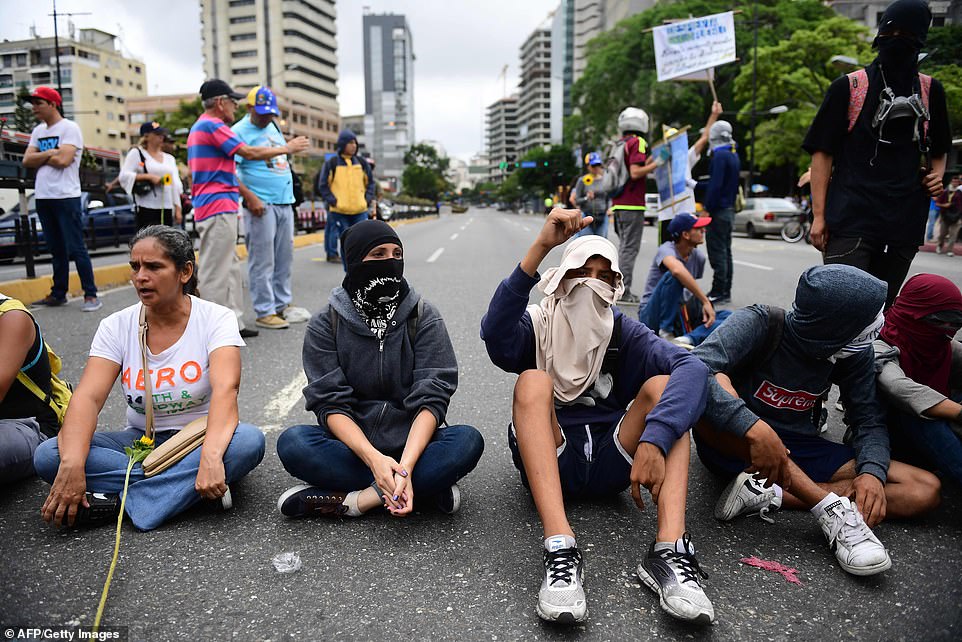 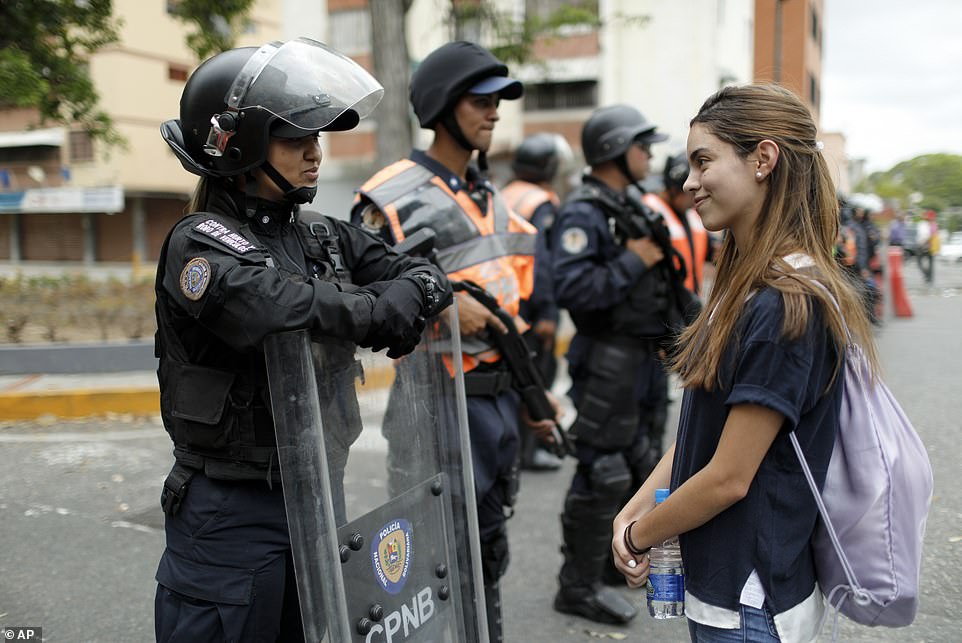 A woman, who is against Venezuela’s President Nicolas Maduro, smiles at a riot police officer during a march in Caracas yesterday. Opponents of Mr Maduro now face an uphill battle to persuade the country’s security forces to join efforts to oust the leader

The critical role of the Venezuelan military in the country’s crisis was on display as Mr Maduro tried to portray strength by joining troops at the military academy, while Mr Guaido attempted to woo the armed forces to his side.

National television showed Mr Maduro wearing a camouflage hat as he shook hands and exchanged fist bumps with security forces during a visit to a military base before watching troops engage in a shooting exercise.

‘Please, a lot of discipline,’ she said. 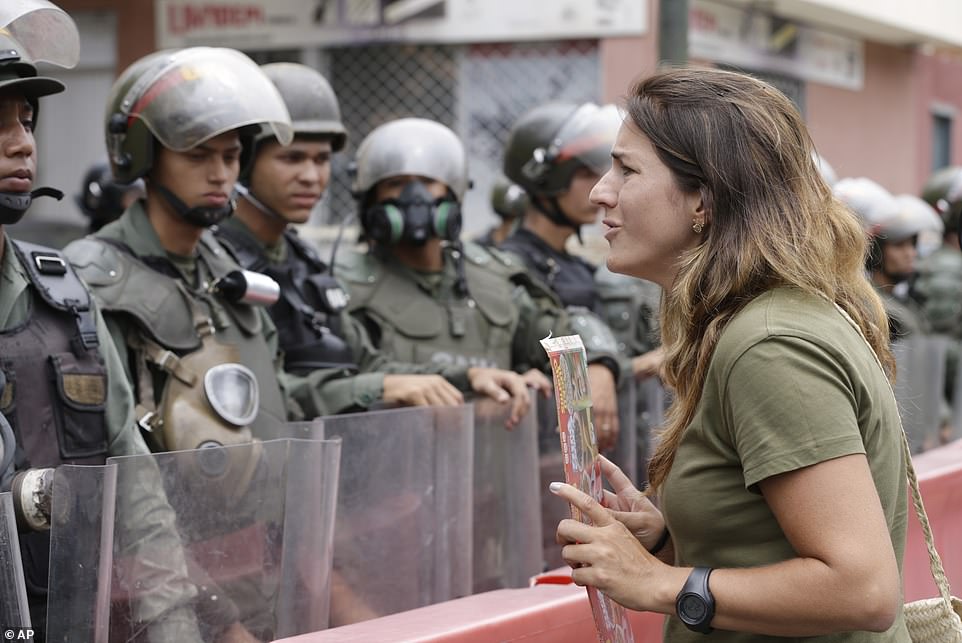 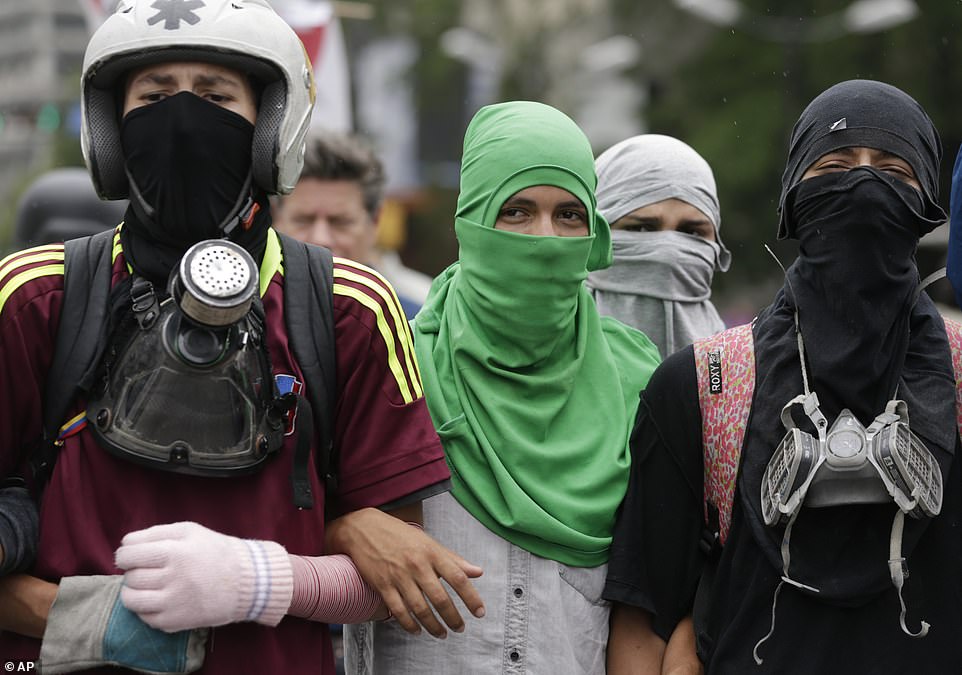 Mr Guaido had called his supporters for a mobilisation outside military installations to press the armed forces to support him, but it appeared to have failed after President Maduro made a speech to the army declaring ‘loyal forever’

Others broke the line and went forward to hand over printed documents, saying the military’s role in helping Venezuela emerge from an ‘unsustainable’ situation is vital.

‘They think it’s a joke. They don’t take us seriously. They’re not listening,’ said demonstrator Andrea Palma after police burned the paper with a lighter.

Divisions among the protesters were evident as some young men from poor neighbourhoods scoffed at a speaker who insisted that the gathering must be peaceful. 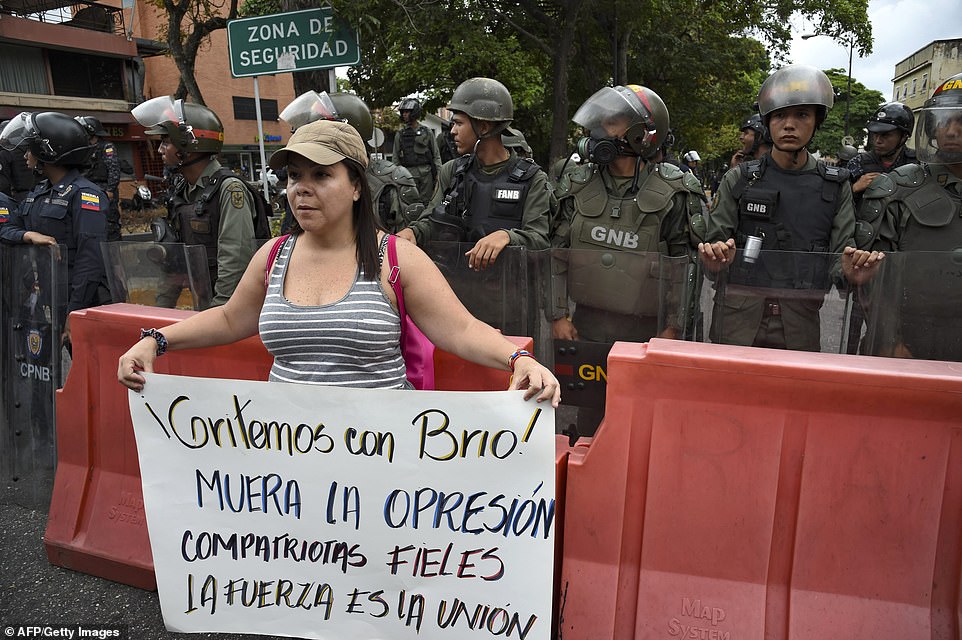 The latest displays of will comes as the political standoff between Mr Maduro and US-backed Mr Guaido sinks deeper into a stalemate.

On Tuesday, Mr Guaido appeared outside a Caracas military base and urged the military to overthrow his political rival.

As the leader of the opposition-controlled National Assembly waited, however, it became clear his call had failed to rally armed forces to his side. Clashes between protesters and police then erupted, leaving five dead.

Mr Maduro’s government has also shown signs of weakness and has not moved to arrest Mr Guaido, who the US and over 50 other nations recognise as Venezuela’s rightful leader.

February 18 2014: Opposition leader Leopoldo Lopez is placed under house arrest after a wave of protests against Maduro.

July 17 2017: Millions of Venezuelans vote down Maduro’s plans to take control of the country’s National Assembly.

May 20 2018: Maduro wins another snap election despite claims of vote rigging by opposition leaders.

January 23 2019: Guaido declares himself acting president at a rally of tens of thousands of people in Caracas demanding that Maduro quit.

Maduro gets the support of allies including China, Russia, Turkey, Mexico and Cuba.

He demands that the Venezuelan government allow in foreign humanitarian aid, claiming the lives of thousands of people are at risk.

February 16: Guaido says he has the support of thousands of people to bring in aid via Colombia, Brazil and the Dutch island of Curacao.

Venezuelan troops however block the road, preventing the aid from entering.

March 7: most of Venezuela is plunged into darkness by a major power cut that lasts five days, followed by sporadic blackouts.

March 24: two Russian military planes bring in around 100 soldiers and 35 tons of equipment.