The former president's allies set their expectations sky-high in the immediate aftermath of Elon Musk's formal takeover of the influential social media platform, posting on both Twitter and Trump's copycat service, Truth Social.

These Trump allies have expectations of the Tesla chief that go far beyond the reinstatement of the former president — including allowing back other banned users and removing regulations on hate speech. But will they be disappointed?

Trump weighed in on Friday morning. "I am very happy that Twitter is now in sane hands," he said. What he didn't say whether he'd rejoin the platform if Musk offers to let him back on. In the past, Trump has said he won't return. but many are skeptical he'd actually be able to stay away if offered.

For now, nobody knows what Musk will do with Twitter. He immediately fired top executives, including the policy chief who is most directly associated with banning Trump. But he has offered few specifics on how he will reshape the site and its approach to politics.

On Friday morning, he did say he would be looking at claims of so-called shadow-banning — blocking a user's content without their knowledge — from a conservative account named @catturd2. 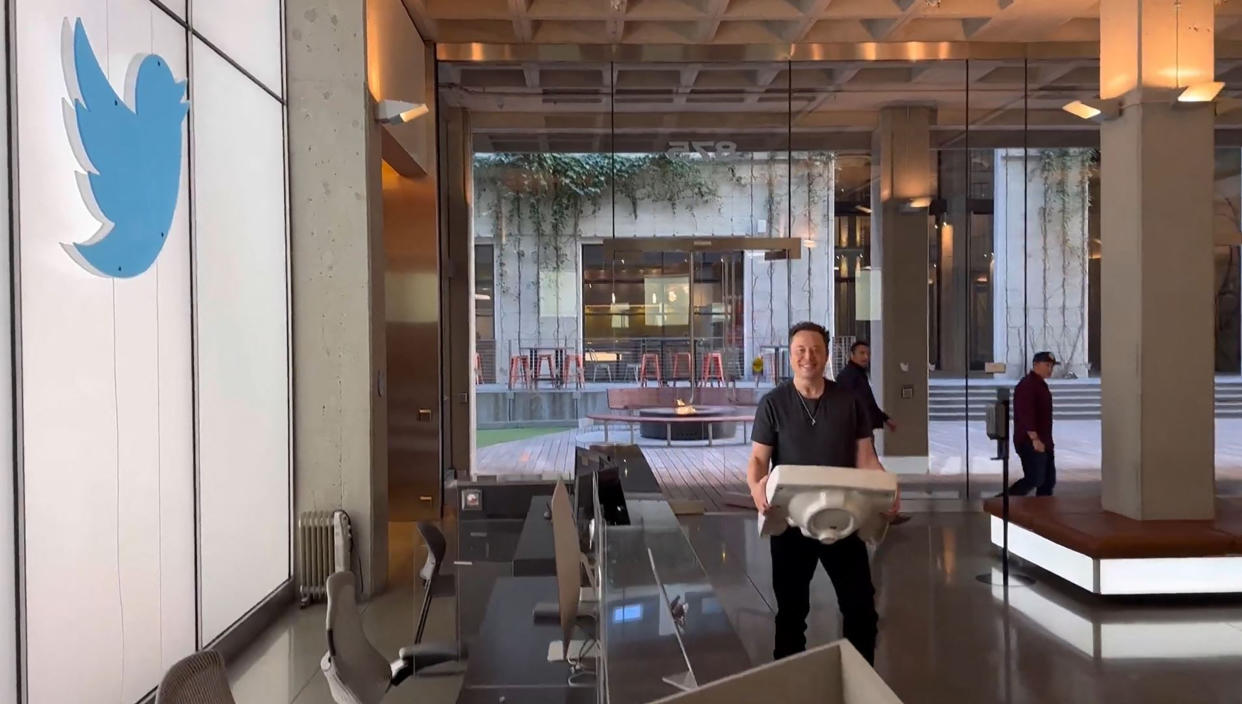 One hint from the billionaire came in an open letter he sent to advertisers Thursday morning acknowledging that he'll have some limits on how much he will loosen the platform's rules regarding hate speech and misinformation. This contrasted with previous comments when the billionaire called himself a “free speech absolutist.”

“Twitter obviously cannot become a free-for-all hellscape, where anything can be said with no consequences,” he wrote.

Carnegie Mellon University Professor Ari Lightman, in a Yahoo Finance live video before the deal closed, argued that a platform can be both open and heavily moderated. "Both can exist to some capacity," he argued.

However, it remains to be seen whether Musk can appease both Trump allies and other stakeholders, notably advertisers.

In spite of all the open questions, phrases like “Go Elon” were trending Friday morning with a seemingly endless stream of mostly right-wing figures celebrating the billionaire's acquisition.

But the messages pointed towards many thorny issues Musk will have to confront in the days ahead. For example, right wing activists immediately put together lists of figures they say need to be reinstated.

Musk is widely expected to reverse the lifetime ban for Donald Trump, perhaps even before the midterm elections on Nov. 8. He's also reportedly looking at other lifetime bans, but it's unclear how far he’ll go. Will he reinstate Alex Jones, who was recently ordered by a court to pay nearly $1 billion for his lies about Sandy Hook, and let him tweet freely? How about other controversial and legally problematic figures such as GOP lobbyist Roger Stone, MyPillow Guy CEO and election denier Mike Lindell, or far-right activist James O’Keefe?

On Friday, @KanyeWest appeared to be available after being locked locked out earlier this month following antisemitic comments from the artist, who now goes by Ye.

And the calls from the right go beyond reinstating accounts. Rep. Lauren Boebert (R-CO) took to Twitter Friday to promise:"A lot of suppressed truths, on social media and in Congress, will be coming to light in the next two years." Meanwhile, Dinesh D'Souza, a key Trump ally and propagator of his 2020 election falsehoods, said Thursday night: “Now Elon Musk can reveal the explosive details” of Twitter’s role around Hunter Biden.

For many on the right, Twitter’s decision to block users from posting a story about Hunter Biden’s stolen laptop less than three weeks before the 2020 election qualified as election interference. The Federal Election Commission has reportedly dismissed those allegations, but many on the right want to keep the case alive. What's unclear is whether Musk would be inclined to wade in.

Other tweets suggested that Twitter record government requests for content from government officials. There were also calls from more firings, with Rep. Marjorie Taylor-Greene (R-GA) tweeting “just wait until tomorrow” on Thursday night, in an apparent reference to the fired Twitter executives. Musk has reportedly told Twitter employees he’s not planning to fire 75% of the staff. However, further layoffs and restructuring at the company are widely expected.

That’s something all freedom-loving people can get behind.

For now, all sides of the political spectrum will await next moves from the unpredictable billionaire who has deepened his ties to the GOP in recent months.

On Friday morning, Musk dropped a hint of his mood in the aftermath of the sale, tweeting: "Let the good times roll."

Ben Werschkul is a Washington correspondent for Yahoo Finance.