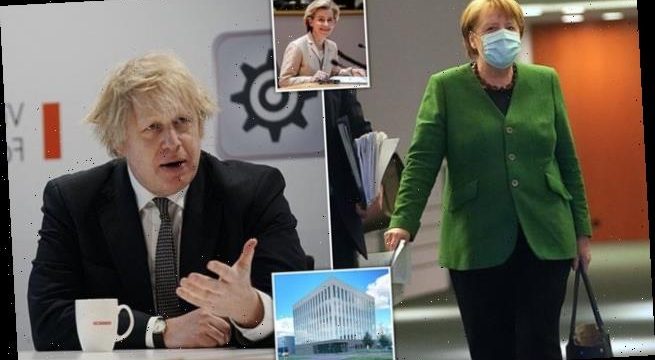 The Chancellor came out in favour of an EU-first policy and the threat of a ban on exports to third countries like Britain that has been advocated by European Commission president Ursula von der Leyen – her former defence minister.

A French minister also explicitly warned exports of the jab to Britain could be halted unless more were supplied to EU nations.

The hardline approach of some EU states –  which has been attacked as ‘vaccine nationalism – has created a schism in the block, as other countries warning it would be disastrous.

Tensions are surging as world leaders argue over millions of doses of the Oxford jab that are reportedly being stored in a factory in the Netherlands.

Neither the EU nor UK has an obvious claim to the stockpile but both want a slice of it. Boris Johnson is allegedly considering an offer to split the stash with the EU to avoid a blockade.

Mrs Merkel this morning said: ‘I support Commission President Ursula von der Leyen. We have a problem with AstraZeneca.’

And one of her ministers also deepened the ongoing row with an attack on the Anglo-Swedish firm.

‘For us, it is very, very important that everyone lives up to their responsibilities,’ Europe minister Michael Roth said this morning.

‘Everyone has to stick to their commitments, this is clearly also true for companies that have promised the delivery of vaccine contingents.’

The row appears to be revolving around vaccine supplies being made at a factory in Leiden, Netherlands. Neither the UK nor EU is currently using the vaccine the plant is making but Britain has ruffled feathers by importing some to add to stocks being made in its own factories at a time when the EU claims AstraZeneca is under-delivering in Europe.

Although the UK is miles ahead in its vaccination programme, officials are still worried about the disruption an EU ban would cause. A source in Whitehall told The Times ‘we’re very worried about it’.

In a sign of how far Europe is behind the UK, France announced today that the age from which people can be vaccinated against Covid-19 virus would be lowered to 70 from 75 from Saturday.

French Europe Minister Clement Beaune directly threatened exports to the UK today, telling France Info radio: ‘AstraZeneca says ”I am experiencing delays”, we say ”mobilise your plants for us and if you don’t, we will block exports to the UK”. 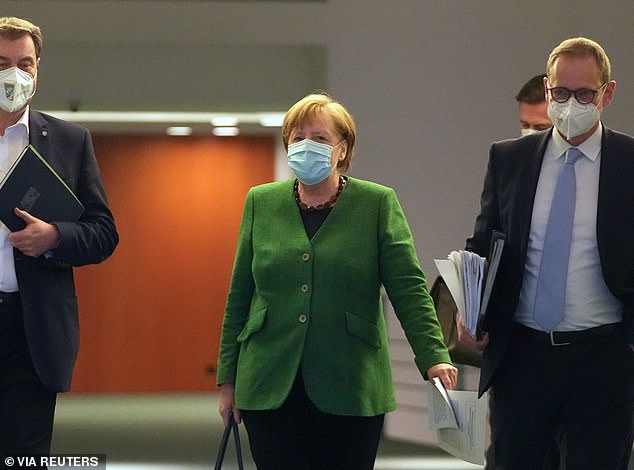 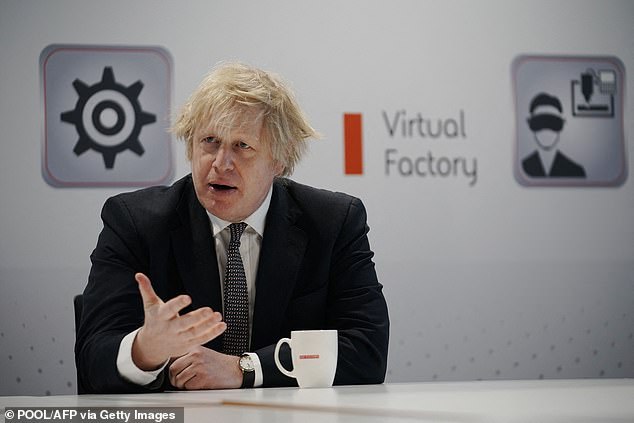 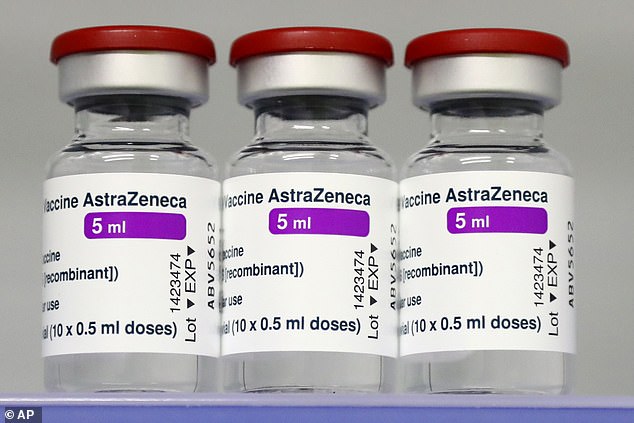 Britain makes enough of the AstraZeneca vaccine in the UK to be self-sufficient but jumped at the opportunity to buy extra stocks from a factory in the Netherlands, which has angered politicians in Europe, where deliveries of the AZ jab have been smaller than expected

Germany is going back into lockdown over Easter with Angela Merkel warning ‘we are in a new pandemic’ as mutant Covid strains cause cases to spike, with France seeing infections double in a week.

Europe’s coronavirus third wave, which has been gathering pace for weeks now, has reached crisis point over the last few days with leaders across the continent forced to reimpose strict measures to keep cases down.

Mrs Merkel announced last night that all non-essential shops in Germany will be closed over the Easter period with church services moved online and public gatherings banned as infections rise ‘exponentially’.

Meanwhile the head of France’s hospital federation warned that case figures are ‘exploding’ in his country and the health system is heading for an ‘unprecedented violent shock’ in about three weeks unless strong action is taken.

In Spain, experts have begun warning of a fourth wave of Covid after deaths from the virus rose to 633 on Monday compared to 298 a week ago. The country is currently under a nationwide curfew and while exact measures vary from region to region, most have imposed curbs on movement, gatherings, and closed some businesses.

Covid cases and deaths also remain high in Italy where new lockdown measures were imposed across much of the country last week, although infection data has begun trending downwards since then.

Mrs Merkel last night pointed to the so-called Kent variant of coronavirus as being responsible, saying: ‘Essentially, we have a new virus… it is much deadlier, much more infectious and infectious for much longer.’

Merkel’s comment comes as European leaders are divided over whether to press ahead with an extraordinary ban on vaccine exports to Britain.

Brussels sources confirmed that the EU is ready to block a shipment of the AstraZeneca vaccine to the UK from a plant in the Netherlands.

But the issue has triggered a major rift among leaders of member states ahead of a key summit on Thursday.

One senior EU official described internal talks on the issue as a ‘total s*** show’.

Boris Johnson has launched a diplomatic offensive in recent days in a bid to head off a ban which could delay the UK’s vaccine programme.

The PM has sent his senior adviser Lord Lister to India for talks on unblocking a shipment of five million doses of the AstraZeneca vaccine delayed last week on orders of the New Delhi government.

Government sources confirmed that the Prime Minister held private talks with Angela Merkel and Emmanuel Macron on Sunday in a bid to defuse the row.

But he appears to have failed as both have come out in favour of the ban if Europe can’t negotiate a better supply deal with AstraZeneca.

Mr Johnson played down the threat yesterday, saying he was ‘reassured by talking to EU partners over the last few months that they don’t want to see blockades’.

However, some ministers are alarmed by the protectionist rhetoric emerging from the EU and fear Brussels will press ahead with the ban in a bid to distract attention from the dismal performance of its own vaccine rollout.

One insider said: ‘It is madness, but for some politicians it is easier to have a row with AstraZeneca and Britain than to have people focusing on the contracts they didn’t get.’

Mrs von der Leyen warned last week she was ready to block vaccine exports to the UK as part of a ‘Europe first’ agenda designed to ensure that AstraZeneca and other drug firms meet their commitments to the bloc before supplying others.

A spokesman for Mrs Merkel said factories in EU countries had exported 34million doses to 30 countries, but that those in Britain and the US had shipped ‘almost nothing’. During a phone call on Sunday she told Mr Johnson that Mrs von der Leyen was right to be considering ways to further restrict shipments.

But a string of other EU countries are alarmed by the idea of blocking exports, amid fears it could do serious international damage to its reputation as a place to do business. Irish Taoiseach Micheal Martin warned that a ban would be ‘a very retrograde step’ which would prove counter-productive.

Mr Martin, who could face the prospect of the EU imposing a hard border with Northern Ireland to prevent vaccines entering the UK, said he had made it ‘very clear’ to fellow leaders he was opposed.

‘They’re not EU vaccines,’ he said. ‘These are vaccines paid for by other countries that are manufactured in Europe.’

The Netherlands also opposes the jab ban, with Dutch PM Mark Rutte pushing for emergency talks between Mr Johnson, Mrs von der Leyen and AstraZeneca to thrash out a compromise.

UK COULD RETALIATE BY BLOCKING EXPORTS FROM YORKSHIRE FACTORY

A British chemicals maker could disrupt the EU supply of Pfizer jabs if the bloc tries to bring in an export ban.

Croda International, based in Snaith, East Yorkshire, makes key ingredients for the fatty droplet used to deliver the genetic code within the vaccine into the body.

This has reportedly allowed Pfizer to warn EU leaders that production at its main factory in Belgium could ‘grind to a halt’ within weeks if the UK stopped Croda deliveries from crossing the Channel.

Croda, better known for making ingredients in shampoo and sun cream, has a five-year deal with Pfizer which it has said will boost sales by at least £90million this year.

The contract means there could be an option to fight back if the EU does stop vaccine exports to the UK.

A spokesman for Croda, which does not make the vaccine ingredients in Snaith but elsewhere in the UK, said the company ‘is supplying lipid components manufactured in the UK and the US to multiple Pfizer facilities’.

EU sources yesterday suggested the first action against the UK was likely to be a block on the export of AstraZeneca vaccines from the Halix plant in the Netherlands.

The Dutch plan would see No 10 agree to free up some production capacity at the plant, which currently supplies only Britain, to make jabs for Europe as well.

Belgium also opposes the ban, fearing it could hamper supply chains worldwide. The Pfizer jab is produced there.

UK sources played down the idea of a compromise that would allow the sharing of vaccines produced at the Halix plant. A source said there had been ‘no indication of that’. Health sources insisted that the bulk of the Britain’s AstraZeneca supplies are manufactured in the UK.

The PM’s spokesman said: ‘We have said throughout the vaccination programme that supplies will fluctuate, but we remain confident in our supplies.’

Whitehall sources played down this estimate but confirmed ministers had been warned a ban by the EU could hit supplies during May and June.

Vaccine supplies are already due to dip next month because of the delay to the shipment from India.

Downing Street said the vaccine rollout had to remain an ‘international effort’.

The PM’s spokesman told reporters Britain expects the EU to continue to stand by its commitment, adding: ‘It’s important that the whole world works together.’