Record rainfall in Europe caused severe flooding in Germany that has reportedly killed 42 people, with dozens more still missing as the region struggles to handle the disaster.

The rainfall caused major rivers to burst their banks and flood the surrounding regions: Flood waters have washed away buildings and cars in some cases.

In addition to the confirmed dead, between 50 and 70 people are missing, according to German newspaper BILD. 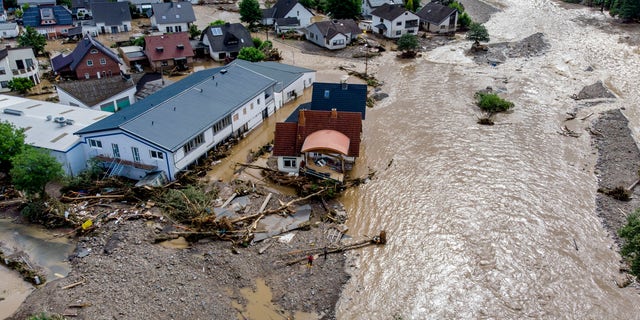 Damaged houses at the Ahr river in Insul, western Germany, Thursday, July 15, 2021. Due to heavy rainfall the Ahr river dramatically went over the banks the evening before. People have died and dozens of people are missing in Germany after heavy flooding turned streams and streets into raging torrents, sweeping away cars and causing some buildings to collapse. (AP Photo/Michael Probst)

“There are dead, missing and many people in danger,” said Malu Dreyer, chief of Germany’s Rhineland-Palatinate state, which has seen perhaps the worst of the flooding. “All of our emergency services are in action around the clock and risking their own lives.”

Chancellor Angela Merkel said she was “shocked” by the severity of the flooding.

“My sympathy goes to the relatives of the dead and missing,” she said ahead of a meeting with President Biden. 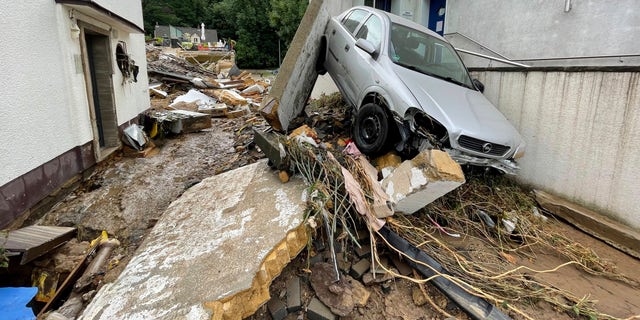 A street is covered with debris in Bad Muenstereifel, Germany, Thursday, July 15, 2021, after heavy rainfall and the flooding of the Erft river. People have died and dozens of people are missing in Germany after heavy flooding turned streams and streets into raging torrents, sweeping away cars and causing some buildings to collapse. (B&amp;amp;S/dpa via AP)

Police and military have mobilized to help stranded residents, many of whom wait on their rooftops for rescue. Police have deployed inflatable boats and helicopters to assist in rescue operations.

Neighboring Belgium and the Netherlands have suffered as well: A Belgian report said four people have died, and many homes in Holland have suffered damage as residents evacuated, the BBC reported.

The mayor of Liege, Belgium’s third-largest city, urged residents to evacuate, and those unable to do so should move to the upper floors of their buildings.

Armin Laschet, the premier of North Rhine-Westphalia, blamed the disaster on global warming, warning that the country can expect “such events over and over.”