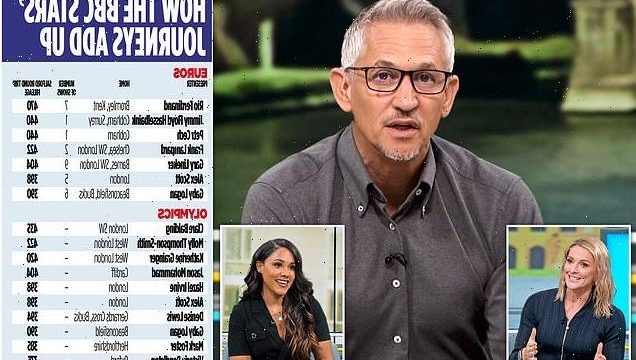 Gary Lineker travels more than 3,600 miles covering Euro 2020 for BBC Sport… without ever leaving Britain (and YOU pick up some of the tab)

Gary Lineker racked up more than 3,600 miles covering the Euro 2020 football tournament – without ever leaving the UK.

The BBC’s highest-paid star made nine 404-mile round trips between his London home and a studio in Salford, Greater Manchester, to front live coverage of matches.

Many of his journeys – and those of his fellow pundits – will have been funded by the licence-payer, which also covered hotel stays and the cost of hiring a high-tech studio. 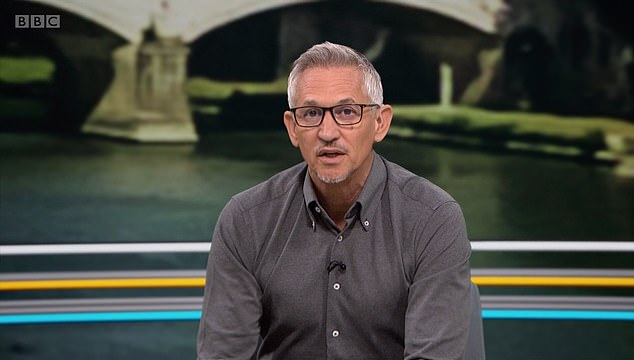 The BBC’s highest-paid star Gary Lineker made nine 404-mile round trips between his London home and a studio in Salford, Greater Manchester, to front live coverage of matches

It is the latest example of the extra costs involved in the controversial decision to relocate the Corporation’s sport department to the North of England.

Concerns have also been raised that the move affected the quality of programmes, as some potential London-based interviewees have been put off by the long journey.

Lineker, who was paid £1.36 million in the last year, would only have travelled 108 miles had the coverage come from a London studio. Nor is he the only presenter to have racked up the miles in covering the Euros.

Gabby Logan made six round trips of 390 miles from her home in Beaconsfield, Buckinghamshire, and Rio Ferdinand made seven 470-mile journeys from his home near Bromley, Kent. Alex Scott went to Salford five times from her London home. 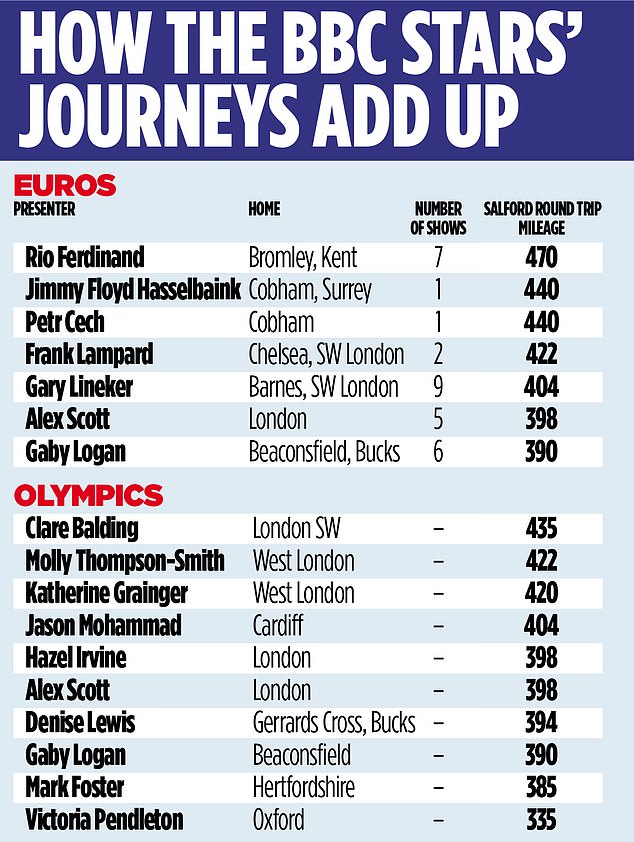 Several other on-screen experts also made long trips to Salford’s MediaCity, including former German striker Jurgen Klinsmann being flown in from California and Spanish midfielder Cesc Fabregas travelling from Monaco.

BBC rules state that any work-related travel between 10pm and 6am is paid for out of the licence fund. So that would include flights and taxis for Euro 2020 presenters covering the evening matches. Other journeys to studios should be paid by the presenter, although sources inside the BBC suggest that doesn’t always happen.

In addition to its travel and accommodation outlay, thousands of pounds were spent on hiring Dock 10 studio in Salford, which is owned by private company Peel Media.

A BBC spokesman said all travel and accommodation costs for Euro 2020 presenters and pundits were in line with its policy. 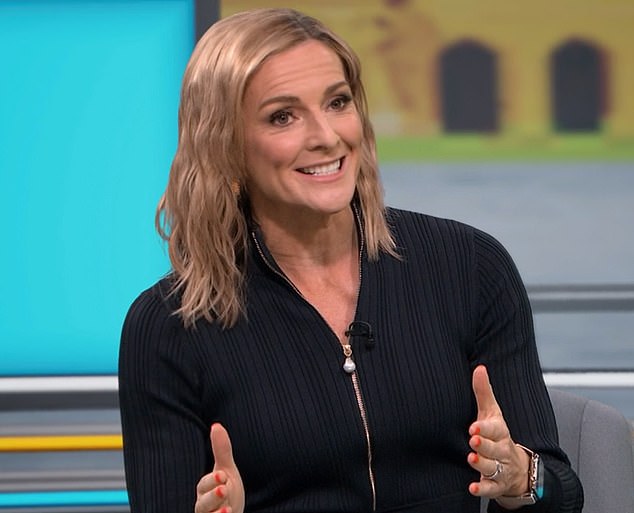 Gabby Logan made six round trips of 390 miles from her home in Beaconsfield, Buckinghamshire

When BBC Sport – along with Radio 5 Live, BBC Breakfast, children’s programming and BBC Learning – moved to a new Salford Quays headquarters in 2011, the total cost of the move was put at £942 million.

The plan was intended to make the Corporation less ‘London-centric’– although critics have said the move was an empty gesture, with many key stars and executives remaining in Southern England and commuting when needs be – as the Euros coverage demonstrated. Presenter Mark Chapman and former Wales international Mark Hughes were two of a small number of contributors who live closer to Salford than London.

Coverage of the Olympics, which kick off on Friday, will follow a similar pattern.

While Dan Walker, who lives in Sheffield, and Sam Quek, from The Wirral, will anchor the breakfast slot, Clare Balding, Gabby Logan, Alex Scott, Hazel Irvine and Jason Mohammad will all have round-trips of more than 390 miles. 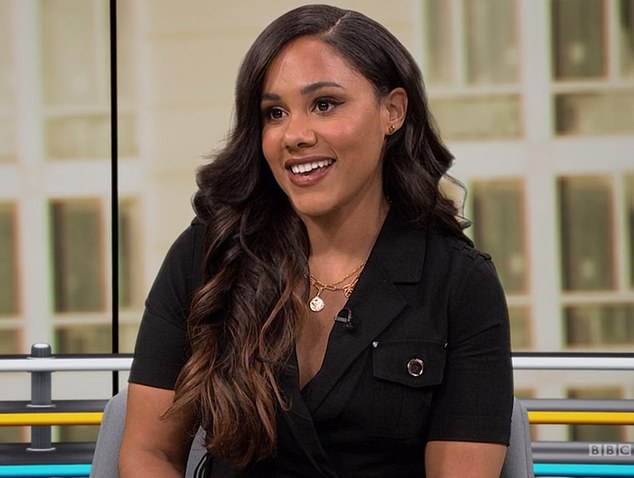 It is understood that presenters will be put up in hotels, the cost of which, under staff rules, should be capped at £90 per night.

If accommodation is kept to that figure, the hotel bills, funded by licence-fee payers, for five presenters for five nights a week over four weeks would be more than £10,000. However, the cost will be considerably less than sending a big team to Tokyo, which the BBC would have done had there not been a pandemic.

The BBC decided to move programmes to Salford to try to make it more ‘devolved’, ‘diverse’ and ‘democratic’. However, even the BBC-friendly Guardian newspaper described the move as ‘politically correct, but practically duff’ and Jeremy Clarkson said it was ‘box-ticking’, adding that Salford was a ‘small suburb with little to offer beyond a Starbucks and a canal with ducks on it’.