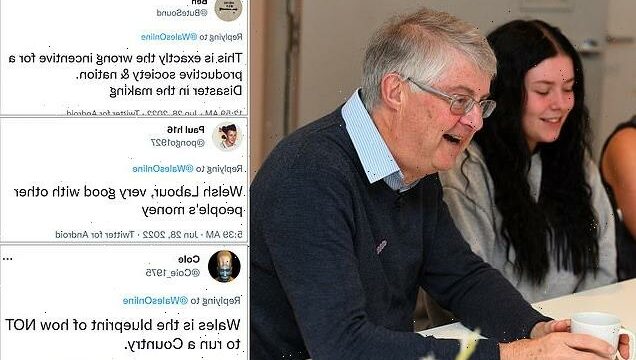 Fury as Labour-run Welsh Government presses ahead with ‘waste of public money’ £20m basic income pilot handing teenagers £1,600-a-MONTH to do NOTHING – despite similar ‘free money’ schemes being ditched

Mark Drakeford’s Labour-run Welsh Government has been accused of handing out ‘free money’ today as it presses ahead with its ‘radical’ £20million basic income scheme pilot that will offer hundreds of teenagers £1,600 monthly handouts without needing to work.

Welsh Labour will hand out payments to 18-year-olds leaving the care system amounting to a salary of nearly £20,000 before tax for two years in a pilot scheme from this Friday.

More than 500 people will be able to apply to the three-year programme, where the money is put in their bank accounts with no demands on what they do to earn it or how it is spent.

But critics have today blasted Mr Drakeford’s scheme, calling the project ‘free money’ which offers no long-term solutions, and pointed out that similar schemes in other countries have either failed to get more people into jobs or have met with only limited success.

Others accused Welsh Labour of ‘being good with other people’s money’ and said that the Labour administration will now have to impose more taxes to fund the £20million programme.

Joel James, shadow minister for social partnership, said: ‘It’s been proven time and again that so-called Universal Basic Income doesn’t work. Look at Finland, who ditched their scheme after two years in favour of a new scheme that encouraged people to actually take up employment or training.

‘We recognise that this is a vulnerable group and they need extra support, but this is completely the wrong way to go about it and could well create more problems than it solves. It’s typical Labour, but it’s obvious that giving out free money won’t be a quick fix.’ 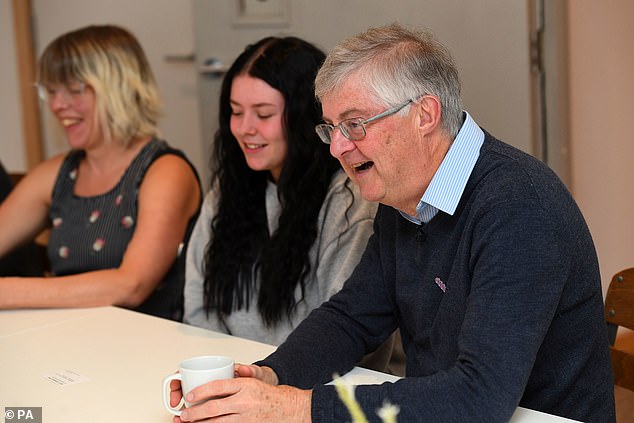 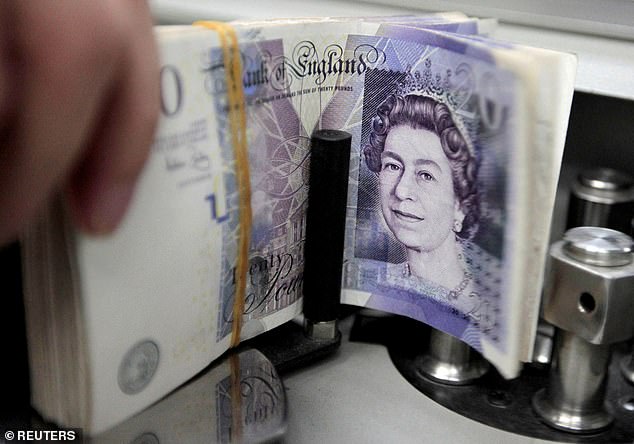 In what is one of the most generous schemes of its type in the world, young adults leaving the care system will be eligible for the payments for two years.

Twitter users blasted Mark Drakeford’s pilot as they questioned: ‘How is this being paid for?’

Basic income schemes have tried around the world for decades, but success usually depends on what is being measured.

Many schemes, including those in Finland and Spain, he recorded a boost in happiness and a fall in stress when people are handed free money.

But critics point to the schemes often having little or no impact on improving employment despite millions of pounds spent.

Here are some of the schemes and how they panned out.

A 2017-2018 experiment saw 2,000 unemployed people given a €560 (£490) basic income every month in a two-year trial. At the end they were ‘more satisfied with their lives and experienced less mental strain, depression, sadness and loneliness’. But they also worked for only six more days over a one-year period.

The B-Mincome programme handed 1,000 households in Barcelona 1,675 euros (£1,405) a month in 2017, with some having to do nothing to earn it and others having to take part in social programmes to earn it.  It similarly had little effect on employment, but did make people happier and less stressed.

The hardline regime introduced a nationwide programme in 2011 as it phased out subsidies on bread, water, utilities and fuel. A study found it ‘did not affect labor (sic) supply in any appreciable way’ and was later reduced.

The charity GiveDirectly has given more than 10,000 families $1,000 dollars in three payments spread across three months. It provided a short-term stimulus to the local economy and improved the lives of those who got it, but the effects compared to areas where no money was handed out was negligible.

A Unicef-funded programme gave $2.80 a month to 6,000 people in the state of Madhya Pradesh in 2011 and 2012.  It improved sanitation, nutrition and school attendance.

The state of Alaska has given citizens an annual payout as a dividend from oil industry revenues since 1982.  It can vary between $1,000 and $2,000 based on the oil price at the time. A study found  ‘the dividend had no effect on employment’ but has created a surge in the birth rate.

The Welsh First Minister said: ‘We want all our young people to have the best possible chance in life and fulfil their full potential.

‘The state is the guardian of people leaving care and so has a real obligation to support them as they start their adult life. Our focus will be on opening up their world to all its possibilities and create an independence from services as their lives develop.

‘Many of those involved in this pilot don’t have the support lots of people – myself included – have been lucky enough to enjoy as we started out on our path to adulthood.

‘Our radical initiative will not only improve the lives of those taking part in the pilot but will reap rewards for the rest of Welsh society. If we succeed in what we are attempting today this will be just the first step in what could be a journey that benefits generations to come.’

Minister for Social Justice Jane Hutt added: ‘We’re in the midst of a cost-of-living crisis like no other and we therefore need new ways of supporting people who are most in need. Our Basic Income pilot is an incredibly exciting project giving financial stability to a generation of young people.

‘Too many people leaving care face huge barriers to achieving their hopes and ambitions – such as problems with getting a safe and stable home, to securing a job and building a fulfilling career. This scheme will help people live a life free of such barriers and limitations.

‘We will carefully evaluate the lessons learnt from the pilot. Listening to everyone who takes part will be crucial in determining the success of this globally ambitious project.

‘We will examine whether Basic Income is an efficient way to support society’s most vulnerable and not only benefit the individual, but wider society too.’

It will run for three years with each person taking part receiving the basic income payment for 24 months from the month after their 18th birthday. And participants can choose whether to receive the money monthly or fortnightly.

Advocates of a so-called universal basic income argue that it cuts bureaucracy and say that people will be more willing to take on temporary or part-time work if their benefits will not be cut as a result.

However, previous schemes have questioned their value. An experiment with ‘free money’ in Finland made people happier but did not improve employment levels and would be ‘unsustainable’.

A 2017-2018 experiment saw 2,000 unemployed people given a €560 (£490) basic income every month in a two-year trial to see whether the system would work better than traditional benefits.

Participants in the Finnish study ‘were more satisfied with their lives and experienced less mental strain, depression, sadness and loneliness,’ researchers said.

But the Finnish study found that the handout led to people being employed for only six more days over a one-year period.

A similar scheme in Spain yielded similar results. The B-Mincome programme handed 1,000 households in Barcelona 1,675 euros (£1,405) a month in 2017, with some having to do nothing to earn it and others having to take part in social programmes to earn it.

It similarly had little effect on employment, but did make people happier and less stressed.

In 2020, German researchers launched a programme that sees a group of people £1,080 per month. The study sees 120 people handed the cash with no means testing or limits on how it is spent, then monitored to see how their attitudes and behaviours change. 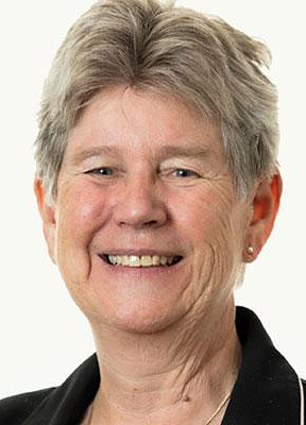 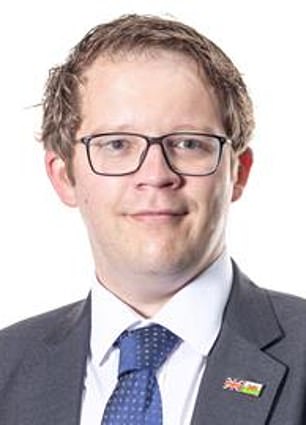 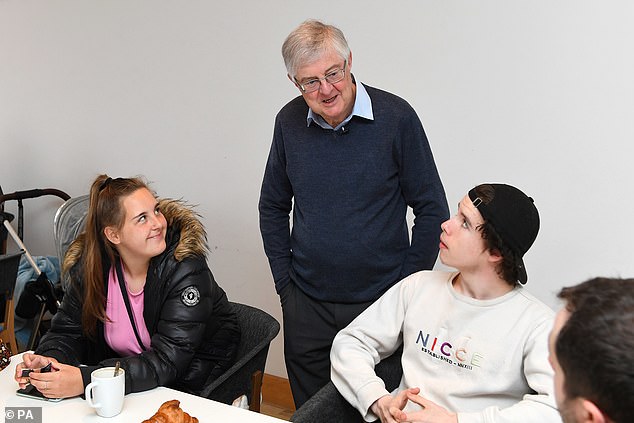 Another group of 1,380 people will not be given any money but will still have their attitudes and behaviours monitored, to see how they compare.

The experiment, which is being funded by an economic institute called My Basic Income using donations, runs until 2023.

UBI was among the ideas considered by Boris Johnson when working out how to deal with the economic impact of the Covid pandemic. But it was eventually rejected in favour of the furlough scheme and other work programmes.

A DWP spokesman said: ‘We recognise how important it is to support care leavers and already provide a specific, comprehensive package of support and protections for those of them in need, including changing regulations last year to provide additional support with housing costs for those under 26.

‘As we have advised the Welsh Government, Universal Credit is a means tested benefit and income such as money from this pilot is factored into any benefit payments. The UK Government will continue to support care leavers and other vulnerable people through targeted measures that prioritise those most in need of support.’