Thousands say sorry, but not PM

One year after the stolen generations report, politicians continue to argue over whether to say sorry.

Canberra – The Prime Minister yesterday stood firm in his refusal to make a formal national apology to the Aboriginal “stolen generations”, as thousands of Australians attended Sorry Day ceremonies around the country. 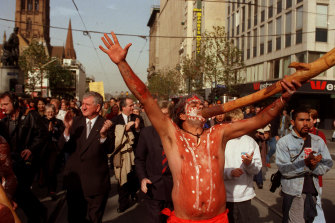 State and federal MPs, academics, students, church groups and others apologised for the practice of removing Aboriginal children from their parents.

In a conciliatory gesture, the Federal Government said donations to the Stole Children’s Support Fund would be tax deductible. It also pledged to continue tackling the problems of disadvantaged Aborigines by offering practical solutions.

But divisions within coalition ranks about how to respond to the landmark “stolen children” report were evident. While the Victorian Premier, Mr Jeff Kennett, offered a formal apology, the Prime Minister, Mr John Howard, continued his refusal to apologise on behalf of the Government.

The Federal Aboriginal Affairs Minister, Senator John Herron, also said it was illogical for every Australian to say sorry when 40 per cent were not first-generation Australians.

Yesterday was the first anniversary of the release of the report on the inquiry into the separation of Aboriginal and Torres Strait islander children from their families.

The author of the report, former Human Rights and Equal Opportunity Commission president Sir Ronald Wilson, said he was disappointed at Mr Howard’s failure to bring state leaders together and put the report’s recommendations into place.

At an Honor in Grief Ceremony in Parliament House, Canberra, hundreds of people stood still as a woman recreated the piercing wail of a mother who had lost her child.

Nearby in the House of Representatives, Mr Howard said personal apologies were the right of individuals and he felt sorrow and regret for past injustices.“(But) it is the view of my Government that a formal national apology of the type sought by others is not appropriate.”

Mr Howard said the handling of the issue by the Opposition had amounted “in eyes of many Australians, to manipulation for party political purposes.”

The Opposition Leader, Mr Kim Beazley, said an apology from Mr Howard now would not he heartfelt.

He said it was not “about guilt or apportionment of blame” but an honest appraisal of how Australia’s history had to illuminate and guide future policies.

“I have given up trying to get an apology out of the Prime Minister on these matters, it is not possible to get it,” he said. “In one sense, If you do not actually mean an apology it is not worth making.”

The Federal Opposition failed to get cross-party support for a motion aiming to record MPs “concern for the policies enforced by earlier Governments that separated Aboriginal children from their parents.”

The Government amended the motion, making no reference to the policies but saying the Government would address the profound disadvantage of Aboriginal people.

The Aboriginal and Torres Strait Islander Commissioner chairman, Mr Gatjil Djerrkura, said the stolen generations report had opened one of the darkest chapters of Australian history and that hundreds of thousands of people had since reacted with humanity.

In Melbourne, the Reverend David Conolly, a member of the Anglican committee for Aboriginal matters, told an ecumenical service in St Paul’s Cathedral that the Sorry Day was “a day on which every Australian eye should brim with tears”.

At Melbourne Town Hall, the Lord Mayor, Cr Ivan Deveson, rejected suggestions that the day would be part of a “guilt industry.”

“This is not about admitting guilt or apportioning blame,” he said. “As individuals we are clearly not involved in stolen generation policies. This, however, does not stop us from expressing sincere sorry for the injustices of the past.”

In Sydney, books containing an estimated 500,000 signatures were presented to Aborigines.