Edward Joseph Leonski, 24 years, a private in the United States army, was hanged in Pentridge prison at 6 am yesterday. He had been convicted before a United States military court-martial on July 17, and sentenced to death for the murder of Mrs Ivy McLeod, Mrs Pauline Thompson and Miss Gladys Hosking. The three murders were committed between May 3 and May 18. 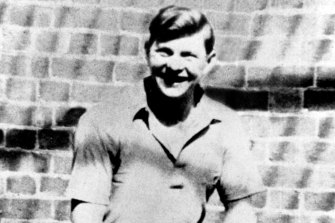 The long delay between sentence and execution was occasioned by the necessity to secure the approval of the court-martial sentence from Washington before execution.

This was the first occasion in the history of the Victorian criminal law that a prisoner condemned by a foreign tribunal has been executed in one of the goals of this State.

Spiritual consolation was given by a priest, who visited Leonski prior to his execution.

LEONSKI GUILTY ON ALL CHARGES

Leonski did not give evidence on his own behalf, but evidence for the defence was called to show the peculiarities of the accused when under the influence of liquor, and that he was not responsible for his actions. His senior counsel stressed the mental history of Leonski’s family.

Leonski was charged with having murdered Mrs Ivy Violet McLeod, 40 years, at Albert Park on May 3; Mrs Pauline Buchan Thompson, 31 years, at Spring Street, city, on May 9, and Miss Gladys Lillian Hosking, 40 years, on May 18. 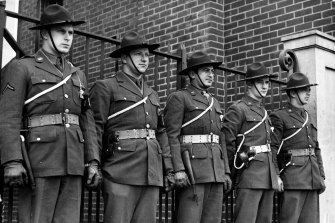 Counsel for the defence, in opening the case for the accused, said that in a case like this so much depended upon the mental state of the accused. This applied in two respects – his mental state in respect of the alleged confessions and his actual mental state if, in fact, the confessions were true. For that reasons the defence would produce evidence from Leonski’s officers to give a picture of what kind of a fellow he was. Evidence had already been tendered in the report of the examining doctors which formed the background for this. It set out that his father was alcoholic; that his mother had been confined to an asylum, and that his brother was so confined.

Accused’s general history gave a satisfactory picture up to the time that he entered the army. The picture which would be presented vary generally was that he was a good soldier when he joined the army, but he became increasingly a poor one. This happened at the time when he increasingly turned to the use of alcoholic liquor.

A captain of the United States army, who was the commanding officer of accused when he left the United States, and until March 31 last, said that Leonski was perpetually in trouble. It was nothing of a really serious nature, and seemed to be unintentional most of the time, but he was still in trouble. Leonski was proud of his strength, and demonstrated it to all he could. He drank very much more than the average soldier. In witness's opinion he was not able to resist liquor. After Leonski's arrival in Australia witness had occasion to sentence him for being absent without leave.

Counsel for Defence: Did you ever meet him in the city? Yes. In the latter part of February, about 1.30 am, a man told me there was an American soldier who appeared to be in trouble, that he was intoxicated and was in bad company. I went down and saw Leonski. At the time Leonski was absent without leave. I got a taxi and brought him back to camp. On the way hack Leonski started crying, and appeared to be very repentant. By the time we reached the camp he was completely broken down and was crying like a baby.

Witness said that when they got out of the taxi a woman hailed the taxi to go back to town. Leonski looked around at her, and said. "I think I will go back to town." Leonski commenced to walk over to the taxi, but witness called him back and put him under arrest. Although he did not think Leonski a very desirable sort of man, witness asked him on one occasion was there anything he could do for him. Leonski suggested that witness should place him in the guard house, because that was the only way he could keep out of trouble. Witness did so.

Counsel for Defence: Do you consider his actions were those of a normal American soldier?

Witness: Mentally I did not consider him perfectly sound. Not being an expert, I could not say that he was crazy. Several company commanders promoted him on different occasions, but he always got back to his old position.

A United States sergeant, who has known Leonski since March, 1941, told of a visit he made to Luna Park with Leonski. The accused had been drinking. At Luna Park he grabbed girls and tried to kiss them. He wanted thorn to say the word "prunes."

The Judge Advocate, in his address in the court, said that he had been told that a trial of this kind was unique in the history of the administration of Justice in this country. Undoubtedly the workings of the trial court-martial were unique. The people of the Commonwealth of Australia shared with the citizens of the United States the same basic concepts of justice. People of the two countries shared the same basic concepts of human life, the same fundamental beliefs and concepts on the value of human decency. They had the same abhorrence of crime, and particularly crimes of violence. He was sure that every citizen of the United States, military or civilian, who had heard anything concerning the tragedy with which the court had been concerned during the last few days, had a feeling of complete revolt and abhorrence.

He knew it was the desire of every member of their country that justice should be accomplished—justice to the country they represented and justice to these unfortunate victims. No crime was rational, and because they could not see the motive it did not form a reason for suggesting that the criminal was mad. The evidence showed that accused was callous, cold, hard, cunning and vicious. Even without confession, in his (counsel's) opinion the circumstances were sufficient to bring in verdict of guilty. But Leonski did confess, and his confession generally was in keeping with the evidence of witnesses for the Government.

Counsel for the defence, in his address, said the principles of justice throughout the English speaking world were alike, and one unchanged principle of criminal law was that a man should not be convicted of a crime unless he had been proved guilty beyond reasonable doubt, and that at all times he was covered with the presumption of innocence. Referring to the death of Mrs. McLeod, counsel said that with the exception of the confession, the only evidence against Leonski was that an American soldier was looking at the body after it was dead. As to the death of Mrs. Thompson, not one single witness identified Leonski as being the person who was with Mrs. Thompson drinking in the hotel on the night before the woman's death. The only fact, apart from the confession, connecting Leonski with the death of Miss Hocking was the mud on his clothes. There was a line of slit trenches along the area extending for three blocks, and the surface was a soapy mud. Anyone crossing to the camp at night was liable to slip in the mud, particularly if the man were drunk. Was there anything suspicious about a man who had fallen in the mud washing his clothes? If he were trying to conceal any guilt he would have taken care to wash the clay from his shoes, the bed, and his tent. He would have destroyed his trousers and underclothing, which had blood on them.

No court in any civilised country, he said, would convict a man on that evidence. In addition, of course, was the confession Leonski was alleged to have made to the American soldier. It seemed from his evidence that this soldier had never really made up his mind as to whether Leonski was telling the truth. In the three so-called confessions made by Leonski, and in his statements to the police, there was not a single detail given by Leonski that the police did not know already. The police told him what he had to confess in conformity with what they believed to be the facts. The police had a natural desire to clear up these mysteries. There was the pride of craftsmanship that they had solved the problems. If Leonski were found guilty, it must be on the strength of these confessions—upon the statements of a disordered mind.

The court, after deliberating for 20 minutes, resumed at 6.30 pm, and the chairman announced that it would receive evidence of previous convictions.

Judge Advocate announced that there were no court-martial convictions.

The court closed again, and resumed at 6.30 p.m. The chairman then asked Leonski to stand. Addressing him, the chairman said: "Private Leonski, it is my duty as president of this court to inform you that the court, in closed session, and upon secret written ballot, three-quarters of the members concurring finds you on all specifications guilty, and of the charges guilty. It Is my further duty to inform you that court again iIn session, and upon secret written ballot, all the members present, and with nil members concurring, sentences you to be hanged."

The president then ordered that the accused be led from the room, and the court adjourned.

Leonski remained calm, and showed no signs of emotion as he walked steadily from the court under guard.

Leonski was known as the Brownout Strangler, given Melbourne's wartime status of keeping low lighting.