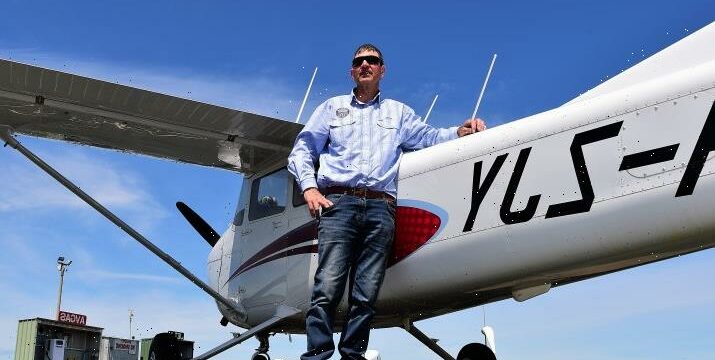 It is this light aircraft that will take an anxious husband stuck in Swan Hill by rising waters to the hospital bed of his wife, who is in Bendigo and due to give birth this week. The same aircraft will ferry doctors and nurses stranded in cut-off parts of the state back to their hospitals, homes and families. 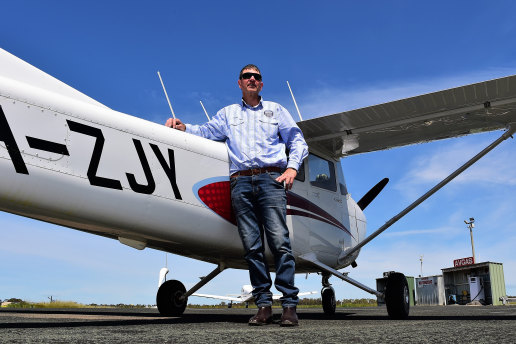 Farmer and pilot Peter McDonald has been rescuing people affected by the floods in his Cessna 172 Skyhawk and transporting them to safety.Credit:Steve Huntley/Riverine Herald

From above, the devastation wrought by the floods saturating northern Victoria is clear: We can see ruined crops and fencing, stranded livestock, and inundated homes, sheds and businesses.

But something else is clearly visible, too – the all-in community spirit that knots these towns together.

Even from the sky, you can see people rushing to sandbag buildings in nearby Echuca to brace against the predicted Murray River peak coming later this week.

Over the past week, hundreds of volunteers, including school students and their teachers, have joined in a momentous effort to create and distribute thousands of sandbags to protect homes and businesses, neighbours, and families. 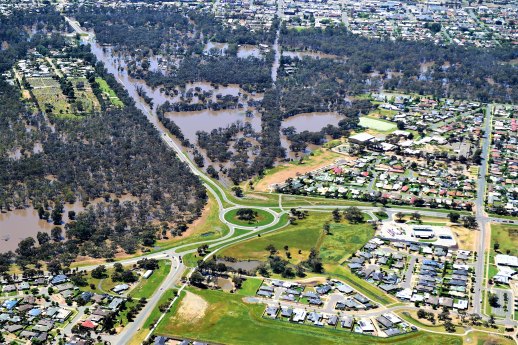 An aerial view of the partially flooded Northern Highway in Echuca.Credit:Steve Huntley/Riverine Herald

North-east of Echuca are the 66,000 hectares of the Barmah-Millewa National Park, the country’s largest red gum forest. From above, every visible gap between the trees glistens with water.

This forest, hugging the Victorian side of the border, is an enormous freshwater flood plain fed by an engorged Murray River. It is the Murray that now creates the largest headache for people in the Echuca region.

As the Campaspe slowly recedes, large volumes of water are flowing along the Goulburn from flooding in Shepparton and Mooroopna, and will feed into the mighty Murray.

VicEmergency warned on Monday that the Murray River could reach 95 metres AHD on Wednesday or Thursday, a level similar to the 1993 flood level of 94.77 metres. The Echuca wharf gauge is measured on AHD, which assumes the sea level is 0 metres.

Between last Wednesday and Monday morning, the SES responded to more than 6000 requests for assistance across the state. Of those, 664 were from people trapped in floodwaters.

An SES spokesman urged people not to drive through floodwater and said emergency warnings to evacuate were in place in Echuca and Echuca Village, Bunbartha, and Charlton. Warnings would be updated throughout the week, he said.

While they wait for the Murray to peak, locals here are working at breakneck speed to look after their own.

McDonald, who has an irrigation farm just north of the Koondrook-Perricoota state forest just over the border in NSW, will spend the next few days flying people to safety across Victoria – Kerang, Echuca, Bendigo, Swan Hill and Melbourne are on the list so far.

Having spent years farming rice and sheep and battling floods and droughts, McDonald resolved to diversify and completed his commercial flight exams in 2010. But he continued farming – and struggling against environmental challenges.

Like so many farmers, McDonald remembers family milestones through the natural disasters that punctuate the seasons.

“We don’t have averages in Australia; we just have extremes, and we go straight from this one into that one – whack. And in the middle, somewhere, there’s a bushfire,” he said.

When the floodwaters finally recede, the devastation will be widespread. In this region, it is grains – chiefly wheat, barley and canola – that are the hardest hit.

In the Goulburn Valley, it will be fruit, dairy and livestock.

“It’s impossible to fully understand the impact on food availability and prices at this early stage,” she said.

“What we do know is there will be significant impact and disruption coming through our supply chain in the coming months.”