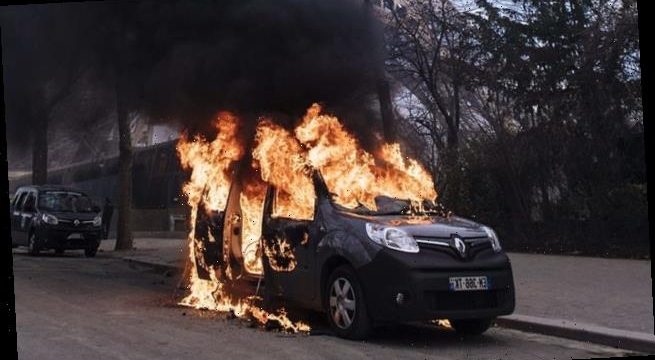 Sacré bleu! French are better at torching cars than giving Covid vaccinations as vandals burn 861 vehicles on New Year’s Eve – more than twice the number of people inoculated over the last five days of December 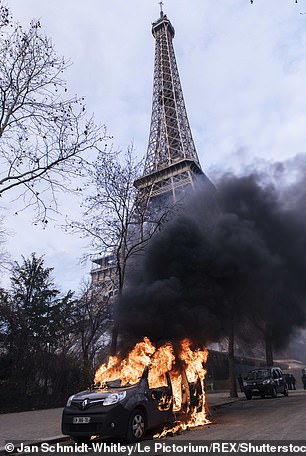 To the dismay of its citizens, France was lamentably slow over the New Year to roll out its Covid vaccination programme.

But the country continues to be bizarrely efficient at torching cars, which has become an annual tradition, with vandals burning 861 vehicles across France on December 31.

That figure is more than twice the number of people – 352 – inoculated between December 27 and 31. And it’s a startling statistic that hasn’t escaped the notice of President Emmanuel Macron’s critics.

Now the President is seeking to put some fire under the rollout in an attempt to catch up with other countries.

Much of the blame has been laid at the door of the EU, which was slow to pre-order vaccines.

But the French government has also faced criticism for the volume of red tape facing doctors.

For example, the first set of vaccines, which are restricted to elderly care-home residents, require a signed consent form and a doctor’s consultation before they can be administered. But Dr Eric Alamartine, from Saint-Etienne hospital in central France, was scathing about the bureaucracy. He told the BBC: ‘We’re dealing with a technocratic system which is not reactive enough.’

In his New Year’s address, Mr Macron said he would ‘not let an unjustified slowness take hold’.

He added: ‘Every French person who wants to must be able to get vaccinated.’ On Friday, Prime Minister Jean Castex admitted that France had lagged behind other countries but defended the decision to prioritise the most vulnerable. Mr Castex said that everyone over 75 will be able to have the coronavirus vaccine from January 18 as part of a new plan to speed up the process.

France recorded 19,814 new Covid cases on Friday, taking its total to almost 2.75 million since the pandemic began, and a total death toll of 67,431.

Britain, which declined the EU’s invitation to join its procurement programme last July, is independently able to authorise vaccines, which allowed it to start its roll-out much faster. 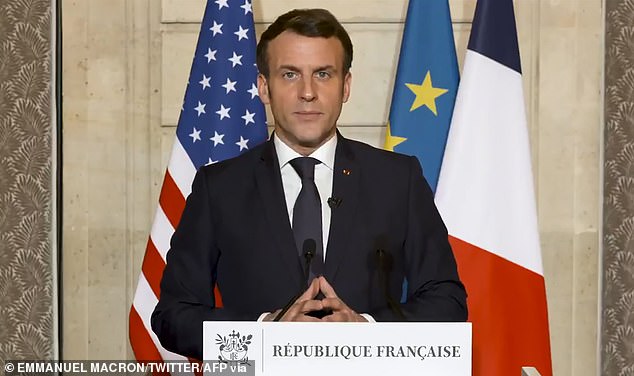 Now President Emmanuel Macron, pictured above, is seeking to put some fire under the rollout in an attempt to catch up with other countries

The French craze for setting cars ablaze on New Year’s Eve started in the 1990s, mainly as a form of protest. However, it grew in popularity after the 2005 riots in the suburbs of Paris and elsewhere, and has since become an annual event.

Meanwhile, in Germany, national pride that it was German scientists who developed the first effective Covid jab has been tempered by public anger that some of the hundreds of specially prepared vaccine centres are still not in use.

Chancellor Angela Merkel has been accused of failing to secure enough doses.