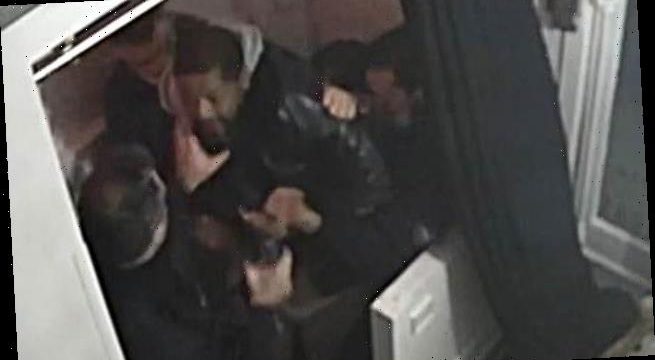 Four police officers have been charged after allegedly beating up and racially abusing a black music producer in Paris.

Footage of last week’s attack against Michel Zecler has gone viral in France, sparking a wave of protests and renewed anti-police sentiment.

Critics have accused the force of institutionalised racism and targeting black and Arabic people, and the incident has added to the controversy surrounding a new security law. 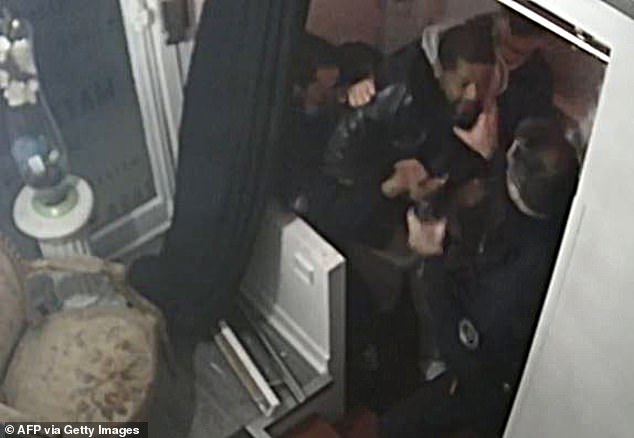 Tens of thousands protested on Saturday against the security bill, which would restrict the right to publish images of on-duty police. The rally in Paris ended in bitter clashes.

Two were kept behind bars, while the other two were put on conditional release, the source added.

On Sunday Paris prosecutor Remy Heitz had called for the officers to be charged specifically with using racial abuse. 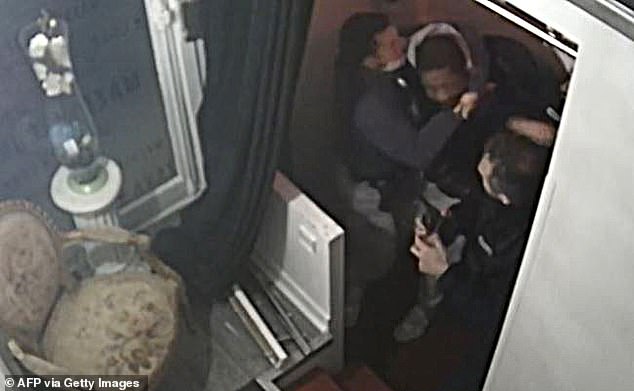 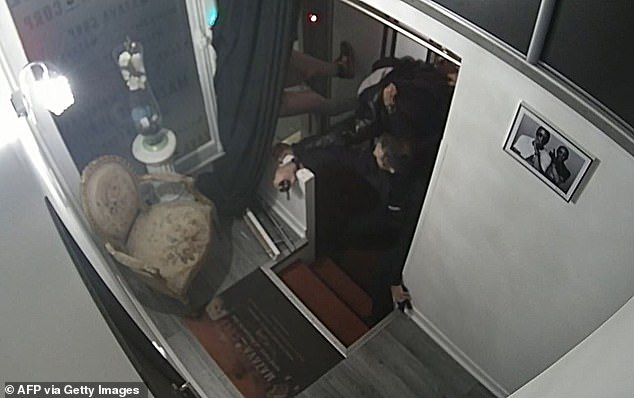 Zecler had been stopped for not wearing a mask and because of a strong smell of cannabis. But only a tiny quantity of the substance was found, his lawyer said.

The protests in Paris saw a brasserie set alight, cars torched and stones thrown at security forces, who responded with tear gas and anti-riot tactics.

Among those hurt was an award-winning Syrian photojournalist, Ameer al-Halbi, 24, seen with a bruised face and much of his head covered in bandages in AFP photos.

Al-Halbi is a freelance photographer who has worked for Polka Magazine and AFP, who both condemned the incident in statements Sunday.

‘We are shocked by the injuries suffered by our colleague Ameer al-Halbi and condemn the unprovoked violence,’ said Phil Chetwynd, AFP’s global news director, demanding that the police investigate the incident. 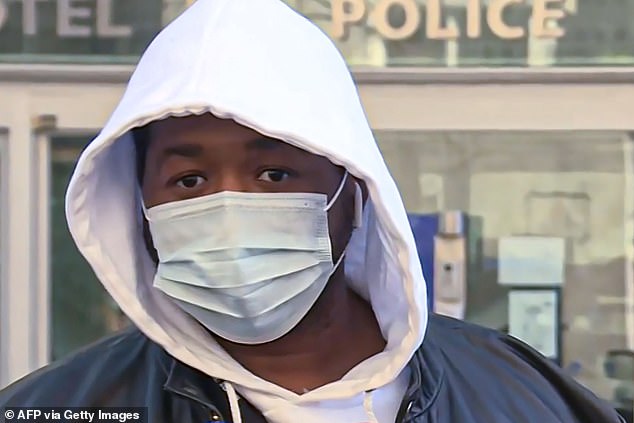 Al-Halbi was unable to get to hospital for several hours, and said he was reminded of being in the Syrian civil war in his hometown.

‘It was Aleppo that came back to me last night,’ he said.

Police said 81 people were arrested at the protests, with Interior Minister Gerald Darmanin saying the violence was ‘unacceptable’.

In a tweet, Darmanin said 98 police officers had been hurt during the protests, adding: ‘Those behind the violence will be pursued.’ 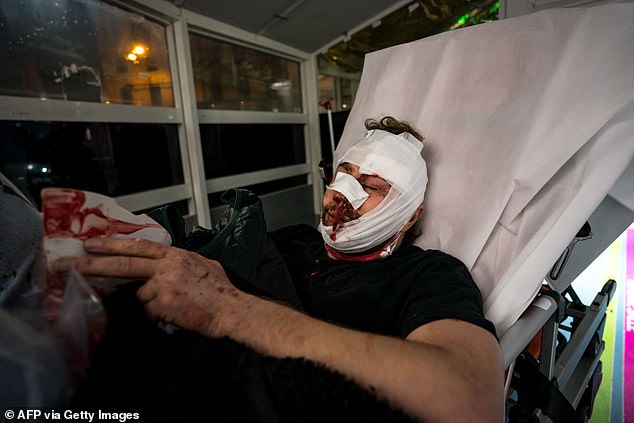 Among those hurt in Saturday’s protests was an award-winning Syrian photojournalist, Ameer al-Halbi, 24, seen with a bruised face and much of his head covered in bandages

Ahead of the charges, the four officers had been questioned by the police’s National Police Inspectorate General (IGPN) on suspicion of using violence and racial abuse.

Heitz said three of the officers should remain in custody ‘to avoid the perpetrators communicating or pressure on witnesses’.

He called for charges of intentional violence, racial abuse and posting a false police report.

The fourth man, who arrived on the scene later and fired a tear gas canister, should be freed under conditions and charged with intentional violence, he said. 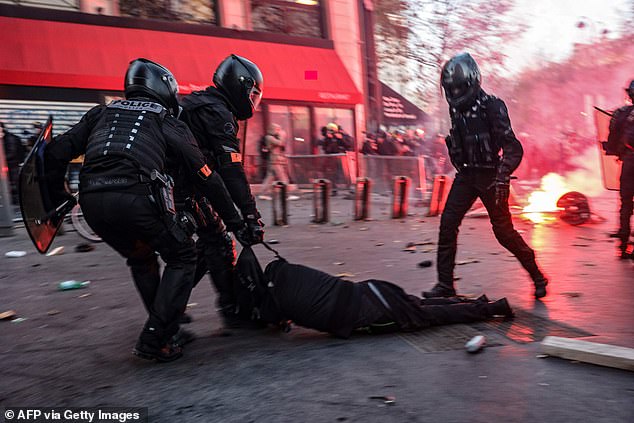 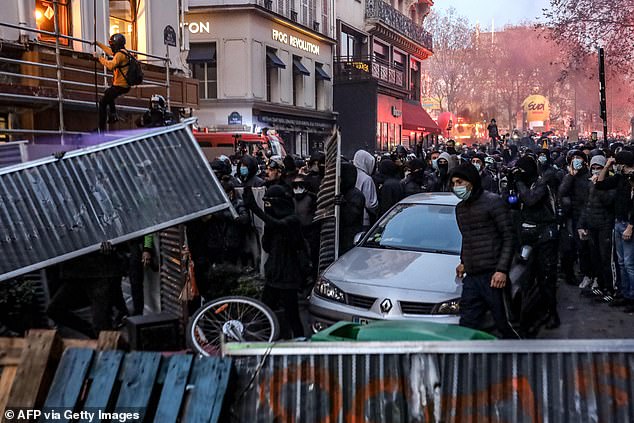 The four officers had a good service record before the incident, he said, and claimed they had acted ‘out of fear’.

Lawyers representing three of the officers declined to comment Monday on the charges.

Commentators say that the images of the beating – first published by the Loopsider news site – may never have been made public if the contentious Article 24 of the security legislation was made law.

The bill would criminalise publishing images of on-duty police with the intent of harming their ‘physical or psychological integrity’.

It was passed by the National Assembly although it is awaiting Senate approval. 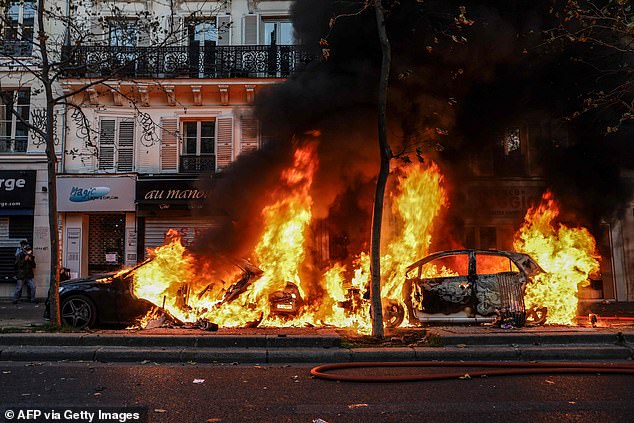 For critics, the legislation is further evidence of a slide to the right by Macron, who came to power in 2017 as a centrist promising liberal reform of France

The controversy over the law and police violence is developing into another crisis for the government as President Emmanuel Macron confronts the pandemic, its economic fallout and a host of problems on the international stage.

Macron said on Friday that the images of Zecler’s beating ‘shame us’ and asked the French government to come up with proposals to ‘fight against discrimination’.

For critics, the legislation is further evidence of a slide to the right by Macron, who came to power in 2017 as a centrist promising liberal reform of France.

But the proposed legislation is being called increasingly into question.

‘Frankly, I am not closed to anything,’ said Yael Braun-Pivet, a member of Macron’s ruling party who chairs the parliamentary committee on legal affairs.

‘We have had times where we have modified or even removed articles,’ he told France Inter radio. 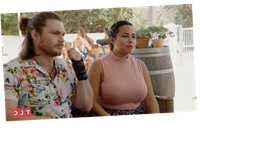