A 5-year-old girl battling cancer achieved her dream of becoming a U.S. Air Force honorary pilot this week thanks to Florida’s MacDill Air Force Base and the National Pediatric Cancer Foundation.

Honorary Capt. Ever Young was given her orders to be a pilot-for-the-day from Col. Benjamin Jonsson, 6th ARW commander, according to a Facebook post by the base on Tuesday.

“Ever was able to make her dream of becoming a U.S. Air Force pilot come true,” the base wrote. 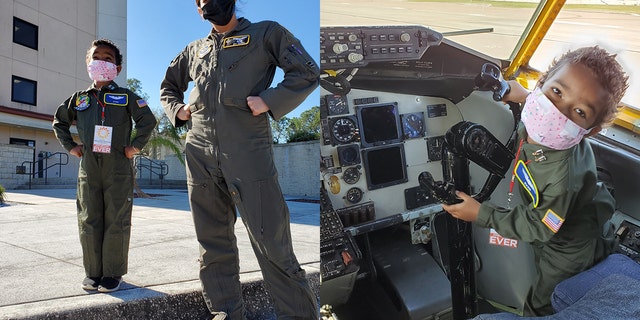 Ever Young is seen living out her dream as an Air Force pilot. (MacDill Air Force Base)

During her visit to MacDill on Tuesday, Young flew and landed a flight simulator. She also toured a KC-135 Stratotanker and the Air Traffic Control Tower.

Photos of her visit were posted by MacDill on its Facebook page.

“What an amazing story! Congratulations to everyone who went above and beyond to give a little girl some joy during a difficult time in her life,” one user wrote.

“These kinds of stories is what our military is all about. Congratulations to all the [sic] men and [sic] women of the 6th AWC MacDill, AFB,” another wrote.

MacDill Air Force Base is located in Tampa, Fla.