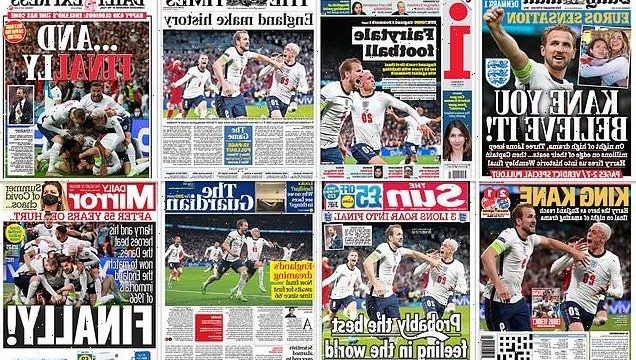 Fleet Street salutes England’s ‘history boys’: Papers wipe out front and back pages to say the team have FINALLY made a final

The UK’s national newspapers have saluted England’s football team for their historic victory against Denmark at Wembley by dedicating their front and back pages to the players who have finally made a major final after 55 years.

Fleet Street have wiped out the pages to include the scenes of jubilation that erupted at the stadium on Wednesday night after Harry Kane scored an extra-time penalty kick, securing the Three Lion’s place in Sunday’s Euro 2020 final against Italy.

Last night’s victory is an historic achievement for England as it seals its place in Sunday’s final against Italy – the most important football game for the Three Lions in 25 years, and the first major tournament final the side have managed to reach since the 1966 World Cup.

The Daily Mail’s front page features a picture of Kane raising his fist to the crowd at full-time alongside elated England fans with the headline ‘Kane Believe It! On night of high drama, Three Lions keep millions on edge of their seats… then Captain Harry fires us into historic Wembley final’.

Meanwhile, The Times, Sun, Guardian and the i Newspaper have chosen to fill their pages with the ecstatic Kane celebrating with teammate Phil Foden just after scoring the all-important goal.

The Telegraph credited the players as ‘the history boys’ on their front page with a picture of the England footballers piling onto each other after clinching the victory.

Here is a look at the front and back pages of the national newspapers: 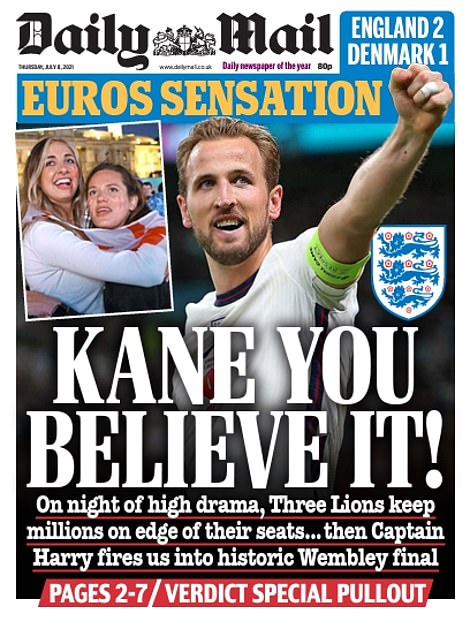 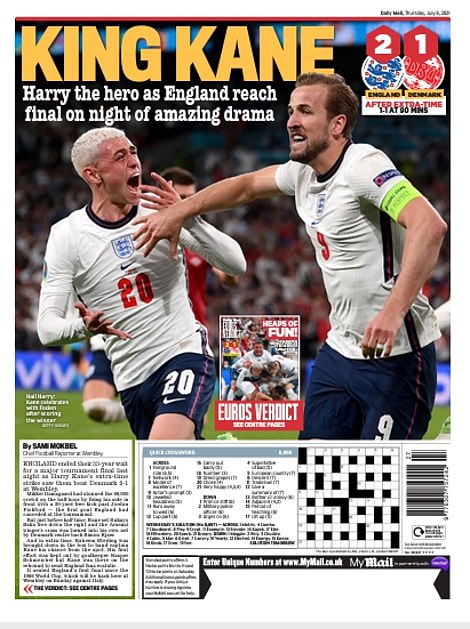 The Daily Mail’s front page features a picture of Kane raising his fist to the crowd at full-time alongside elated England fans with the headline ‘Kane Believe It! On night of high drama, Three Lions keep millions on edge of their seats… then Captain Harry fires us into historic Wembley final’. Meanwhile, the paper’s back page was filled with the jubilant celebration between Kane and Phil Foden (right) with the headline ‘King Kane’ 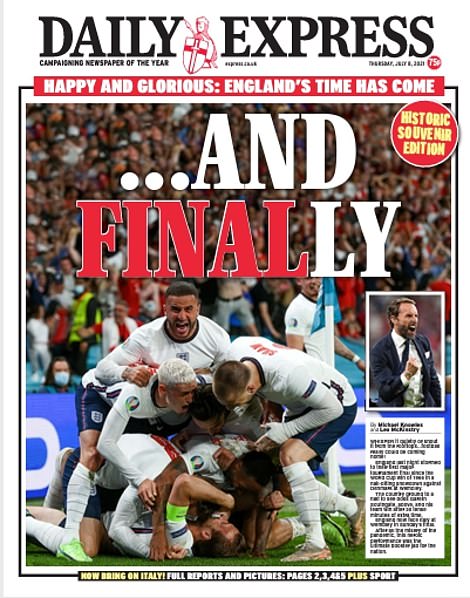 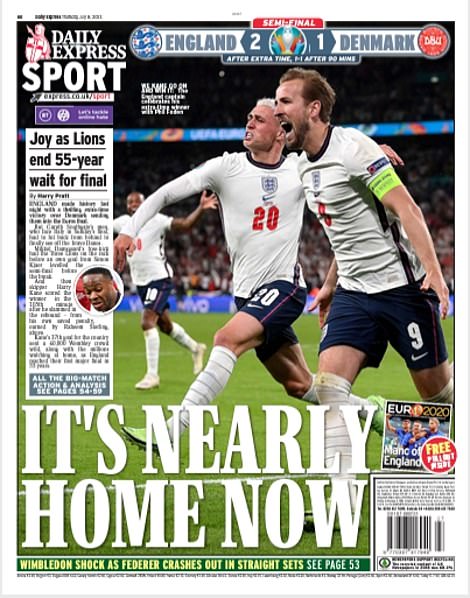 The Daily Express filled their front page (left) with a pictured of the England footballers piling onto Kane after clinching the victory with the headline: ‘And finally… Happy and Glorious: England’s time has come’. Meanwhile, the paper echoed the rest of the country on the back page (right) with the headline: ‘It’s nearly home now’ alongside a picture of a jubilant Harry Kane and Phil Foden 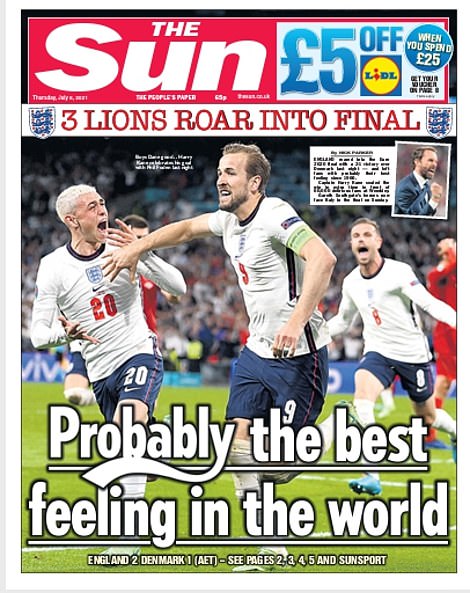 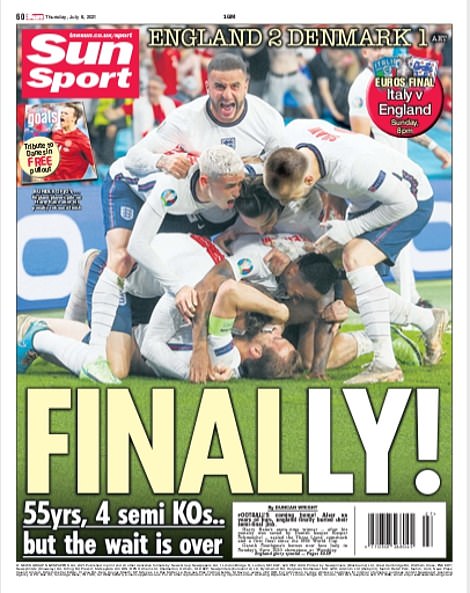 The Sun also filled their front page (left) with Phil Foden looking particularly in awe with Harry Kane after he scored the extra-time goal with the headline: ‘3 lions roar into final: Probably the best feeling in the world’. The paper also wrote ‘Finally!’ on their back page (right) by the picture of the England team celebrating the goal 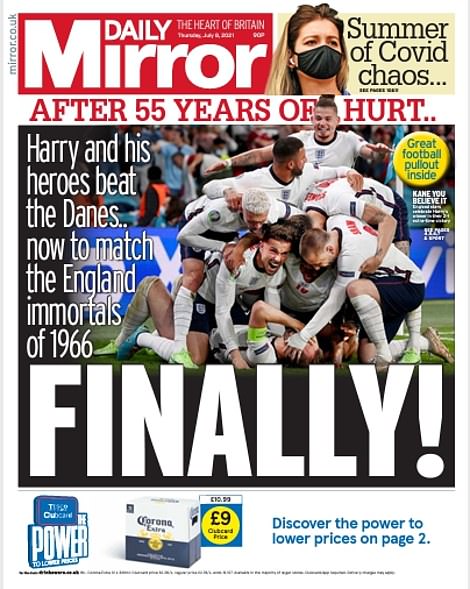 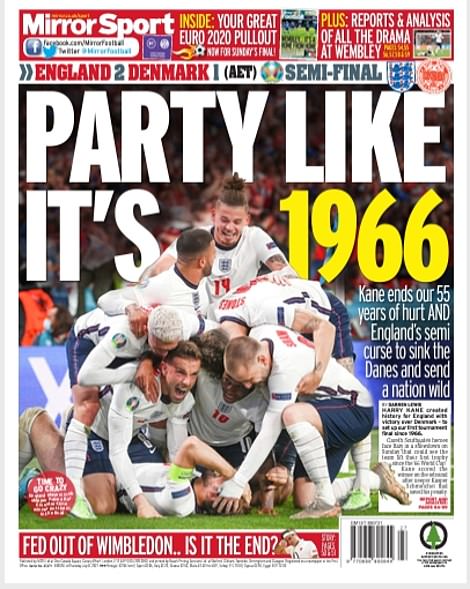 The Daily Mirror used pictures of the England team piling onto Harry Kane after he scored the extra-time goal on their front and pack page. Their front page (left) headline read: ‘Harry and his heroes beat the Danes… now to match the England immortals of 1966’, while they also wrote ‘Party like it’s 1966’ on their back page (right) 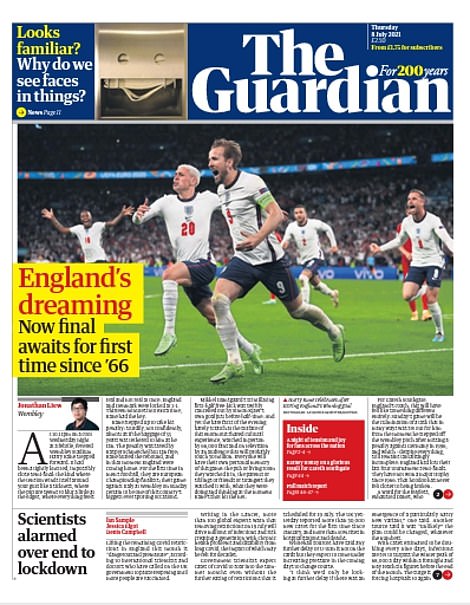 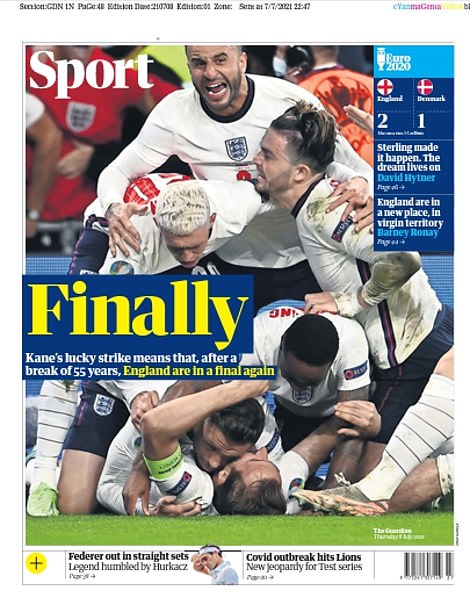 The Guardian also filled their paper’s front and back pages with the entire England team running towards the crowd in celebration before piling on top of each other. The Guardian referenced the millions of England fans who now feel like they are dreaming after the win with the headline: ‘England’s dreaming. Now final awaits for first time since ’66.’ 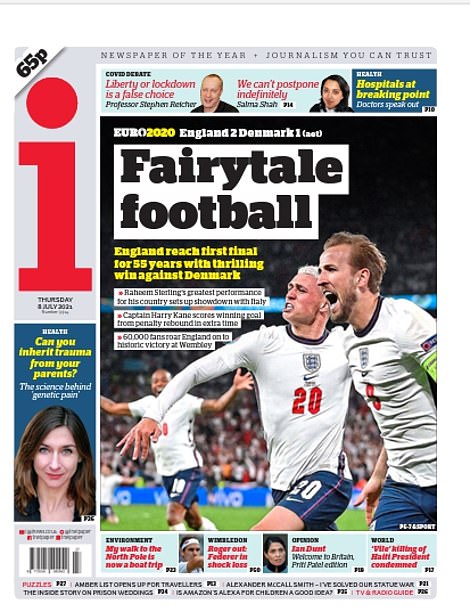 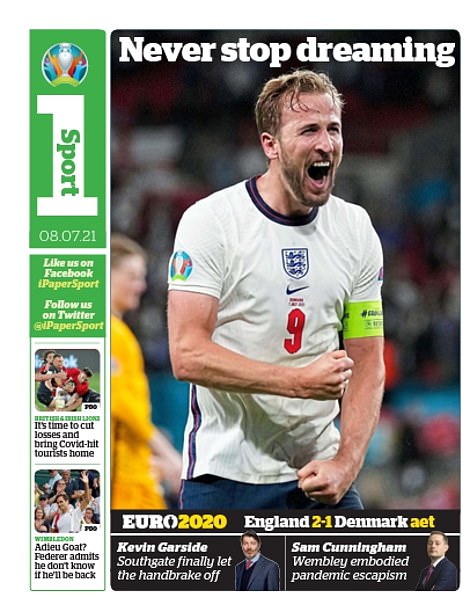 The i newspaper wrote on their front page: ‘Fairytale football: England reach first final for 55 years with thrilling win against Denmark’ alongside a picture of a celebrating Kane and Foden. Their back page was filled with a picture of a thrilled Harry Kane with the headline: ‘Never stop dreaming’ 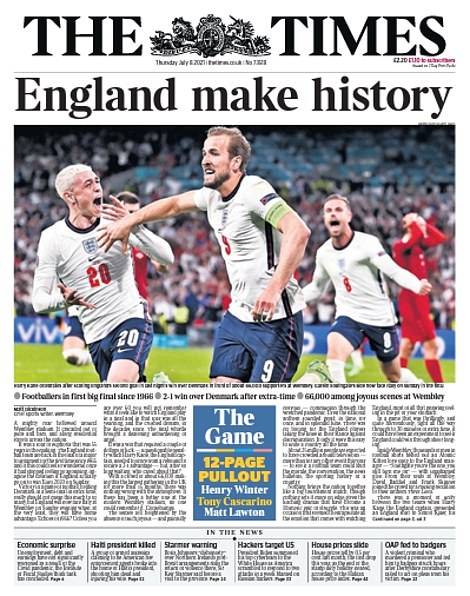 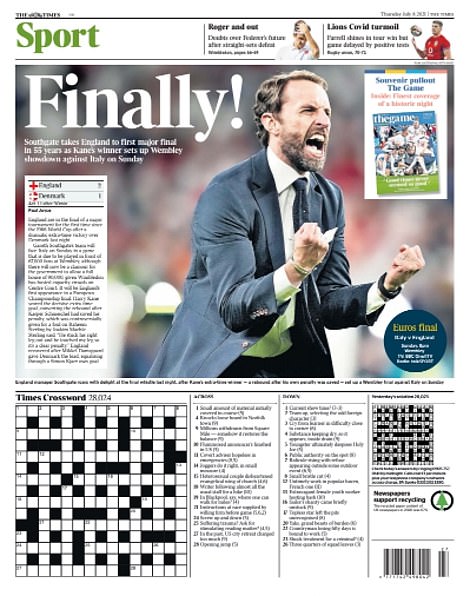 The Times meanwhile included an image of the celebrating England team on their front page with the simple headline ‘England make history’. Their back page is dedicated entirely to their coach Gareth Southgate who is seen raising his fists in the air after watching the goal 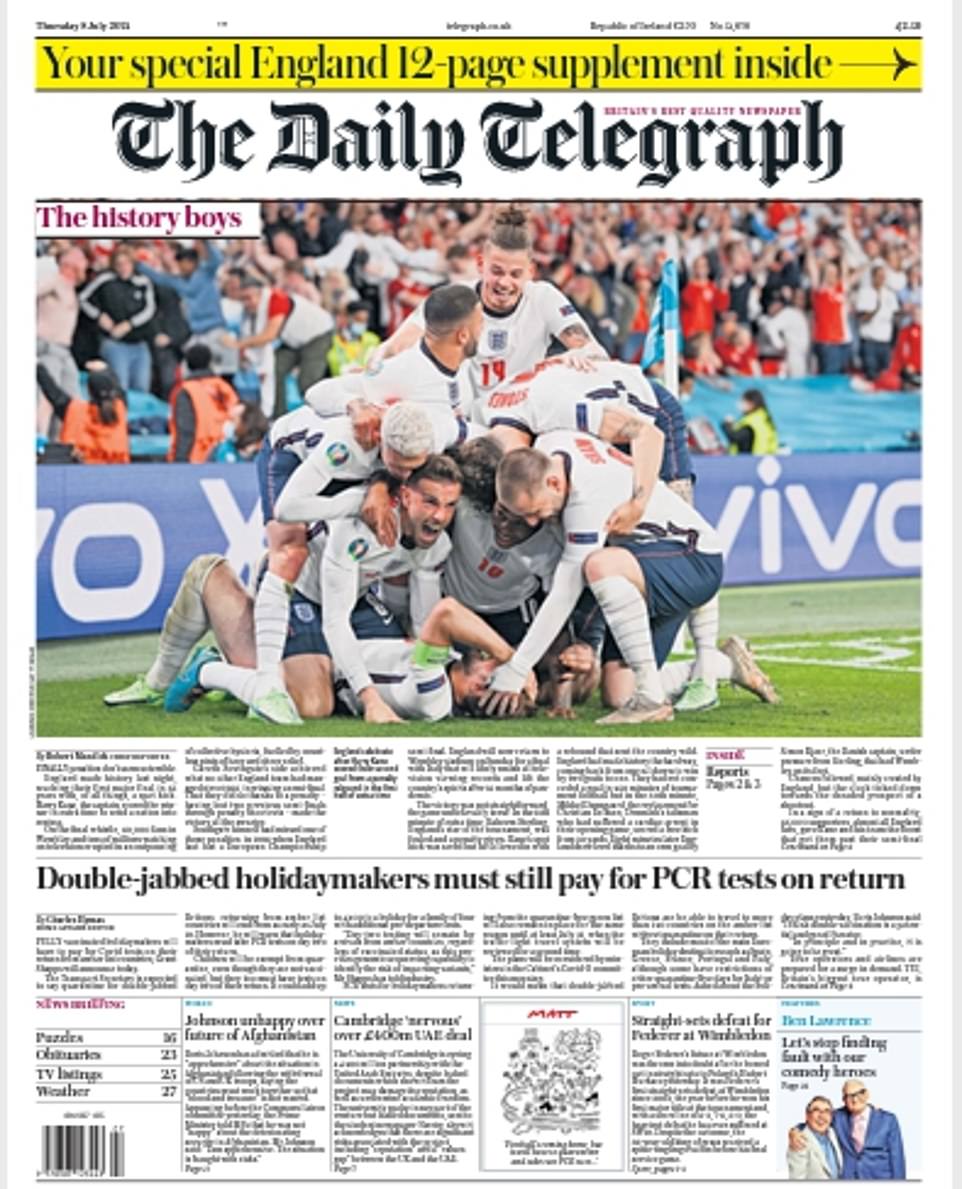