Chicago: After two straight nights of violent unrest, Kevin Mathewson posted a call to arms on the Facebook page of his fledgling militia group Kenosha Guard.

Formed in the days after George Floyd was killed by police in Minneapolis, the page boasted only 87 likes. But Mathewson, a former local councillor, had success with his post on Tuesday asking for "patriots willing to take up arms and defend [Kenosha, Wisconsin] from the evil thugs."

Within about four hours, some 1000 people responded they were "going" to the Kenosha event. Another 4000 said they were "interested". 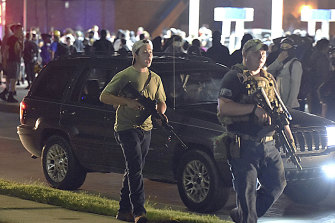 Kyle Rittenhouse, left, with backwards cap, walks along Sheridan Road in Kenosha, Wisconsin. Prosecutors have charged the 17-year-old with the killing of two protesters and the wounding of a third.Credit:The Journal Times/AP

Later in the day, Mathewson, an assault-style rifle visibly strapped around his chest, posted a 15-second clip of civilians gathered near the courthouse. That night, police say a civilian with an assault-style weapon shot and killed two men and wounded another as armed vigilantes patrolled the streets during yet another violent night of protests following the police shooting of Jacob Blake.

Police have released no details of the shootings, and there's no evidence that a 17-year-old suspect taken into custody was led to Kenosha by the Facebook post. Mathewson said he does not know the suspect, Kyle Rittenhouse of Antioch, Illinois, and knows of no communication with his group.

But city and law enforcement officials have blamed the armed vigilantes who showed up on Tuesday night for worsening tensions and sparking unnecessary confrontations. Mathewson says he was only trying to protect his city. 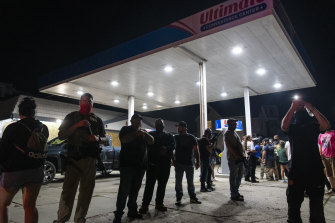 A group of armed individuals stand in front of Ultimate Convenience Centre in Kenosha during a protest over the shooting of Jacob Blake on Tuesday.Credit:Chicago Sun-Times/AP

"In my view, when the government can't protect us, that's when we rely on the Second Amendment, which is in place just for these circumstances," he said on Thursday. "Our city was under siege, we were under attack and the government could not ensure our safety."

That's not how Facebook sees it. The social media giant has taken down the Kenosha Guard's page for violating its "dangerous organisations" policy. Rittenhouse, who is facing murder charges in connection with the Tuesday night shootings, had his Facebook and Instagram accounts taken down and the company will temporarily prohibit anyone from starting a new account in his name.

Brian Fishman, who oversees Facebook's dangerous organisations department, also posted a thread to Twitter about the situation, saying: "None of the shooter's accounts were reported by users prior to the shooting."

Mathewson's personal account was also removed without notice and he was effectively banned from Facebook for life in connection with the policy, which prohibits organisations or individuals that declare a violent mission or are engaged in violence.

"He will not have been warned and [we] will not allow people who are banned under our dangerous orgs policy to have a profile," a spokeswoman for Facebook said in an email.

Facebook also looked into any obvious links between Mathewson's post and the arrival of Rittenhouse in Kenosha.

"At this time, we have not found evidence on Facebook that suggests the [suspect] followed the Kenosha Guard page or that he was invited on the Event Page they organised," the Facebook spokeswoman said. "However, the Kenosha Guard Page and their Event Page violated our new policy addressing militia organisations and have been removed on that basis."

The policy was announced August 19 and comes after a northern summer of vigilante clashes during protests following Floyd's killing at the end of May.

"We've had too many tragedies like those in Kenosha. Companies like Facebook owe it to everyone to closely examine the influence of online content on such violence – and to take action to stop it," Fishman wrote.

Militia-style groups patrolled the streets of Minneapolis in the weeks after Floyd died. In Albuquerque, a person was shot and seriously wounded in June during a clash between protesters and a group called the New Mexico Civil Guard.

After the shootings in Kenosha, hundreds of people made clear they would like to see Mathewson face a much harsher punishment than losing his Facebook page. A petition circulating online demanding that Mathewson be charged as an accessory to murder had 1650 signatures by Thursday.

Mathewson, a private investigator, said he has also been the target of death threats.

In an interview, Mathewson said he wouldn't go so far as saying he regretted that so many people came from outside his community to guard it, saying it wasn't his intention for the response to grow so large.

He said the posting was written up by the alt-right website Infowars run by Alex Jones, known for his conspiracy theories. Mathewson, in turn, said he promoted the Infowars article on the Kenosha Guard page, as a way to note the "event" was getting national media attention.

Soon, he started getting hundreds of messages of support from all over the world, as far away as Australia and New Zealand.

On Thursday, Mathewson said promoting the Infowars article was a mistake. "It certainly wasn't my intention to attract people from outside the community, let alone the state," he said.

He also acknowledged that the Infowars site is "not very credible".

Mathewson said he made the post an "event" on Facebook but he hadn't planned logistics for something so large. He said he didn't have walkie-talkies or issue assignments or coordinate the turnout, other than suggesting people "go to the courthouse".

Before returning to his neighbourhood, where he spent much of the night posted at a subdivision entrance with a small group, Mathewson himself was there, standing with other openly armed men in a park as curfew neared. At the time, Mathewson told a reporter he was there to "lend support to the good guys."

Soon, he started getting hundreds of messages of support from all over the world, as far away as Australia and New Zealand.

Kenosha Police Chief Dan Miskinis appeared to agree, saying Mathewson and the others were out to protect property and "exercise their constitutional right".

Kenosha Mayor John Antaramian disagreed, saying such groups only make the situation worse. "No, I don't need more guns on the street in the community," he said at a news conference the day after the shootings. 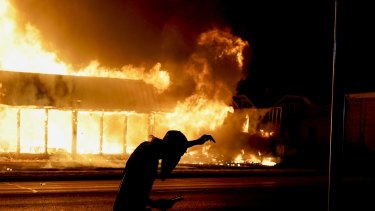 A protester walks past a building set on fire during protests against the police shooting of Jacob Blake in Kenosha on Monday.Credit:AP

But Mathewson responded that the mayor had failed to protect the city. "If I was an officer getting Molotov cocktails and rocks thrown at me, I would be scared out of my mind," he said. "For them to say, 'We can handle it,' is disingenuous and reckless. It's putting politics ahead of safety and common sense, in my opinion.

"Here in Kenosha, I can smell burning rubber and I can see the building in front of me, the probation and parole building in a big pile of ash and debris," he continued. "We're at war, we're being invaded."